I recently posted the first part of a blog talking about some of my favorite LEGO vehicles from Superhero sets. Though I've never really been a car kind of guy, there are some pretty fun ones that come in LEGO's Marvel and DC lines. As I stated in the previous blog, part of that is because some of the vehicles are iconic, straight from the comics or other supplemental material (movies, TV shows, cartoons, etc). A lot of the reason why I like these specific vehicles, however, is because of my ability to use them. The fact they don't have to be exactly what they were built to be, the ways I can use them in stories, and the idea that I can throw them around and crash them, like what would result in an actual superhero/supervillain battle. They're fun toys and add a layer to the playing that other toys—like action figures—can't achieve as often. With that, let me head into my Top 5 favorite Superhero vehicles. 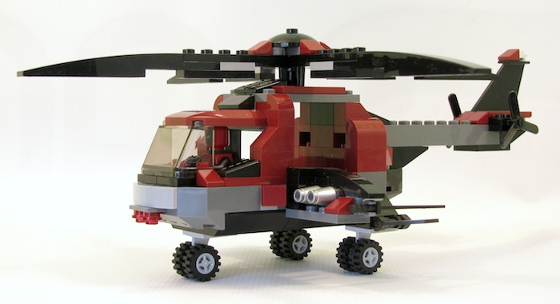 Why: This came in a set with a couple of great minifigures—Wolverine, Magneto, and Deadpool—plus a motorcycle for Wolverine, but the helicopter is the better of the two vehicles. The blades spin nicely (but sadly break off all the time), and the characters can fit snugly into the cockpit and back area. There are four flick-fire missiles along the side, which is a really nice number, considering most of the vehicles I have with that kind of missile only fire two. Though the blades break off easily, the entire top can pop off, which leads to a nice feature of the whole thing: destruction. Parts can easily be taken off and assembled quickly, leading to quite a number of helicopter crashes. Whether the Hulk sails through the air and brings down an army chopper, or a news crew gets stuck in the middle of a fight and need to be rescued, the helicopter allows for various scenarios where heroes need to save the day. Yes, it's Deadpool's chopper, but the lack of decals means I can make it whoever's I want. 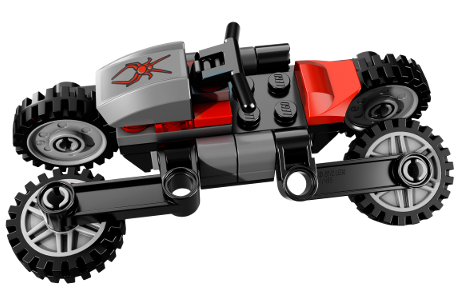 Why: Yup, Spidey has a bike. Why? In the cartoon this cycle is based off, he shoots web-lines from the front and back and can ride on those…and then the thing can also fly. If there's one overpowered vehicle on this list, it's this one. A bike that can fire webbing and fly seems like a great tool for Spidey, except for the part that he already his personal mode of transportation via physical web-slinging. Like the Green Lantern jet I wrote about in my last blog, this seems a little pointless. However, like Deadpool's helicopter, I kept the decals off and allowed it to become a generic flying bike. Cause why should Spidey be the only guy who can ride a flying bike? There are plenty of superheroes who should be able to get around in the air who typically can't fly. The bike is sleek and allows you to flip the wheels out to transform it from bike to air-bike mode. It's fun to be able to make it take off, sail around, and then scream back to the ground, allowing a bumpy landing before speeding down the road. It also reminds me to the Bat-bike Batman uses in The Dark Knight, so now Batman can careen through Gotham in a whole different way, too. Cause the guy needs a flying bike on top of a Batmobile, Batplane, Bat-jet-ski, Bat-glider, Batboat, Bat-cycle, and Bat-swamp boat… 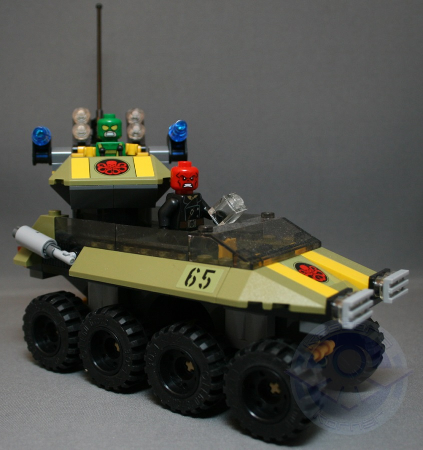 Why: This thing is all muscle. And this vehicle has a specific purpose: be Hydra's principle method of charging into battle, flattening anything that gets in its path. It's got a heavy, armored body that can withstand anything up to a Hulk fist, and a nice rotating turret for a goon to twist around and rain flick-fire missiles down on Hydra's super-powered enemies. Eight huge tires allow for it to plow ahead and crush anything that gets in its way. Two great things about this vehicle: one, it's intimidation factor is huge with its large tries, armored body, missiles, and sheer ability to be unstoppable. Two, it's littered with detail, from headlights, to turret lights, to an antennae, to stickers. Unlike other vehicles, this is strictly a Hydra tank, for Marvel's premier terrorist organization and for them only. Nobody but Hydra soldiers piloting this monster. Yes, it doesn't allow for much imagination, but like the Necrocraft, it gives me a vehicle to mass produce to arm an entire legion of green-suited Hydra goons. Imagine a whole army of thugs charging a band of united superheroes. Now imagine those superheroes kicking the snot out of said army, knocking them around and trashing their high-powered tanks. That's the level of fun this tank brings. 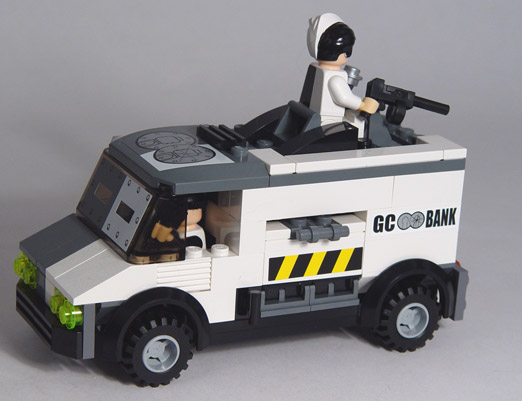 Why: This vehicle comes from the same set as my Batmobile, which was at the very top of my Top 10 list, so it's interesting that two vehicles from the same set sort of serve as bookends for my entire list. Maybe, like the Batmobile, it made the list for more sentimental reasons, but the truck itself is pretty fun. I love that it's divided into a gray and white side, representing the two sides of Two-Face himself, the good and the evil constantly at war. Two guns flip down from the sides of the truck, letting Two-Face fire at the Batmobile; since there are no actual missiles or bullets, however, aiming at Batman's car is up to my imagination. Batman, on the other hand, can shoot Two-Face's truck and send him sailing with a mechanism in the back that shoots him off the roof (why's he on the roof of the truck, anyway?), which I always found sort of annoying. What if I want Two-Face to stay there on his perch, right at the height where he could bash his face into lights and traffic signs? That was fixed by taking off the smooth brick he sits on. No biggie that can't be solved by some LEGO ingenuity. Nice, sturdy truck, like the Prisoner Transport vehicle, that can drive away easily and engage in combat with enemies. But, like the Batmobile, this truck helped start in all, so, like my Batman minifigure, that's why it's earned this spot at number 2. 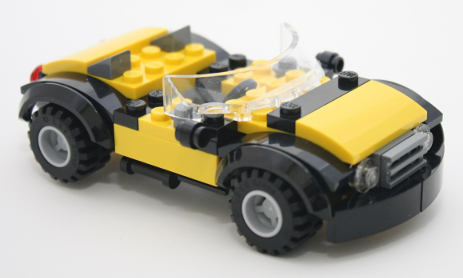 Why: Number 1 on my Top 10 list is a, perhaps unexpected, seemingly random yellow car. Not some vehicle inspired by comics, movies, video games, or cartoons. While it's from a Man of Steel set, I'm not sure why the designers included this choice of vehicle, but I'm happy they did. Like a bunch of other vehicles that made this list, its absolute greatest asset is that it's totally, completely, utterly generic. No one has dibs on this thing, which means everyone has dibs on it! When a villain is rampaging through New York, Gotham, or Metropolis, citizens have to drive out of the way; when objects are needed to be thrown in pitched combat between heroes and villains, a lot of yellow cars suddenly appear; when Bruce Wayne or Tony Stark realizes that driving the Batmobile or flying in as Iron Man isn't practical for a billionaire businessman, they pick the yellow convertible. It's got a thousand uses, meaning it's the most easily accessible vehicle in my arsenal. I can use it for virtually any scenario, have it be in any city, crash it in any way. It's like the Emmet Brickowski of my collection, so generic that its being generic is actually what makes it awesome. Yeah, maybe it isn't special in the sense that it's iconic, but it's just fun to use. Hence why I have it listed in this number 1 slot.

Like with my action figures and LEGO minifigures, I've now gone through and listed my Top 10 vehicles, all superher-related. Honestly, LEGO's Superhero line is probably one of the best things going for it now. Great sets, great characters, great buildings and vehicles. Lot of fun to pop minifigures into these things and have them zoom around, whether on the road, in the air, through space, or over sea. As I said, it gives another layer to playing with LEGO that other brands of toys aren't able to pass on. Fun to assemble, fun to use. Minifigures and vehicles combined have kept LEGO going for a long time, and it's good to see they'll be combining forces for a while.