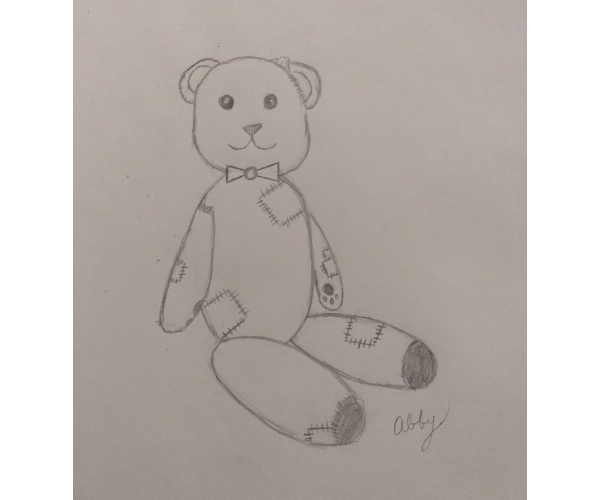 The beeping continued. Every second and every day, it continued. Never stopping. However, the teddy bear in the corner had grown used to the beeping and so no longer heard it. He was a well-worn teddy bear. The brown fur on his body either matted or gone. His arms and legs floppy because of a lack of stuffing. Small round ears were plopped on his large head and patches covering up different holes. But even though he was worn, his eyes still twinkled. This teddy bear was watching over his master, like all good stuffed animals do. Even though his master was as worn as him; the teddy bear still loved him. Every night the teddy would clamber onto him master’s bed. Making his way over the many strange wires attached to the old man. He would sit next to his master and tell him of the many adventures they had been through together. Like the time when they fought off aliens or when they rescued young maidens from perilous situations. After the story, the teddy bear would look at his master’s closed eyes hoping they would open once more. Then the sun would rise, and the small bear would make his way back to his corner. There he would watch over his master as he lay there on the bed.

Many strange people came into the room to visit his master. Among the unknown faces, there were also some family members which he would recognize. The teddy bear especially loved it when a little girl came in, a smile was always on her face. His master had showed Wilbur to her many a time, telling her of different adventures the two of them shared. During her visits, she would wonder over to his master’s side and hold his hand. Then the guests would eventually leave, and the teddy bear would be alone again with his master, and the cycle would continue. Day and night. Over and over again. But one night was different. Like usual the teddy made his way over to his master. The little bear stopped for a second to think of a story. While he was doing so, he looked at his old master’s eyes to find that they had opened just a little. The old man weakly grasped his worn teddy bear and brought it close to him in a tight hug.

“Little Wilbur,” the man whispered into the bear’s round ears, “You have been so good to me. I have one last adventure for you,” The master coughed, causing his body to shake, “It’s a long one, full of many missions. You will love it.” The teddy bear wiggled out of the hug, grabbed his master’s hand, and walked towards the foot of the bed. However, this time the hand did not move with him, instead it slipped out of Will’s grasp. The worn bear looked back at his master.

“Aren’t you coming?” he asked. His eyes twinkling with joy. The old man took a labored breath.

“No. You must do it alone,” said his master. The little bear wandered back over to his old master. “Protect my little princess. My granddaughter. Take her on an adventure.” The teddy bear curled up on the old man’s chest and whispered the promise all teddy bears make, “I promise to comfort you when you are scared. I promise to make your scrapes and scratches feel better. I promise to wipe away your tears when you are sad. I promise to protect you from monsters under the bed. I promise to listen to your stories. But most importantly, I promise to take you on adventures and stay with you to the end.” The master placed his hand on his teddy bear. “I love you.” A smile flickered across the master’s face and both were soon fast asleep.

The little bear blinked his eyes. The sun peeked in through the curtains. The teddy bear gently removed his master’s hand and made his way to the end of the bed. The teddy stopped. Something in the room was different. He looked around. Everything was still in place. The wires were still connected to his master. The furniture was still in their original spots. Nothing had moved, but still something was off. He twitched his ears trying to pick up any sound, but he heard nothing. No labored breathing, no rough coughs, and no repetitive beeping. His head slowly turned to look at his master. The man was still. The worn bear crept his way to his master’s hand.

“Master?” Wilbur asked, placing his paw on the palm of the wrinkly hand but there was no response, “Come on Timothy, it’s time to go.” The bear gently pulled on his master’s hand, but there was no response. Wilbur pulled even harder until his paws slipped, and he flopped down. “Please master, just one more adventure together—” A tear escaped the bear’s black eyes. “—we could be pirates or superheroes. Or we could also pretend to be young again.” Wilbur clambered onto the old man’s hand. He looked at his master’s worn face. The door behind him softly creaked open causing Wilbur’s heart to jump. The bear looked over his shoulder to see his master’s granddaughter. She no longer had her beloved smile. Instead, her face was filled with worry, confusion, and sadness. Wilbur looked back at his master and whisper, “I promise I will take her on the greatest adventure.”

For one last time, the old bear clambered his way over wires. Every now and then wiping tears from his eyes. Eventually, Wilbur stood in front of the young confused girl. The old worn bear got down on one knee and looked into her eyes, “May I take you on an adventure?” The little girl nodded as tears slowly rolled down her cheeks. She then lifted the bear up and gave him a gently hug. Wilbur wiped her eyes with his paw and whispered the promise all teddy bears say, “I promise to comfort you when you are scared. I promise to make your scrapes and scratches feel better. I promise to wipe away your tears when you are sad. I promise to protect you from monsters under the bed. I promise to listen to your stories. But most importantly, I promise to take you on adventures and stay with you to the end.” As the little girl started to leave the room, Wilbur looked back at his master one more time and whisper, “Goodbye old friend.”