Wisdom From the Mountains: Breakaway 2016 - Part 1

Over Spring Break, I had the privilege of venturing with a group of North Central College students to the Appalachian Mountains in West Virginia and serving with Habitat for Humanity. In complete honesty, I had several doubts leading up to the trip. Though I’d attended a mission’s trip with my church’s youth group the previous summer, the thought of this upcoming journey was daunting and filled with questions. Would I be of help? Would I connect with people? Would the community we were heading into be safe, being mountainous and on the poorer side of American cultures? And aren’t there more comfortable, more self-fulfilling activities that I could be doing over my Spring Break instead of working every day for people I don’t know in a state I’m unfamiliar with?

The answer to all of those questions? A resounding yes.

That does, of course, sound funny when applied to the last question. I mean, heck, yes, sleeping in and playing videos games and writing stories would’ve been more comfortable and self-fulfilling for me. That’s where my heart wrestled with itself. However, I’d made a commitment, and my mom loves reminding me about how I need to be a man of my word. So I went, a little reserved, a little doubtful. And, despite my initial fears, I had an incredible time. I did some good work, made some great friends, and created some everlasting memories.

In honor of this trip, I’ve decided to compile some lessons I learned, many of which can be seen in lines that I’m quoting directly or indirectly here. We ran into some wise people over the course of our adventures in West Virginia, and we were also able to learn a lot during the activities and tasks we undertook. I wasn’t sure of what to expect. What I’d do, how I’d be affected by this trip. But I was affected, I was changed, and maybe some of that can be seen below.

“Hills are easier to climb than mountains.”

This definition for an apparently predominant difference between hills and mountains, given in the greatest sophistication and spirit of wit by the National Geographic Society, shows me that we were definitely not in hill country in West Virginia. We were surrounded by these imposing stone giants that looked beautiful no matter when or where you saw them. Whether they were illuminated by the sun or blanketed by nighttime darkness, whether they were clothed in trees or laden with snow, whether they were inhabited by no one or touched by houses and roads, they were staggeringly beautiful. While I realized the Appalachian Mountains is an area I would not choose to live in, I also knew that I would never get tired of looking at these impressive faces of rock. 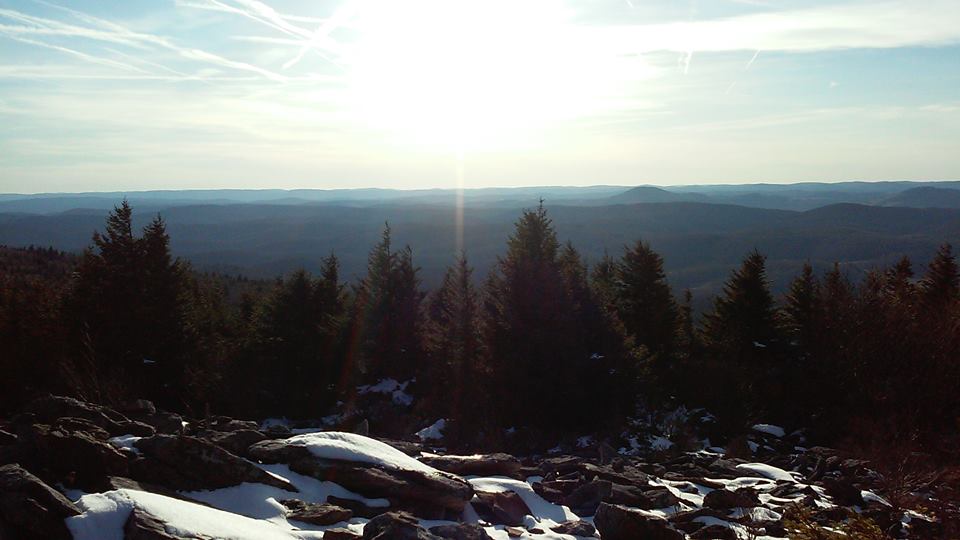 Fantastic view off the side of Spruce Knob.

Being driven through the mountains every day as we headed back and forth from our work sites, looking at these mountains from both far below and high above, I was given a rare perspective of God’s creation that I had never held before. It took us approximately an hour or so to drive to and from our work sites daily, but it never got boring, not with the view we had. I learned to appreciate an area of the world I had never seen before, I saw a whole different facet of creation I had never perceived. C.S. Lewis talks about feeling “Joy,” a feeling akin to wonder. I don’t know if I felt his definition of “Joy” exactly, but I'm sure that it was pretty darn close.

This quote, directly taken from one of the guys who attended the trip, was a remark made as our group sat amongst the stones on top of Seneca Rocks, a massive rockface that is easily distinguishable from the rest of the mountains in the area and one that we decided to climb as one of our fun activities of the week. There are apparently various ways to climb Seneca Rocks, but we decided to take the “easy” path. I say “easy” with a hint of sarcasm and the use of double quotes, because I’m pretty sure these paths are not named by people with zero rock climbing experience. The path we took was not the sheerest by a long shot, but it was pretty steep and consisted of a trek up the side covered in trees and rocks and inhabited by at least one lizard that everyone gave one name but I decided to call “Curt.” Now, I am not the most athletic person in the world, and I typically shy away from certain athletic games or feats. Maybe I complain, maybe I quit in the middle. However—and I don’t know if this was because I was part of a group or if it was a God thing or what—but I felt none of that with this climb. Yes, it was really difficult and got my lungs and heart working overtime, but there was never a point where I thought about quitting or about stopping for an overly extended rest. I made it—we made it—and the spectacular view waiting for us was absolutely, totally worth the sore hands. 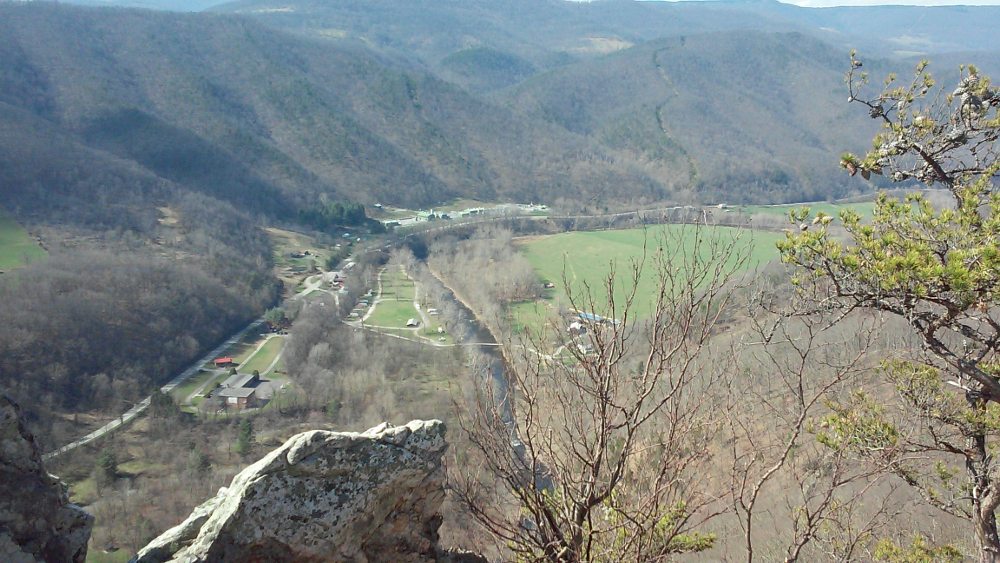 Literally on top of the world, glancing down from Seneca Rocks.

Mountains stretched out farther than my eyes could see; little vehicles rolled over the roads like toys; a couple hawks hung in the air, practically floating by us like animals on a baby mobile. Amazing. We sat there for about half an hour—I propped my feet up on one rock and leaned my back against another, creating one of these natural “chairs” for myself—enjoying the view and each other’s company. If I were to pick a singular moment that I could define as the best of the trip, this is it. Now, I don’t know how God’s mind worked when He created the world. Did He mold Seneca Rocks the way He did knowing we specifically would be there, climbing them and sitting on them? Or did He make the mountains as they are because they look beautiful and that having future generations climb them was a bonus? I don’t know what went through His head when He breathed these particular mountains into existence, but I’m so glad He made them. They’re spectacular.

And the trip down? Much easier, thank you.

Considering the length I've covered already, Part 2 contains the rest of the story about this trip.