An unsatisfying conclusion, fortunately, does not wholly detract from an engaging, original Spider-Man graphic novel 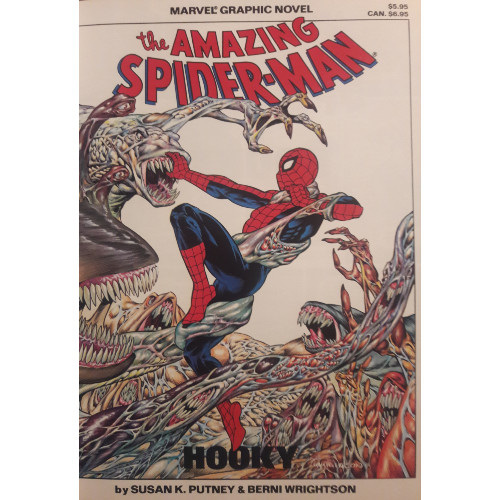 It’s quite possible that you, dear reader, are familiar with the eternally-young, fictional hero Peter Pan. Whether it’s via the original J.M. Barrie novel, the animated Disney movie, the Peter and the Starcatchers series, the unofficial Robin Williams/Dustin Hoffman sequel Hook, or the myriad of other adaptations floating around the pixie dust-sprinkled ether, you perhaps recall some version of the whimsical adventurer, his miniature fairy friend, his British compatriots, and his hook-handed arch nemesis. He’s the boy who wanted to never grow up and, thus, never did.

Spidey encounters a similar situation in this graphic novel (a part of the oversized Marvel Graphic Novel imprint) when he comes across a young girl who, for some odd reason, never ages. She’s never visited Neverland, as far as I can tell, nor has she ever come across any fairy dust. She just doesn’t age. Two problems with that.

First, she wants to. She’s desperate to grow older, mature, see the world through the eyes of an adult instead of a child.

Second, there’s a monster on her tail that appears destined to kill her before she gets the chance to break whatever curse is keeping her youthful and perky. Yeah, that one’s a bit of a hairier conundrum. Sounds worse than acne. 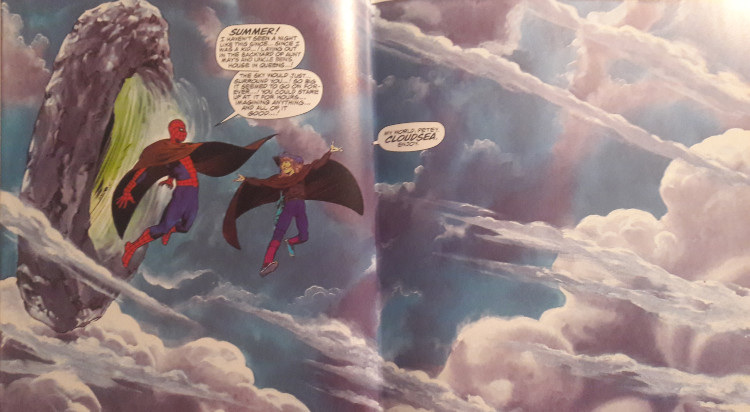 The story starts as several Spidey tales do. Our intrepid hero runs afoul of a gang of crooks and solidly cleans their respective clocks, breaking their delicate facial timepieces with his fists as one does (a wonderful gag has one crook telling Spidey off-panel that he “can’t hit me through this garbage can lid!” followed by a loud SKRONK! sound effect as Spidey does exactly the opposite). After tussling with the ne'er-do-wells, Spidey’s approached by a young girl named Marandi Sjorokker, the daughter of a wizard and a girl who seems to know Peter is Spider-Man; she used to deliver newspapers around Forest Hills when Peter was younger and, thanks to her magical abilities, can read his “aura.” Specifically, she says she put two-and-two together because “worry ripples all over” his aura, which I feel is a hilariously accurate portrayal of both Peter and Spidey. Is it highly coincidental that Marandi just so happens to have been connected to Peter previously and can tell that he and Spidey are the same dude? Yes, enormously. I feel somewhat justified in "sinning" Putney for this little use of coincidence to get the plot rolling, particularly as the "Marandi knew Spidey was Peter" plot point never carries over into the rest of the story. Regardless, there are worse ways of pulling your hero into the main adventure.

Spidey soon becomes embroiled in an adventure of other worlds, flying boats, and mutating monsters that don’t seem to know when to quit hunting their prey. Mandi (as she calls herself) brings Spidey up to speed on her history--cursed to never grow up and become an evil adult wizard like her father was, Mandi has spent a lot of time on earth, jumping from foster home to foster home. But she cannot escape her father’s past, nor the monster she believes her father’s enemies have sicced on her. All she knows is there’s a creature that exists solely to kill her--the Tordenkakerlakk, otherwise known as the Thunder Cockroach or Spindrifter’s Bane, which is what I’m going to call it because that’s darn easier to spell.

Mandi becomes an interesting character throughout the story, giving us and Spidey someone to sympathize with and stick around for. Putney really portrays her as someone you don’t want to see murdered by the Thunder Cockroach (not that I’d want to see anyone murdered by a Thunder Cockroach, but for the context of this story, I’m singling her out) by giving her an innocent yet fierce personality. When most kids might want to stay their current age, or when most adults would yearn for days of youthfulness, Putney gives us a 219 year old girl who, physically, has been stuck at age 12 for far too long. Think Five from the Umbrella Academy. Years of rotating foster homes (and, geez, while it’s never mentioned, think of all the nutty historical events she’s lived through) have taken their toll, ground her down. She just wants to grow up.

Spidey’s determination is a little less invigorating at first; he asks Mandi if there’s another route, a way out of this mess that doesn’t involve them facing this monster. He doesn’t ask because he’s scared to face the Cockroach but because he’s concerned for her safety. This changes, however, and while he does his darndest to keep Mandi safe, he also knows that facing this ever-changing beast is the best way to do that. As the story progresses, Spidey comes more fully into his role as protector. As a character, Spidey's at his best when he's forced to adopt a protective, heroic role outside of his comfort zone. Though he never becomes a "fatherly" type figure for Mandi, Spidey certainly develops an affection and protectiveness for her, and Putney crafts this relationship nicely. 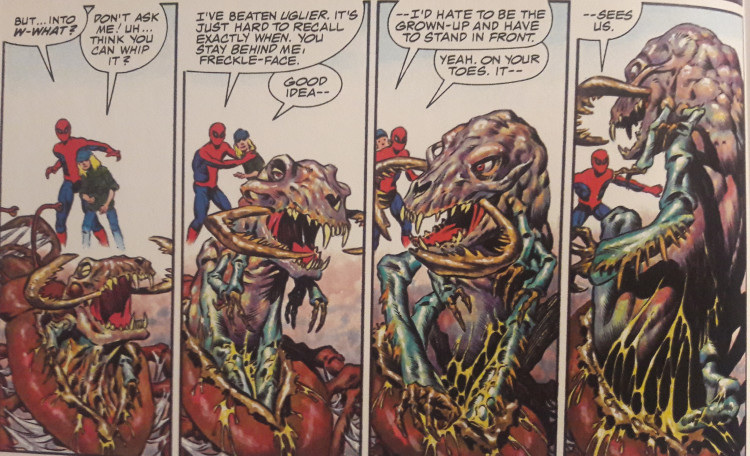 When it comes to Spindrifter's Bane, Berni Wrightson’s art depicts this monster in its full horror. He gives us a larger-than-life cockroach, as the name implies, before having it grow into an even bigger bug with pincers, a long-headed dragon-esque serpent, a lumbering beast with bulging muscles, an actual dragon with flaming breath, and a final, horrid mass of flesh, arms, and teeth that strains against classification. Full-page images break up the text, allowing Wrightson to pour on the details with the Cockroach; as Spidey becomes tinier and tinier, the monster becomes more magnificent and deadlier to our two protagonists. Anyone starting off this story going “What’s a cockroach going to do?” will soon find themselves asking a different question: “How the heck is Spidey getting out of this?”

(As a side note, the creature’s transformation reminded me quite a bit of Godzilla’s evolution in the Japanese film Shin Godzilla, which I only reference because it’s a fantastic movie, and I don’t mean that sarcastically)

Surrounding the Cockroach is a whimsical world of Wrightson’s design. A realm of psychedelic colors gives way to a tranquil sea of white clouds, broken up by the Cockroach’s menace. Mandi’s longboat stretches across the panels like a Viking vessel of old, not necessarily majestic or endowed with decoration, but a darn sturdy-looking ship that feels like something sailing out of a Norse legend. This world is not endowed with over-the-top fantasy details--no Elves or Dwarves swarm the landscape, no castles tower high into the clouds--but this simplicity allows Wrightson to focus on the right details, and I would argue the lack of an incredibly detailed world makes the Cockroach stand out. The muted backdrop of clouds causes the dark skin of the monster to pop, as well as the colors of Spidey’s costume, who’s drawn to look more like his typical comic book self rather than the slightly more realistic-appearing setting he’s stepped into. The effect is slightly distracting at first, as Spidey appears at times to look more like he’s been plastered on top of the art rather than drawn into the world. But I believe Wrightson made the right choice in making Spidey look this way, more akin to his comic book form, keeping a tether to what comic fans are familiar with as they read. 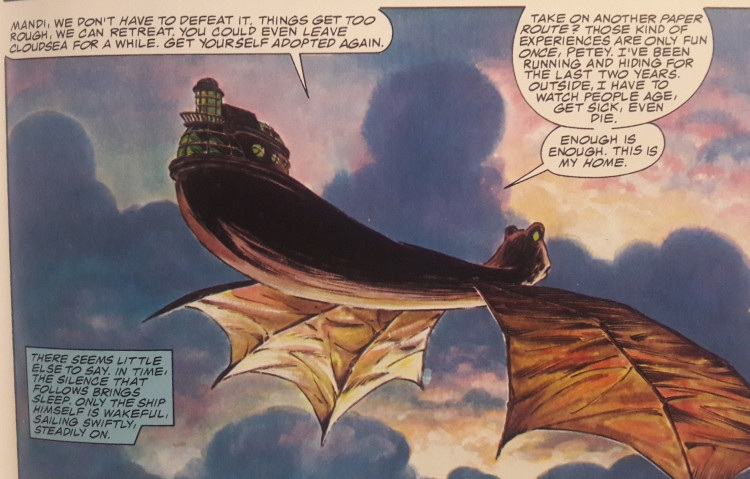 To avoid the risk of spoiling the story’s end, I’ll briefly and generally discuss one piece I enjoy about the conclusion and one element I’m not too fond of. I believe the story wraps up well; there’s a “not everything you think is real” development near the story’s conclusion, and while it’s not something I would label a plot twist, it does alter your perspective of the narrative were you to give this graphic novel another shot. This idea works to enhance the story a bit and brings Mandi’s narrative to a fitting end. I will note that “fitting” may or may not mean “happy,” so as not to spoil it, meaning you’ll just have to head into this tale yourself to figure out what it is.

Slightly negatively, the battle against the Cockroach ends disappointingly. Again, I will spare you the details, but I’ll give an example to highlight what I mean: have you ever read a fantasy novel or seen a film (or heck, even read a comic) where the climactic battle between hero and villain is resolved by sheer willpower? The hero comes to his senses and, despite all odds, pushes back by strength alone and defeats his foe. Some internal spark, some resolution, causes a sudden surge of strength and power that wasn’t there before. It’s almost a form of internal deus ex machina, a victory not so much based on the merits of either what came before or on what the hero has done or been, but in a sudden, stalwart resolution. 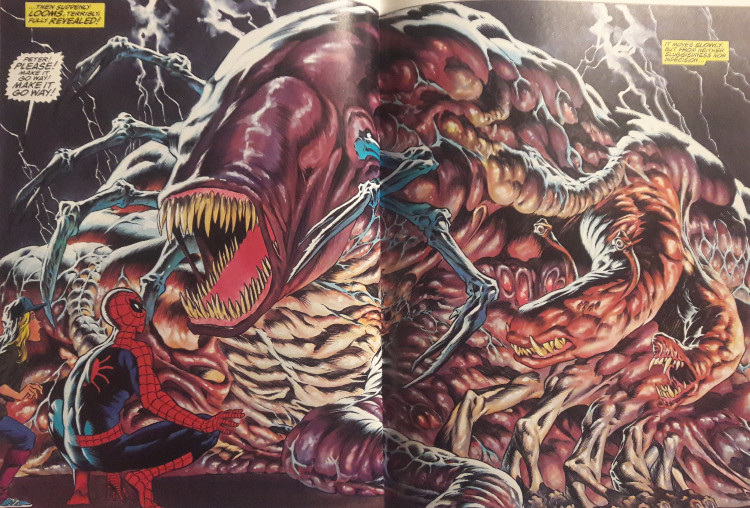 I’ve never been a huge fan of this type of storytelling, and “Hooky” has a similar finale. It feels indicative of a writer putting themselves in a corner, of placing their characters in a situation where something sudden, mostly random has to occur to defeat their foe. Heaven knows I’ve done this to myself on several occasions, but it happens here too: you have a monster who changes form whenever it dies? Is it even possible to kill the thing for good? In answering this question, Putney utilizes an unsatisfying strategy that feels corny.

Yet, the rest of “Hooky” is entertaining. It’s a different breed of Spider-Man story than readers might be accustomed to as Spidey squares off against a magical monster hunting a wizard. Spidey and magic mix often, but they sometimes don’t mix all that well. Stories throwing Spidey headlong into a different realm, having him face ancient wizards, or interacting with fantasy creatures can feel disparate as they try to reconcile classic superheroics with magical aspects. Fortunately, Berni Wrightson’s artistic style removes any doubts. His art doesn’t distract from any potential narrative pitfalls, but it helps guide you through a world Spidey isn’t accustomed to. A lesser artist may lose you in a haze of magical landscapes and strange creatures for the pure sake of crafting something bizarre. Putney and Wrightson don’t make that mistake, so while Spidey may look a tad out-of-place visually, you’ll see the core aspects of Spidey’s protective and heroic nature on display as he guards a young girl against a giant monster and her even bigger fate.