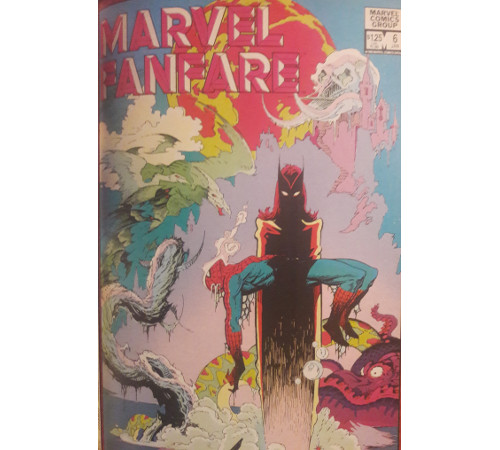 After helping initiate the Marvel Fanfare series of comics in early 1982, Spidey took a break until the series’ sixth issue. Sporting a delightfully unnerving cover by artist Charles Vess (an illustrator we will be admiring in future installments), this issue sees Spidey hop from our reality into another to save the life of the Scarlet Witch, who at that time was going by the name Wanda Frank (because, according to Wikipedia, she believed for a while that her father was World War II-era speedster the Whizzer instead of Magneto...yeah, that was later retconned).

A “series” in name only, Marvel Fanfare was really an anthology of sorts, showing the craftsmanship of top writers and artists of the time, so this story is not connected to Spidey’s previous Fanfare appearance. A standalone story, “Switch Witch” replaces dinosaurs with magic...but is that necessarily a good thing? 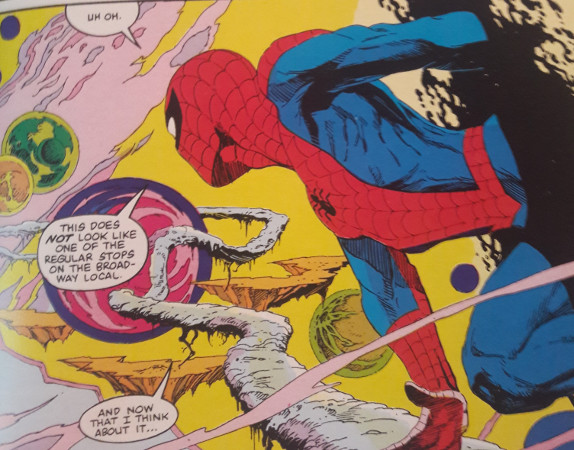 Though I’m unfamiliar with both Mike W. Barr and Sandy Plunkett, I can’t say that “Fanfare” moved away from its original premise by the time this issue debuted. Considering other stories were written by Chris Claremont, Roger Stern, J.M. DeMatteis, and Bill Mantlo, and were penciled by artists such as Charles Vess and Dave Cockrum, Marvel got a hold of some impressive creators, men who either were or would become legends in their field, for this title. The names of Barr and Plunkett just do not resonate with me like the names I mentioned above.

Impressively, for this issue, Barr chooses to bring in an old foe of both Spidey and the surgeon-turned-Sorcerer Supreme of Bleecker Street, Doctor Strange: the malicious wizard Xandu. First appearing in Amazing Spider-Man Annual #2, Xandu sought the infamous Wand of Watoomb from Doctor Strange, hiring a few roughians to steal one half of the powerful talisman to combine with his own and use the finished Wand for his own nefarious ends. At the time, Xandu was your standard “I’m gonna conquer the world” villain, an archetype with very little imagination behind it. This all changed with his next appearance in Marvel Team-Up #21, wherein readers learned that Xandu sought the Wand’s power for a deeper purpose beyond magical domination: to save the life of his beloved Melinda, whom he had accidentally put into a sleep state similar to death, per Doctor Strange’s words. Unable to help the green-garbed madman find a cure for Melinda, Doctor Strange and Spidey left Xandu, defeated and depressed.

But he didn’t stay that way forever. 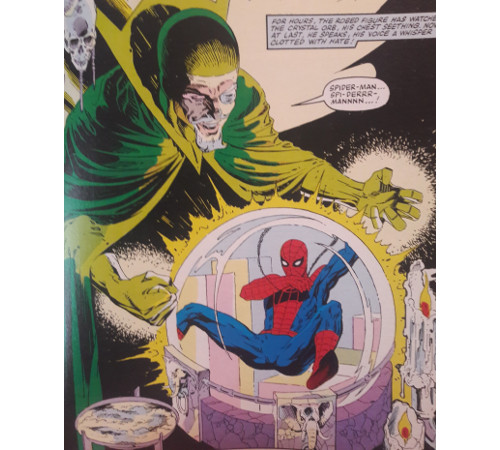 Xandu and the Wand reappear here, with the mad magician concocting a new plan to revive his fallen love with the aid of the Wand of Watoomb. Kidnapping the Scarlet Witch, Xandu transfers her consciousness into Melinda’s comatose form and vice versa, turning the Scarlet Witch (now inhabiting Melinda’s formerly immobile body) into a mindless servant while reanimating Melinda’s consciousness by placing it in Wanda’s physical form. Odd a sentence as that may appear to the untrained eye, I guarantee it's perfectly understandable to us comic fans. Transferring consciousnesses between bodies? Magic wands granting evil wizards untold powers? Just another day in comic book paradise for us geeks.

Entertaining a premise as this is, and as happy as I am to see Xandu make another appearance in a Marvel Comics issue, I struggle with understanding Spidey’s role in this story. Doe-eyed Xandu turning the Scarlet Witch’s body into a puppet while he plans to marry the woman who now has her mind invaded by Wanda Frank makes perfect sense, but for the same villain to actively invite Spidey onto his home turf--the “Death Dimension,” as Xandu calls it--while his plan is still in motion makes me pause and scratch my head. While musing over this blog, I couldn’t actually remember the reason why Xandu makes such a decision, but by poring over the story again, I found two reasons. First, he wants vengeance on Spidey (and Doctor Strange as well, but for some reason, the good doctor is second to our arachnid-like friend) for the past times the hero ruined his schemes. Second, he sees toying with Spidey as fun: “You shall provide entertainment for the wedding party!” Xandu sneers at Spidey before summoning a legion of demonic Death Dimension denizens to chase after him a la “The Great Game.” But even this plot point makes little sense--though Spidey spends a few pages tearing through the psychedelic swamps and underbrush of this alternate dimension, fleeing his monstrous pursuers (who, as Xandu indicates, are fully encouraged to murder the Web-Spinner), he ends up captured by the zombie-like Scarlet Witch to be brought before Xandu so Voldermort-lite may finish the job. So what was the point of the hunt, then? 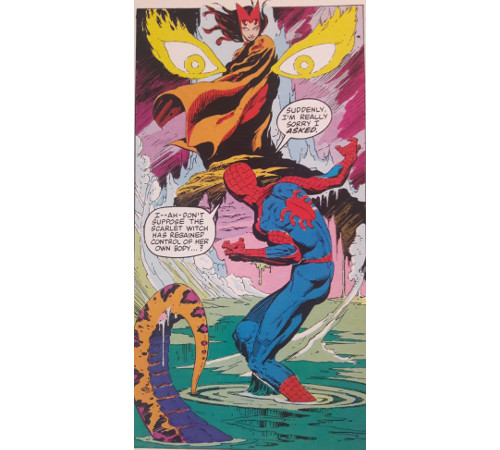 Even after he’s captured, Spidey’s role continues to be minimal. Xandu, ready to destroy our hero, is shocked when Melinda’s spirit suddenly appears to beg him to stop his mad plot. Spidey is able to knock the distracted wizard unconscious, uttering the slightly-meta quip that it’s probably “the only punch I throw during this whole mess,” which it is. It’s even Melinda’s power which returns Spidey and the restored Scarlet Witch to reality, trapping Xandu within the Death Dimension. Other than that single knuckle sandwich, Spidey fails to serve up any entertaining action, nor does he impact the story much at all.

Two types of logic seem to exist when it comes to these graphic narratives: “comic book logic” and “storytelling logic.” I define “comic book logic” as the characters’ ability to understand and accept how comic book tropes work in their version of reality. Spidey gets whisked off to this trippy dimension and runs from a horde of demons and reacts to it like a champ instead of a scared little kid, all because this is the exact kind of crazy shenanigans that happen to him and in his world all the time. Galactus comes to earth, Curt Conners turns into a man-sized Lizard and runs around the sewers, Thor battles Hercules in New York, or superheroes go toe-to-toe in several pitched battles in multiple different states or countries...all of this is accepted as fact by heroes and civilians alike. I don’t mind that at all; in fact, I love it. By having all these characters grow accustomed to a world where heroes and aliens and gods mingle, the Marvel Universe feels real. 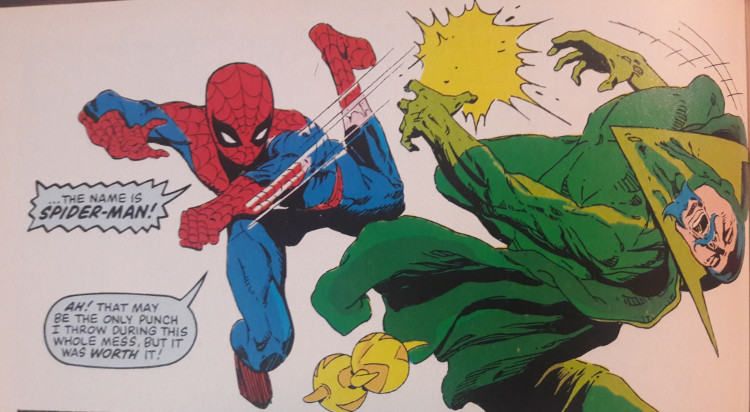 Yet, the other type of logic constantly skulks just around the corner. “Storytelling logic,” in my mind, refers to narrative tropes, constants, elements, etc. that define stories and help writers tell tales in a coherent manner. Our villain has a clear-cut reason for hating our hero or involving him or her in their master plan, creating tension and conflict between the characters for professional or personal reasons. Why Xandu, in this case, would think to involve Spidey in his latest scheme stumps me. Though I understand they have personal history, I would surmise that Xandu would want to “celebrate” his upcoming nuptials with Doctor Strange by inviting that prestigious sorcerer over as “entertainment.” I can guess that the writer wished Spidey to star over Strange in this particular issue, but Xandu himself doesn’t provide a decent in-narrative explanation for choosing Spidey as his instrument of fun. If “Xandu hates Spidey” is supposed to be explanation enough, I suppose I’m harping on something that doesn’t need to be harped upon. But for me, I was hoping to see a bit more depth or understand better Xandu’s reasons for involving our hero, especially when his plan changes halfway through the issue by sending the Scarlet Witch after Spidey.

Though “Switch Witch” is a bit of an incoherent mess at moments, the back-up story included in this issue is actually a treat. Roger Stern (who you may remember as the writer of "Nothing Can Stop the Juggernaut") and Charles Vess craft a short Doctor Strange tale that sees him confront a wannabe rival who challenges Strange to his title of Sorcerer Supreme. Confident to the point of cockiness yet able to hold his own against Strange at first, the young man is written with such assurance and ability that I couldn’t help but wonder if he was just a prima donna or much, much more. This is thanks to Stern’s ability to keep you second-guessing throughout the comic by offering only the young man’s perspective, getting into his head as he battles not only Strange but a host of other magicians. I wondered the whole time whether the comic was a dream concocted by this young man, if he was as powerful as he believed himself to be, or if some sort of trick was happening. I won’t reveal the ending as it’s also pretty well-written by Stern, but I marveled throughout the piece at the writer’s ability to keep me on the edge of my seat. For so few pages, Stern crafts a full-fledged story that’s whip-smart and highly amusing. 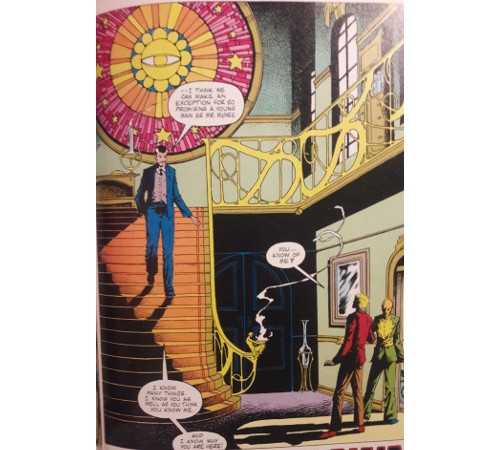 I admire Barr’s dedication to continuity in “Switch Witch,” bringing back an old foe to terrorize our hero. Including such an underrated villain and giving him some small room to breathe is admirable and adds history to a character who could have easily fallen to the wayside, even if the execution is quite messy and perplexing at moments. If you removed Spidey from this story, I’d argue the tale would go in a similar direction than it does with him included. Melinda would have still appeared to Xandu, the Witch may still have been restored. And even if Doctor Strange may have been the more opportune choice for this issue, perhaps his absence can be explained away, as he was off dueling a would-be-usurper to the title of Sorcerer Supreme in a story that is far shorter than yet superior to our Spidey-centric narrative.