The sequel to Jim Shooter's fantastic crossover has its moments, but fails to be the engaging philosophical powerhouse it tries being 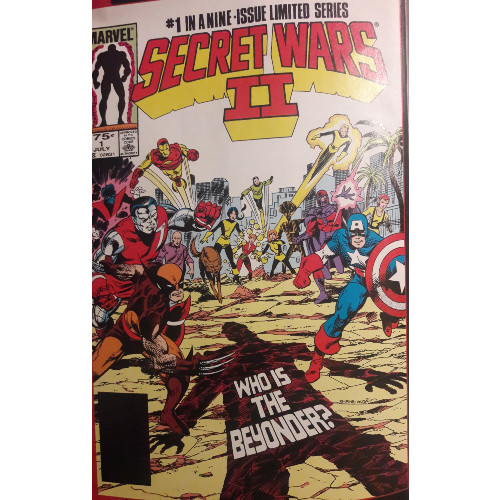 When we examined the first Secret Wars, I commented that Marvel’s first major crossover (aside from Contest of Champions, which only sorta counts…) maintains its staying power over thirty years later. Not terribly deep, Secret Wars is still a highly entertaining tale that has had some surprising impacts on the Marvel Universe. Don’t believe me? Check out the thirty-three-part series I recently wrapped up on Spider-Man’s “Alien Costume Saga.” Also, any story to ever feature Venom and/or Carnage.

A story of such magnitude and popularity is bound to produce spin-offs or sequels, so it shouldn’t be much of a surprise when I state that Secret Wars spawned a second chapter, Secret Wars II. Jim Shooter, writer of the first epic, returned for this nine-part saga that inverted the basic premise of the original tale: instead of an all-powerful being kidnapping a bunch of Earth superhumans and bringing them to himself, this godlike individual presents himself to mankind on our tiny, spinning blue marble.

But if you think that the Beyonder is anything like another Earth-bound alien with incredible abilities, you’d be quite wrong. 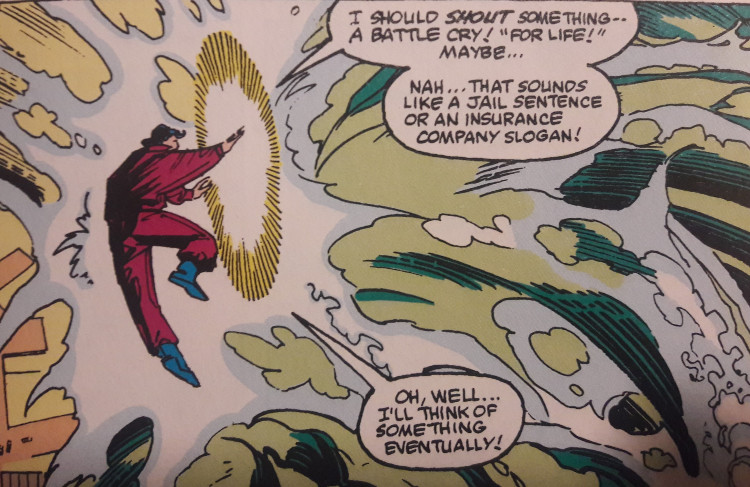 Our good buddy Al Milgrom takes a break from upending Peter’s love life over in Peter Parker, the Spectacular Spider-Man to contribute his pencils to Shooter’s latest epic. His presence adds a hint of familiarity for anyone who may have just finished or recently read his chapters of the “Alien Costume Saga.” Though no narrative similarities really exist between the “Saga” and this limited series, I’m glad to see Milgrom here.

As I mentioned, Shooter crafts a distinctively different tale that he did in the original series. Secret Wars presented the Beyonder as an enigmatic, unknowable, formless entity, a god in his own right, possessing the power to destroy galaxies and create planets on a whim. Shooter takes that incorporeal creature and solidifies him, giving him human form, condensing unimaginable power into a much smaller package. The effect is, essentially, to humanize this otherwise inhuman deity, to give him a personality and a sense of tangibility. 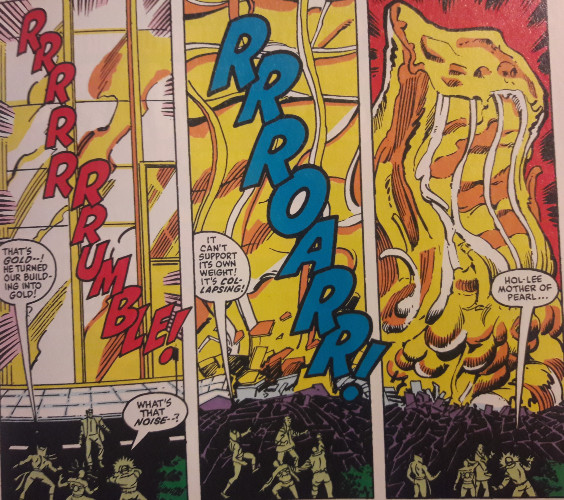 As a character, the Beyonder is genuinely fascinating. I’m sure others have made parallels to characters such as Superman or even a figure such as Jesus Christ as the immeasurable Beyonder puts on human flesh and walks amongst mankind. Yet the Beyonder is different from both Superman and Christ. For one, he’s not a savior...at least, not necessarily at first. His mission is not to rescue but to learn. Shooter crafts multiple engaging scenes where the Beyonder interacts with people and heroes as he attempts to grasp at the meaning of life, giving the character a "fish out of water" quality. Moments such as the Beyonder eating glassware because he doesn’t understand food or transforming an entire skyscraper into gold because gold has financial worth, without considering the implications of such actions or understanding how reality functions, is fascinating. It’s like watching a toddler learn about life and the world around them, and because the Beyonder is presented as highly ignorant, you don’t laugh at his foibles. You empathize with his lack of understanding...or worry he's going to do something obliviously catastrophic.

Yet fascination is somewhat tempered by heavy-handedness. Early on, Shooter strives to inject some moral messages regarding mankind--specifically pertaining to class and resources--that just don’t land. His intentions are decent, but his aim is too direct and demeaning to offer any real impact. You get the sense that,as the Beyonder learns about humanity's intricacies, you the reader are supposed to take away some deep, heartfelt lesson. But when those lessons come in the form of “these people are just plain wrong and others are perfectly right,” a certain snobbishness enters the story. Shooter simply feels the need to present some of his personal thoughts and beliefs, and though he has a right to do that (it’s his story and voice, after all), his method and tone feel off and a little improper. 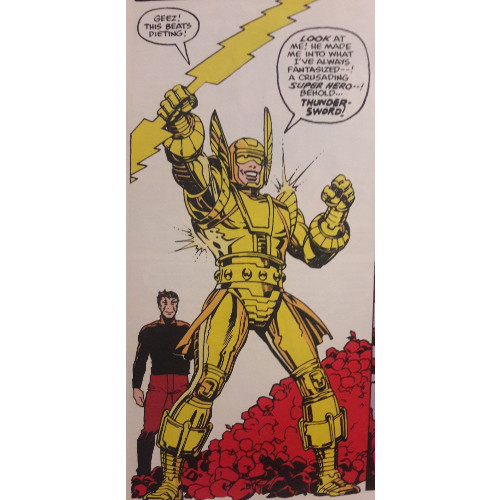 For example, the first issue features a down-and-out animation artist offered vast abilities by the Beyonder. Immediately, the disgruntled employee explores a power fantasy, destroying his place of work and getting a semblance of vengeance on his corporate overlords (a few other commentaries I’ve read suggest this character is a metaphor for a possibly dissatisfied Shooter himself). Once defeated by a group of assembled Marvel heroes, the man realizes the consequences of his rash actions. Thus, Shooter’s point seems divided: “Our evil industrial masters harangue us poor hard workers, but remember, kids, revenge is evil, and if you do something wrong, you may regret it.” If Shooter were trying to proclaim some sort of moral message--that, say, even if you’d love to take vengeance on your superiors, there are always better ways to work through a dark or seemingly desperate situation--I wouldn’t have as much a problem with this. As it stands, Shooter’s potential stand-in is simply left with the horror of his actions...and that’s it. And the Beyonder suffers no consequences for his involvement.

It’s when the Beyonder explores more ethereal concepts, such as love and desire, that Shooter manages to find his voice a bit better. The Beyonder’s tale is one of longing, rejection, thoughtfulness, purpose, and individuality, and it’s these ideas Shooter expresses decently. In several aspects, as powerful as he is, the Beyonder becomes surprisingly relatable--he becomes frustrated when a girl rebuffs him, he searches for identity, he seeks happiness through money and work, he tries to find a reason for living beyond mere existence. Is life about helping himself or others? Should he try to live as a god masquerading as a man or as a fully-human individual? Though each strand occasionally feels separate from the others (in a word, issues feel somewhat independent of each other rather than all contributing to an overarching story), I think Shooter explores each concept well enough. Each issue never feels like it’s stretching to fill its required page length, nor does the pacing ever feel bogged down.

And what of our celebrated cast of Marvel heroes? How do they fit into this limited series? Surprisingly, they’re not as present as you might imagine. The Beyonder approaches characters such as Peter Parker for insight into how certain things work, and characters such as the X-Men doggedly pursue the Beyonder and pop up every so often to spar with him, but their presence is limited. Most heroes, in fact, appear to fight the Beyonder, seeing him as a massive threat to all existence (which, in a sense, he absolutely is). Shooter’s handling of them is, unfortunately, less nuanced than his depictions of characters in the original Secret Wars. Characters like Captain America feel one-note, as do teams such as the X-Men, spouting off the same rhetoric about the Beyonder and discussing nothing but how dangerous he is. Even that idol of millions, the lovable, blue-eyed Thing, continually threatens to murder the Beyonder. Does it add conflict? Sure, but it also means introducing moments that feel anathemic to traditional depictions of your favorite heroes. 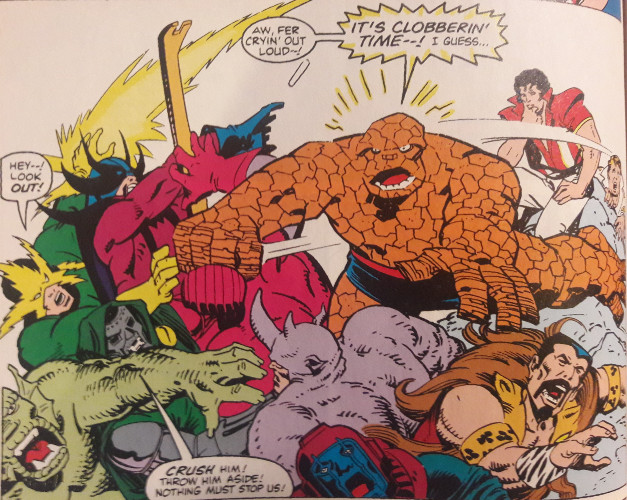 This leads to me wondering about the tie-ins: unlike Secret Wars, the sequel has bucketfuls of tie-in stories to explore, none of which are included in the volume I purchased (the out-of-print omnibus is ridiculously expensive). Back in 1984, issues of the Amazing Spider-Man, X-Men, Fantastic Four, Avengers, and other series simply led up to the events of the original Secret Wars. For example, ASM #251 ended with Spidey entering the portal to the Beyonder’s Battleworld, and ASM #252 started with him returning to New York. From what I’ve read, it seems like other series did the same thing, skipping over the events of Secret Wars in their own titles and letting Shooter dictate the goings-on in the miniseries. Though each series dealt with the fallout from that event, the actual titles themselves were not ingrained in Secret Wars itself. Conversely, for Secret Wars II, the issues of those same titles happen in-between the events of this crossover series. Therefore, if you’re interested in reading the whole scope of Secret Wars II, you’ll have to invest, somehow, in about 40 issues worth of story, including the miniseries.

I am of a divided mind when it comes to tie-ins: I find that if I can purchase an entire story, including the main series and its additional issues, for a decent price, I don’t mind. For example, I recently read and reviewed Spider-Verse, a series which collected its ensemble issues in one, reasonably priced trade. I really enjoyed knowing the entire story, seeing where all the little character moments occurred outside the central arc Dan Slott presented. In other instances, like Marvel’s Civil War crossover event, I find that the tie-ins aren’t necessary to enjoy the actual series. Mark Millar does a great job making his story feel complete without egging you on about buying the tie-ins. The few related issues I do own are all Spidey-centered (naturally), but as interesting as those arcs are, I’ve never felt like they were integral to understanding Millar’s main narrative. 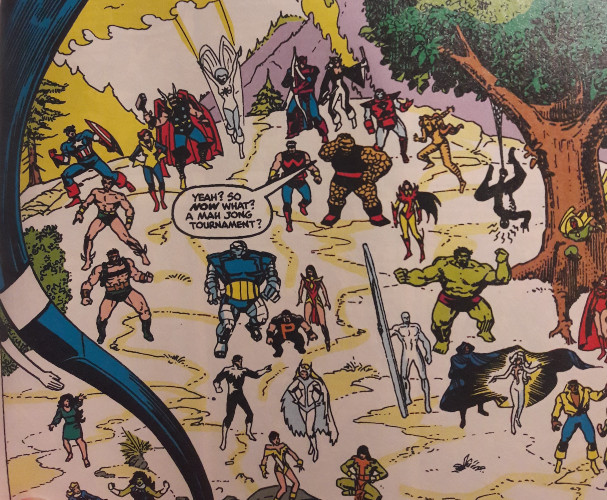 Reading Secret Wars II is not the same experience as reading Spider-Verse, Civil War, or even the original Secret Wars. It never guilts you into wanting to buy the tie-ins, certainly, but it doesn’t feel complete without those added chapters. Shooter references events occurring in the related issues that definitely feel important in better understanding his points. I think I would realize the roles of certain characters better if I had been able to read those issues. Would I have gotten a surer grasp on why the New Mutants despise the Beyonder so much? Would Captain America’s uncharacteristically rude demeanor have made more sense? Would flashback sequences focused on Spidey and the Puma’s interactions with the Beyonder have been more impactful if I’d read the story Shooter referenced? Or is that just poor writing on Shooter’s part? I legitimately don’t know.

As a result, Secret War’s sequel feels a bit incomplete. Sure, Shooter tells a story with a beginning and end, but it’s that middle part which becomes a little blurry once you consider all the omitted material from the central series. I do have to add that I know that the tie-in issues are important and probably accentuate the Beyonder’s interactions with other heroes and exploration of universal themes. Were I to read Secret War II as a whole, including all its varied pieces, I may have enjoyed it more. And that isn’t to say the mains series is devoid of enjoyment or depth--as I mentioned previously, Shooter does a nice job having the Beyonder explore some personal themes. Perhaps he grasps at too much for a nine-issue series to fully explore, but there are genuinely decent touches here and there. Yet the same enjoyment I felt with largely standalone Secret Wars was lost on when I realized several fragments are just missing, leeching some of the potential entertainment from Shooter’s sequel. Shooter does live up to his name--he shoots, but you can’t really tell if he’s scored by the last issue’s final page.