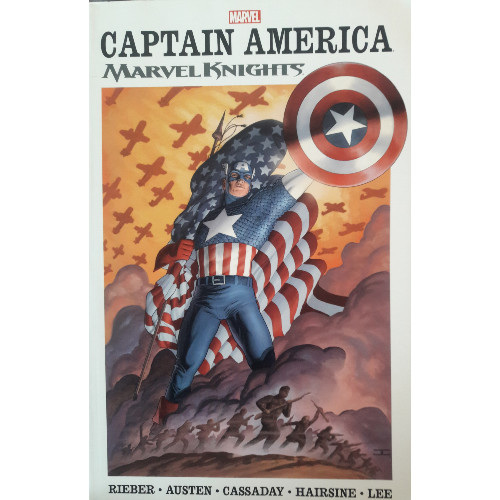 The question has, at one time or another, permeated the public conscience, growing more impactful as the years build. I personally recall the events of September 11, 2001 very vaguely, not even seven years old when the attacks happened. In my mind, I see a single vivid image: one of the twin towers, starkly situated against the blue sky, a plume of smoke curling beyond the frame of a news camera. Only later did I learn additional details of the attacks. Who planned them, how they occurred. I learned more about the death toll, the survivors, the first responders, the additional planes. The heroes and villains and victims of that tragic morning.

The event has pervaded our pop culture, either influenced by or affected by the events. Famously, shots from Sam Raimi’s original Spider-Man film were removed to edit out the towers; a single teaser trailer (pulled from television shortly after the attack) is all that remains of any reference to the Twin Towers in the film. Infamously, Remember Me, a 2010 film starring Robert Pattinson, ends with Pattinson’s character starting a new job in a New York skyscraper one seemingly peaceful fall morning. I need not elaborate on the location or the particular date, but needless to say, the “twist ending” was divisive.

The world of comics was similarly affected, with various companies and titles paying homage to the tragedy in some way. Amazing Spider-Man dedicated an entire issue to the incident, watching Spidey intervene in the aftermath and seeing characters of all creeds responding to the attacks. John Romita Jr.’s depiction of Dr. Doom shedding tears at the sight stands out as a memorable image, partially because of its polarized reception. Yet it highlights the nature of the story: 9/11 was a horrendous tragedy. “Never forget,” as the saying goes.

The Marvel Knights imprint would launch several series, one of which was focused on Captain America. Cap’s series starts right in the aftermath of 9/ll, utilizing the event (or perhaps capitalizing off it?) as the jumping off point for new stories about the superhuman World War II vet. We’ll be taking a look at the first of two volumes of Cap’s Marvel Knights run, examining how it uses Cap at the dawn of the 21st Century. Seeing as how I recently commented on Gerry Conway's use of Cap in a Spectacular Spider-Man arc, and considering the character's MCU legacy as depicted in Falcon and Winter Soldier, now seems an appropriate time to elaborate on this series. 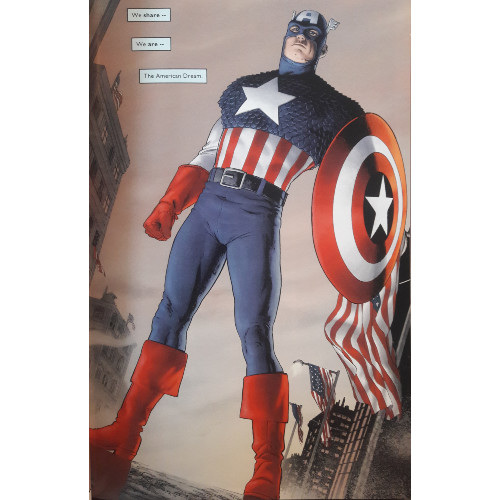 Part of me wants to believe this series was born from the question How would America have responded to 9/11 if we’d had a superhero on our side? And then that question was taken and remolded to fit a more reasonable format. Because, if I’m being honest, I think many writers or artists given the chance to write post-9/11 Captain America comics would have sent Steve Rogers straight to the Middle East to aid in war efforts or hunt down terrorists. He’s done it before, right? After Steve took the Super Soldier Serum, he was directed straight to Nazi Germany. Why not do the same approach here?

Wisely, writers Rieber and Austen don’t take that avenue. Unwisely, the direction the series starts off in isn’t much better. I don’t mind the idea of a post-9/11 reflection in comics. In fact, if done well, I think it can end up being quite poignant. Rieber and Austen certainly want to be poignant, but they end up being far less subtle than they should be in getting that point across. Images of Steve Rogers sifting through rubble are powerful, backed by John Cassaday’s (of Astonishing X-Men and Planetary fame) art. Yet the dialogue within these pages feels trite, as Cap’s internal monologue delivers hackneyed phrases towards a broad audience. We’ve got to be stronger than we’ve ever been. Or they’ve won. But...stronger how? And who wins if we aren’t? “Save your anger for the enemy,” Cap tells a New Yorker about to kill a young Middle Eastern man. What enemy? I wondered. Terrorists? 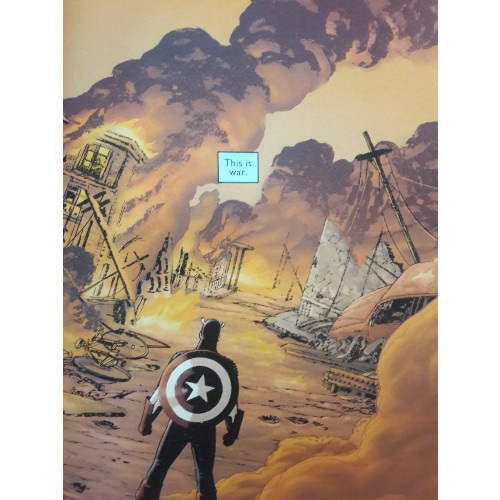 I’ll admit, 9/11 commentary must have been difficult to construct in the early months following the attack, as the nation was attempting to figure out just who was responsible, why they acted the way they did, and what was going to happen next. But the scripts presented in these early issues fumble what little solid information the writers had. We get a Captain America who feels unintentionally vague and hopes to inspire people through lofty ideals with little tangibility. At the same time, he beats the crap out of terrorists who attack a small American town and later journeys to Germany to beat the crap out of a head honcho terrorist.

I get the idea. Here’s Captain America, protector of freedom, doing whatever he can to defend or avenge American lives. If he can keep a young man from being murdered by racists, great. If “defending” means fighting terrorists, fine. But the throughline across this entire first story feels stiff and obvious: panels depicting Cap grabbing an American flag or preaching freedom hit the reader over the head with patriotism. There’s nothing wrong with freedom or patriotism, but under the pens of Rieber and Austen, Cap feels misguided. Too overt, perhaps? Blunt? 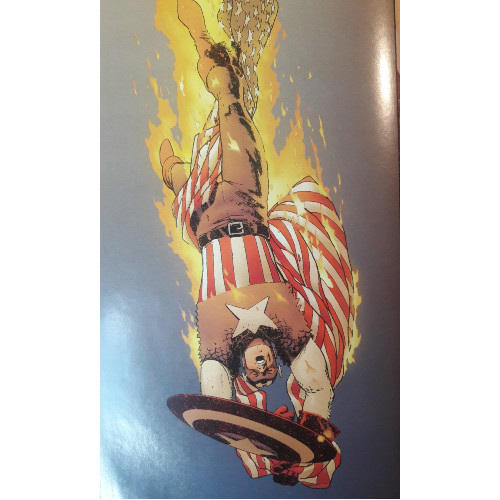 The other stories in the volume don’t fare all that well either. Each story focuses on a different villain--terrorist Faysal Al-Tariq, Inali Redpath, and the Interrogator--none of whom get enough screentime and all of whom leave dangling plot threads. The writers toy with some fascinating ideas--that Al-Tariq is part of a group embedded in various levels of government, that the Interrogator is part of a larger governmental conspiracy--all of which are interestingly teased...and then abandoned.

There are hints of genuinely good stories hidden within this volume. Redpath channels the aura of a Native American deity and goes toe-to-toe with Thor himself in some stunning scenes by Jae Lee; but, again, Redpath’s presence is overshadowed by stilted dialogue and a forced attempt to deliver a message. Al-Tariq could have been a truly threatening villain if the extent of his infiltration and organization had been decently fleshed out instead of being concluded and left untouched after five issues. Concepts and characters shift around too quickly for anything to grab the reader’s attention and emotions. 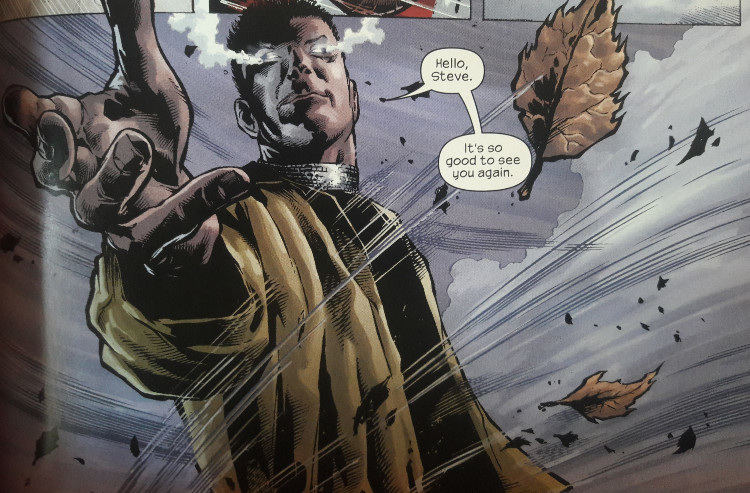 Perhaps the most interesting and simultaneously confounding element is a late plot twist where it’s revealed the U.S. government purposefully planted Captain America in ice, freezing him for decades (ya hear me? Purposefully. Planted). Upset by Cap’s protective attitude towards all humanity rather than just America (hmm, somebody tell the guy at the beginning of this series that!), the government intentionally dumps him in ice. It’s a late twist that flies in the face of every Captain America origin told or retold before, a concept which promises a lot of interesting repercussions but does absolutely nothing with the possibilities. Given that the concept doesn’t hold (frozen) water, the twist buckles (Buck-les?) under the weight of history and later Captain America stories, which don't reference this concept whatsoever. Under certain circumstances--maybe as a tale told in an alternate future?--the idea of the government having a hand in Cap’s decades-long sleep would be highly engaging; the repercussions of such a revelation, particularly Cap’s view towards American officials, would be fun to read and could serve as the impetus for several stories. But as a plot point developed about halfway through the series and one that, as far as I know, has never been touched on since, “Cap frozen by the government” sort of melts into nothingness. 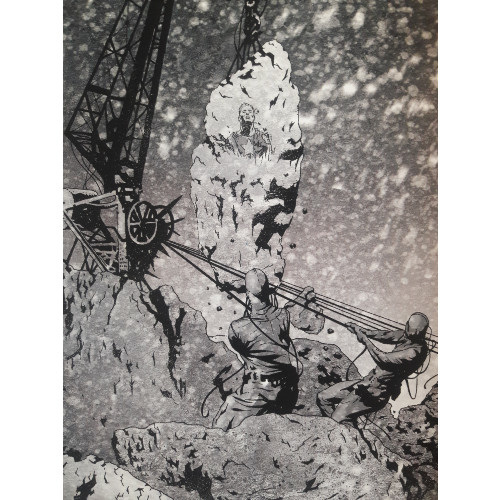 The first half of Cap's Marvel Knights series is, in a word, disappointing. You get the sense that the creative minds had ideas, or seeds of ideas, they wanted to express in these first sixteen issues. You’d like to believe they wanted to be poignant, patriotic, American, for lack of a better term...yet, forced, cliche dialogue makes something potentially powerful end up sounding hammy; moderately interesting villains become lost in the shuffle of plotlines and agendas; Cap himself struggles to gain traction under the burden of patriotic fervor. On a good day, Cap can whip a shield at a supervillain and defend America because it’s his home, because it’s his duty, it’s his way of serving...but on a bad day, Cap tosses his adamantium Frisbee because he’s angry. Marvel already has one angry hero. We don’t need another one, and certainly not one dressed in our primary colors.