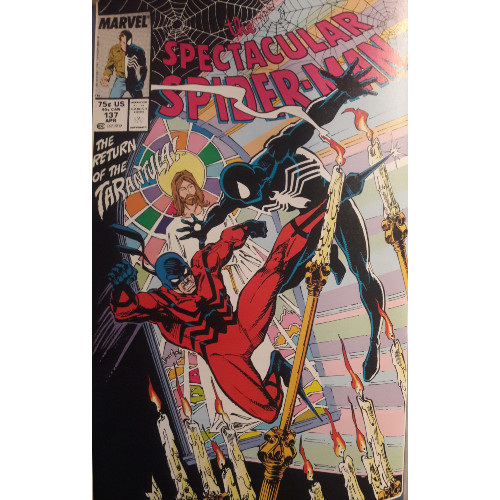 Return with me, if you will, to the pages of Spectacular Spider-Man (which, as I mentioned last time, dropped the Peter Parker portion of the title with the “Return of the Sin-Eater” story arc). The title has gone through a writer rotation recently--J.M. DeMatteis crafted “Kraven’s Last Hunt,” while Ann Nocenti worked on “Life in the Mad Dog Ward” and Peter David returned for the Sin-Eater sequel--but I’m pleased to say SSM settles on a more regular writer starting this arc: the illustrious Gerry Conway. Fans of Spidey will recall Conway succeeded Stan Lee as the regular writer on Amazing Spider-Man (at only 19!) and proceeded to write the title for three years. During his time, he not only introduced readers to the Punisher and the Jackal, but he infamously killed off Peter Parker’s then-girlfriend Gwen Stacy.

What does Conway’s return to the hero's world herald for Peter Parker? And how does a writer pick up after stories considered some of the most acclaimed narratives in Spider-Man history? 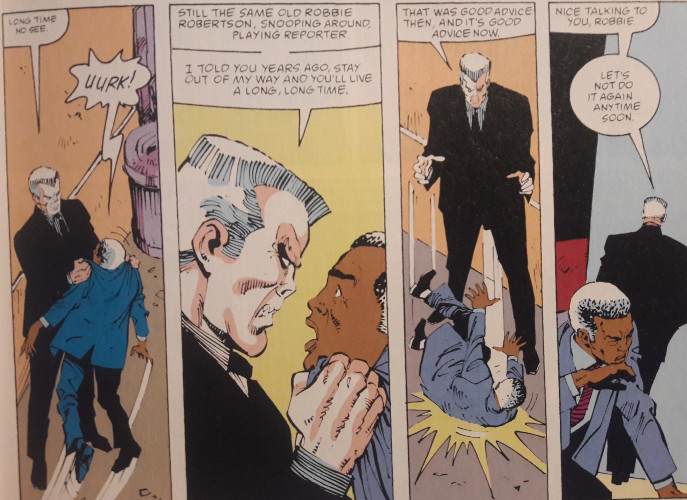 Retaining penciler Sal Buscema (who would illustrated close to 100 consecutive issues of the title) from David’s short stint, Conway looks to otherwise divorce himself from the immediate past as he starts sculpting his own stories. Recent events--such as Spidey’s live burial or the death of Captain DeWolff--are omitted as Conway begins. For someone who’s been enjoying reading these tales in chronological succession, I was ever so slightly miffed when Conway didn’t include references to recent history. I made a similar remark with Nocenti’s “Life in the Mad Dog Ward,” which failed, I believe, to significantly capitalize off the success of “Kraven’s Last Hunt.” Such stories, I argued, seemed too important to deny or not reference. Conway, I believe, deserves a bit of a pass: he’s too good and too notable a writer to ignore when it comes to skillful storytelling, and his ability to start “fresh” on this new run is energetic and fun enough to respect his willingness to cut some ties with the past.

Instead, Conway forges something new. He re-introduces villain Tombstone, a character he created in Web of Spider-Man. Tombstone, a mafia hitman, is expanded upon greatly in later stories, but Conway makes his presence known here. Conway seeds elements of later stories--Tombstone’s legendary ruthlessness and his history with Daily Bugle editor-in-chief Robbie Robertson--largely promising readers of tales to come rather than using the villain in any way significantly. For now, Tombstone moves in the background, delightfully and tenuously connected to the Kingpin through Fisk’s lackey, the Arranger. 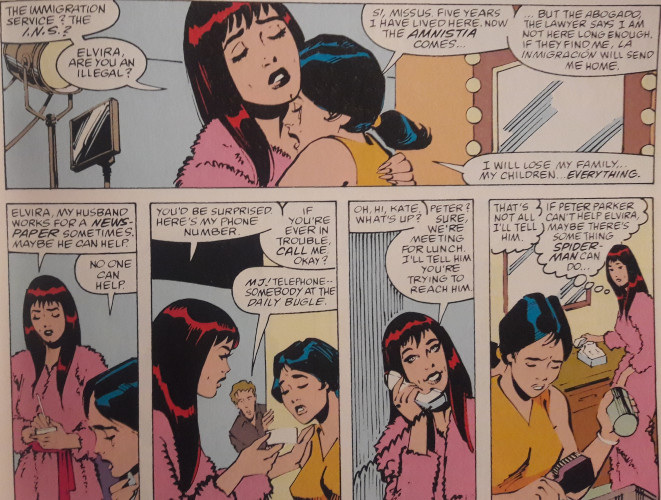 The bulk of Conway’s two-parter focuses on a still-relatable issue--immigration. Various illegal immigrants find themselves struggling in these issues as Conway weaves a tale of freedom and hope. What avenues are these people supposed to take? What happens when people wish to deport them? Interwoven with this struggle is the return of the Tarantula, a villain who first appeared in the very first issue of Peter Parker, the Spectacular Spider-Man (different guy, though--the first Tarantula died after transforming into a giant spider and being slain by police officers in Amazing Spider-Man #236 by Roger Stern). This second Tarantula represents a South American terrorist group hunting down these illegal immigrants (“political refugees,” as they’re called), and as well as Conway inserts arguments about freedom and questions about immigration policy, he makes one thing clear: no matter your view on immigration, it isn’t right for a terrorist to hunt down and murder these people.

Make that two things: Spidey’s going to do whatever he can to keep these folks safe. Conway certainly delivers his views on immigration, but he absolutely stresses the importance of heroism in all these instances. Policy may be important and necessary to discuss and debate, but evil is evil no matter what form it takes. This leads to some highly entertaining fight sequences between Spidey, the Tarantula, and the Tarantula’s goons in a church and railyard. Sal Buscema--who seems to keep pleasantly popping up wherever I turn as of late--uses his unique, easily recognizable, thin linework to great benefit in these sequences, crafting fluid and dynamic action sequences. 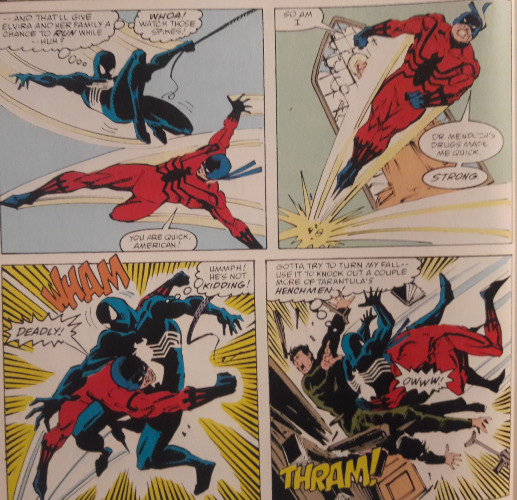 One of the more interesting elements of Conway’s story is the usage of Captain America. In a momentarily confusing narrative twist, Cap allies himself with Tarantula to go against Spider-Man, who’s been aiding the refugees the Tarantula has been hunting down. I wish Conway had cleared up the fact that this Captain America is actually John Walker (the future U.S. Agent of Falcon and Winter Soldier fame) and not Steve Rogers, but he doesn’t give any hint as to the identity switch. No editor’s notes or boxes pop up, encouraging you to read current issues of Captain America or some other series to discern what’s actually going on. To his credit, Conway uses Walker well--here’s a character who struggles with his role in Tarantula’s plot and wonders if he should just be a zombie “following orders.” Walker perhaps offers the best philosophical discernment to the situation as he juggles his options and beliefs in terms of ganging up against Spider-Man. Conway never clears up the confusion Spidey experiences when the two men attack him, which I don’t find problematic. I only wish the writer had clarified the “this isn’t Steve Rogers” issue at some point. 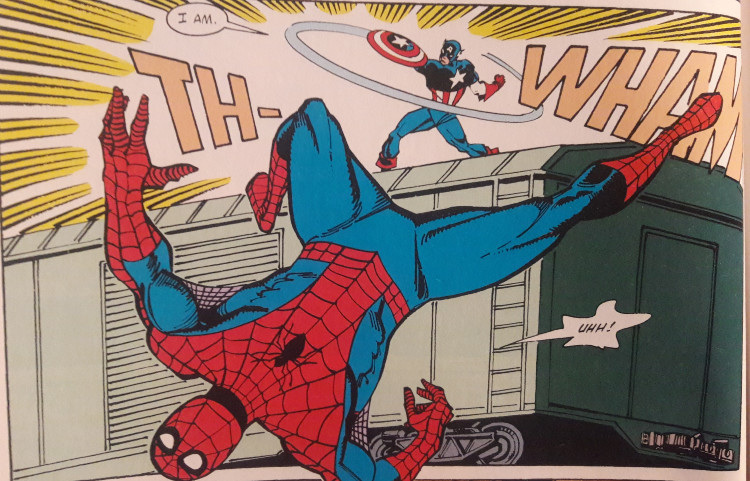 Conway’s two-parter is brief and surprisingly introspective, and though the immigration struggle is the only time Conway focuses on social justice in any form during his time on the series that I’ve collected, he writes it well. I’ll probably end up mentioning this a few more times over the next couple of blogs, but Conway surprises me as a writer. A few years back, I read a 2014 story by Conway called “Spiral” (which, of course, used Tombstone in some capacity) and a Carnage series he wrote. Even before touching on these 80s narratives, I discovered a writer whose style grew and matured. That’s not surprising, considering how young Conway was when he started writing ASM. I enjoy seeing how far the writer came in the decade or so between his last ASM issue and this first SSM story. His dialogue contains great fluidity, more thought and depth as he strings words and thoughts together coherently. Subplots find their way onto the pages, dramatically and naturally inserted between pieces of the larger plots. Conway, it seems, knows the direction he wants his narrative to take and feels confident in guiding us there. Additionally, he delivers a plot that isn’t wholly reliant on his previous tales. You don’t get horns and tambourines celebrating “The Return of Gerry Conway!” in a tale that latches onto the nostalgia of his “greatest hits” from the 70s. Later stories will focus a little bit on his historical run of ASM, but for now, Conway seems perfectly fine delivering new material instead of dredging up yesterday’s shadows.