This "crossover" arc toys with a clever concept, yet the subsequent narrative can't sufficiently support the oddball idea 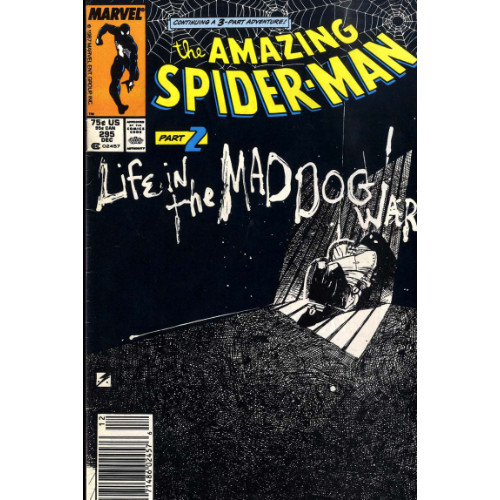 Coming right off the heels of “Kraven’s Last Hunt”—like, we’re talking the Amazing Spider-Man, Spectacular Spider-Man, and Web of Spider-Man issues immediately proceeding Spidey’s harrowing ordeal against his Russian nemesis—this three-part crossover storyline sees, perhaps not surprisingly, another “darker” Spider-Man story. For whatever reason, we’re wandering through a rather grim time in the life of our webbed-wonder.

I guess it makes sense, seeing as how, just the year prior, the comics industry saw the publication of both Frank Miller’s “The Dark Knight Returns” and Alan Moore’s Watchmen, staples in the world of “dark” or “mature” comic books. While I couldn’t say for certain that these stories had any tangible impact on how Spidey was written, it wouldn’t surprise me to learn that some of that inky, morally ambiguous grimness rubbed off on the typically colorful paragon of power and responsibility.

Despite this, we’ll come to find that “darkness” in Spidey’s world often translates differently than in comics where an old man in a bat suit beats up a deranged clown or where a maniac unleashes a massive squid upon New York.

“Life in the Mad Dog Ward” 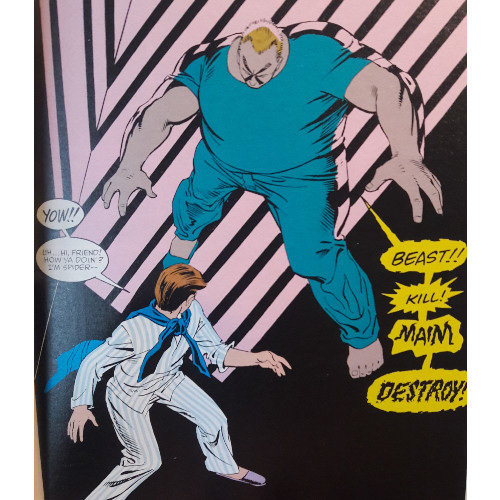 A Spider-Man story that doesn’t start with Spidey is a strange way to begin a comic, but Nocenti immediately hooks you with the story of a young woman trying to flee her husband with their children. Vicky Gibbs is, sadly enough, emotionally disturbed and lives with a husband, Frank, who has ties to organized crime, specifically the Kingpin. Nocenti’s first several pages weave what is actually a really intriguing tale about this poor woman—she’s someone you sympathize with, even if you don’t quite understand her, and you feel a genuine pang of despair when her husband halts her attempts at leaving and has her hauled off to an asylum. Sadly, while Nocenti does try to write Frank as a character to sympathize with as well, her efforts don't work as effectively in my opinion. Frank supposedly hates that he has to send his loving wife away, to keep her from spilling what she knows about his lifestyle and bosses, but deeper still, he seems more afraid of getting killed if he doesn’t hand her over. So Nocenti tires to inject some personal stakes into his decision, but choices like this one really leave no room for empathy: you’re either facing death at the hands of your CRIMINAL BOSSES because your poor, mentally ill wife could spill the beans OR you’re sending your poor, mentally ill wife to an INSANE ASYLUM run by those same CRIMINAL BOSSES to save your own skin.

Peter becomes involved because he happens to bump into the kids while on a walk, just as the ambulance is speeding by with their mom. The kids take off to follow their mom, and Peter eventually decides to track the kids down. At the asylum, Peter’s shot and injured, taken into the Mad Dog Ward and doped up enough so he can barely remember his own name. From here, he’s gotta figure out the best way to get outta this place and save Vicky.

All in a day’s work, right? 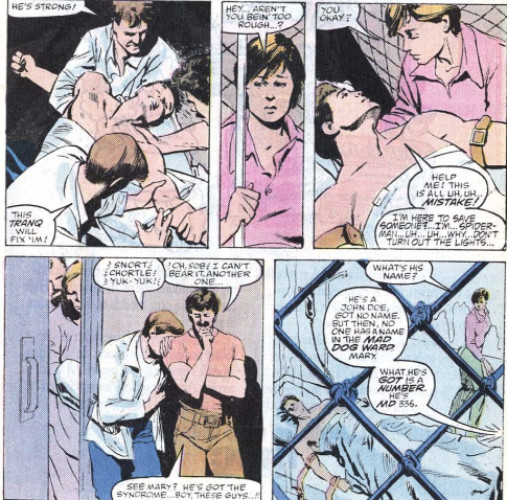 I can’t say I enjoyed this story nearly as much as I enjoyed a tale like “Kraven’s Last Hunt” or “The Death of Jean DeWolff.” The biggest issues I have with “Life in the Mad Dog Ward” is that it moves much too quickly and can’t seem to settle on what it’s trying to say. Let’s call it the story’s “identity,” which it has a difficult time finding. What starts as a potentially dramatic, possibly realistic take on mental illness, seen through the microcosm of Vicky’s experience, turns into a slapdash superhero story that just yanks in Spider-Man and sorta, kinda tries to make a statement regarding individuals suffering from mental illness. Though Nocenti does her best to portray other patients in the hospital in a sympathetic light, we don’t spend enough time with these characters, nor are their backstories or disorders fleshed out enough, for us (and by “us,” I mean “me") to establish a significant rapport with any of them. Nocenti does craft one kinda interesting character named Zero, using some page space to let the reader become a bit more attached to him as the story progresses, at least as much as three issues allow. Yet even here, Zero's srtory and experiences become clouded with other new characters and events going on. You get the sense that Nocenti is inserting commentary on how she perceives the state of psychiatric hospitals and what she views as appropriate vs. inappropriate treatments for individuals with mental disorders, but this is buried within the story and only flares up a handful of times, not enough to make a firm statement on her part.

Set this against the backdrop of Vicky and Frank’s own stories, and you end up with a bit of narrative casserole. Vicky basically vanishes the moment the ambulance takes her away, only popping up for a few panels so Spidey can confirm she’s in the asylum. Frank undergoes a rather sudden and dramatic change of heart and ends up planning to flee the state with his kids and wife, should they rescue her. It’s a good idea on Nocenti’s part, honestly, because having Frank undergo this transformation is the one bit of actual characterization we see in this story. I would argue it happens a bit too quickly, but as with the patients, one can’t stuff a ton of development into three issues, so pacing is going to be quickened. 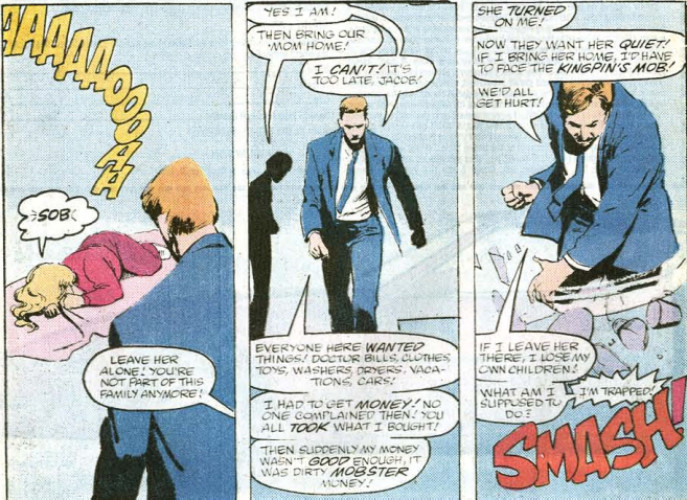 I'm also disappointed with the lack of references to “Kraven’s Last Hunt.” On one page in the first issue, Peter muses that he’s “still recovering from being buried alive and with [his] battle with Vermin.” And that’s it. Part of me certainly understands why Nocenti would want to divorce herself from any previous story in order to author her own piece; why be beholden to another author’s work and play to their rules when you’ve got your own story you want to tell? Unfortunately, moving so quickly from the ending of “Kraven’s Last Hunt” slightly dulls the impact of that story. Peter was buried for TWO WEEKS, something he was enraged to learn about once clawing his way to the surface. Kraven killed himself shortly thereafter. Those are rather monumental struggles for anybody to face, and all we get is that Peter is “still recovering.”

I’m not arguing that every story has to mention or be constructed upon the stories before it, so I understand why Nocenti would move in this direction. If you, as a writer or a series of writers, were constantly indebted to what came prior to what you were working on, you’d end up in a self-referential corner pretty quickly. But to hastily sweep such a miserable experience under the rug feels a bit like cheating. I can’t say it detracts from the quality of the story itself, but geez, you’ve got Spider-Man being drugged up and stuck in a psychiatric ward weeks, if not days, after being buried alive for the better part of a month. That should take some kind of mental toll, and if you were looking for some cool characterization, you might want to consider bringing that up? Maybe? 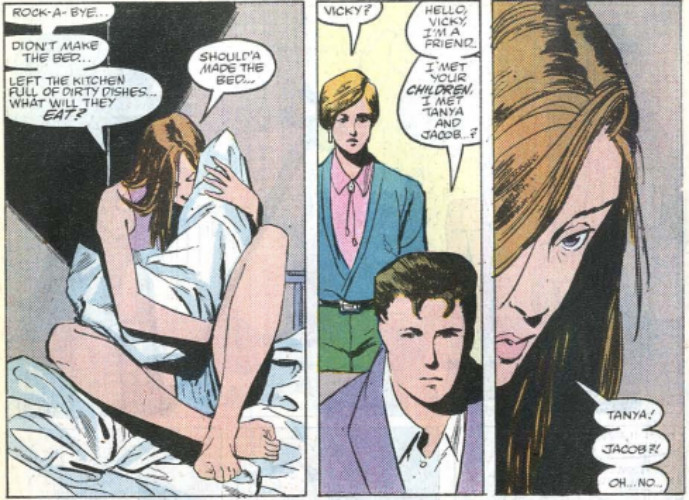 Okay, I know I’m dishing it out pretty hard on this story, so let me give it some praise: like I said, I enjoyed the opening scenes of Vicky attempting to leave Frank behind. Those pages offered a domestic quality, a realistic level of conflict that seems rare in superhero fare. Instead of giving us Spidey stopping a bank robbery or thwarting Mysterio for the hundredth time, we got a glimpse of a real issue in the lives of realistic people. I really appreciated that. And then for Nocenti to introduce this idea of a psychiatric ward run by a guy like the Kingpin where he stores potential threats to his criminal empire…that’s terrifying. Maybe it's because I've been watching Scientology: Leah Remini and the Aftermath via Netflix, but through this story, I was noting how awful it can be when powerful people abuse others however they want through typically legal or legitimate means (like mental health care). That’s a genuinely scary idea, and though I wish the story had taken the time to fiddle around with that concept more, I really do like how Nocenti played with it. It reminded me a two-part storyline called “The Black Lodge” produced in a Peter Parker-centric limited series when Otto Octavius was running around as Spidey. I’ll touch on that story somewhere in the future, but it was based on a similar concept: healthcare for bad guys, run by bad guys.

When you get writers and artists who work together to insert a level of bizarre realism into your otherwise fantastical superhero universe, you know you’ve got a good thing. Nocenti’s concept here is brilliant and scary. “Mob-run mental healthcare.” Say that ten, twenty times and your skin crawls every time. It’s stupidly frightening to think about it being a thing, and so when you have Peter doped up to his eyeballs trying to rescue a poor woman from the clutches of mob-funded doctors, you feel that tension. 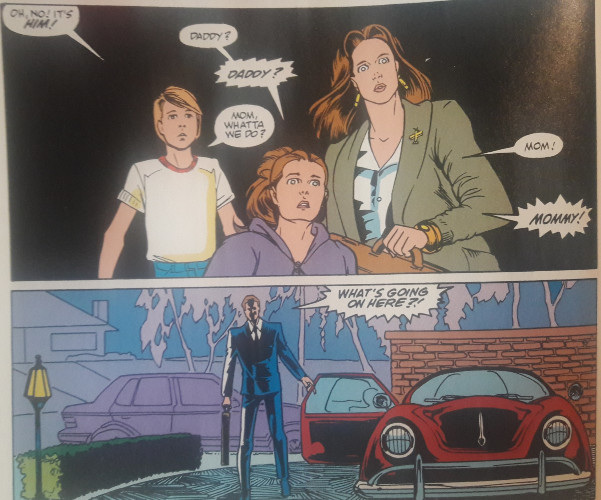 As messy as the narrative is, and as poor as the characterization can be, at least Nocenti imbues her story with a witty concept. “Life in the Mad Dog Ward” got a sequel a few years later, so prepare to journey back soon. We’ll see if the narrative can match the high concept next time around.