Spider-view: “Return of the Sin-Eater”

Peter David's sequel doesn't enthrall as much as the original, but it stands on its own by continuing an enticing story arc 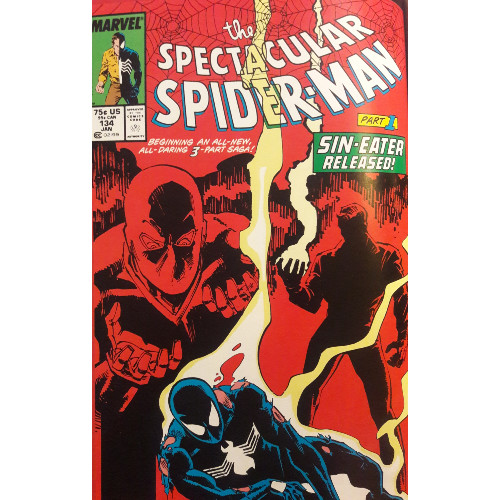 Two years after wrapping up “The Death of Jean DeWolff,” Peter David brought police-officer-turned-serial-killer Stan Carter back to the glossy pages of The Spectacular Spider-Man (which dropped the “Peter Parker” portion of the title with this storyline's first issue), teasing his reappearance before jumping into this arc wholly. I read this Sin-Eater sequel immediately after devouring the original and, admittedly, wasn’t nearly as impressed as I was with the DoJDW. It’s the curse of being a sequel, right? You try creating a story as good or suspenseful or impactful as your first go-around, and you’ve gotta write something entertaining while also trying to reach and top a bar you’ve already set pretty high in the first place.

A second reading, fortunately, has helped me see things in “Return” that I missed the first time. Let’s start laying out those pieces here and see if we can’t come to a better understanding of Peter David's daring, direct follow-up.

“Return of the Sin Eater” 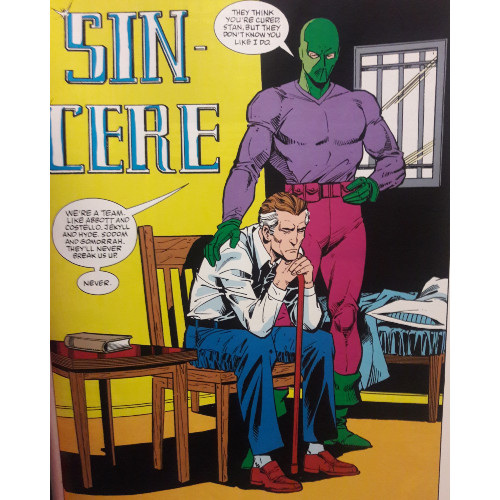 Similar to how a previous storyline, Spidey-title crossover “Life in the Mad Dog Ward” flowed from “Kraven’s Last Hunt,” so does “Return” begin in the SSM issues immediately following the “Mad Dog Ward” tale. Also similar to how “Mad Dog Ward” gave one scant reference to the story before it, so does David avoid any direct reference to Nocenti’s story. I say “direct,” because there’s a moment early on where Peter becomes upset with a review board that decides to release Sin-Eater Stan Carter from psychiatric care under his own cognizance. Having just read “Mad Dog Ward,” I wondered if Peter’s reaction was fueled, not just by the board’s decision to release a known serial killer, but by his own recent experience in a mental facility. David drops no hints that this is the case, but it’s where my mind went. Unless Peter David ever confirms this point for me (which I cannot foresee happening), it’s only theoretical. Honestly, since I didn’t find “Mad Dog Ward” to be as impactful as “Kraven’s Last Hunt,” I don’t think neglecting any references to that story is a huge deal.

David’s sequel to his now-iconic storyline sees Stan Carter, the former Sin-Eater, released back into regular society, as I stated, which infuriates Spidey. He goes to Carter’s apartment and finds a broken man. Carter has a permanent limp, talks with a stutter, and evidences a few other physical maladies as a result of Spidey’s punishing treatment of him in DoJDW. Spidey acknowledges this fearfully and, seeing the damage he’s done to a regular human being, subconsciously pulls his punches when facing Electro a little later. 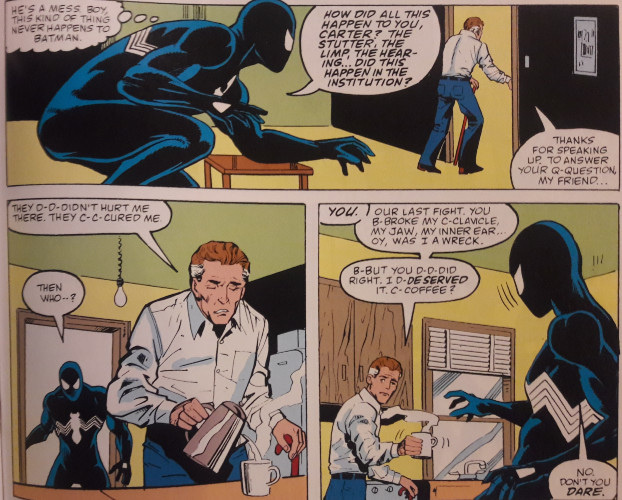 Spidey’s guilt weaves its way as a theme throughout this story, and you as the reader are challenged along with him. All of a sudden, the beatdown he gave Carter in DoJDW is painted in a different light; even though Spidey was pulled away before he could kill Carter, he still has to live with the consequences of crippling the guy. This internal turmoil drags you along with him as Spidey questions his strength and fears hurting other individuals unnecessarily. “Guilt” serves a common theme in Spidey stories—this is the dude who, you might recall, discovered the man who murdered his Uncle Ben was the same crook Spidey let get away earlier—and while it serves as an interesting topic, David doesn’t really do anything different with it here. We’ve seen Spidey go down this path before, and we’ve seen him rise up out of it eventually. His second confrontation with Electro (okay, technically, it’s his third, but their second interaction comes without any fighting) ends with him owning up to his strength and realizing that, yes, he can control his actions.

The story itself, then, is nothing new. Some of the characterization, however, is intriguing. I want to focus on two characters, primarily, Electro and Stan Carter, both of whom come across as a bit more interesting than Spidey even. 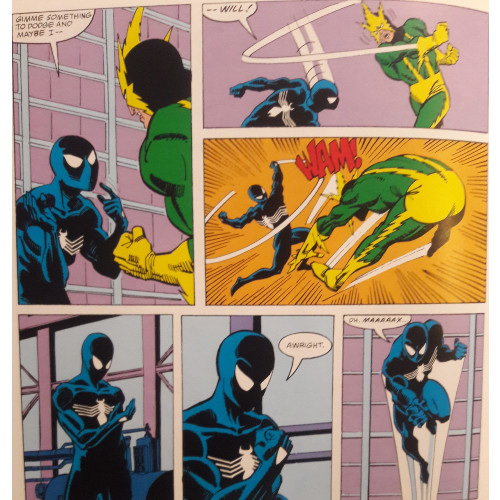 Electro doesn’t serve a huge purpose in the story—he’s there to challenge Spidey, to humiliate him, and then get his yellow-and-green-clad self handed to him by our hero by story’s end. But David brings something to the fore with the character in a couple instances that I genuinely appreciate. In their first fight, Electro realizes he can make Spidey’s ability to cling to any surface useless. Being the self-proclaimed “master of electricity,” Max Dillon’s alter ego realizes he can affect the “static cling” between Spidey and the walls he regularly adheres to. Later, he threatens New York with affecting power in the city—yeah, yeah, like he hasn’t done THAT before, right?—specifically life support units. Now that’s scary.

David fleshes out these small aspects of Electro and help make the character a more menacing for his story. Giving Electro a new dimension to his power and making him threaten something as specific as shutting down life support machines in hospitals rather than shouting random “I’m gonna hold the whole city ransom!” gobbledygook, makes the villain more frightening than he typically is. These story beats reminded me of how Mark Millar uses the villain in his Marvel Knights: Spider-Man arc “Down Among the Dead Men.” It isn’t just that Electro can shoot electricity from his hands; it’s that he can manipulate or destroy electrical devices, things that we in the real world use on a regular basis, and that fact makes him more personal and scary as a villain. Well done on David’s part. 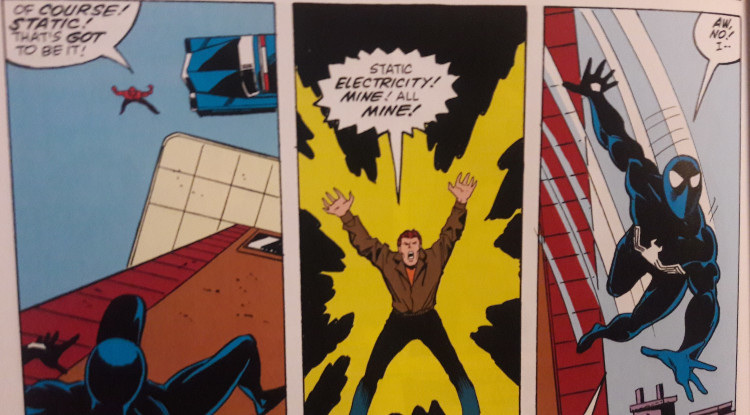 David’s treatment of Carter also stands out. The first time I read this story, I wasn’t all that intrigued by how David handled the character. One moment that sort of bothered me was an admission by Carter that he and Jean DeWolff had been involved with one another romantically, and while David doesn’t say Carter killed her in a domestic squabble, the insinuation might be there. Carter’s confession in the original story—“I killed her because I felt like it”—might indicate he killed Jean out of an uncontrollable and violent urge. The review board early on in “Return” implies he murdered her because of his warped view of a failed justice system, with Jean representing police officers. I do think that Carter’s confession of love for Jean was intended to make him more sympathetic, but I feel like it more so muddies the waters for anyone trying to deduce his M.O. It also makes Jean’s crush on Spider-Man (as revealed shortly after her death) a little awkward, especially if she really was in a relationship with Carter before she died. 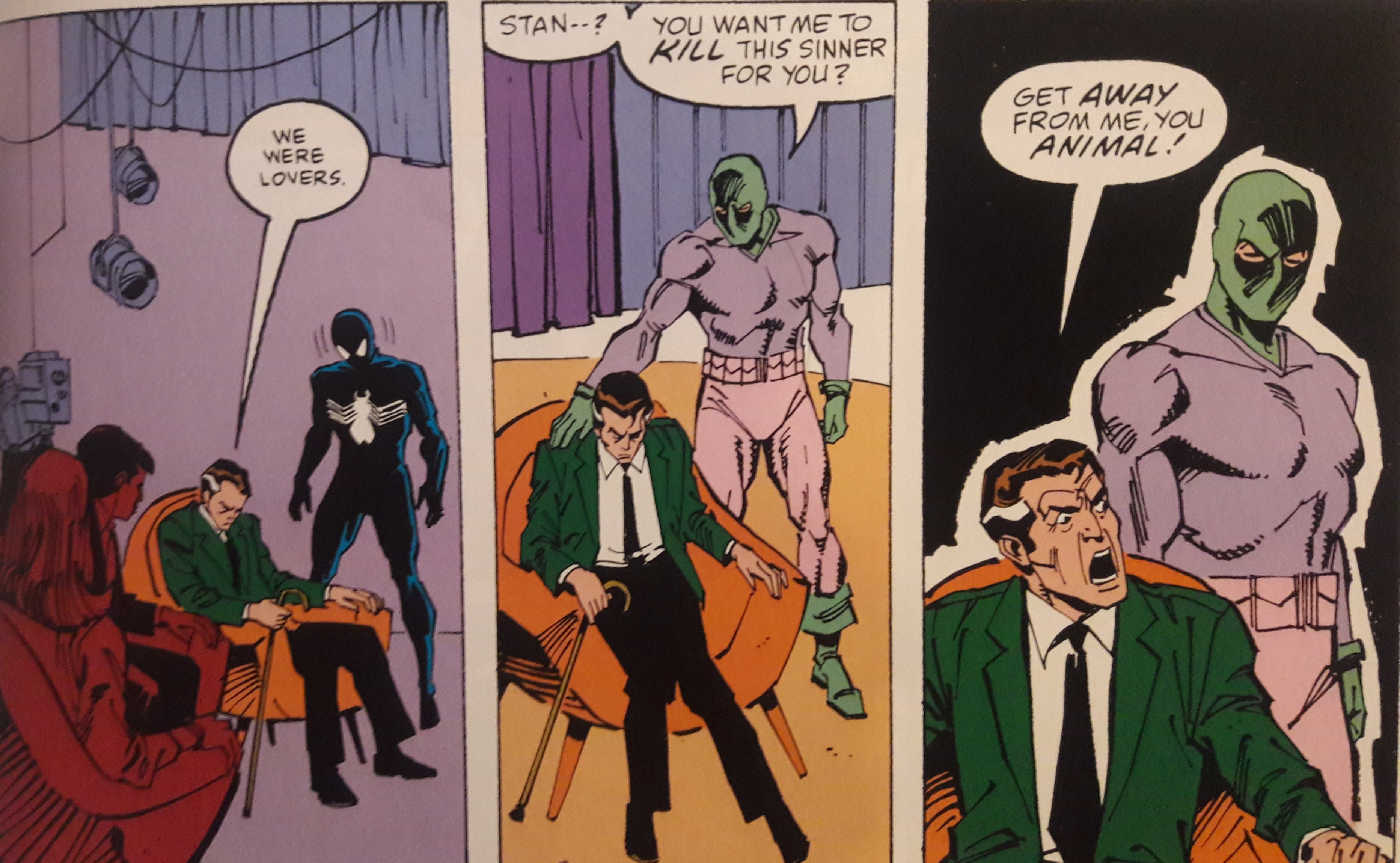 Other than this, I really do enjoy the direction David goes with the character. The entire story, Carter is haunted by a “ghost” of Sin-Eater, and you’re never quite sure if Carter is going to be convinced by this imaginary spirit to pick up his gun again or if he will take control of his life and set aside the legacy of the Sin-Eater completely. As the story moves along, you find out it’s a little bit of both. I’d rather not spoil the ending, but I think that during this second reading, I found the resolution to Carter’s internal struggle more impactful. David wonderfully jostles the reader around, always teasing, somehow managing to pull threads together to successfully find a balance of sorts between these two dynamics.

I can’t say the writing in this story is as crisp as DoJDW, nor is Sal Buscema’s art as detailed as Rich Buckler's. I’ve recently learned to set aside previous negative notions towards Buscema’s art—my disappointment in the work he provided during "The Clone Saga" has been balanced out by engaging craftsmanship seen in The Mighty Thor. He strives admirably here, doing his best to put his unique polish on this more down-to-earth arc. David’s prose, though not as witty, still has several high points. A sequence where Carter spends time looking for new employment gives us insight into his mind and how others view him in light of his deeds. Another page sees him talking to someone about a book deal, with Carter claiming he doesn’t need a “ghost writer” since he already has one, as the specter of Sin-Eater stands by his shoulder. Moments like this make the story entertaining, but they’re not as consistent as David’s work on DoJDW.

Saying this makes me realize that, unfortunately, “Return” is always going to be inherently tethered to DoJDW in my brain, primarily because it’s a sequel. “Return” directly grows out of the events of that story, and though I think David could have used it to more impactful effect, answering the question of “Whatever happened to Stan Carter after the events of DoJDW?” is not a bad idea for a story. I don’t know if anyone was ever really wondering what exactly happened to Carter, but at least the concept feels organic. A preestablished character is fleshed out well in this sequel, and even if the “romantically linked with Jean” subplot feels a tad sudden, Carter feels less like your standard villain and more like an actual person in this story. In that, David succeeds, even if some of the minor pieces that make the original story so enthralling don’t coalesce as well here.