Peter David's two-parter narrative connects nicely to the recent past, weaving in multiple pieces in a largely cohesive manner 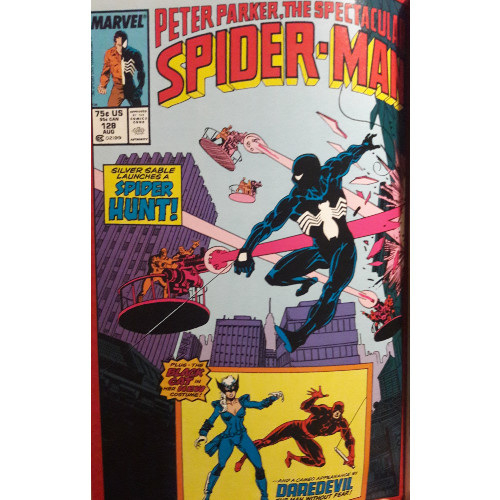 It’s at this moment that our narrative shifts, dear reader. For the last several posts, I’ve been examining stories in rather rapid sequential order--the “Alien Costume Saga” was examined on a chapter-by-chapter basis, and we saw that even some recent annuals connected to each other or past or future stories in interesting ways. Even with this story, we’ll find some fun connections.

As I’ve remarked before, I don’t own many standalone issues of the original Peter Parker, the Spectacular Spider-Man series, as most issues have not been collected in many major volumes by Marvel (still, still hoping on the Epic Collection line). Still, every so often, a small tale gets cobbled together between two covers. That’s the case with our story today, which sees Spidey alongside two silver-haired women of mystery and intrigue. 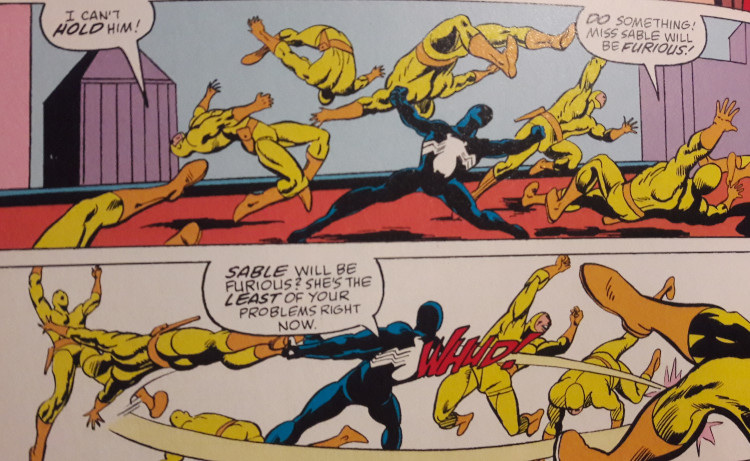 I sort of stumbled upon these issues, one might say, the same way someone unexpectedly stumbles upon a dead end when they turn into what they think may be a potential avenue. Luckily, unlike our fictional wanderer, I was not beset upon by muggers or robbers demanding my money...unless you attribute those characteristics to Amazon. Simply browsing their website’s Spidey merchandise, I came across a small volume containing Spidey’s adventures with Silver Sable, the mercenary leader of the Wild Pack. I figured I’d pick it up, see what was inside.

I could have, admittedly, written a few posts pertaining to the Amazing Spider-Man issues contained in the volume that introduced Sable, but alas, such was not to be. Perhaps at a future date. For now, all one must know is that Sable has worked with Spidey in the past...but perhaps not so here.

Our good friend Peter David delivers a story that ended up being more fun than I thought it was going to be, and admittedly, much of the tale’s entertainment delivers from how well David associates it with recent continuity. To my surprise, David tethered this two-parter to several recent strands. Spidey’s breakup with Black Cat from the 100th issue of this same series is referenced at large, particularly as Spidey had apparently been seeing the Cat again (?) at the time this tale was published. Spidey’s decision to date Felicia a second time is a somewhat perplexing one to me, and though David doesn’t expound on the reasons why Spidey chose to reignite his relationship with his one-time beau, the writer makes it clear how foolish of a choice it is. 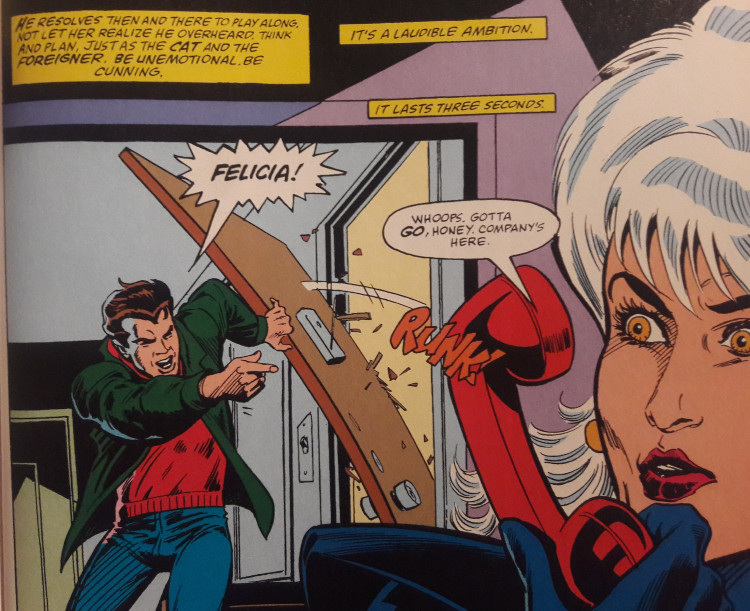 As I mentioned a few times while examining the “Alien Costume Saga,” Al Milgrom wove a weird web when crafting and then dismantling Peter and Felicia’s earlier relationship. He took his time, occasionally bringing the relationship into a tailspin before righting it, only for the winds to kick up again before crashing the plane completely. I can’t tell you the events that led to the two getting back together, but David doesn’t necessarily paint the roller coaster that Milgrom invented. I admittedly waffled with David’s depiction of the characters--Peter seemed perhaps a bit too comfortable being with Cat again, especially after the circumstances which led to their first break-up. Yet, when the hairball hits the fan (total shocker, I know), David has our hero react appropriately. Al Milgrom’s wishy-washy protagonist is, gracefully, replaced by David’s more firm Peter Parker. Peter takes some crap from the Cat in this story, and David shows us a Peter who will no longer be pushed around by someone he clearly cannot trust.

David also connects this tale to his own recent stories...and not the mediocre ones. A detective named Tork (who Christopher Priest used briefly in his Black Panther series) encounters a beaten, stuttering Stan Carter, the former Sin-Eater who murdered Jean DeWolff. We’ll actually be examining a Carter-centric story arc a few posts from now, so I highly appreciated the nod by David. Knowing that later story and what occurs, I’ll just say David does a nice job setting up some plot elements here that he’ll latch on to in the future. I couldn’t say if he seeded other references to that then-upcoming story arc, but even if this was the only reference, David clearly has a handle on his narrative. He knows where he is, and he knows where he wants to go. 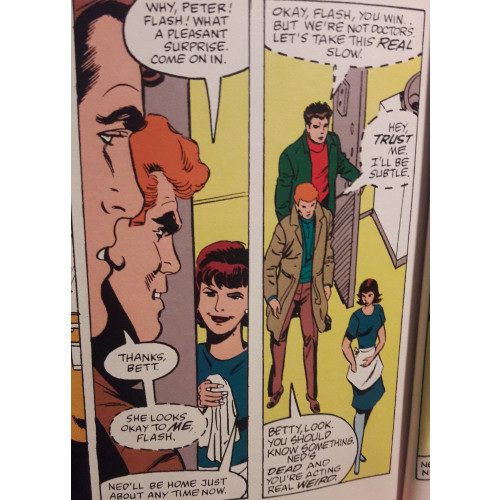 The messy “Hobgoblin Saga” even gets a shout-out: fans who recall that Christopher Priest murdered Ned Leeds (no, not physically, he had characters do it, gosh!) in the Spider-Man vs. Wolverine one-shot may or may not be aware that later writers set the deceased reporter up as a patsy for the real Hobgoblin (or, if I recall correctly, Ned was intended to be the real Hobby at the time). David steers clear of that debacle, but weaves in a subplot for Betty Leeds/Brant where the young woman almost appears a bit mad, not accepting Ned’s death. Scenes where Peter and Flash Thompson visit her to comfort her read as zany when Betty starts mentioning how Ned will be home for dinner. It’s wonderful writing on David’s part, delivered as good development for Betty as struggles with coping with Ned’s death.

If you started thinking that David was only good for calling back to past history, think again. Though this two-parter isn’t one for “the books,” as they say, David holds his own fairly well in developing the story. Mysteries are deepened, relationships are made complicated, answers are given to long-running plots. David presents his story as a “murder mystery” of sorts, weaving in enough twists to keep you reading each page. He doesn’t skimp on action either. The first issue contains a nifty set piece where Spidey slugs it out with Silver Sable’s goons as they ride aboard hover vehicles. The high-flying action allows Spidey to do some fantastic stunts and gives penciler Kupperburg the chance to stretch his creative muscles as he choreographs the whole sequence. 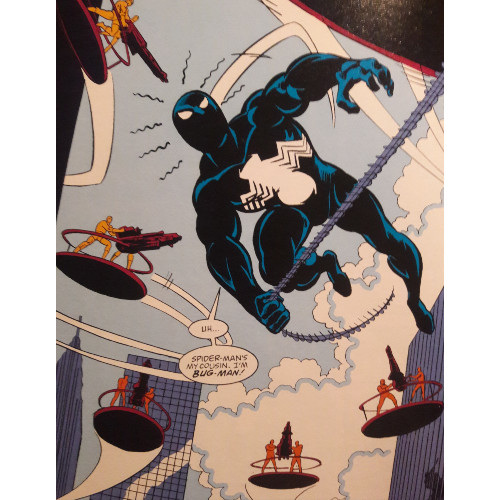 David tries to stretch his muscles, too, weaving in a very late twist in an epilogue that doesn’t work quite as well as I wish it had. Silver Sable, though billed in the first issue, doesn’t have as much an impact on the story as she could have. Much of the plot centers on Spidey and Black Cat as Spidey tries to uncover the real killer behind a murder he was framed for (which leads me to wonder: how many times does Spidey have to clear his name before people decide to just stop framing him for crimes he never commits?), with appearances by a criminal named the Foreigner, the man behind Ned’s death. David's gaze is centered on this developing plot, providing Sable with too little page space to contribute anything significant to the overall story.

Could David have seeded details about Sable’s involvement in earlier issues I just don’t own? Perhaps. This would make Sable’s inclusion akin to David’s later story with Stan Carter, a tale prefaced elsewhere before revealed totally. Maybe he built up some tension and action I am not privy to. Yet with this story, Silver Sable leaves less than an indelible impact, save for a particularly entertaining action sequence. If David had removed her, most of the story would run the same course…

...save the ending. David pairs Sable with a character at the very end that doesn’t necessarily change the rest of the story but gives slight insight into both characters involved. Part of me applauds the twist ending for how out-of-left-field-yet-reasonable it ends up being. The connection is one, I assume, that hadn’t been alluded to before, and David springs it on the reader. Yet its impact is dulled once you remember how little Sable has actually influenced the story--and from what I can tell, David doesn’t play with these strands in future issues either. Thumbs-up to Nick Spencer for recently bringing Sable back (okay, fine, Slott did some work with her too), expounding on the idea David introduces here. But there exists a thirty years difference between both tales. I just wish David had played some more with the ideas he plants in these issues.

As a standalone story, David’s work here is better than some of the other tales of his we’ve reviewed, particularly his annuals. And David’s ability to drum up the recent past and unify several disparate strands should be praised as well. If anything, David convinced me I really want to read more of Peter Parker, the Spectacular Spider-Man than I already did. I want to fill the gaps in my collection, so thanks to Peter David for that unforeseen encouragement. Silver Sable aside, David’s narrative works fairly well, continuing plots we’ve already discussed and elaborating on recent history. Part of my love for comics stems from how expansive the universe is, how even a small, seemingly unimportant two-part tale such as this one can have connections to three or so other stories. David creates a story that, while imperfect, nevertheless integrates itself nicely into the ever-expanding world of Spider-Man.