The sequel to Peter David's original annual fares a tad better than its predecessor, but that still isn't saying much 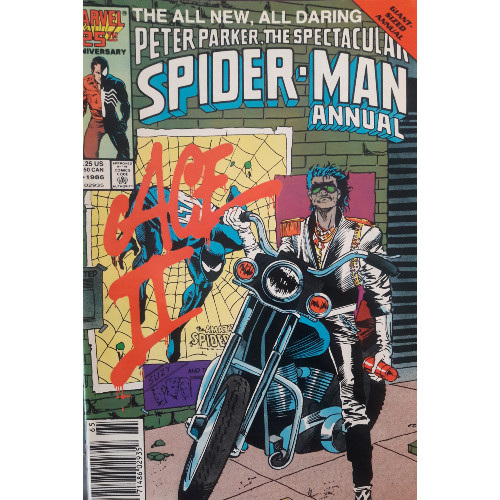 A few posts ago, we examined “Ace,” a Peter Parker, the Spectacular Spider-Man annual delivered by Peter David. Introducing the issue’s eponymous hero, David crafted a character who was, by and large, a precursor for greater things from the writer. Though art by Mark Beachum spoke volumes for a character who spoke little, David bobbled some portions of the narrative, creating something a bit subpar when considering the rest of his storied bibliography.

A year later, David brought Ace back for 1986’s PPSSM annual. As we head into the sequel, we’ll discover whether or not David improves upon his previous creation. 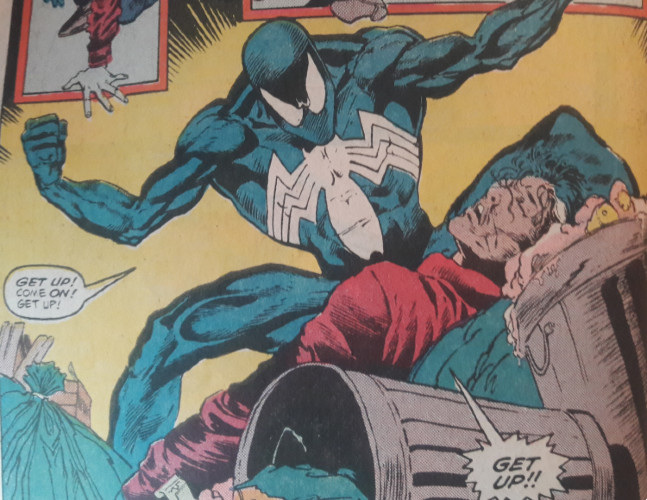 The premise of “Ace II,” as the issue opens, is a bizarre one at best. Spidey, haunted by dreams of his defeat at Ace’s hands in the last issue, wrestles with doubts and almost subconsciously wishes for a rematch. Right away, the tight prose Peter David gobsmacked me with in “The Death of Jean DeWolff” seems to have skittered away from the writer. David spends a good page following the dream sequence detailing the past, having Peter wander from thought to thought about Ace...who, coincidentally, pops up a page or so later and back into the Wall-Crawler’s life.

David appears really interested in Ace as a character and simply shoehorns Spidey into the story because, well, it’s a Spider-Man mag! What else are you gonna do but have Spidey star in a Spidey series? Thus, we get an awkward sequence where Peter visits his Aunt May in Forest Hills during a neighborhood garage sale. He momentarily reflects on the loss of Uncle Ben, kicks a beloved stuffed bear underneath a table to hide it from the neighbors, promising to come pick it up later (which he never does), and makes the forced comparison between his strong-willed Aunt May and his own personal wimpiness as he cries over being beaten by Ace previously. The scene feels out of place, slipped in as David’s method of transitioning Peter Parker from a selfish crybaby to a more upstanding hero, undeterred by being beaten by one lousy thug. It's supposed to be a breakthrough, a moment of inner triumph for our hero as he reflects upon and chooses to overcome his own selfishness. If the scene had been longer, it might have worked better in David's favor. In its published form, however, the scene unspools far too quickly for it to retain any dramatic impact. 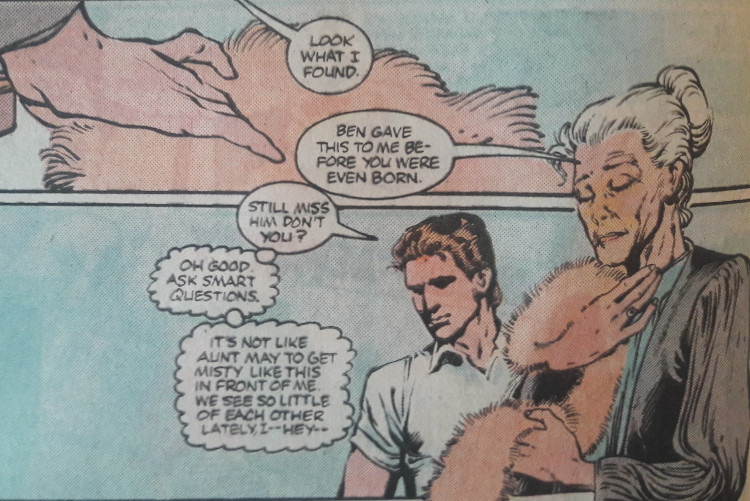 That “lousy thug” fares a bit better, at least when held up against both Spidey in this issue and Ace’s own first appearance in the previous annual. David allows the character a tad more dialogue than he received in his inaugural issue and uses it to Ace’s benefit. Ace, convinced after the last issue that he’s been entrusted with caring for his neighborhood, becomes a vigilante of sorts, tearing through thugs who dare threaten the safety of loved ones. Gone is David’s attempts at providing awkward backstory for Ace; instead, we’re given a few panels delving into his mother’s past. Unnecessary it may be, but it’s the one moment in the comic where David finds his typically poetic voice.

I can’t complain that David doesn’t allow Ace to grow...he does. Skidding onto the scene, Ace looks more like a Michael Jackson/Prince hybrid than ever and, when he’s not ripping off famous pop artists, appears to have come into his own as a hero in his neighborhood. The scenes where Ace trashes thugs and defends his family work well for the character, showing a nice transition from the last annual to this one. 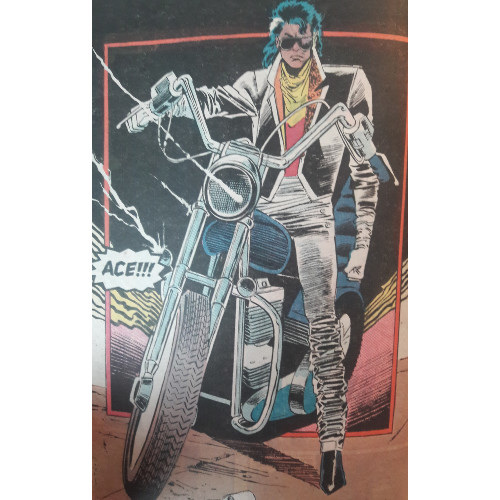 Yet, narratively, even Ace stumbles as a character. A courtroom scene where Ace intends on testifying against his brother goes horribly wrong when the young man chooses to be unresponsive during a tense yet integral moment in the unfolding drama. Reading it, you’re supposed to get the sense that Ace is fed up with the injustice of a courtroom system that doesn’t respect him. Unfortunately (perhaps due to page length), Ace’s mental switch from cooperative witness to punk happens almost instantaneously, meaning any sense of empathy towards Ace is lost in a flash. Were David to let the tension mount, give the reader time to wrestle with Ace’s discomfort, the scene would work much better. As it stands, Ace’s hasty decision to be mute and angry makes him come off as a brat...and his insistence in later pages that he tried doing the right thing doesn't help. I mentally threw my hands up and went No, you didn’t! when those sentiments began flowing.

Problematically, David is just trying too hard to yank too much connective tissue from his first annual to carry over in the sequel. Peter’s vendetta against Ace, Ace’s testimony against his brother, Ace’s newfound protective role in his neighborhood...and that’s not all. Stuffed into this issue are additional subplots, focusing on Ace’s mom’s failing health and the Child Welfare Bureau’s attempts at relieving Ace’s sister from his less-than-adequate care. Each piece is given a segment at a time, chopping the issue into so many pieces that a coherent story fails to congeal.

And that doesn’t even include brief mentions of Ace’s victory over Spider-Man in the last annual...it’s remarked upon a few times that Ace’s ability to dodge Spidey’s attacks may be due to superhuman abilities rather than athletic giftedness. This idea is only deepened when it’s suggested that Ace can also cancel out Spidey’s spider-sense, a brand new piece of information introduced in this issue. Again, it’s yet another element tossed into this blender of an annual...but the blender is kinda broken and doesn’t really smush everything together in a nice smoothie.

I’ll fully admit, this issue has (or had) promise. Several good ideas are brought into play here. Surmising that Ace’s mastery in hand-to-hand combat may be superpower-related is an interesting take...but only if it was adequately explored. Ace warding off Child Welfare Bureau Guy would be a fascinating subplot...but only if he were given the time to properly prove his ability to provide for his sister. Spidey’s grudge against Ace, coincidental at best, out-of-character at worst, would make for some engaging character development...but only if he were allowed consistent attention. Ace coming into a role as defender of the neighborhood would be an interesting angle for the one-time-gang-leader...but you know the drill by now. Space, space, space. David pulls in five or six interesting ideas but, even with the larger page length given to annuals, can’t do much with any of them collectively. 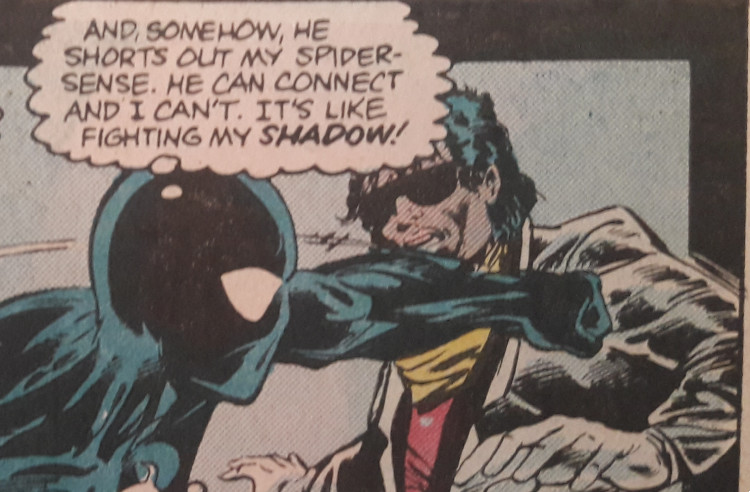 “Ace II” is a rare disappointment, especially considering the master wordsmith behind its development (or lack thereof). The story doesn’t feel like one that David necessarily intended on telling--aside, perhaps, from the lingering “Ace testifies against brother” subplot left unfinished at the end of the original annual--and though I don’t think this annual was editorially mandated of David, I wonder if he entered with much of a plot in mind. As a result, the annual is rather slapdash, a cacophony of ideas that don’t work in tandem nearly as well as they should. And they absolutely should--like I said, earlier, the issue has some intriguing concepts behind it. David is just unable to find the right balance between his jumbled components, leaving the feeling that Ace should probably just “Beat It” before he’s subjected to another subpar narrative.