This second complete collection isn't perfect, but it's a far cry better than its disappointing predecessor 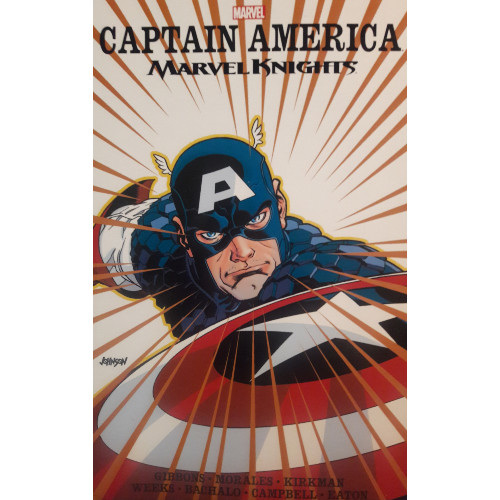 In a previous (Strand)om Stories review, we analyzed a volume containing the first half of Captain America’s Marvel Knights series. I complained that this first “complete collection” was a mixed bag, containing stories that felt stubbornly, obviously patriotic and pitting Cap against enemies who weren’t all that interesting. Additionally, a late plot twist hampered the current story being told--by revealing that Cap had been intentionally encased in ice by the government, writer Chuck Austen laid out a very controversial premise in typical Chuck Austen fashion, failing to provide any semblance of follow up or additional exploration. The twist, though intriguing, failed to capture the imagination or enhance the plot.

In all honesty, much of what is presented in the first volume acts similarly. Writers weave in interesting ideas and “out there” concepts, yet none of those ideas are sufficiently fleshed out or examined. Cap fights a terrorist with deep pockets, a clear vision, and an organization that seems to have infiltrated levels of authority, but nothing comes of it. Slathered with patriotic rhetoric, the stories come across as big, bold, and brash but ultimately fade with a whimper.

As we dive into this second volume, we’ll have to see if the writers and artists assembled do more than their counterparts in the previous collection.

And what better weekend to do it on than the 4th of July holiday? 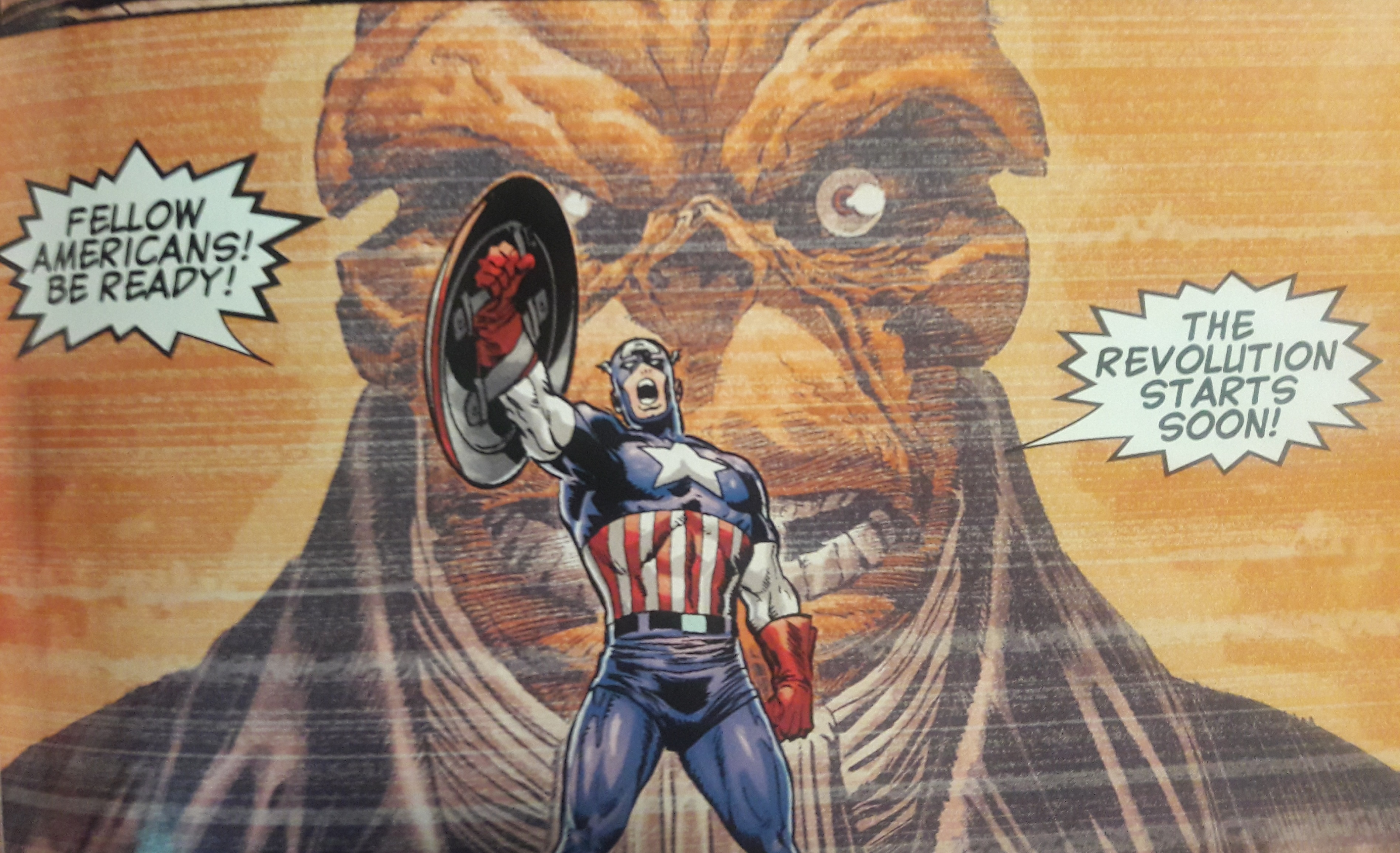 To begin, I’d like to (a. point out the sheer number of talented individuals drawn into this volume and (b. make a necessary distinction. First, check out some of the names we have listed above. For writers, you’ve got Dave Gibbons (the penciler for Watchmen), Robert Kirkman, Paul Dini, Bruce Jones, and Mark Waid among some of the more popular authors here. For artists, Lee Weeks, Chris Bachalo, Alex Ross, Bruce Timm, Frank Quitely, and Bill Sienkiewicz all appear here, offering their skills.

Second, the distinction: Most of the writers and artists listed work on the Red, White, and Blue one-shot, an anthology issue I assume was intended to honor the one-year anniversary of the 9/11 terrorist attacks. This one-shot appears at the end of the volume, divorced from the stories preceding it. The issue alone is a mixed bag of interesting and ho-hum stories. Goofily-drawn tales look weird juxtaposed against more serious tributes to war and freedom. Unlike the stories in our previous volume, none of these tales feel overbearing or obnoxious; yet, there’s nothing to indicate this is a tribute to 9/11. The tales are sort of random, slapped together in no discernible order. Heck, credits don’t even pop up in the stories themselves, meaning I only found out about the creative teams when looking at the volume’s title page. I had no idea Mark Waid or Frank Quitely or Bill Sienkiewicz contributed to this issue. Would I have enjoyed it more had I known? Perhaps. Then again, considering the quality of these stories, I’m not sure I want to know Mark Waid wrote one of the tales within. 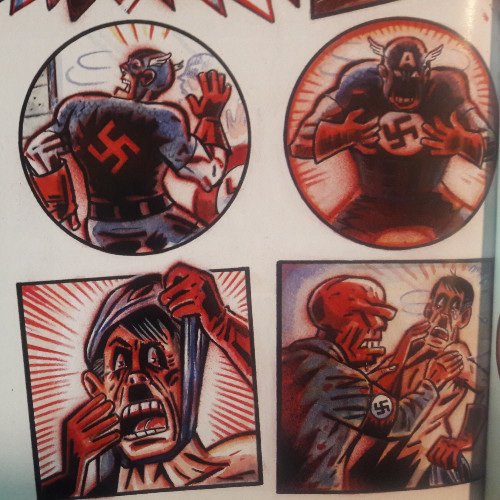 The bulk of the volume, however, is dedicated to the second half of Cap’s Marvel Knights series, with a much smaller creative crew. Dave Gibbons, Robert Morales, and Robert Kirkman lend their skills to five main plots, with Lee Weeks, Chris Bachalo, Eddie Campbell, Stewart McKenny, and Scott Eaton providing illustrations. Overall, these narratives fare better than their counterparts in the first volume. Gone, for the most part, is the overbearing political rhetoric. By this time, I surmise, people had a better grasp about what happened on 9/11, allowing the teams here to shy away from anger and fear and embrace tales more accustomed to superhero fare.

Rhetoric exists, but it feels quieter. Credit should be given Robert Morales and Chris Bachalo for crafting a five-part narrative focusing on Cap journeying to Guantanamo Bay where he’s set to serve on a tribunal for a Muslim prisoner. Lots of politics and viewpoints get tossed around, but Morales is wise by moving away from overt fervor. His wording is careful as he presents multiple characters with differing viewpoints, clearily pointing out wrong from right and having Cap genuinely wrestle with the situation at hand. This isn’t an angry Captain America ready to smash terrorists in the face; Morales’ Cap is guarded, thoughtful, responsible. 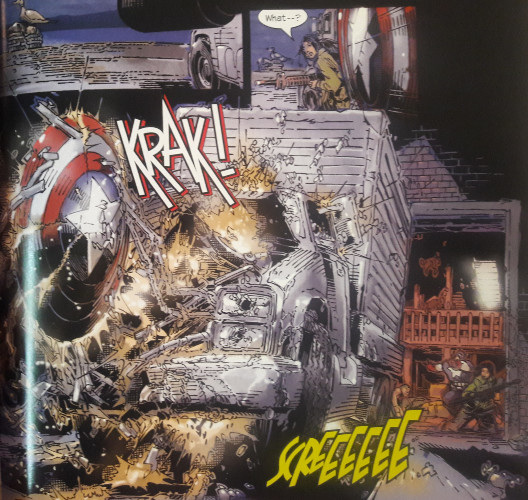 Morales should also be praised for bringing in some much-needed continuity. Tales from the previous volume felt like they fit into an anthology; nice little stories, cut into distinguishable pieces that had little impact on each other. Morales instead chooses to take elements from past tales and insert them here. Presidential candidate Lester Paley pops up here and there, as does Cap’s new girlfriend Rebecca. Both characters serve as links to a couple different stories that Morales works on, allowing readers to smoothly transition from one tale to the next without feeling bopped around like they’re being driven without a seatbelt. 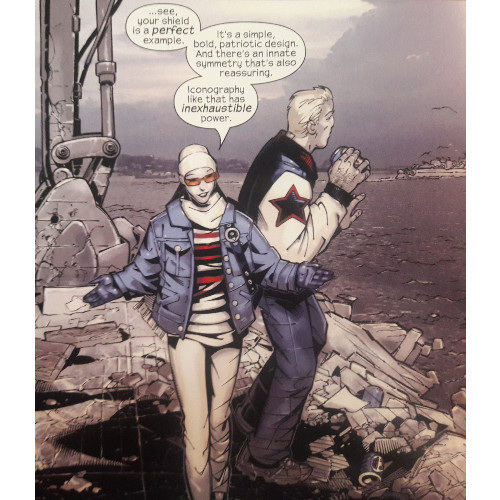 I do want to focus on the volume’s opening tale, “Captain America Lives Again,” as it certainly marks my favorite of the bunch. Gibbons and Weeks go off the rails as they introduce an alternate universe where Cap’s frozen body is discovered, not by the Avengers, but by Nazis. Readers are ushered into a world where the Red Skull has conquered America--New York has become his playground, typified by the Albert Speer Dome rising in the distant Manhattan skyline, neighboring the famous Baxter Building. You can tell the sheer fun Weeks is having in designing a Nazi-fied America, as well as how much Gibbons is enjoying the “alternate universe” aspects. The Red Skull is supported by a legion of robotic Iron Men designed by a seemingly traitorous Tony Stark; a band of rebels includes Peter Parker, Stephen Strange, Luke Cage, Reed Richards, Dum Dum Dugan, and others; James Buchanan “Bucky” Barnes, having survived the exploding drone which “killed” him in the 616 Universe, appears alive and well, a few years before Ed Brubaker would toy with the same concept.

The story carries some Man in the High Castle vibes, particularly in how Weeks visualizes the world and Gibbons’ introduction of Victor von Doom’s time platform, which acts similar to the “reality hopping” machine the Nazi develop in the Amazon Prime show (which, yes, I know, is based off a book). I dunno if Gibbons was inspired by the original novel, but certain threads weave their way throughout the tale. Copy or not, Gibbons and Weeks construct perhaps the strongest narrative in the whole collection; while not overly poignant, it’s a fun exploration of a potential Marvel Universe. 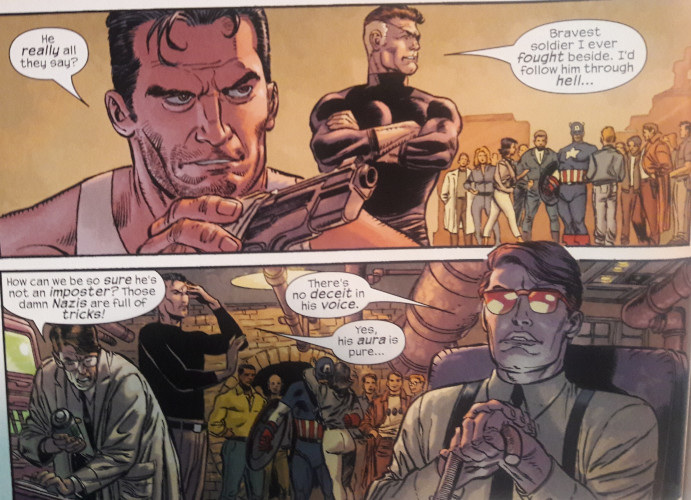 The other stories in the volume are all interesting, but none of them stand out the way the Gibbons/Weeks tale or the Morales/Bachalo tales do. Admittedly, I’m a sucker for both Weeks and Bachalo’s art, so having them around certainly helps things. The other tales are interesting, but feel more attuned to Captain America fans. Dealing with Bucky, Diamondback, the Red Skull, Batroc and Leaper, and Isaiah Bradley, these stories rely on understanding prior Captain America lore, of which I am not very knowledgeable. I know who the characters are, but I don’t understand the history that would probably enable me to get more enjoyment from the stories. As a result, these remaining narratives don’t do much for me beyond entertainment. Certain plot threads are woven along amusing lines--the developing relationship between Steve and Rebecca, the use of LMDs, a revenge plot by the Red Skull--but nothing is taken far enough to elicit more than casual interest. Somewhat similar to the first volume, I do wish the writers and artists involved had stuck with certain plot elements or developed them further. Again, the volume has an anthology feel to it, temporarily broken up by recurring characters and references.

Where the first volume of Cap’s Marvel Knights series was disappointing, this second volume is boosted, largely by comparison. We get some better writing, better plots, and a lot less patriotic seething. Not that comic book stories steeped in current events aren’t good, but if they’re written poorly, they come across as blatant and crass. This volume expertly avoids that, stepping carefully through a proverbial minefield. Overall, Cap’s series doesn’t reach the heights of those of his Marvel counterparts--particularly Black Panther, Daredevil, and Spider-Man--lacking the tight writing, character development, and overarching plot elements found in those series. I won’t tell anyone to stay away from the series, but I’ll caution them about approaching it. If anything, don’t come for the rhetoric, but stay for the art. The writing may not always be up to snuff, but John Cassady, Jae Lee, Lee Weeks, and Chris Bachalo make the series more enjoyable despite the flawed words.

This Captain America isn’t as angry as the guy in the previous volume; this Captain America isn’t about punching terrorists in the name of patriotic fervor just to get a “rah rah!” from readers. The Cap presented here is genuine, a true defender of people and ideals who protects because it’s his purpose, not simply out of anger or revenge. This Steven Rogers hews closer to his ideals, and in at least one story, is challenged to look at them through a different angle. We can all probably agree that terrorism is awful, but just wagging your finger and going “Bad, terrorists, bad!” isn’t gonna get you anywhere. Fortunately, the creative minds behind this volume understand that, distancing themselves from overt pedagogy and working with something a bit subtler and more symbolic. By and large, they succeed. Cap’s personality brightens as a result, a much needed change from the first “complete collection.”