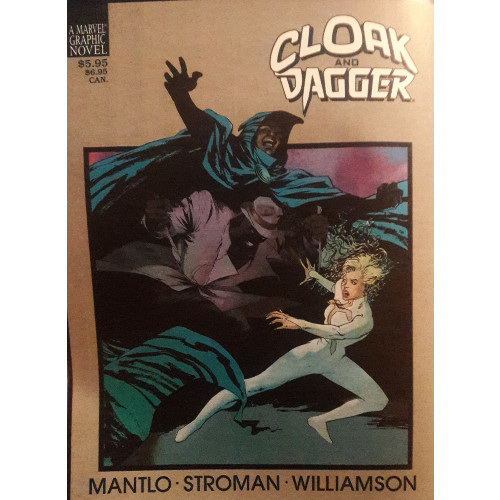 When I reviewed Cloak and Dagger’s last standalone series, Strange Tales (which they shared with that Master of the Mystic Arts, Benedict Cumberbatch), I made a note of one particular detail: Strange Tales, which started in April 1987, spoiled two plot points from this graphic novel, Predator and Prey: first, that within Cloak’s cape of stygian darkness existed a demon that fed off the light that Cloak devoured (yipes!). Second, that Father Delgado, keeper of the Holy Ghost Church, had been imprisoned. As I stated in that post, I became genuinely confused stumbling onto those details, as I skipped over this graphic novel to maintain chronological cohesion. Strange Tales had been in publication for over a year before Predator and Prey was released.

Well, at last, we can dive into this narrative and see how well those two elements were handled. Admittedly, it’s somewhat confusing that Bill Mantlo would introduce such earth-shattering concepts in a one-off graphic novel, but given the line was intended to be a premier presentation of storytelling, I suppose he was hoping to go all out and tell his tale in the biggest, glossiest format possible (one could also make the same argument for the Death of Captain Marvel, ending the life of a prominent figure in a graphic novel separate from any primary series, though again, perhaps the prevailing counter-argument would be that Jim Starlin, who wrote and illustrated the story, saw the graphic novel imprint as a unique stage from which to perform his tragedy). Weird as it may be, Predator and Prey, at the very least, fleshes out those two particular details, thus altering the lives of our duo forever. 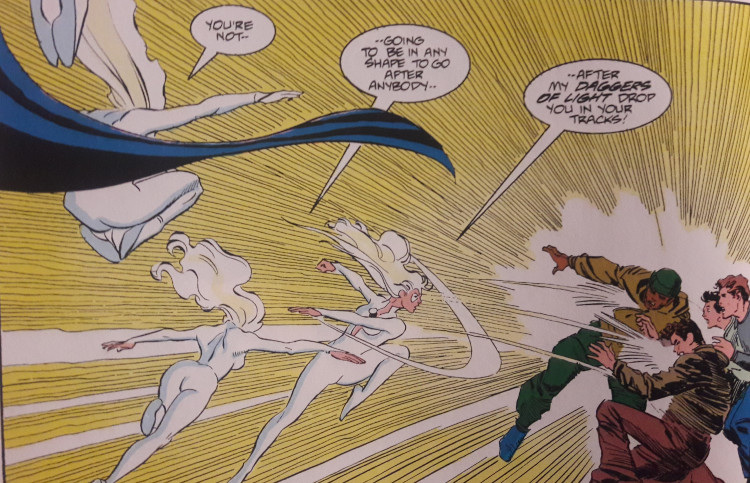 For the curious, the Father Delgado subplot is not handled well.

Just in case you were wondering.

In prior series, Mantlo had juggled the idea that Delgado deeply distrusted Cloak and felt a somewhat odd affection for Dagger--constructed as fatherly, in a way, but hinted at as a more romantic attraction. Weird and off-putting but relatively tame. Mantlo doesn’t double down on that idea much here, but he also doesn’t do much with it either. Unable to remember much of the graphic novel from a previous read, I was hoping for a more fleshed-out plot with Father Delgado, one which would have seen him descend into a madness of a sort, eliciting his incarceration. But that’s not what happens. He explores a few “forbidden texts” on the occult and toys with the idea of performing an exorcism on Cloak and that seems to be enough to have him shunted into a paddy wagon. We’re not even given scenes of him being discovered or going a little crazy. He reads a few books, splashes some holy water onto Cloak, ruminates about performing an exorcism, and next we know, he’s carried off to the funny farm. 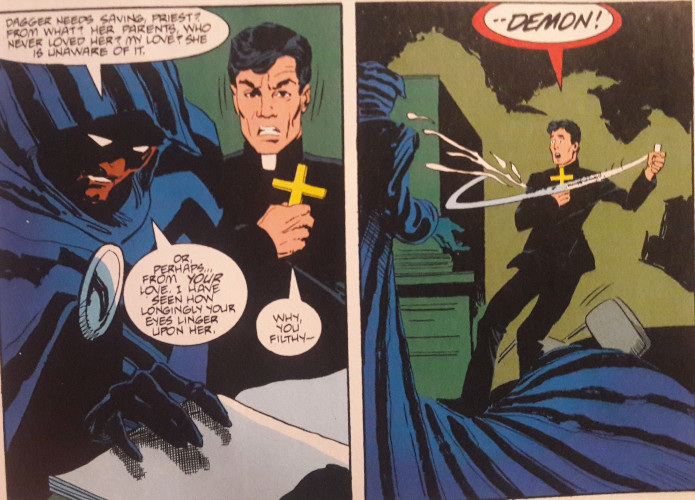 I’m not arguing against Mantlo’s decision to take the character down this path. Honestly, in earlier issues, I found Delgado’s degradation a little bizarre. Mantlo seemed to jump aboard a “religious figure is hyper religious” train when creating Delgado, sliding in a little “...but is secretly morally ambiguous like the rest of us” subplot when it seemed convenient. Not that I necessarily found his depiction of the character distasteful or incorrect--heaven knows not all religious leaders are upstanding people--but from almost the start, Mantlo approached the character with a certain disgruntlement. Shortly after his introduction, the seemingly kindly priest goes the way of the fanatic, blind to all possibilities except the ones he so steadfastly considers as true. I just never appreciated that Mantlo seemed to run out of ideas for the priest early on and went for, perhaps, the most convenient narrative possibility. “Hey, let’s make the super religious dude a nutjob!”

In what should be the culminating moment of Delgado’s degradation, he’s given the boot, slid to the sidelines, and told to wait for Mantlo’s main narrative to progress. Thus, in the graphic novel’s final pages, when Delgado’s fate is revealed, you’re left with a kind of “Huh?” If you’ve read Strange Tales at this point, yes, you’re aware of his institutionalization, but for anyone coming into the graphic novel blind, the transition from “priest” to “prisoner” is rather abrupt. Enhancing this notion is the fact that no one makes a huge deal about Delgado’s obsession with Dagger; the light-wielding lass blows up emotionally at the priest at one point but this is more about his “Cloak is a demon” spiel than anything else. She never questions his sanity, merely his long-standing distrust for and distaste of her friend. Mantlo had brought up Delgado’s overprotectiveness of Dagger in prior stories, so while this is a progression of Delgado’s story, it still feels sort of abrupt. 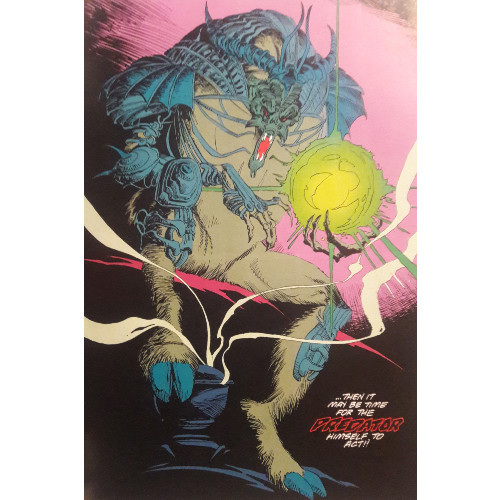 Better handled is Mantlo’s other revelation, that the darkness within Cloak’s cape houses a demonic entity that feeds off the light Cloak craves. Mantlo had questioned the nature of Cloak’s abilities previously, so though it sorts of smacks of the same abruptness as the Father Delgado arc in this graphic novel, this second reveal has some tethers to previous continuity. It also helps that the demon takes a prominent position as this story’s antagonist, utilizing an undead Jack the Ripper against our two heroes.

Additionally, the demon aspect also propels Cloak’s characterization in a nice fashion--injured by the holy water Delgado splashes on him, Cloak is convinced he must be a demon himself, as Delgado had accused him of several times in previous series. Mantlo sews a nice internal war for our caped protagonist as he wanders the streets, questioning his own humanity and sanity. Cloak, so driven by his war on crime and injustice, suddenly finds himself struggling to understand his own intentions. Can he trust his morality, once his strongest compass? Can he continue loving Dagger? Can he properly separate evil from good? Thus, a character who I've often criticized as being wooden comes across as more human than he has in prior depictions. 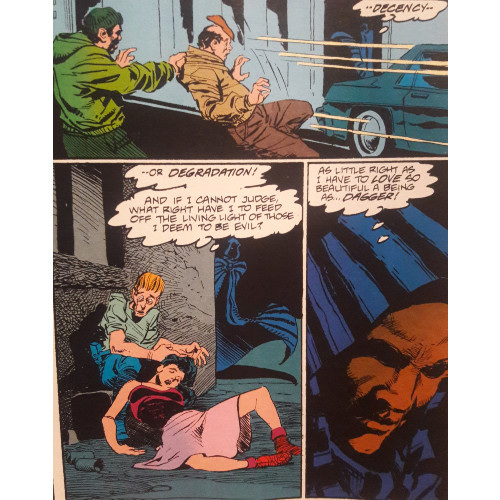 Woven into this struggle is a plot that’s decidedly weaker than some of Mantlo’s characterization. “Resurrected” by the demon, the murderous Jack the Ripper (yeah, the same guy from history) prowls the moon-lit alleys of New York, eerily and magically transforming them into 19th century streets. People themselves are transformed: a few cops become British “bobbies.” The effect, though an interesting one artistically, doesn’t add as much to the story as it could. It looks really neat, absolutely, and Larry Stroman crafts wonderful backgrounds and character designs. But by magically changing the environment, the Ripper doesn’t affect the story in any significant way.

Through all this, Dagger plunges into the fray, and for the first time, Mantlo misses a beat when unwinding her character. As the Ripper silently murders victims to set up Cloak for a fall, Dagger becomes convinced by the ruse; Jack’s machinations so influence Dagger, in fact, that she becomes certain she’ll have to kill her best friend in order to save lives. The intent, I believe, is to create tension between the pair, set one against the other and add conflict to the story. Perhaps, in a story so dominated by Cloak’s internal struggle, Mantlo simply wanted Dagger to participate significantly as well. Yet, Dagger’s ardent emotional swing into “I might have to kill him” territory feels way out of left field and so out of character for the young woman. She and Cloak have had their struggles in the past, to be sure, but Dagger typically approaches her friend with a careful, considerate approach. I could see, if Mantlo allowed a disintegration of their bond to occur over time, her love for Cloak eventually becoming hate. But the shift happens much too quickly in this graphic novel and, by story’s end, their relationship is back to where it was before, so why such a bizarre subplot? 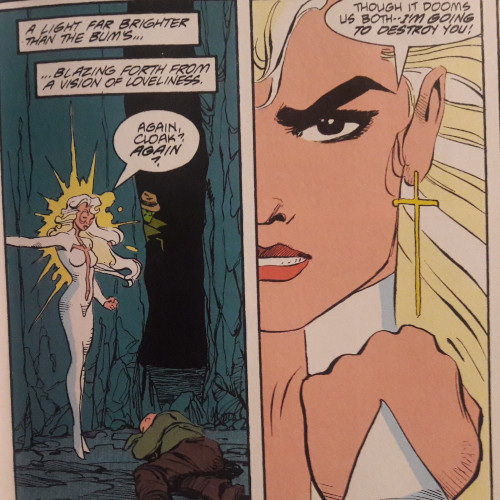 I’ve complained in the past how Mantlo could never seem to get Cloak “correct” as a character; not that the writer necessarily had to get the guy’s all-encompassing personality right every single time, but Mantlo seemed to consistently struggle with finding Cloak’s voice. Sometimes, he was an overbearing father figure to Dagger who spoke in odd dialogue and remained so dang focused on his mission that he became routinely one-note. Here, his flatness is (at least temporarily) eradicated--Mantlo finally finds a voice for his caped protagonist! His inner turmoils become clearer and more impactful to his relationship with Dagger. Our young female hero, however, gets the short stick in response, her character twisting a little to serve story needs. Delgado, too, faces some strange characterization...or, in a sense, very little characterization. His arc, certainly, should have been made stronger and more significant, in my opinion, to justify Mantlo’s ending and treatment of him. Thus, a few cast members become prey to a grim predator...yet it’s not the demon festering within Cloak’s cape which consumes them, but the black ink of a pen which swallows them whole.