Cloak and Dagger's third series proves their most character-driven outing yet, even if missing plot details obscure some of the narrative 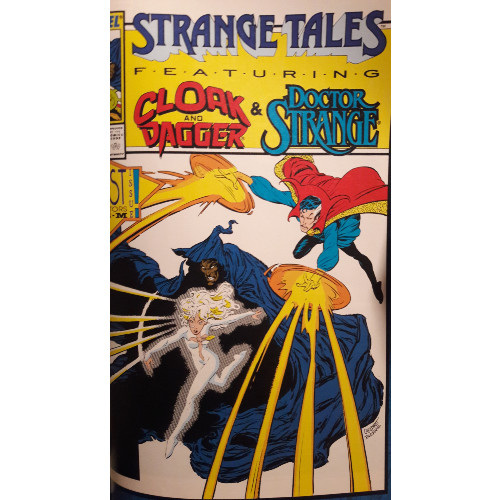 Welcome, friends, to a world of the weird and whimsical.

After their last series was cancelled, our favorite vigilante duo Cloak and Dagger (what? You were expecting “Batman and Robin”?) were given a new lease on life in the anthology title Strange Tales. The series had seen multiple revivals over the decades and was responsible for introducing characters such as Ulysses Bloodstone, Fin Fang Foom, Doctor Strange, and Nick Fury and S.H.I.E.L.D., most famously under the pencil of writer-artist Jim Steranko. Rebooted again in the 80s, this new Strange Tales series was divided between two primary features each issue--a Cloak and Dagger tale, and a Doctor Strange story, 11 pages each.

We’ve already taken several looks into Cloak and Dagger’s history, and this series happens to be our next stop. How does this series--shorter issues, longer numbering--compare to what's already come before? How do stories and subplots continue? And what does it look like when someone other than Bill Mantlo is writing the adventures of our lady of light and her caped companion? 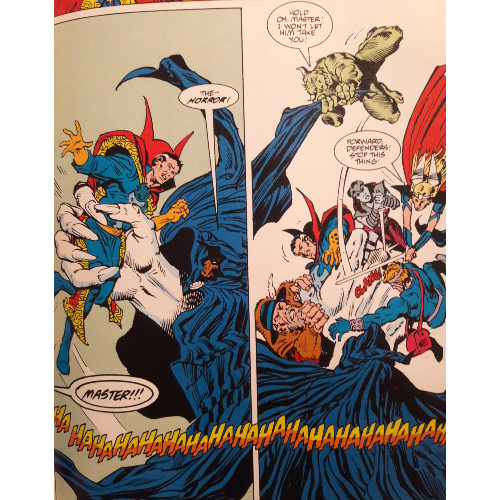 Mantlo picks up almost immediately where the previous series ended, weaving a short tale of homecoming for our intrepid heroes, who just finished up the ridiculous yet amusing quest of stopping the drug trade. Mantlo is with Strange Tales a surprisingly short time before Austin takes over, and his presence isn’t quite as strong as it was in the previous series he crafted for our characters. He introduces readers to Dagger’s real father, a lord of light with powers similar to his daughter. Mantlo’s plot feels a tad coincidental, and the elements he introduces and subplots he weaves in are better handled by Austin. Old Doctor Strange foe Nightmare becomes a principal antagonist for a short time, leading to a Cloak and Dagger/Doctor Strange crossover (with words provided by Peter Gillis for the Doctor Strange half) that utilizes the “split” aspect of the book incredibly well; unfortunately, this is the only crossover in the whole series, a rather sad victim of separated storytelling. I would’ve highly enjoyed more team-ups between the stars of this title, particularly as 18 of the 19 issues feature only Cloak and Dagger’s half.

Austin quickly cements himself as a worthy successor to Mantlo, even supplanting Mantlo as a primary architect in our characters’ lives. Mantlo’s contributions have been great, don’t get me wrong--he created Cloak and Dagger, detailed origins and backstories for his vigilante pair, introduced Brigid O’Reilly/Mayhem and Father Delgado of the Holy Ghost Church, and wrote two whole limited series for our heroes. But Austin, who’s best known for his inking (particularly on Uncanny X-Men for penciler John Byrne), proves his worth with his writing. Austin is wonderfully respectful to Mantlo’s continuity, pulling in Father Delgado and Mayhem for character-accurate appearances, referring to past plots and subplots, and tethering his own narrative to Mantlo’s. He goes so far as to pull in the Punisher, a nice nod to one of the first tales Cloak and Dagger appeared in, and even explains away some of Frank Castle’s behavior in that storyline. 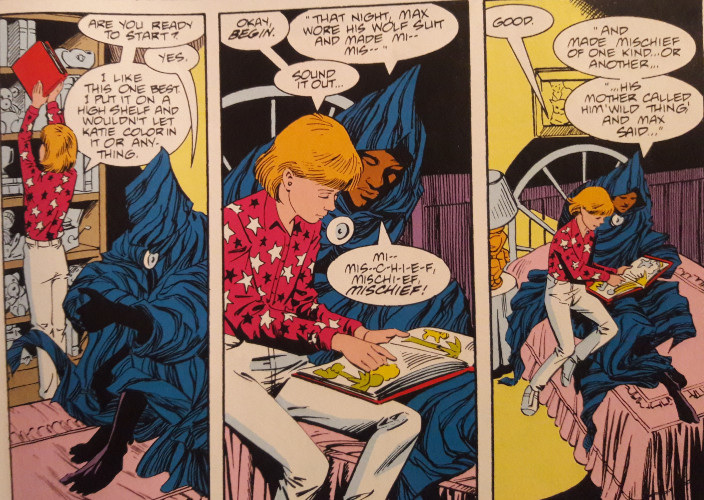 Austin’s stories are refreshing. Largely gone is the hackneyed dialogue Mantlo reveled in, as well as Cloak and Dagger’s obsession with regurgitating their origin stories to everyone they bump into. Also missing, thankfully, are repetitive fight scenes; Austin is much more dramatic with his action, forgoing Mantlo’s standard approach--find drug dealers, bust drug dealers--for more elaborate plotting. Cloak doesn’t just use his cape to suck in evildoers--he rescues Dagger after she falls out of a jet and almost consumes New York with a tidal wave of darkness. Dagger, for her part, largely resorts to hurling her light knives, save for a single, brilliant scene where Austin allows her to tap into her full potential and wield a whole dang sword. It’s kind of awesome.

The characters themselves even feel rejuvenated. Austin pulls in some of the family dynamics Dagger dealt with under Mantlo, elaborating on her relationship with her stepfather and taking college courses and dance lessons. Cloak, largely leaving behind his one-track minded mission against drug dealers, wrestles with his affections for Dagger and, at one point, his waning powers. Cloak is at his most empathetic in this series, a trait Mantlo failed to fully embrace. The haunting, vengeful spectre feels much more human--he deals with feelings of inadequacy, struggles with learning how to read, fights over dark promises he maybe should not have made. Austin gives the character a much-needed, much-missing voice, and Cloak grows as a result. 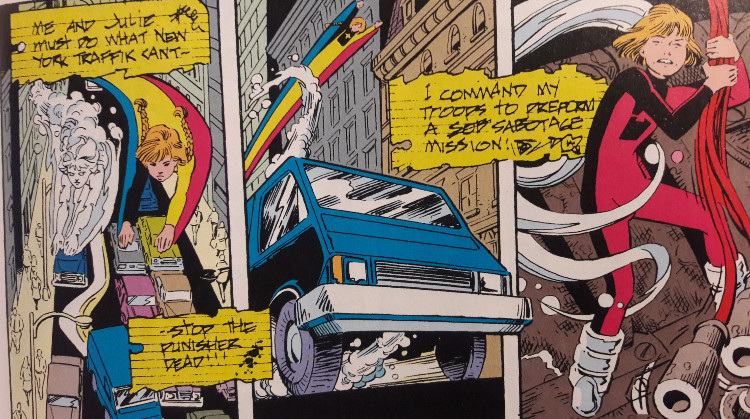 Austin’s take also manages to be much more fun that Mantlo’s ever was as the writer plays around with ideas and takes risks. A somewhat-goofy two-parter features the Punisher and Power Pack, of all people, with Austin’s exposition taking the form of Katie Power’s own “War Journal,” a play off Frank Castle’s narrative style (complete with childlike spelling and phrasing). Mantlo even separates the characters, pairing Cloak with Dazzler and Dagger with the Black Cat (who makes another nice nod to recent continuity by referencing her breakup with Spider-Man), proving that not every single issue of Cloak and Dagger need necessarily always be about Cloak and Dagger. Mantlo’s writing, though not grim, always had a more serious tone to it--his contributions for this series include a story where a giant rat (who is NOT obscure Spidey villain Vermin despite the various similarities--thanks, Brian Michael Bendis) kidnaps children. Austin isn’t Mantlo’s opposite when it comes to content--check out the freaky Mr. Jip if you want some horror-esque elements--but he feels more playful.

Mantlo and Austin both bobble the ball in one area, but it’s hard to fault them. Fans simply reading this series from start to finish may be surprised to learn a few key revelations occur in a Marvel Graphic Novel titled Predator and Prey. For the sake of not revealing too much, I’ll steer clear of spoilers, but I’ll make a few notes: first, fans should be aware that Father Delgado is no longer at the Holy Ghost Church by time Austin takes over. Second, secrets about Cloak’s powers are made known, giving the young man’s abilities a more sinister tone. Austin wields both plot points effectively, but for anyone reading these issues when they were first released, confusion may have reigned. It doesn’t help that Predator and Prey was released over a year after this series started. 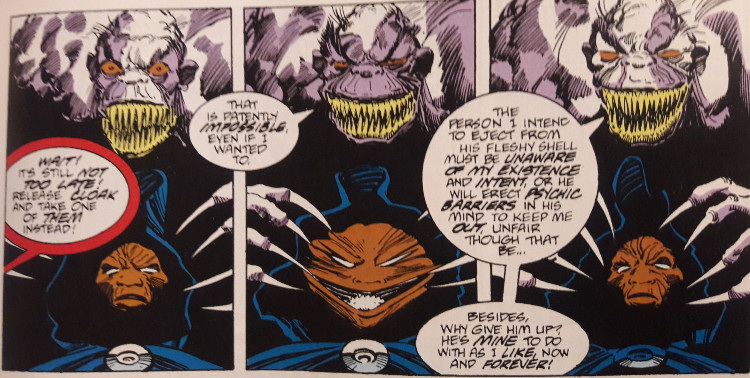 Modern day readers (such as myself) have the possibility of reading these tales collectively, and the volume I own which contains this series includes Predator and Prey; despite the graphic novel's later release date, the volume places Predator and Prey where it makes the most sense narratively. For the purposes of writing, however, I elected to skip over Predator and Prey for the moment. The effect is somewhat jarring, as plot details which Mantlo takes time to reveal in the graphic novel become quickly thrust upon the reader in the Strange Tales series. Delgado is suddenly gone; Cloak’s powers take on a strange new dimension. I started flipping back through preceding issues, convinced I missed a detail or page until an editor’s note altered me to the then-upcoming Predator and Prey graphic novel. For anyone reading the volume cover-to-cover, this is not a problem whatsoever. Still, I wonder what fans of Strange Tales thought when they were consistently promised answers in a graphic novel that seemingly took forever to be released.

Scheduling issues aside, Strange Tales--or, technically, the half of the series I read--proves to be Cloak and Dagger’s strongest showing to date. Bill Mantlo has done an engaging job creating engaging characters, even though his plots and action sequences could feel repetitive. But Terry Austin feels like a worthy successor to the characters and their adventures, crafting some genuinely fun bits of fiction and working in some great characterization for our dynamic duo (still not Batman and Robin). His writing will continue in Cloak and Dagger’s next series, which dovetails nicely with the work he’s already produced.