Chris Claremont continues his stellar run in a near perfect collection of stories, hindered only slightly by small errors 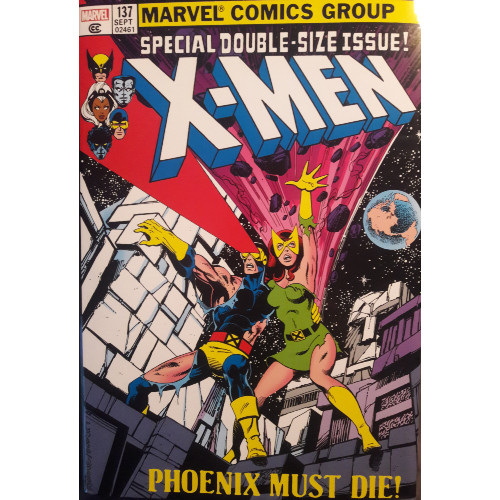 When we last left our merry mutants, Chris Claremont (alongside artists Dave Cockrum and John Byrne) had taken the band of misfits compiled by Len Wein and started molding them into a team. X-Men escapades stretched the breadth of the earth as this new team encountered Magneto for the first time, battled foes in the Savage Land, and went toe-to-toe with Alpha Flight in the northern front of Canada. Along the way, Claremont delved into our characters’ personalities and offered hints of tantalizing backstory, encouraging readers to return month after month to learn more about their favorite heroes.

The second Uncanny X-Men omnibus was released a little over a month-and-a-half ago, giving me ample time to explore and appreciate a new go-around of adventures. Fans who have picked up the first enormous installment will want this second volume to complement Claremont’s first fruits. Heck, even casual fans of the X-Men may want to at least browse the contents of this omnibus or familiarize themselves with the stories therein; two tales in particular will shoot the X-Men into superstardom and shape their history (in comics and on film) for decades to come. Claremont is at the top of his game; working with several fantastic artists, he offers a lot for readers to enjoy in this continuation of his 17-year run. 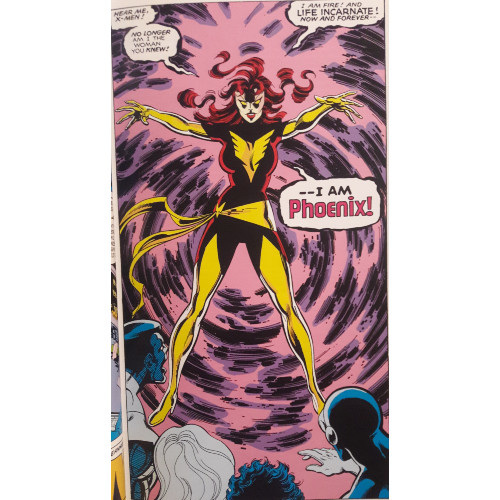 After months of teasing readers, Claremont unleashes perhaps his most famous storyline: "The Dark Phoenix Saga." In the first omnibus, Claremont wove Jean Grey’s storyline deftly, transforming Marvel Girl into Phoenix and showcasing her newfound cosmic prowess. Suddenly, the young woman who once incorrectly referred to her powers as “teleportation” is now a cosmically-charged demigod, outshining her compatriots in terms of raw power. Here, Claremont spends a handful of issues crafting her descent into darkness (through no fault of her own), bringing entire alien races into the resulting catastrophe. Claremont had dabbled with sci-fi aspects previously, but he now launches those to the fore.

None of it feels awkward or difficult to swallow. Most of this is due to Claremont’s wonderful characterization. Jean Grey isn’t some random godling who uses her powers willy-nilly to vaporize ships and planets. She’s a woman, pushed to the edge of stability, with incredible powers she has little ability to control and a dark side she’s unable to suppress. Likewise, Claremont crafts the remaining X-Men as fascinatingly human as they fight for (and sometimes against) the rechristened Dark Phoenix. You feel the weight of responsibility upon the shoulders of Professor X; rage with Cyclops as he once again feels the love of his life slip from his grasp; wonder with Wolverine as he debates the merits of handling the situation; mourn with Storm as she watches a sister descend into tragedy. Jean's struggle permeates the arc--to what extent is she responsible? Is Phoenix just another side of her or something far more sinister? And how does one rightly a situation such as hers, with power as immense and terror so palpable? Questions of morality and decision wind their way through the entire narrative, creating a wonderfully complex story that Claremont handles wonderfully. 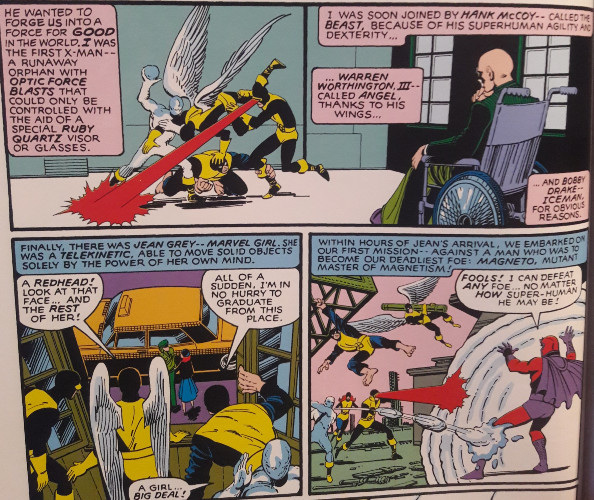 A single hiccup occurs in Claremont’s tale, an epilogue of sorts to the Saga. Most fans will probably be aware of how the Saga ends, but for the uninitiated, I won’t spoil it. Yet Claremont uses this epilogue, which could be an emotionally charged issue, as mere summary. Most of the issue sees Cyclops reflecting how he and other X-Men reached their current predicament, starting at the beginning of the X-Men and working his way to the present. One could argue that readers needed a breather between the Saga and Claremont’s next action-packed yarn, but an issue dedicated to summarizing the X-Men’s entire history up until that point doesn’t seem like the answer. It’s the only point in the entire volume which feels weighed down by needless exposition.

"Days of Future Past" soon rears its ugly, futuristic head, offering an alternate look at a possible grim future. The story is immensely packed for only a two-issue tale, and one believes Claremont and penciler John Byrne highly enjoyed crafting this dystopian world. Designs for older versions of current characters are beautiful as Claremont blends his narrative prowess with Byrne’s art--a married Kitty Pryde and Colossus will warm many a heart; a wheelchair-bound Magneto (now the leader of the X-Men) feels like an appropriate acknowledgement of Xavier’s previous role; even an older Richard Franklin feels oddly proper. Note, if you will, the introduction of a fiery redhead telepath named “Rachel.” She’ll be important in later years. 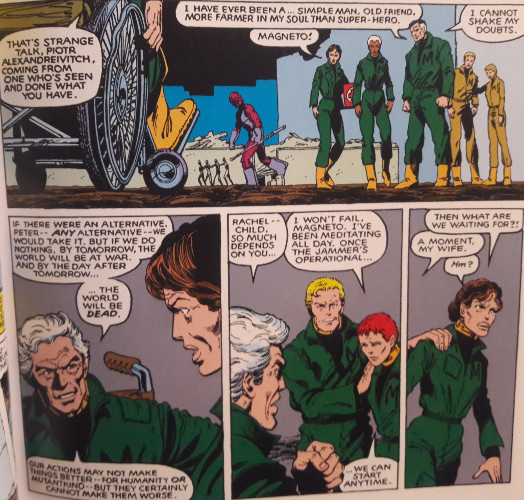 It’s funny to note, then, that Claremont doesn’t seem as focused on story building as he was in the prior volume. "Dark Phoenix" is laid to rest, so stories now seem centered on themselves rather than seeding future tales. Yet Claremont never slouches, always eager to tease a possible idea. Reference is made to the similarities between Nightcrawler and Mystique, a mutant shapeshifter who debuts during "Days of Future Past." The friendship between Wolverine and members of Alpha Flight is shown in flashbacks, digging a little deeper into the enigmatic mutant’s shadowy past. The mutant Caliban is introduced, heralding the sewer-dwelling Morlocks. These hints, fortunately, are subtle, never detracting from the front-and-center narratives.

But Claremont really is enthralled by the here and now, and you can tell the comfort he’s experiencing with both his own continuity and lore established by previous writers. Late in the omnibus, the X-Men journey to an old base run by Magneto that Claremont created earlier, encountering Garokk, a villain the writer invented in a different, past storyline. Prior Claremont concepts collide on the page, a nice nod to his own work and acting as a way to wrap up threads established earlier. Claremont explores a few of Colossus and Kitty Pryde’s family dynamics, brings back the villainess Emma Frost, returns our heroes to Arcade’s Murderworld, has Dazzler appear for an issue (you know you’re doing something right when you can surprise a reader by bringing Dazzler back), and hones in on Kitty as a central character. The Murderworld story, in particular, feels a bit too derivative of a previous story arc by Claremont, not exactly “copy-and-paste,” but smacking too similarly to another tale. Fortunately, this is one of only a few examples where Claremont’s self-referential prowess underwhelms. 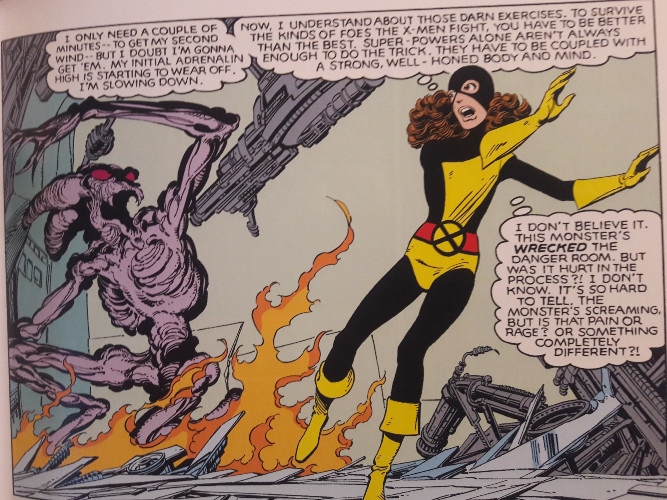 Claremont is at his strongest, interestingly, when he’s working on smaller stories, shorter arcs or standalone issues where he can really pack a punch without worrying about what’s happening next month. A standout issue sees Kitty Pryde encounter a rampaging demon on Christmas Eve; alone in the X-Mansion, Kitty fights valiantly, undergoing a “baptism of fire” that indicates her transformation from mere teenager to X-Man. The story, as others have pointed out, feels much like the movie Alien, with Kitty acting as an Ellen Ripley stand-in. Byrne’s design for the creature hews close to the alien, as does Kitty’s final ploy to destroy the creature. Heck, Kitty even provides some tongue-in-cheek commentary, wishing she had flamethrowers like “they did in that one movie”...regardless of the story’s “rip off” nature, it’s a classic by my standards, a thoroughly engaging issue I’ve enjoyed several times over the years.

The shorter arcs also mean fantastic plot or character developments, such as Kitty’s growth as outlined above (and in other issues). The X-Men battle Dr. Doom in a story that sees him somewhat smitten by Storm; a culminating confrontation with Magneto offers more insight into his character and results in a tepid stalemate between Xavier’s students and the master of magnetism; Nightcrawler receives some much needed character work during an engaging annual infused with Dante’s Inferno imagery; and Cyclops separates from the X-Men for a time, pondering the direction of his own fate. “Moments” lie at the heart of several issues, allowing Claremont to work in fantastic dynamics and enact actual change. Again, you can tell he’s becoming comfortable with this team--Claremont has spent a few years whipping them into shape, defining team dynamics, setting up a status quo. With that foundation laid, he’s constructing upon it, branching out and making his characters memorable. 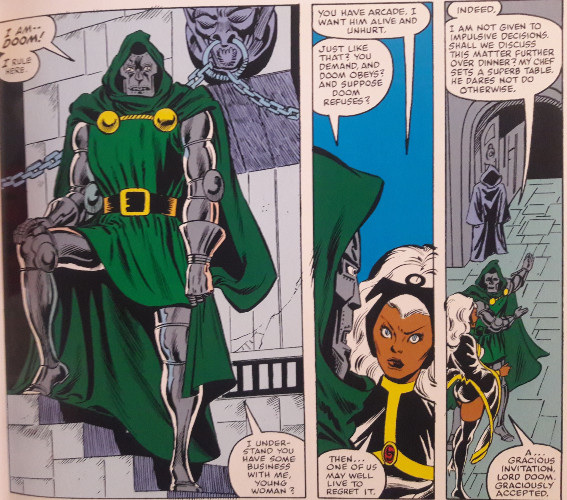 I would be remiss to not give a brief nod to Marvel Fanfare #1-4, which I discussed in a Spider-view blog several months ago. This narrative is somewhat oddly placed in the omnibus, as it makes little reference to prior stories and impacts future ones minutely, if not at all (at least, not in this second volume). Still, as a standalone story, the tale is as fun as it was when I first read and reviewed it, and Claremont’s work with Spidey is praiseworthy.

As the omnibus winds down, the Uncanny X-Men issues give way to a series of “bonus features,” if you will, to pad the final pages. These are a series of smaller stories from a couple different mags, most of which don’t have any bearing on what Claremont has already wrought. They’re kinda fun, I guess? Between Iceman slinging snowballs at a college campus and Nightcrawler journeying with old X-Men foe the Vanisher to a foreign dimension, there’s nothing much to write home about. Stronger stories include a “flashback” adventure Jean Grey shares with her sister, allowing Sara Grey to properly mourn the loss of her sibling, and a short tale focusing on Storm and Black Panther. Interestingly, Claremont makes reference to Storm and Panther’s friendship in an Uncanny X-Men issue included in this volume, a notion perhaps followed up in this short story. That’s perhaps the most impactful concept contained in this bonuses: knowing that Christopher Priest and Reginald Hudlin ran with the Ororo/T’Challa relationship made me keenly interested in seeing that idea seeded by Claremont here. 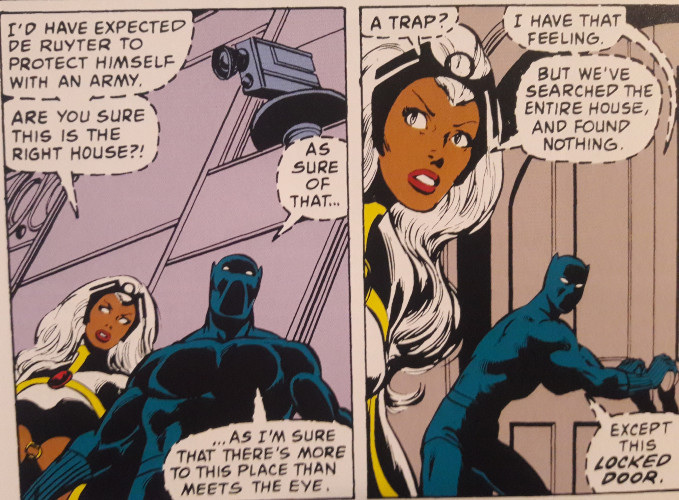 Both omnibuses have been great so far, and I won’t necessarily rank one over the other. Each volume has its intentions--the first volume formed the team and conducted them through their initial adventures; this sophomore volume sees the group coalesce into a true fighting force. Claremont rarely lets readers down, especially when paired with a stable of fantastic artists. I’ve gotten past the point where I read Claremont’s work in high school, meaning I’m eagerly anticipating the third gargantuan installment to see where he takes the X-Men next, man.