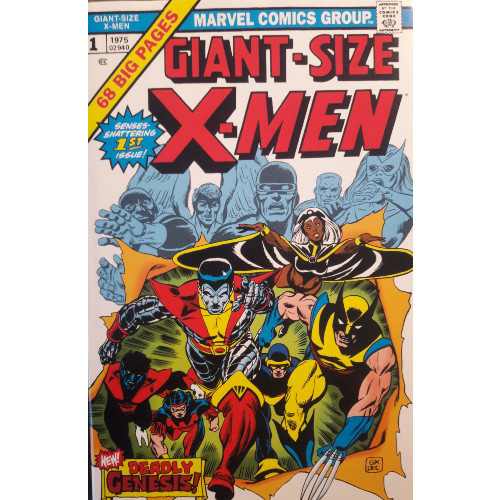 My most recent Spider-view post focused on the final issue of Marvel Team-Up, where Spidey worked with the X-Men to tackle not one, but two beefy Juggernauts. As I've previously stated, the comic book fan in me seriously considered collecting writer Chris Claremont's run on Uncanny X-Men as they became available through omnibuses. Two such omnibuses were re-released in 2020, so naturally, I snatched them up. Having recently kickstarted this second series of blogs, I figured, why not tackle the volumes I've collected so far of Claremont's work? Heck, since dabbling in giddy 80s mutant action, I've picked up a few volumes collecting earlier X-Men tales by other creators. I hope, in the near future, to review those as well. But as I've already referenced Claremont's work, I'm going to set aside chronology for a moment and work through what I've already read.

Created by Stan Lee and Jack Kirby in 1963, the original X-Men were a team of superhuman teenagers who, unlike their other Marvel Universe counterparts, were born with abilities rather than receiving them from radioactive incidents. Feared and hated by humanity for being genetically different, the X-Men faced a host of foes, human and mutant alike, for seven years, until drooping sales caused Marvel to stop producing new content for the series.

X-Men continued in limbo, reproducing old stories until Claremont rejuvenated the series. Building off a foundation laid by writer Len Wein, Claremont worked alongside a whole host of artists and penned the X-Men’s adventures for the next 17 years, turning a second-rate title into a financial juggernaut for Marvel, crafting some of the team’s most important stories, and kicking off additional spinoff series. Fans can look no further than several Fox films--X-Men, X2: X-Men United, X-Men: The Last Stand, Days of Future Past, Dark Phoenix, and New Mutants--or TV series such as X-Men: The Animated Series and Legion to see the lasting impact of Claremont’s work.

Collecting the writer’s first four-and-a-half years on the title, this omnibus represents a cross-sectional analysis of Claremont’s narrative prowess and character work from 1975-1980.

Under the direction of writers like Stan Lee and Roy Thomas and artists like Jack Kirby, Werner Roth, and Neal Adams, the original stint of X-Men comics had focused on the lives of young heroes instructed by Professor Charles Xavier, a man dedicated to training mutants to face a world tragically against them. Five, white, American, predominantly male teenagers fought costumed baddies, fell in love, saved the day, and delivered deeds of daring-do.

Contrasted with the old roster, the new Uncanny X-Men are diverse and complex in their backgrounds and cultures. From the get-go, Wein and Claremont assure readers that their team is one that represents the globe--Storm hails from Africa, Colossus from Russia, Nightcrawler from Germany, Wolverine from Canada, Banshee from Ireland, and Thunderbird from a Native American reservation. Instead of inhabiting cultural stereotypes (for the most part-- the quality of Claremont’s accents has long been debated), these characters serve as a balanced microcosm for the world, their perspectives and histories as unique as their abilities. 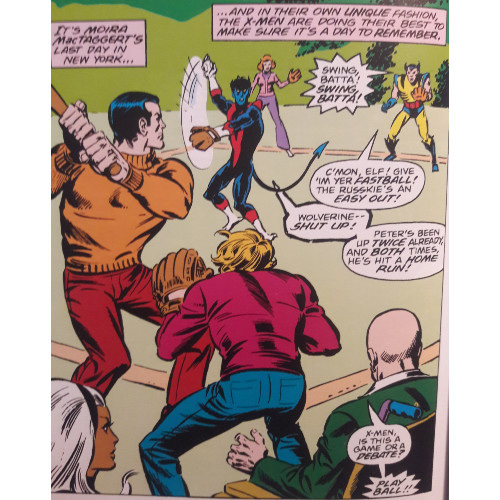 Over four years of stories, readers learn to love and appreciate the complexity of the characters--they’re people first, not heroes. Claremont utilizes a wide range of methods to drill this into readers’ heads. Stories of the X-Men fighting Magento, the Sentinels, the Juggernaut, or Arcade (a tale that also features a very brief cameo by our illustrious Web-Head hisself) are contrasted with scenes of the group enjoying a lakeside picnic, engaging in baseball, eating lunch at a soda shop, or exploring downtown New York during the Christmas season. Frantic action combines with relaxed pleasure to create uniquely human stories. Elsewhere, Claremont (often subtly) weaves in past histories for his characters and threads in new details--Storm was a pickpocket before becoming an African “goddess”; Colossus lost a cosmonaut brother; Cyclops deals with the weight of leadership--to make his X-Men three dimensional. Certain characters, particularly Storm, Nightcrawler, and Wolverine, gain new dimensions to their abilities, reveal hitherto unknown facts about their talents, or learn how to better control their powers. Growth permeates this volume as each hero learns more about themselves and each other.

Simultaneously, Claremont ensures us his characters are flawed, as heroes butt heads verbally, get into scrapes, withhold facts and feelings, and wrestle with doubts and broken hearts. These new X-Men are just that--brand new. Wolverine had debuted in The Incredible Hulk, and the Banshee was a former X-Men villain, but the others are all green. No one's seen action, no one understands the dangers. Characters like Colossus, Storm, and Nightcrawler not only learn about themselves but the team dynamic they've entered. Veteran X-Man Cyclops steps up as the leader Xavier had been training him to be for years; fascinatingly, "Cyke," as he's called, works well under Claremont as his own person rather than just as a leader. A powerful scene early in the volume sees a downcast Cyclops awaiting grim news after an incident involving love interest Jean Grey--Will she be okay? is the heavy question weighing on his mind. Claremont skillfully handles Scott’s emotions, moving the young man from terror to joy as the news comes back positive. This brief rollercoaster serves as a prime example as to how well Claremont handles his characters, running them through the gamut of emotional ranges. 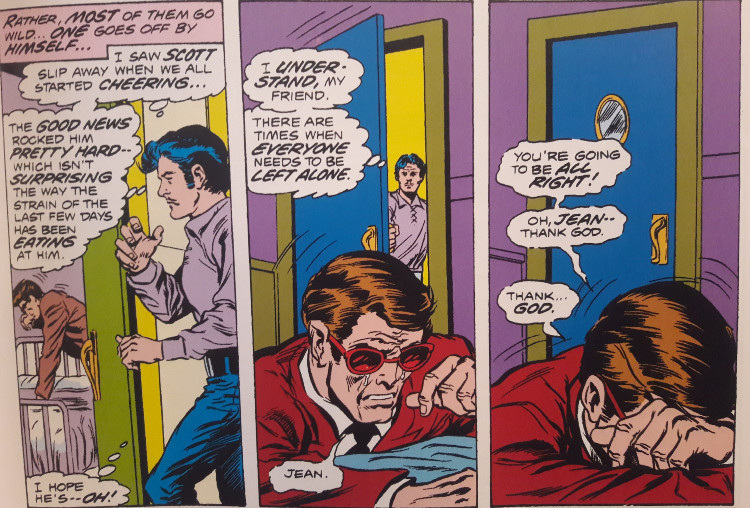 When the stories call for action, Claremont is never hesitant to whip up a frenzied yarn to test his heroes’ mettel (or, in the case of Colossus and Wolverine, their "metal"). Old foes and new rear their ugly heads, calling for this group of superhumans to forge ahead against a gauntlet of terrors and traps. Several issues span a globe-trotting saga that sees our heroes engage with dastardly villains in Scotland, Japan, Canada, Ireland, a mysterious land beneath the Antarctic, and even the dark depths of space. Dave Cockrum and John Byrne's (who replaces Cockrum with issue #108) pencils only add to the allure, for without their gorgeous depictions of landscapes foreign and familiar, we’d be left with only words; without their masterful renditions of sci-fi space battles and raucous brawls, we’d be forced to imagine the world they lovingly construct for our eyes.

I would like to take a moment to hone in on the “globe-trotting” escapades for a second. Claremont and Byrne treat this yarn as one massive story, delivering chapter after chapter of unique tales as our characters face new foes and interact with new locations. The narrative though not as grand as some of Claremont’s later tales, still feels appropriately large in scale, encompassing a good part of the Earth as the X-Men hop from one locale to the next. Wonderfully, these chapters never feel rushed or randomly thrown in for the heck of it--the adventure in the Antarctic flows naturally into the Japan section of the narrative, which in turn nicely gives way to the Canadian portion. Each chapter feels like it builds upon the last, offering a nice coherency to the whole. 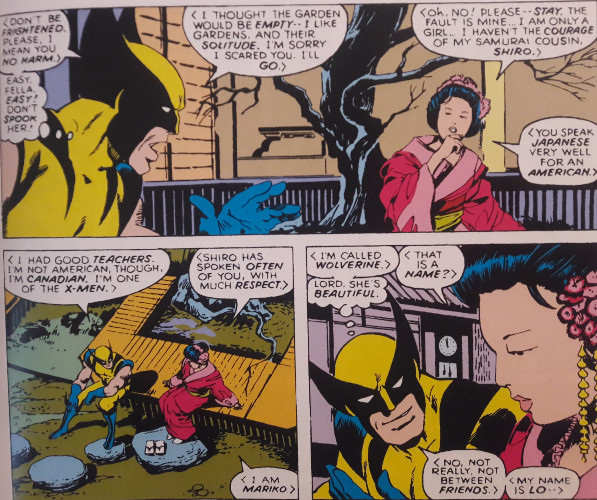 As our heroes face one primary threat or another, Claremont never forgets to include subplots galore, hints at stories to come. A cell door in a research center teases the mysterious “Mutant X”; Canadian superhero Vindicator hunts down the adamantium-infused Wolverine on more than one occasion; and woven methodically through several tales, Jean Grey receives a massive power surge that makes her one of the most powerful, if not dangerous, mutants alive. Her tale is not quite finished by volume’s end, but Claremont sews the seeds for darker, emotional tales ahead, teasing readers along with the promise of something epic.

Even at this early stage, it’s easy to see why Claremont’s stories were lauded. Included in the omnibus are several letter columns originally tacked on the end of each issue. Fans from all over the world gush praise, their missives overflowing with love for the characters and the stories. The good majority of these comments remain as true today as they did over forty years ago, proving the timelessness of Claremont’s creations. 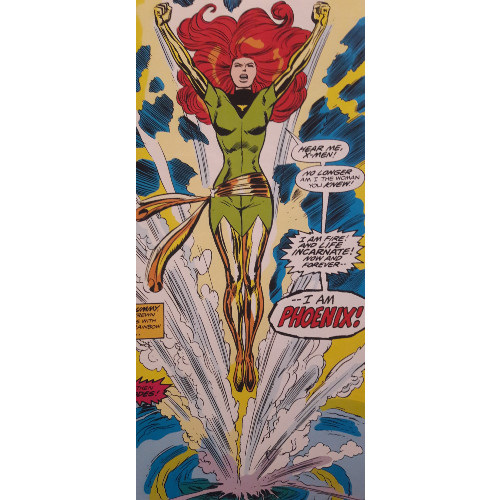 The same can be said about the intermittent detraction tossed in the bunch. Occasionally, fans find fault with weaker narratives and imperfect outings. The odd, awkward, or somewhat dull issue creeps up now and again in the omnibus, and at least one issue feels relatively out of place, a flashback story by Claremont and Mantlo that halts the forward momentum of the narrative in progress. These tales, though they don’t detract from the omnibus’ quality as a whole, don’t register as powerfully as some of the other chapters. Whether it’s because the story feels cliche, progress feels stymied, or the writing is off, these issues point out how writers and artists can be as imperfect as the characters they give life.

These first four-and-a-half years sees Claremont and Co. establishing a foundation and building off of that groundwork--some stories have definitive beginnings and endings, while others tease future narratives in the years to come. Even the little character moments hint at unfulfilled or as-of-yet-untold backgrounds that I hope Claremont fleshed out down the line. There are good reasons why this run is considered not only the best in X-Men history but one of the comic runs overall. Characters pop, the art dazzles, the stories engage, and the hints promise greatness to come. Claremont set himself a high bar within the first few years, and if I know my X-Men history, he’ll clear that in the next several tales. Things will be heating up (literally) in the next volume.