Despite a few narrative bobbles, Bill Mantlo crafts a strong overarching story in this second Cloak and Dagger series 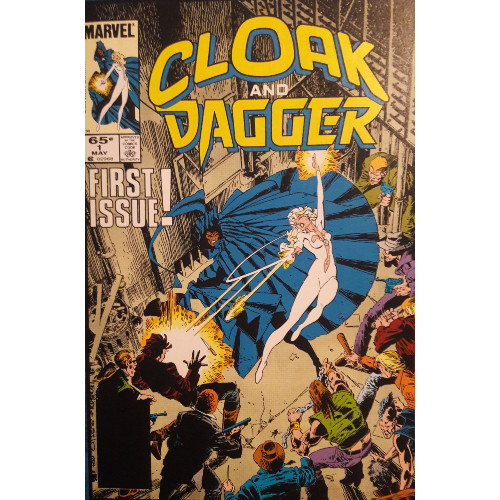 After a short hiatus, our duo of darkness and light burst onto the pages of their own series yet again. If you’ll remember, back before we started down the nutty path of the “Alien Costume Saga,” we explored a four-issue Cloak and Dagger limited series by creator/writer Bill Mantlo and artist Rick Leonardi. That series fleshed out Mantlo's characters, providing them with backstories and a small cast of recurring characters for them to interact with. Since then, Cloak and Dagger have popped up a handful of times--a Marvel-Team Up Annual, a few “Alien Costume Saga” story arcs, a New Mutants story, and a Marvel Fanfare issue.

Elements from those appearances will be important to recall as we head into this longer miniseries, but keep in mind that this second volume of the vigilante pair’s adventures really stems from their first limited outing. Mantlo and Leonardi’s prior work together will be helpful as we descend into the depths of this second series. 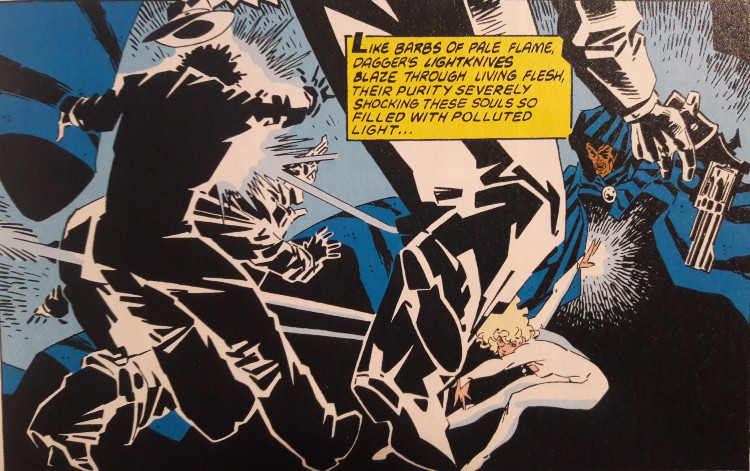 One common complaint I made when reading Cloak and Dagger’s adventures for the first time was how repetitive they felt--the two would hunt down some drug-dealers, suck them up into Cloak’s cape or nail them with Dagger’s light knives, and leave them shivering on the ground. Rinse, repeat. Fight scenes blended together as their seemingly one-note abilities manifested themselves in mundane ways. Any time the characters stumbled upon a criminal, you’d know the outcome even before the battle commenced.

My second readthrough of this series elicited a similar feeling when I focused on the problem, but I found that I paid less attention to how the pair fought criminals and gave more focus to why. Cloak and Dagger’s mission has nicely evolved in the few years they’ve been around by this point, transforming from a simple mission of vengeance to a dutiful calling. They wish to keep drugs off the streets and out of the hands of young children and teens, which I certainly find commendable.

Complex as this issue is, Mantlo falters when it comes to filtering the concept through his characters. He makes sure you understand their intentions from the get-go, as he never lets up with his rhetoric. Cloak in particular is his mouthpiece for much of the series, the dark-caped teen never letting up about the importance of their mission. I’ve commented before about how little characterization Cloak receives in prior stories, which is a problem that continues here. The young man is driven to the point of obsession, merely repeating their intentions and purposes ad nauseum. He doesn’t often struggle with his convictions, nor is he ever convinced that his way of thinking is wrong. His greatest fear is losing Dagger, and though this is a nice tether to Claremont’s work in New Mutants, it doesn’t carry the same weight. Claremont perceived the relationship between the characters as romantic, and though Cloak occasionally references his love for Dagger in this series, Mantlo doesn’t carry the theme through. Late in the series, Cloak momentarily wrestles with jealousy when another young man fancies Dagger, but again, it’s not handled as thoroughly as it could be.

Cloak’s character actually feels like a step back from what Mantlo has done before. In their original limited series, the vigilantes detailed their origins to Father Delgado and Detective O’Reilly in an engaging manner that delved into their backstories. Dagger’s origins are touched on by Mantlo throughout this second series--she confronts her mother early on and interacts with her step-father, her balletic background is referenced a few times, and her desire to be a normal kid is a cornerstone of her character. You’d hope Cloak would receive similar treatment. Regrettably, Mantlo fails to get into the mind and personality of this character. A Secret Wars II tie-in issue sees the Beyonder temporarily remove Cloak’s powers, allowing for Tyrone Johnson to express himself for a single scene. Otherwise, Cloak is the same enshrouded youth he’s always been. No reference is made to his family, his natural athleticism, his stutter, or any other aspect of his past. We simply follow along with his one-track mindset and endure his one-trick pony powers. In other words, Cloak feels wasted.

Fortunately, the story itself takes fewer lumps. Earlier issues deal with matters related to Dagger’s family and the aforementioned SW II tie-in--these are handled fairly decently by Mantlo, especially the tie-in. That issue may be the benchmark by which I compare other Mantlo-penned Cloak and Dagger stories. Well-written, engaging, and character-driven, that single issue reveals how well Mantlo knows--or, in certain cases, should know--his characters. Heck, the series’ first issue should not be ignored either: a fantastically executed opening scene, highlighted by Leonardi’s pencils, sees the duo clobber human traffickers. The action is sharp, the build-up intense...these two examples showcase Mantlo’s talent and the promise the series possesses.

Cloak and Dagger duel with devilish drug dealers aplenty, but Mantlo eventually pulls them away from the towering heights of New York into other countries. The shift is a breath of fresh for anyone following their adventures. The two embark on a cross-continent adventure, following a particular group of drug dealers back to the source of their supply. Mantlo’s message may be a tad preachy at moments--essentially, “drugs are bad, kids, and don’t you forget it!”--but the pace at which he delivers the action is frenetic. Cloak and Dagger get swept up into an international conspiracy, buoyed by their quest to rid the world of drugs. Mantlo, wonderfully, depicts them as wide-eyed youths, full of vigor, ready to tackle the world and all its problems. He works them through their obliviousness--more so Dagger than Cloak--and takes what may seem like an insane premise (“ending the drug trade”) and turns it into an insightful perspective on world issues.

Philosophical maneuvering aside, the adventure itself is quite entertaining at face value, giving Mantlo the ability to steer away from cookie cutter plots. Cloak and Dagger soon become embroiled with a youthful stowaway, Bill Clayton, who adds a dose of “Regular Joe” humanity to balance out Cloak’s melodrama. Together, the trio romp through Germany and the Middle East, even going toe-to-toe against the premier Marvel granddaddy of superbaddies Doctor Doom. Divorced from much of the surrounding Marvel Universe--save for the Beyonder issue and a “guest appearance” by Spidey--the series remains uniquely situated in its own bubble, but the Doom arc is a nice touch. I enjoyed seeing the FF’s greatest foe pop up to menace our heroes, and even though his appearance is brief, Mantlo churns out a heckuva issue for the metal man.

In the background, smaller arcs focused on Detective O’Reilly and Father Delgado flit around. Honestly, I wish Mantlo had spent a bit more time on these characters, especially in the later issues, where they seem to vanish. O’Reilly undergoes a stunning transformation that leaves her more hero than cop, and though Mantlo inserts some nice change on her behalf, it’s largely relegated to the series’ first half. Similarly, Father Delgado is becoming quite the complicated character, and though I don’t fully agree or like the direction Mantlo is taking him, his own personal journey will be explored in further arcs. The small spatters of characterization are engaging when they happen, and I know this series is called “Cloak and Dagger,” but to have such integral supporting cast members vanish part way through like Thanos Snap!-ed them out of existence feels like a slightly lost opportunity. Again, Mantlo makes up for this in later adventures, but I still wish he had continued peeling back the curtain as the series progressed, allowing us additional insight into O’Reilly and Delgado’s shifting personalities. All it means is we’ll have to wait for those future revelations. 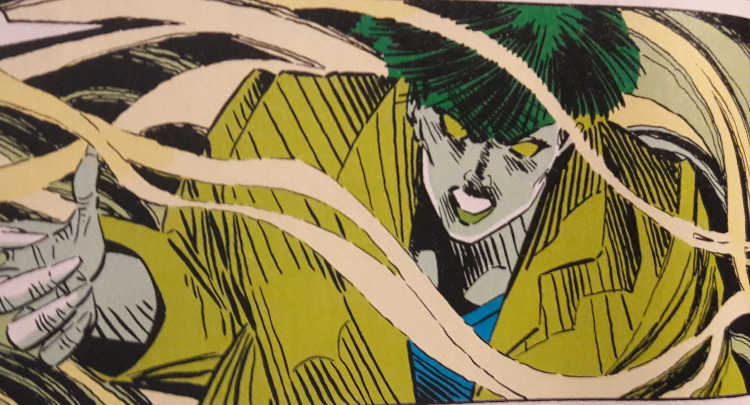 Mantlo’s handling of the story is key to why the series works--he doles out some of the blander, paint-by-numbers action sequences, but he also mixes the action and adventure up, whisking us away to new locales and giving his characters the opportunity to experience a world outside New York. Framed by a seemingly bonkers quest, Mantlo uses the “end drug trade” premise thoughtfully and engagingly, shining a light on grimmer corners of the world and giving his characters engaging motivation. Occasionally, you’ll discover that his characterization isn’t as strong: Dagger comes across as a genuinely engaging protagonist, founded on a strong backstory and likeable qualities; conversely, Cloak still feels shallow and a little hollow, a sad holdover from prior appearances. Similarly, a few background cast members are fleshed out a little, but character work could have shown through more strongly. Cloak and Dagger are engaging, far more than I remember, but there’s still room for growth. I don’t quite recall the direction many of these characters take in future series--Strange Tales and The Mutant Misadventures of Cloak and Dagger--but I’m interested in seeing how Mantlo and other creators handle these two as their story continues unfurling like the ebony threads of Cloak’s cape.