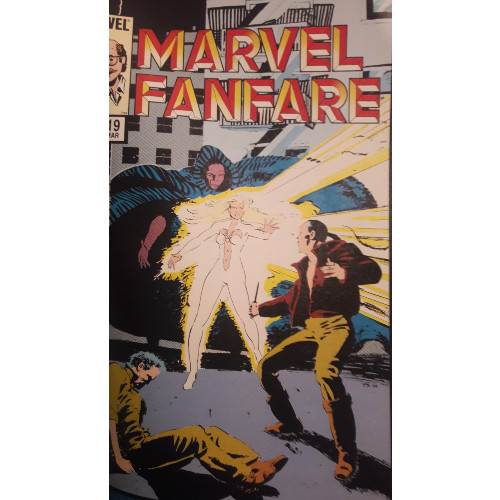 Cloak and Dagger would receive their own issue in the Marvel Fanfare series, a title which, if you may remember from our dives into Spidey-centric stories, started out as a showcase for top writers and artists to tell stellar stories to offset the increased cost of the mag. I’ve only examined a handful of issues, and while I can say the [first four issues}(https://keenlinks.com/blog/spider-view-marvel-fanfare-1-4) fit the bill, courtesy of a multi-chapter story arc from famed Uncanny X-Men scribe Chris Claremont, the series’ original concept seems to have lost a little bit of steam by time we reach this, its 19th issue. Sure, we’ve got Bill Mantlo on writing duties and the ever-wonderful Rick Leonardi providing pencils for a third of our tale, but does that mean this issue lives up to Fanfare’s prime directive?

Why don’t we let Mantlo, Leonardi, and the others answer that question for us? 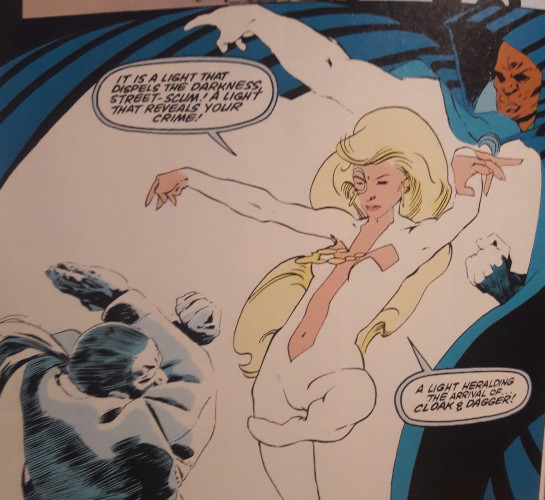 I’ve mentioned in earlier posts about Cloak and Dagger how their whole “fighting drug dealers” shtick would eventually become repetitive and dull. Undoubtedly, Mantlo’s intent was to have a pair of street level heroes specifically looking to wipe out a grim evil that targets children and, as Cloak and Dagger specify, runaway teenagers similar to themselves prior to receiving their abilities. But when you integrate the equation “Drug deal in shady alleyway + the coincidental timing of our avenging vigilantes = drug dealers crying for mommy” in most of your stories, offering little in the way of distinction between drug busts, the whole thing begins to get a little hazy. Separate incidents which should stand on their own become blended together, and I start to forget which drug bust happened in which issue.

This is, of course, not much different than the action you’d find in your standard Spider-Man comic, for example. Oftentimes, our classy Web-Head is out for a night, swinging along, when he’s suddenly made aware of a bank robbery or mugging or supervillain scheme. The scene has gone down hundreds, if not thousands, of times; heck, the 60s cartoon theme song even references it (“In the chill of the night/At the scene of a crime/Like a streak of light/He arrives just in time”)! Surprisingly, I never get bored with the oft-repeated foiled mugging, nor does the image of Spidey thwipping his way into conflict with the Rhino or Shocker ever dull me. 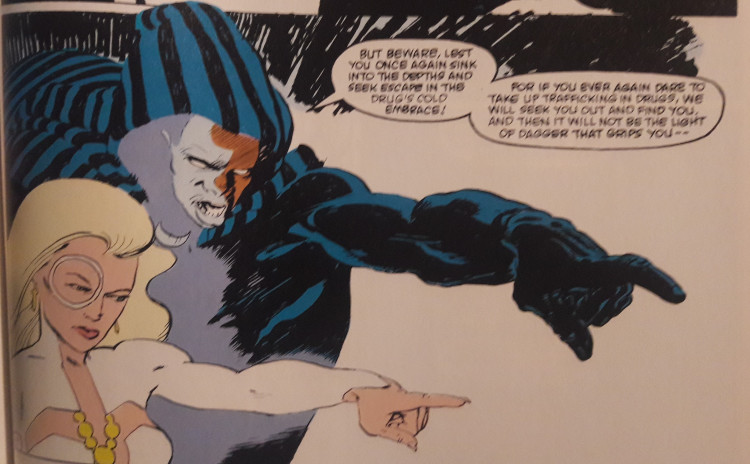 So why do I complain about this with Cloak and Dagger? I think the answer is two-fold: first, in the case of Spider-Man, the “arrives just in time” scene has played out in so many different stories over the last five (closer to six) decades--and not just in comics, but also in film, animated television, and digital gaming--that it’s exceeded the bounds of being cliche and become something else. “Classic,” I would argue, perhaps even “foundational” to the character. It’s an expectation, becoming so ingratiated into Spidey and his line of work that the image has become his modus operandi, in a sense. Dr. Strange defends Earth from demons and dark magicians; the Fantastic Four explore untold universes; the X-Men fight for the rights of homo superior in a world that despises them. And Spidey? When he isn’t getting sucked into cosmic conflicts or fighting global threats alongside the Avengers, you can reliably find him amongst the stone giants of Manhattan, foiling some evildoer or another.

The same may be true for Cloak and Dagger, but I would argue that, at this stage in their history, their efforts at stopping drug pushers has not developed into a “classic” attribute of their character. Mantlo has already pitted them against several criminals in back alleys, so for this story to open with a similar scene, I shrugged my shoulders with apathy instead of smiling with joy. The same effect I feel when Spidey drops in on a wayward crook is not replicated with Cloak and Dagger.

The second part to my answer is that Mantlo fails to introduce any uniqueness to these scenes. Spidey writers and artists have always managed to portray his crime-busting as entertaining and somewhat quirky--he cracks jokes, bounces around the room in a lively manner, and engages his foes through a variety of methods including fisticuffs, webbing, pure strength, and agility. Cloak and Dagger fail to do the same. They come across a crook, yell at him that his time of dealing death is over, and proceed to either trap him in Cloak’s cape or bullseye him with one of Dagger’s light knives. Rinse and repeat.

When Cloak and Dagger aren’t fighting crooks in this issue, the tale does take a more unique turn. Dagger--who, in a few previous stories, has already expressed interest in living like a normal teenager--momentarily leaves Cloak to explore New York. These scenes are vital to fleshing out her character; although Mantlo has already hinted at Dagger’s wish, this is the first time she gets to experience life as a normal young woman...instead of, y’know, a superpowered teenager crusading against sleazy criminal types in darkened alleyways. She goes to a club and gets to dance, which is a nice nod to her balletic roots. The dancing scene specifically, illustrated well by Leonardi, is a great example of her character. Mantlo doesn’t need to remind us that Dagger loves dancing or uses her balletic prowess to express herself; he and Leonardi simply show her moving to the music.

Eventually, she involuntarily lands herself in a bit of trouble, winding up kidnapped by a two-bit thug hoping to score big by bringing a vigilante to a local mobster. These scenes play out somewhat awkwardly, as you may remember that Dagger has already been kidnapped once and, that time, by another superhuman individual, the Answer. In this issue, a mere grunt takes her captive; in order to do so, Mantlo laces the preceding panels with some coincidental circumstances that, normally, would not occur unless the situation called for Dagger to be taken unawares. From here, the story plays out as you would expect--Cloak comes to her rescue, and the criminals involved face their comeuppance.

What Mantlo does well in the concluding pages is juxtapose Dagger’s “hunger” with Cloak’s: much like Cloak’s inward darkness gnaws at him and makes him crave the light of other people, be it Dagger’s knives or the “living light” of criminals, Dagger feels the pangs of normalcy; much like Cloak’s life was upended by the shadows lurking within him, so are Dagger’s chances of being a perfectly normal teenage girl vastly hindered by her own abilities. Momentarily, Mantlo has Cloak pull away from the calling that he has led Dagger into and allows the young man to see his friend through a more human perspective. 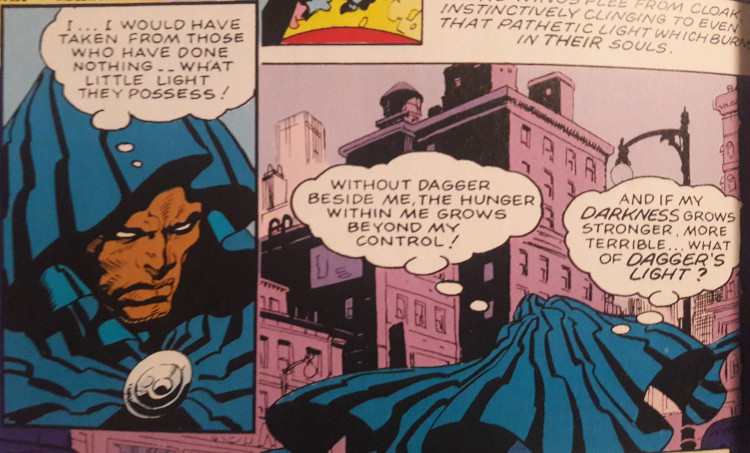 Until this tale, I’ve balked at Cloak’s characterization, criticizing Mantlo’s inability to steer him away from being an individual with a one-track mind regarding his mission. Important as Cloak’s crusade against drug dealers is for both him and Dagger, and as much of a purpose as it gives them, Cloak often comes across as subsumed by their mission. This issue is, ostensibly, a story about Dagger; yet hiding behind a thin veil is Cloak, waiting to be revealed at the tale’s end. Part of me could criticize Mantlo for waiting until the issue’s final panels to fully bring Cloak into the mix and offer us this breakthrough interpretation of the young man’s character. But I found I genuinely enjoyed Mantlo’s portrayal of Cloak, especially a newfound treatment of Dagger, in these last moments; I believe that, if this transformation had been introduced earlier, it would have robbed the ending of its poignancy.

From the first, I found myself intrigued by this issue’s title, “Such Sweet Sorrow.” I assumed it pointed to the plight of drug dealers and users--the “sweetness” or allure of the drug itself or the sale of such narcotics, made “sorrow” by either the bitter effects of injected poison or Cloak and Dagger’s vigilante activities. After finishing the issue, I’m starting to wonder if the title is also indicative of our young pair’s plight. Cloak and Dagger have found a certain “sweetness,” or companionship, in one another, but this has come at the “sorrowful” cost of their humanity...or most of it. If the title’s dual meaning is intentional, I think Mantlo deserves applause for masterfully threading this particular dichotomy through this Marvel Fanfare issue.