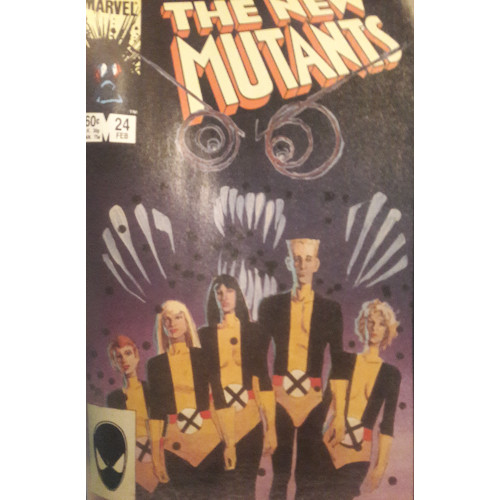 Appropriately, this next post comes on the heels of Marvel Team-Up #149, where Spidey teamed up with the New Mutant known as Cannonball. Somewhat surprisingly, Spidey has nothing to do with our next three-issue story arc, as we’re shifting gears from Spidey-related titles to the New Mutant series itself. I struggled with whether or not I should include this story arc for a few different reasons; one reason was that I felt it may stray too far from the purposes of this blog to warrant interest.

After reading this New Mutant storyline, however, I’ve decided to discuss this story at length. Though Spidey doesn't appear, the team of Cloak and Dagger play a pivotal role in the story and, primarily because of their inclusion and because this tale is tethered to a previous post from a few months ago, I changed my mind.

Writer Chris Claremont picks up pieces embedded by Bill Mantlo in a story that didn’t need to be told but certainly enhances the mythos of Cloak and Dagger by existing. 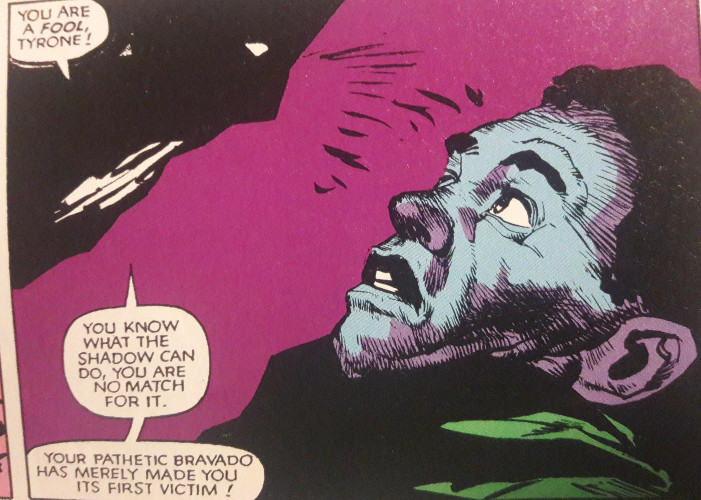 When I first read this story about a year ago, I was not invested whatsoever. I can’t even tell you why, especially considering Claremont (who, as I’ve noted, is certainly one of my favorite “classic” writers in the biz) scripted this three-parter. Whatever my reason for disliking the tale, I felt hesitant approaching this story again, wondering if I should skip over it completely, as my faulty memory saw no real reason as to why I should include it in my “series” of Cloak and Dagger stories.

All I can say is I’m very happy Claremont proved my faulty memory wrong. Claremont plants this tale firmly as a sequel to Bill Mantlo’s story from Marvel Team Up Annual #6. For those who may not recall, Mantlo’s annual saw two members of the New Mutants--the lupine Wolfsbane and the solar-charged Sunspot--kidnapped and experimented on by members of the same drug cartel that accidentally gave Cloak and Dagger their abilities. Wolfsbane and Sunspot’s own mutations were enhanced for a time before the vigilante pair rescued them. It’s in the wake of this narrative that Claremont’s begins.

Claremont deftly weaves a double-pronged mystery for us to follow--Sunspot and Wolfsbane have been acting weirdly, their powers growing out of control or manifesting in different ways. Simultaneously, Cloak and Dagger’s own abilities have seemingly vanished, or were perhaps stolen. Though it doesn’t a genius to put two-and-two together, nor does it take long for Claremont to connect the dots, the reader is not treated like an idiot when presented with the mystery. Claremont works through it progressively, dropping hints and using the first chapter to methodically work through the cause-and-effect nature of the story. Granted, it's easier to understand if you've already read Mantlo's annual, but even if you haven't, Claremont at least doesn't make you feel like you should have.

As I mentioned above, this isn’t a story that needed to be told. It introduces some interesting developments, as I will touch on, but it isn’t earthshaking. I can’t tell you if Claremont built up this story in prior New Mutants issues, but I can tell you that Cloak and Dagger’s loss of power is sudden. Bill Mantlo, in previous stories, has not made any reference to an event like this, nor did he leave MTUA #6 on any sort of cliffhanger or promise of a sequel, so part of me wishes to believe that Claremont conceived of this tale for these three, specific issues. This story isn’t necessarily meant to showcase pivotal moments in the lives of either the New Mutants or Cloak and Dagger, and yet, Claremont saw potential in the concept and ran with it. 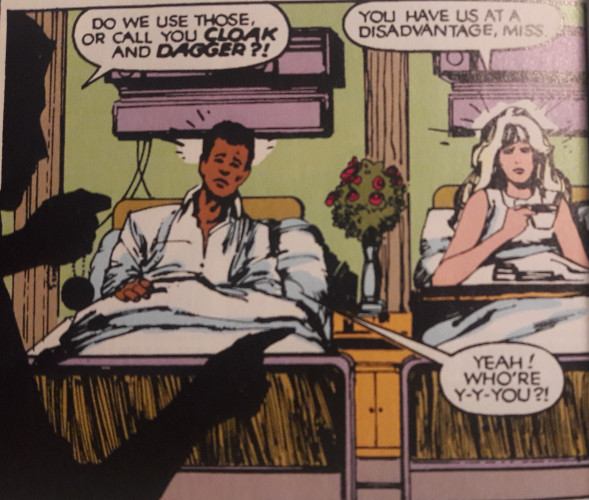 I tend to really enjoy when writers manage to pull in pieces of lore and insert them dramatically into their stories. At moments, those pieces can be entered rather awkwardly, but Claremont doesn’t do that here. I feel like he looked at Mantlo’s story, went “Yeah, I could use that,” and decided to graft his own tale onto the end of the previous MTU annual. It makes sense to bring these characters back together, as they’ve already interacted, and by having Sunspot and Wolfsbane continue to react negatively to their experience from MTUA #6, you get a very organic story that flows from the ending of a different narrative. The pieces click nicely together.

In terms of characters, Claremont utilizes his stable of New Mutants as effectively as he does his roster of X-Men. From just these issues, I was able to understand that characters like Cannonball and Mirage are the de facto leaders of the New Mutants, that Mirage and Wolfsbane have a very sisterly relationship, that Magik (sister of X-Men Colossus) possesses quite a bit of trauma after years spent as a slave to a demon lord...various characteristics, which I assume were also woven in other New Mutants issues, help make the teenage heroes stand out. The X-Men characters which appear here, specifically Colossus, Professor X, and Rogue, don’t receive as much attention, which makes sense. This is a New Mutants tale, not an X-Men one, and with the trilogy already dividing time between the young team and Cloak and Dagger, there’s not much room for the other adult characters. 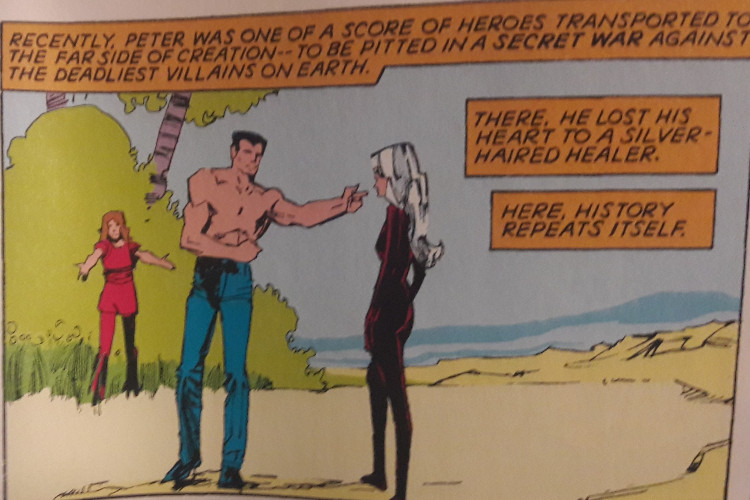 One standout moment exists for Colossus, however. During a sequence where Colossus has been consumed by Cloak’s darkness (now possessed by another), he wanders through a waking nightmare that sees him haunted by the illusory deaths of former girlfriend, Kitty Pryde, and Zsaji, an alien healer he met on Battleworld. If you remember my discussion on Marvel Super Heroes Secret Wars, you may recollect that Colossus fell for the healer and won her heart, dooming his own romance with Kitty Pryde in the process, a development that Claremont played with in X-Men. Claremont bringing back that notion of Colossus’ failure and have it torment him while he resides in this “dark dimension” makes wonderful storytelling on the writer's part. I applaud Claremont’s ability to not just invent new conflicts or pepper his tale with new backstory, but to constantly reach back, reference, and reuse.

I use Colossus as an example, but the whole story is littered with these elements. You see it in Cannonball and Mirage’s friendship as they lead the team, from Magik’s use of her powers and the tension surrounding her control over her abilities, from Professor X’s relationship with Moira MacTaggert, a character Claremont introduced in Uncanny X-Men. It’s multi-layered continuity at its finest and showcases how interwoven comic book universes are meant to be and how satisfying it is for fans who follow different stories to see those stories intersect. Make no mistake, I do primarily enjoy particular heroes and particular stories, but it still gives me a thrill whenever a writer happens to reference a story I read that I never really thought they would bring up (or back up). Not to pat myself on the back, but I don’t think I would have enjoyed this story as much this second time around if I wasn’t as aware of Claremont’s X-Men run and the character development he fills it with, or if I hadn’t recently read Secret Wars or the MTU annual. Claremont’s writing is the kind that rewards you for paying attention to his previous work and, occasionally, the work of other writers. If anything, this tale interested me in reading some of the earlier New Mutants issues to gain an even better appreciation for the development I witnessed. 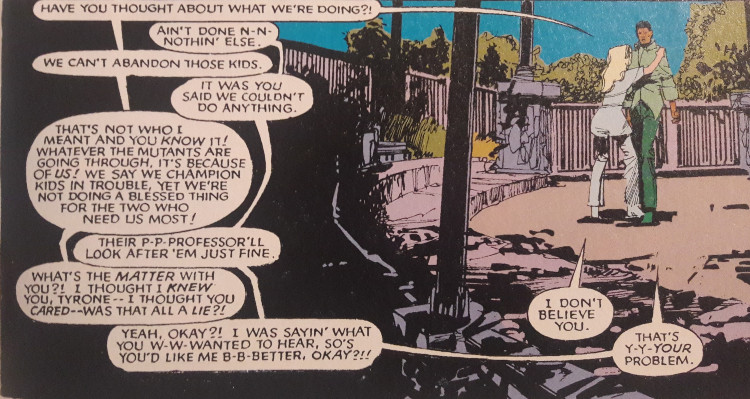 With Cloak and Dagger, the development is a slightly different story. Similar to Mantlo’s treatment of Cloak, I’m not a huge fan of Claremont’s handling of the character. For most of the story, without his powers, Cloak is simply Tyrone Johnson, a young man with an unfortunate stutter. I will say I appreciate how Claremont created a story primarily centered on Cloak as Tyrone (and, similarly, on Dagger as Tandy Bowen), even if some of the particulars seem off. Much like I have criticized Mantlo on giving Cloak too much of a one-track mind, I’ll make the argument for Claremont’s treatment of the character. Mantlo’s Cloak is so focused on his mission of justice, he’s blinded to other opportunities and realities. Once Claremont removes his abilities, Tyrone acts just as stubbornly, convinced his powers were a curse and grateful to be done with them forever. Problematically, Claremont seems to treat Tyrone as a different character from Cloak, and even if his version of Dagger is spot-on with Mantlo’s portrayal of her (a young woman imbued with love and light who wants to be human yet understands the responsibilities of bearing her powers), his take on Cloak reads weirdly.

If nothing else, Claremont confirms for me what Mantlo has only hinted at: the depths of Cloak and Dagger’s relationship. Mantlo seemed on the fence about whether the two were simply crimefighting partners, friends, or beaus. Claremont steers them decidedly into more romantic territory, and while he never states so explicitly, the way he has his characters speak about one another and to each other, in addition to how Sienkiewicz draws them together, all but cements his position on the matter. I can’t recall how other writers will take this moving forward, but in Claremont’s case, Cloak and Dagger are clearly meant to be a couple. It’s a welcome decision on Claremont’s part in my mind, because even if I’m not a huge fan of romantic subplots, at least Claremont takes a stand on what the two vigilantes mean to each other.

“Second time’s the charm,” you may say in regards to this story. A tale I found to be a slog the first time around has impressed me more after this second readthrough. Claremont is, as always, a master of dialogue and characterization, and though his attempts with Cloak and Dagger may not be as perfect as his workmanship with his mutant heroes, Claremont nevertheless moves their story forward and in a direction different than what we’ve seen before, combining a well-told story with deep pockets of lore.