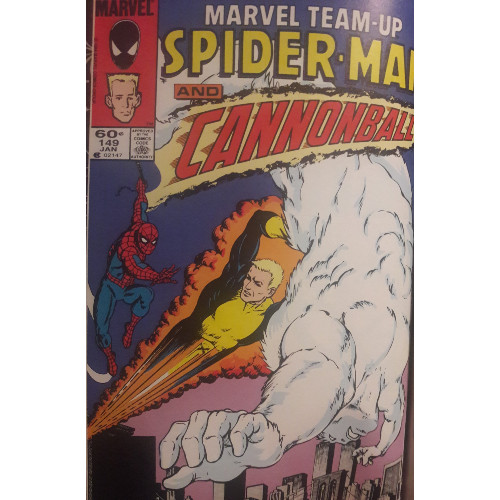 Several posts ago, we examined a Marvel Team-Up Annual where Spidey fought some mobsters alongside Cloak and Dagger and the mutant spinoff team, the New “We finally got a theatrical release!” Mutants. This time, instead of working with the whole team, Spidey’s paired off with just a single New Mutant. It’s the guy whose name you yell every time you jump into a pool.

Our dear friend Greg LaRoque departed the book prior to this penultimate issue of the team-up title (don’t worry, he’ll be back!), leaving newcomer Bret Blevins to work on a story by Louise Simonson, who we last saw on the Marvel Team-Up Annual where Spidey worked with Alpha Flight. Simonson, who will also script the final Team-Up issue, writes a tale that, unfortunately, is not quite as entertaining as some of the material LaRoque and writer Cary Burkett have contributed to preceding issues.

Our story features a monster made of pure energy dubbed “the Incandescent Man’’ by both his mysterious creators and a man on the street--a hilarious coincidence, since I’m sure most people seeing a monster made of pure energy wouldn't think “incandescent” as a descriptor...maybe Neil deGrasse Tyson? But I deGrasse. With a name that makes him sound like a carnival sideshow out of the Barnum & Bailey Circus, our lumbering antagonist does a lot more than...incandescent-ize? Glow? Let’s go with “glow.” He skulks his way through Manhattan like King Kong dipped in fluorescent paint, causing havoc and panic. 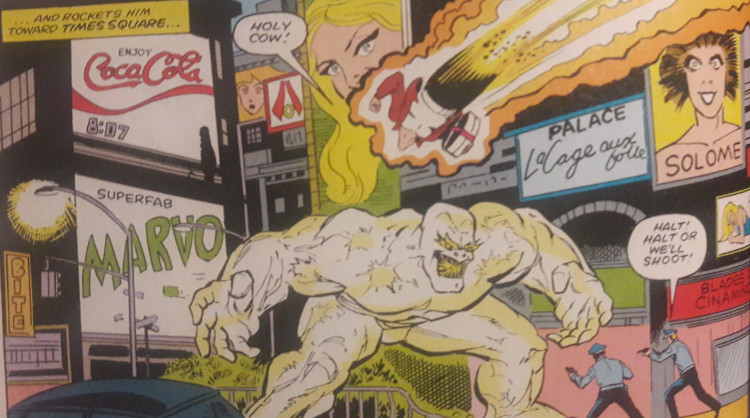 As the story winds down, Simonson seems to try and make a point that you’re to sympathize with the monster once you realize the facts behind his origin. Suffice it to say, the Incandescent Man wasn’t always luminous...and perhaps he was once more man than monster. As much as I’d like to simply see the behemoth as a misunderstood abomination, Simonson does little to persuade me into thinking that with the rest of the issue. Some mystery is nicely woven in--just who is that masked figure who seems so intent on tracking the Incandescent Man down? What do they want him, hmm?--but it arrives too late and not frequently enough to make much of an impact. And the dramatic “reveal,” or perhaps “summation,” that clues you into the creature’s origin comes out of nowhere, plopped near the end. Instead of feeling like a detective novel that lays out all the hints and clues at the end in a forehead-slapping, “I should’ve known!” kind of fashion, the comic just dishes out some exposition and hopes you’re following along to create something along the lines of emotion. But it doesn’t work.

The Incandescent Man, in my mind, could have used a bit more fleshing out over the course of the issue, but the lack of detail regarding his background is mayhap understandable: our fiery, fuming foe, after all, shares billing with two sporty superheroes. Spidey and Cannonball, an unlikely pairing, work together against the Incandescent Man, with Simonson throwing in some entertaining and unexpected connective tissue between the two. Cannonball, in New York looking for a gift for his mother, admires Spidey when he first sees him, feeling pretty confident that there goes a guy without a care in the whole wide world. Cut to Spidey, bemoaning the various cares Cannonball doesn’t think our hero has--it’s a minor moment, one that’s played for laughs, but entertainingly poignant all the same. Spidey, no stranger to a life of superhuman daring-do, does not have everything altogether...crime fighting experience can’t solve his currently bungled relationship with Aunt May nor can it assuage an Editor-in-Chief really wishing Peter Parker would capture less photos of the Web-Head and more pictures of different subjects. What are you going to do? Send Aunt May through a wall? Punch out Robbie Robertson’s teeth? I mean, theoretically, you could...but that’s not how Spidey plays.

I will point out that I like Simonson’s references to larger Spidey continuity. This, humorously, isn’t the first time Simonson has had Robbie critique Peter’s work (see MTU Annual #7 for another example), so I appreciate her keeping that as a “running theme” in a series that tends to not focus on overarching plotlines. Understandably, the “Robbie chews out Peter” subplot isn’t one Simonson created (we can thank Al Milgrom over in Peter Parker, the Spectacular Spider-Man for that), but I still appreciate her decision to include it. The Robbie subplot, plus the reference to Aunt May, are good tethers to other series and shows decent attention to detail.

Plus, moments like these--focusing on Cannonball’s “hero worship” of Spidey, juxtaposed with Spidey’s mundane issues and solutions to those problems--add a bit of depth to the issue. On one side of the equation, you’ve got this young mutant who thinks he’s going to flunk out of Professor X’s school while also fighting a giant sparkler demon protecting a fancy hat he bought for his mom. On the other side, you’ve got this other young guy who’s trying to take photos while fighting the giant sparkler demon because, as we adults are aware, those bills aren’t paying themselves. Turns out, when you put the characters side-by-side, you end up with a pretty balanced equation. 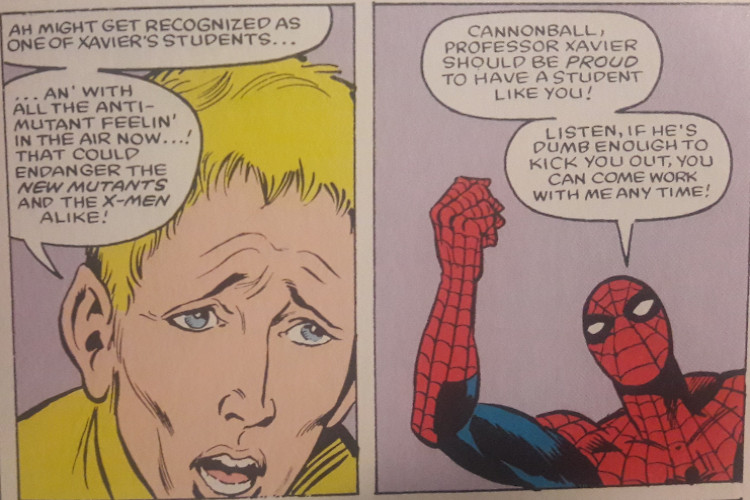 For the most part, Simonson doesn’t express any of this too specifically, which I enjoy. She keeps the similarities on the fringes, teases rather than tells. This gets ever so slightly bobbled at the issue’s end, where Spidey lays out a “moral” for Cannonball, dipping into a small, sappy mire of “You can do it, kid!” and playful punches on the arm. It’s not like Simonson fumbles the ball completely: earlier in the issue, Cannonball successfully executes a maneuver he witnessed Spidey perform to keep himself from crashing. This moment, to me, works much better than Spidey’s little monologue because it actually shows a character implementing something he learned from another character, rather than just being instructed or verbally taught a lesson to make him feel better. And, sure, I understand the thinking behind the sappy monologue: you want your issue to end on a high note. You want Cannonball to have succeeded and be encouraged by the more experienced superhero. And you want the more experienced superhero to realize, hey, it’s not like he’s a total screw up in everything! Still, it’s a tad distracting.

After several engaging stories from the Burkett-LaRoque team, MTU #149 is a backslide. Simonson does fit in various interesting pieces--her ability to juxtapose the characters of Spidey and Cannonball, of all people, is an unexpected treat, not one I was expecting heading into the issue; I also appreciate how seamlessly Simonson includes nods to ASM and PPSSM...yet some of these pieces aren’t given the time they deserve to become impactful. As a villain, the Incandescent Man is too much of a mindless monster running amok and not enough of a character to deserve much emotion dedicated to him, whether anger or pity. Simonson’s attempts at the end to give the villain backstory and to work in a nice little message for Cannonball feel clumsy. The issue isn’t wholly weighted down by these weaker moments, but I guess you could say it doesn’t have the same incandescence as it would without the problematic elements.