This nicely-paced, multi-part thriller enables Gerry Conway to ratchet up the stakes by introducing a new villain to the fold 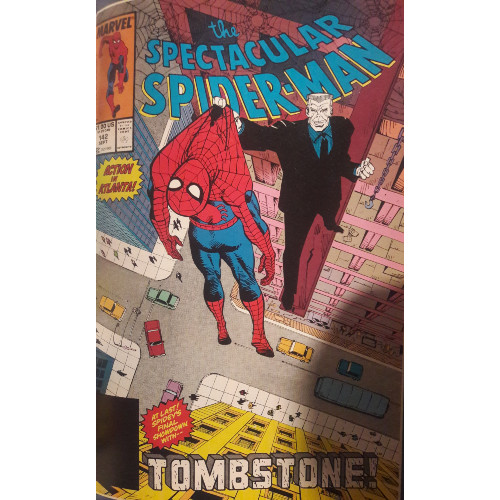 When we last examined a few Spectacular Spider-Man issues written by famed Spidey scribe Gerry Conway, the writer had crafted a brief two-parter while building anticipation for his first larger arc: the reemergence of Tombstone. First appearing in a Web of Spider-Man issue written by Conway, the albino hitman popped up again in the previous SSM issues we looked at, a shadowy menace with a few mysterious ties to Daily Bugle editor-in-chief Robbie Robertson.

Tombstone strides fully into the light in the next four issues, marking Conway’s most significant arc that we’ll be observing. Though never really a major player in the Spider-Man mythos, the hard-skinned, razor-toothed murderer nevertheless leaves somewhat of an impression on our hero and his cast of characters with this showdown. 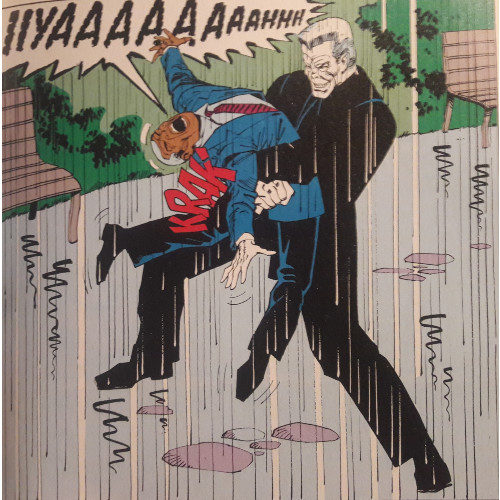 Spidey heads into decidedly “thriller” territory for this four-chapter arc as Conway weaves a web of violence, murder, secrets, and lies while Tombstone rises from the grave of memory. Robbie Robertson, who had all but forgotten his former childhood tormentor, comes face-to-face with the grating, gravely hitman in a confrontation that leaves him seriously wounded. A few years before Bane broke the Bat, Tombstone broke Robbie.

In a fierce half-panel, Tombstone squeezes the editor-in-chief’s body against him in an effort to silence the man he ironically calls his friend. It’s a scene that has gone down in the annals of Spidey history as one of Robbie’s most memorable moments, a seemingly horrifying tragedy that should leave him a broken man (in more than one sense). And, in some ways, it does. But Conway, perhaps choosing to limit the horror of the notion, shies away from breaking Robbie completely. We later learn that his back hasn’t actually been broken, but the man will still need months of recuperation to get fully back on his feet. 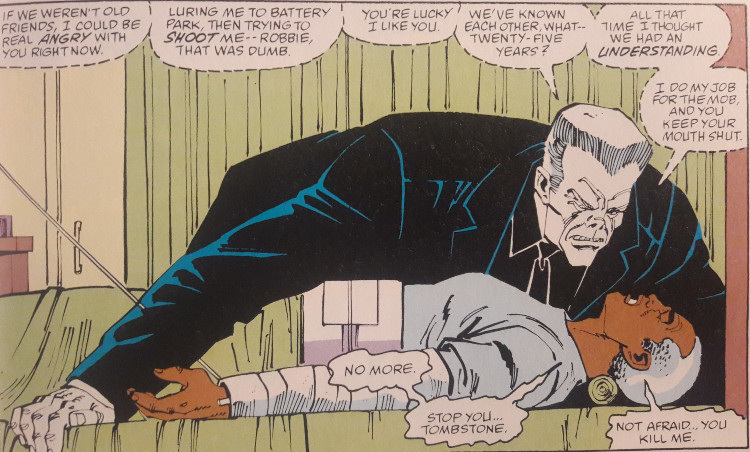 Harsh as it sounds, I was actually somewhat disappointed that Conway stepped back a little bit instead of going all-in with Robbie’s injury. He sets up the sequence perfectly--Robbie, wanting to tackle Tombstone himself, tries stopping the infamous hitman, only to wind up on the receiving end of the world’s most painful hug. The moment is a tragic injustice for the man, especially considering that Robbie is only trying to stop a criminal he knows he could’ve taken down legally years before. For all his efforts, he winds up broken...but then Conway backtracks just slightly, using the premise of Robbie’s broken back as a way to ratchet up suspense before turning the situation slightly better. A bit of a cheat, I guess I’ll say.

Nevertheless, the Robertson/Tombstone dynamic is set up surprisingly well. Conway weaves some interesting backstory between the two men, leaving Robbie struggling with guilt as he realizes he could have defeated Tombstone a long time before. The backstory also feels pleasantly articulated, not just lumped into the narrative for no reason other than to offer conflict. I never felt like Conway just plopped Tombstone into the middle of the story, even if the hitman’s relationship with Robbie had only been briefly alluded to once before. Their shared background isn’t anything unique--Tombstone haunted Robbie as a bully during their childhood, and Robbie later ran afoul of the albino while pursuing a story--but it’s personal enough to serve as a driving force through the narrative. 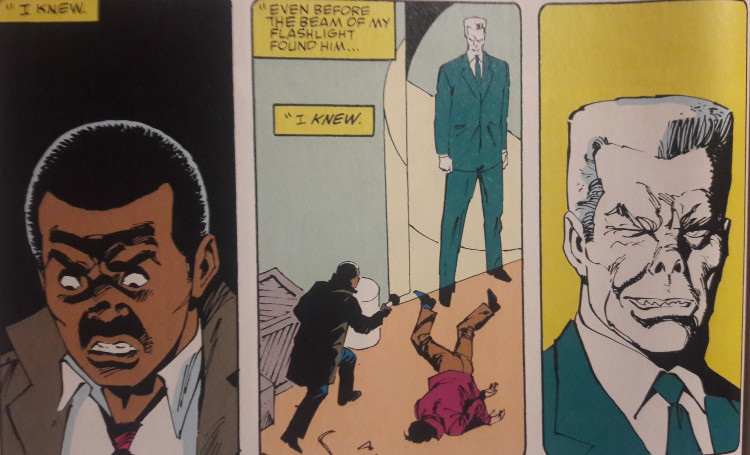 Questions of morals and justice pervade the four-issue arc. Even as Robbie lies broken in a hospital bed, he still wonders which morally acceptable path he should take, bearing the guilt of realizing he acted incorrectly in the past. Though injured, he isn’t completely out of Tombstone’s sights. The gangster makes no bones about his ability to harm Robbie in other ways--murdering his family, for instance--if Robbie doesn’t take the injury as the warning Tombstone intends on sending. How should Robbie go about putting an end to Tombstone, if at all? Nearly crippled by his own efforts against the madman, Robbie wrestles with other legal options...all of them seemingly leading to the same (literal) dead end.

Yet for all his threatening, Tombstone also ends up being a remarkable hand-to-hand combatant when it comes to fighting Spidey. Unfortunately, Conway never necessarily elaborates on why Tombstone can take on the Wall-Crawler, other than establishing the villain as a formidable assassin. I think I’ve grown accustomed to Tombstone as a character over the years and, thus, I just know he can give Spidey a decent fight. But for there to be no specific explanation in this first appearance strikes me as a little strange. 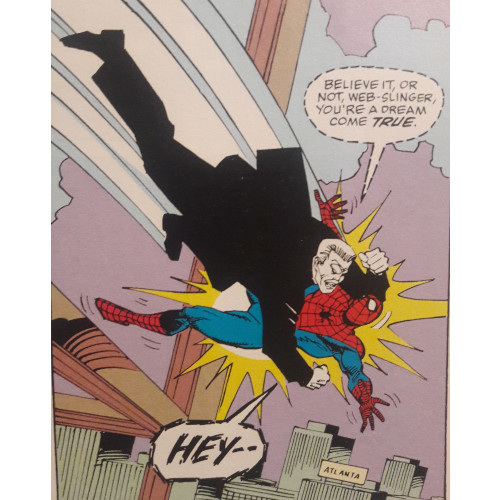 Another Conway creation returns for this series: Frank Castle, the Punisher. The gun-toting vigilante, at this stage, had become a character in his own right, distancing himself from his Spidery roots and embracing his own adventures. For Conway to bring his mad vigilante back is a highlight to his run here. Some years removed from the character’s original ASM arc, Conway is able to use the Punisher more freely. A sequence where the Punisher takes down a group of thugs intending on wasting him feels appropriately violent, yet not too over the top or gruesome. Conway handles the Punisher in a very “mature” way without him becoming too “adult” or blood-thirsty.

The arc ends with an “epilogue” of sorts, an entire issue dedicated to wrapping up some dangling plot threads surrounding the Punisher’s involvement. I originally intended to dedicate an entire post to just that issue--SSM #143--but thought better of it when I recognized the dearth of content I actually wanted to write about. It’s a fine issue, a bit of a palate cleanser that ends the Tombstone tale. However, it also kicks off another arc in this series which I have not collected, so I feel like it wouldn’t be a great idea to begin discussing an arc I wouldn’t be finishing.

As I mentioned in the last post, Conway is certainly setting himself apart from other writers of the time or even from his 19-year old self who came onto the scene after Stan Lee’s departure. Impactful as “The Night Gwen Stacy Died” is on Spidey’s legacy, the story itself feels a little overly dramatic at moments. Conway, in the years since, has reigned that urge in and embraced a more casual, personal tone with the stories he presents now in SSM. Therefore, his Punisher is a colder, more calculating vigilante; his Tombstone is a lethal gangster instead of a flamboyantly costumed supervillain; his conflicts are deeply emotional and juggle moral issues. Tombstone’s proper introduction to the Spider-Man mythos is nicely handled by Conway, who proves he hasn’t lost his touch, and has in fact only improved in the time since he tossed Gwen Stacy off a bridge.