Though readers are presented with an odd assortment of stories, each narrative in this volume stands strongly on its own 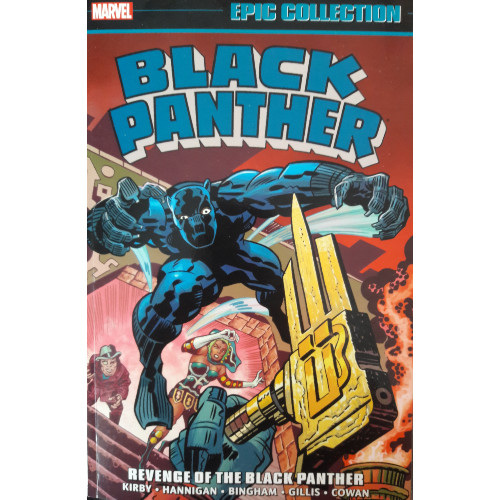 A few posts ago, we examined the first Black Panther Epic Collection, a volume made up of a trilogy of stories. Introduced by Stan Lee and Jack Kirby, Prince T’Challa of Wakanda started out as a somewhat cliche African prince in a Fantastic Four story some have deemed too stereotypical for its own good. Nevertheless, that two-parter laid the foundation for later tales as the Panther not only joined the Avengers but received solo adventures, courtesy of Don McGregor and Rich Buckler. Under McGregor and Buckler, T’Challa flourished, becoming an extraordinary hero as he battled Erik Killmonger for supremacy over Wakanda.

Yet, McGregor ended our last volume on a bit of a downer, an unfinished story that saw the Panther journey to America to a solve a murder. Regrettably, the narrative was left to the winds, trailing off with a hoarse whimper. Fortunately for readers wishing to pick up the second installment in the Black Panther’s Epic Collection series, endings are just a few hundred pages away.

But first, Jack “King” Kirby has a thing or two to say.

Much like the first volume, T’Challa’s sophomore Epic Collection is a grab-bag of stories, not necessarily an anthology, but not a series of consecutive issues either. This is, I’m assuming, because the Wakandan King hadn’t received an ongoing series, his appearances relegated to limited series and Avengers issues. As you can see, we therefore have three different series published over 11 years which we will be discussing over the course of the blog.

The disparate natures of the stories, I would argue, don’t necessarily hurt the volume overall. In fact, the 17 Black Panther issues by Kirby slide effortlessly into the pages of Marvel Premiere, as Hannigan and Bingham pick up immediately where Kirby leaves off; the only rocky transition occurs between Marvel Premiere and the second Black Panther limited series, softened by the fact that this second series is eight years removed from Marvel Premiere and has almost nothing to do with those issues. All this means is that, for us reviewers who love examining thematic throughlines, the task of finding overarching connections is made a bit more difficult.

Tonally, the stories are all over the place, but again, since they don’t represent the same narrative or even same historical period, this isn’t a huge issue with the volume overall. Jack Kirby, serving as writer and penciler on most of the first series, goes for an Indiana Jones-style of story, turning T’Challa into a glorified treasure hunter. Kirby’s prose, though certainly overly dramatic, fails to reach the heights of forced drama a writer such as Stan Lee would scale with ease, thus imbuing a somewhat more realistic quality into his stories. As artist and scripter, Kirby controls his entire narrative beautifully. The herky-jerkiness that comes from the Marvel Method’s attempts to pair dialogue with art or plot is smoothed over by Kirby’s mastery of both pieces. Characters say what they need to say and move on; no over-blown soliloquies bog down the pages by a writer looking to fill the space.

Narratively, Kirby fashions a novel tale about exploration and adventure. Though he wonderfully grasps the narrative, Kirby stumbles in crafting a voice for the Black Panther. Under his pen, T’Challa mutters lines like “Let’s make tracks!” and tricks an enemy by doing push-ups. T’Challa doesn’t necessarily read like the wise king and heroic protector that McGregor shaped him to be during the “Panther’s Rage” arc. Kingly duties are little found in Kirby’s early pages; in fact, the first chunk of the series is devoid of anything Wakandan.

This changes as his story goes on, allowing Kirby to represent Wakanda differently from other portrayals. Kirby’s sci-fi sensibilities come to the fore in the series’ latter half, and I’d argue that Kirby did more than any artist before to shape our modern understanding of the Black Panther’s nation. Technological marvels dot the capital city as Kirby stresses the futuristic aspects of Wakanda; Kirby is also to be praised for his introduction of vibranium’s origin, crafting a story of a meteor and the Great Mound and cementing the metal’s place in Marvel’s history. Kirby wonderfully weaves a subplot while T’Challa is off adventuring, introducing a new villain who is slowly being corrupted by vibranium. The villain in question, General Jakarra, helps kick the series’ second half into high gear, shifting the series away from its tomb raiding roots and propelling it into something more fittingly heroic.

Sadly, Kirby is unable to finish his series; similar to how his original Eternals series was left incomplete, Kirby leaves the book after the 14th issue, letting Ed Hannigan take over. Hannigan does admirable work, wrapping up Kirby’s plot before playing with his own tales in the final Panther issue and three issues of Marvel Premiere. Hannigan is less interested in Kirby’s sci-fi acumen and is instead concerned with finishing off a straggling plot left by Don McGregor after Jungle Action was cancelled: the Panther vs. the KKK! Hannigan brings back previous characters, finishing the story in a handful of issues. To his credit, Hannigan does his darndest to make his story meld with McGregor’s prior narrative, and his only slip-up is a rather forced connection to McGregor’s cliffhanger. This, of course, has little to do with Hannigan’s talents and more to do with how Jungle Action was cancelled...or, more accurately, how McGregor’s story was abruptly halted when the series was axed. The only real shame is that Hannigan is given little to contribute on his own merit--a unique tale showcasing a Black Panther/Klaw fight is among the sharpest tales included in the volume but is really the only “original” story Hannigan offers. 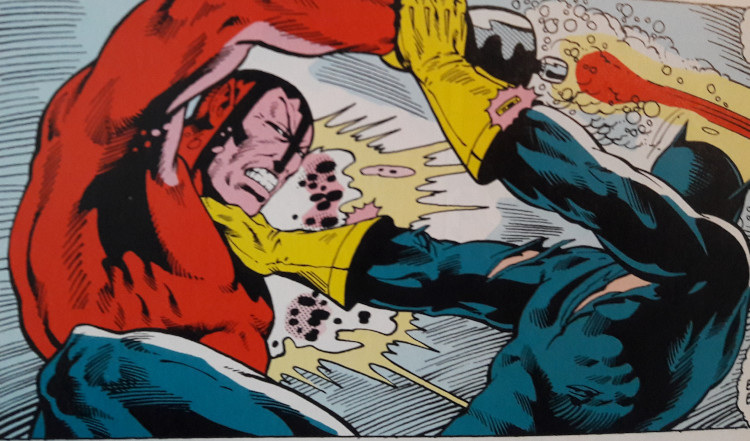 Skipping ahead eight years, the Epic Collection wraps up with a four-part Black Panther miniseries, by Peter B. Gillis and Denys Cowan. This series causes perhaps the largest tonal shift; suddenly, we go from Panther duking it out with Klaw to Panther fighting apartheid in 80s Africa. Hannigan, in his series, had introduced the fascinating notion of Wakanda being more open to the global stage. Though I’m not sure how other writers and artists referenced that idea being 1980 and 1988, Gillis and Cowan pounce on the concept, driving T’Challa into the heart of a decidedly grim topic: racism on African soil. The two handle the issue interestingly enough, adding in subplots concerning a panther-like monstrosity who may or may not be a god, a cabal of white supremacist “superheroes,” and T’Challa’s own fading abilities.

The plot itself is worth reading, but Gillis excels at fashioning T’Challa as a torn man. On the one hand, T’Challa wishes to stand up for the downtrodden of Africa while simultaneously coming into conflict with his duties as the Wakandan king. Add in the loss of his abilities, and you get some interesting character work on T’Challa. My only complaint about the character regards his eyes--Cowan draws them green and cat-like, luminous and piercing. Neat an effect it may be, but there’s no narrative explanation for why he looks the way he does. Google doesn’t seem to have an answer for me, so I have no way of telling if this artistic decision was for the limited series only or if it spooled into other tales. 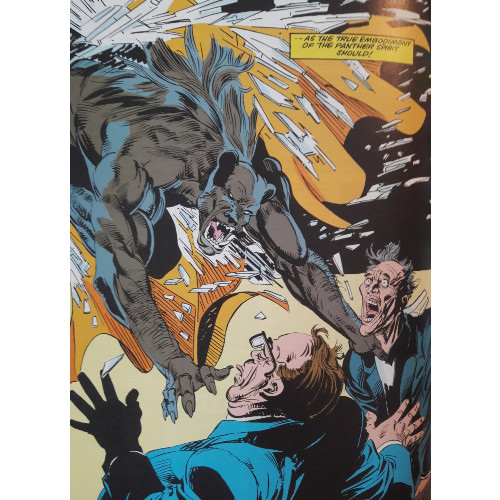 As a bonus, we're also given a small glimpse into a Chris Claremont/John Byrne story that saw Black Panther team up with X-Men member Storm. I discussed this small tale over in a blog focused on the second Uncanny X-Men omnibus, so I won't elaborate here. The short story's inclusion certainly doesn't feel unnecessary, as it takes place between some of the series presented in this volume. And for anyone interested in Panther history, it makes sense. But this tale feels simply included for the sake of completionism, or perhaps for anyone interested in the T'Challa/Ororo relationship unraveled by later wrtiers such as Christopher Priest and Reginald Hudlin.

Individually, these stories all stand on their own, more or less. Each contributor does an engaging job crafting standalone arcs that sorta-kinda feed into each other. Kirby creates the largest lasting impression, designing a gorgeous Wakanda, but each writer involved does admirable work, even when it comes to forcing plots together to make sense. The only downside to this is, as I’ve said, you’re presented with stories that jump all over the place. When an editor must put together a selection of limited series instead of throwing together an entire run of issues, they have little choice but to do so. The gaps and tonal shifts, evident as they are, should not be surprising. If anything, this Epic Collection is a wonderful way to gear up for future Black Panther stories, particularly those by Christopher Priest, who I hope to be examining at some point in the future. Priest will utilize some of the details introduced in this volume, and for that reason alone, the volume’s first half is worth checking out. And though the Hannigan and Gillis stories (as far as I recall) have little impact on Priest’s acclaimed run, they’re both able to hold water, offering a decent second half in the wake of the King’s departure.