Jack Kirby's rapturous imagination spills over in a cosmically-charged series that explores various fantastic ideas...even if it remains woefully unfinished 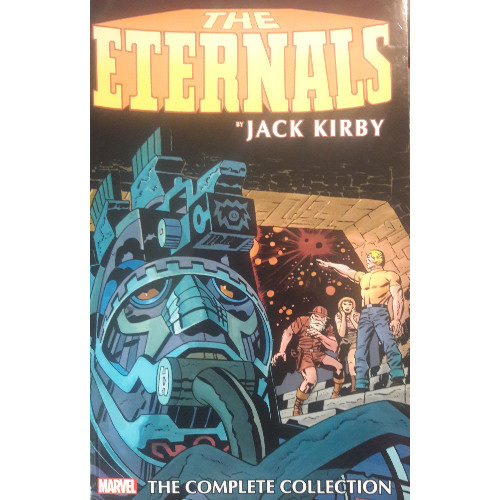 Jack Kirby. There’s a reason he’s been called “the King.” Among his many contributions to comicdom lore are famed Marvel characters such as the Fantastic Four, the X-Men, Captain America, Black Panther, Thor, the Hulk, and the Silver Surfer. After a stint at rival DC Comics, where he created the Fourth World and the New Gods (including Mister Miracle and Darkseid), Kirby returned to Marvel, penning and drawing Captain America and Black Panther series as well as inventing new creations...like the Eternals.

Their cinematic debut slated for a November 2021 release, the Eternals will finally join the ever-growing Marvel Cinematic Universe, as several of Kirby’s creations have already done. Godlike in power and stature, the Eternals represent a new kind of thinking on Kirby’s part. Perhaps inspired by cosmic storytelling over at DC, Kirby pitched the Eternals as the answer to the question: where do we come from?

The Eternals by Jack Kirby: The Complete Collection 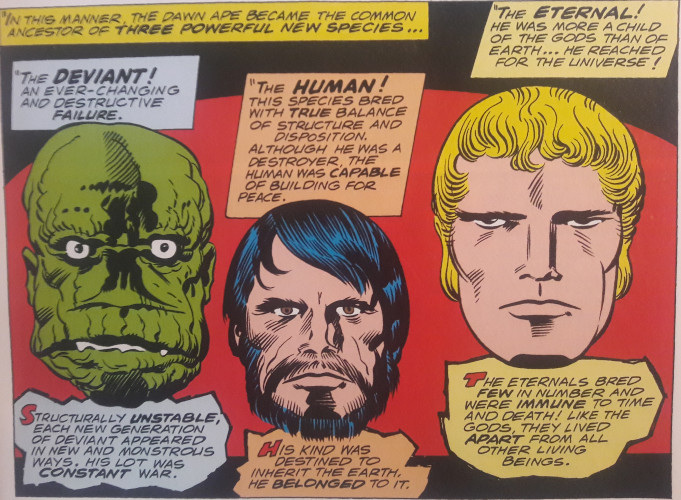 Who are we? How did we come to be? What do we base our existence on? Powerful, existential questions such as these have festered in the minds of men and women for centuries. Philosophers have probed, scientists have theorized, ministers have explained, writers have pondered...in short, we have spent years upon years seeking the answers. It makes sense that, at some point, comics would get in on the game. Kirby’s imagination breathes life into an idea inspired by the 1968 book Chariots of the Gods?: mankind owes its existence and mythology to extraterrestrials. In Kirby’s vision, mankind’s development was jumpstarted by Celestials, massive cosmic giants conducting experiments on various worlds. Starting with a common ape, the Celestials initiated the development of three different races--humans, Eternals, and Deviants.

From here, Kirby attempts to make sense of humanity’s penchant for similar yet contradicting mythologies. He envisions the biblical Flood as the same event which swallowed the ancient, hypothetical lost continent of Lemuria and drove the Deviants underground. An Incan temple is reimagined, not just as a place of worship, but as a landing strip for the coming of the Celestial’s Fourth Host. Kirby takes time to explain how Eternals became the gods of mythology; Deviants, the monsters of fables and the demons of hell. Elements such as these, woven into the issues, bring Kirby’s premise to life: there must be an explanation for why so many myths and religions contain similar pieces, some basis upon which they rest. 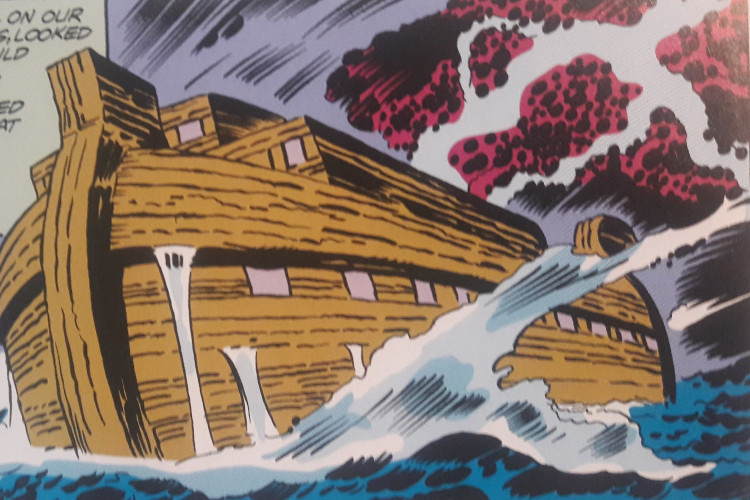 The concept is highly original, and perhaps only an artist like Jack Kirby would be able to so completely envision the idea while making certain it’s brought to life properly. As I mentioned in my discussion of Kirby’s Black Panther series, the creator maintains beautiful synergy between his art and his narrative. Word balloons match the actions happening without resorting to needless exposition; unnecessary verbiage is cut down (though admittedly not done away entirely) as Kirby no longer needs to bow to the whims of another writer. His Celestials, and their technology, are appropriately enormous, crafted on an unimaginable scale that makes me excited to see his vision come to life in Marvel's upcoming film. Kirby is fully dedicated to his primary concept--exploring mankind’s birth--maneuvering himself past potential religious pitfalls to create something unique. He’s not looking to squash current religious notions or beliefs; he’s merely hypothesizing about what could have happened if giant space gods touched down on Earth.

And not just any Earth. By time you begin wondering why a Deviant invasion of New York isn’t stymied by Avengers, the Fantastic Four, or the X-Men, you realize: this isn’t happening on Earth-616, the primary Marvel Universe. No, Kirby intends the events of his series to play out here, in our world. His question of humanity’s creation, though certainly hypothetical, isn’t supposed to ruminate on the origins of the Marvel Universe but on our universe. It’s a rather surprising revelation when you come to it, as you realize you’re looking into a world that, for all intents and purposes, is supposed to be the world you live in. 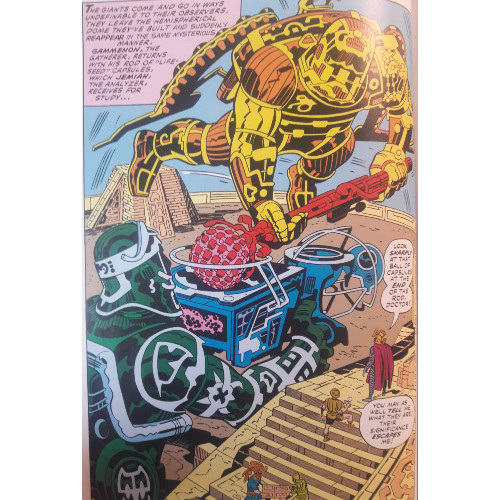 The effect is twofold: first, it explains away why those superheroes haven’t come and driven away the demonic Deviants yet. Kirby doesn’t have to worry about questions like that, nor does he need to concern himself with offering fan-service by integrating as many superheroes as possible. Sorry, greedy reader, but you’re not getting an Ikaris/Spider-Man crossover or a Makkari/Quicksilver race today. This stuff is, at the moment, standalone. The closest Kirby comes to referencing the Marvel Universe proper happens in an issue where a couple of comic book geeks create a Hulk robot that subsequently battles Ikaris, one of the Eternals. Otherwise, Kirby's world doesn't have to jive with the larger machinations of the Marvel Universe; his New Yorkers aren't accustomed to monsters or world-eating entities, his "gods" don't need to fit within already established pantheons.

Second, Kirby's setting alters your perspective of the story and the world. Not once did I ever come close to thinking Kirby’s ideas were plausible, but I understood his intentions nevertheless. Several religions have varying “origin stories” that all claim to be true; though I subscribe to one particular tale myself, I can see where an individual like Kirby, trying to make sense of the various myths, comes to conclusions about the similarities. Far-fetched it may be--again, I’ll never be convinced Noah’s Flood was caused by space gods dropping a nuke on Earth--but it gives Kirby the material to weave his series. 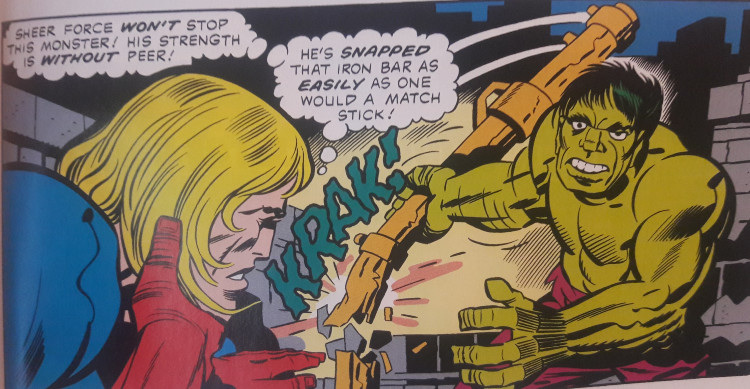 Fortunately, Kirby approaches his material respectfully. He’s never derisive of religion, nor is he trying to assert that religion is false is unnecessary. He’s simply fascinated with the particulars and came to the conclusion that there has to be a connection between different belief systems, drawing on similarities such as Great Flood accounts to make his argument.

Kirby can, at times, become so focused on this idea that he loses sight of his story. None of the Eternal characters come off as genuinely remarkable or memorable. I didn’t walk away from his series believing Ikaris was a more interesting character than Eternal leader Zuras and so on and so forth. The exception to this rule is two Deviant characters--Reject, a human-looking Deviant consigned to destruction because of his “abnormal” appearance, and Karkas, a brutish yet intelligent monster who inhabits none of his race’s overly aggressive tendencies. These two individuals represent the crux of Kirby's work, the most "human" his characters ever get. Among the various gods and monsters, these two stride on uncertain legs--the monster rejected for looking like a man, and the monster who desires humanity. Their fates become utterly entwined with Kirby's burgeoning cast. Even Kirby's human characters, such as Margo Damian and her father, don't express as much humanity as the two Deviants. 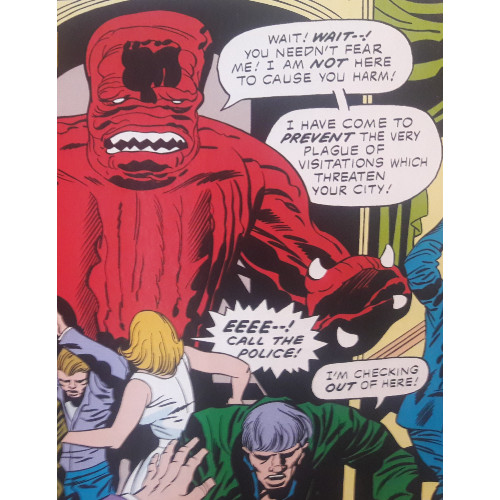 Yet, despite the lack of characterization, Kirby’s greatest strength comes in his concepts. Readers should prepare for a visual feast. An ancient Incan temple transforms into an alien landing strip. A colossal Celestial bears down on sunken Lemuria, demolishing the once-proud city. Deviants fly hither and yon, transforming New York into a battleground. Ideas hit the reader at a fast pace, yet each are rendered so dramatically, Kirby makes certain he constantly maintains control. The way he strings myths together make for immersive reading; Deviant and Eternal societies feel fleshed out, with cities, rituals and traditions; fantastic weaponry bears much of Kirby’s brilliant design work and implicitly toasts his wondrous imagination; his overarching narrative toys with ideas of humanity’s purpose and relation to its possible creators. Kirby, always, stretches for the cosmos, hinging his series on notions of destiny. The massive Celestials bear down on earth, exploring like we’d stroll through a park, examining their handiwork...perhaps taking pride?

Under Kirby’s pen, we never find out. The overarching Celestial concept is left unfinished. The space giants roam the earth, preparing to judge whether it has flourished or diminished in the wake of their initial experiments. Likewise, a few subplots are left straggling, ideas introduced and set aside to build tension and hype yet never returned to. This is not, conversely to what one might suspect, Kirby’s fault. After 19 issues, Eternals was cancelled, leaving the Celestials to wander the Earth, their judgement postponed, not by their own cosmic wisdom, but by the overpowering dominance of the gods of editing and finance. 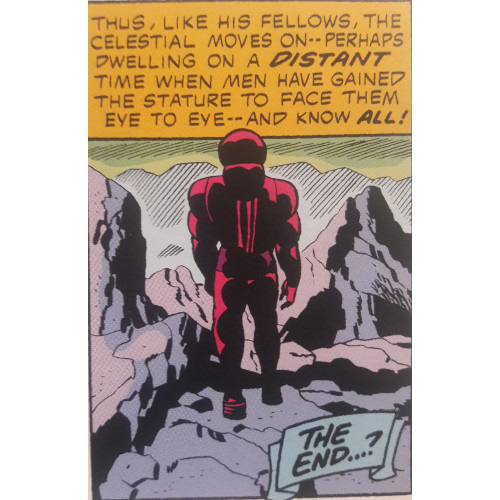 Fear not long, faithful reader. As I hope we will soon discover together, Kirby’s concepts were picked up by later writers and toyed with, his dreams brought to fruition. The continuation of the Eternals’ personal sagas may come at a price, unfortunately, but we will have to wait to see what that cost is when Roy Thomas takes the crown from the King and shapes the future of Marvel’s upcoming cinematic ensemble.