This collection compiles three tales more entertaining than I originally gave credit, showcasing bravery and fortitude in the face of cataclysmic terrors 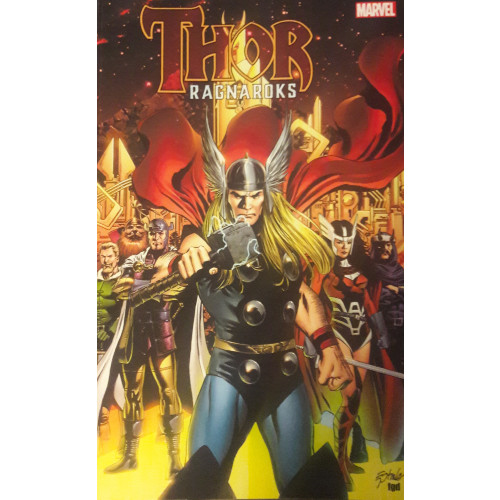 In 2017, the same year the massively popular Thor: Ragnarok film was released, Marvel published a surprisingly sizable volume containing three different Thor-based miniseries, all dealing with the concepts of “Ragnarok” or “endings.” The marketing gimmick is obvious–to capitalize off the film, Marvel selected three stories which seemed to best fit the world-ending themes evoked by the movie.

I picked the volume up a while back from our library, probably to “prepare” myself on the lore behind the film. Certain images stuck with me, lingering in my imagination, though I can’t say I was overly impressed with the material collected. Truth be told, I don’t recall whether I actually finished the entire volume.

In the time since, I have grown a wee bit more familiar with Thor lore. Last year, I tackled the headstone-sized mammoth that was the Mighty Thor by Walt Simonson Omnibus, as well as a Roy Thomas/Ralph Macchio/Mark Gruenwald narrative which brought Jack Kirby’s Eternals into Marvel canon. The Eternals story is entertaining enough, but I was blown away with Simonson’s take on Thor, his fellow Asgardians, and his beloved home of Asgard. Simonson’s fingerprints are all over the MCU’s “Thor trilogy” (soon to be a tetralogy), and his influence is unmistakably present even in more current Thor arcs.

Perhaps inspired by those lingering images I previously mentioned, I recently purchased a copy of this Thor: Ragnaroks volume, choosing to give it another spin of the hammer. We shall see if my recent labors overthrow my prior reading, guided by the spirit of Simonson. 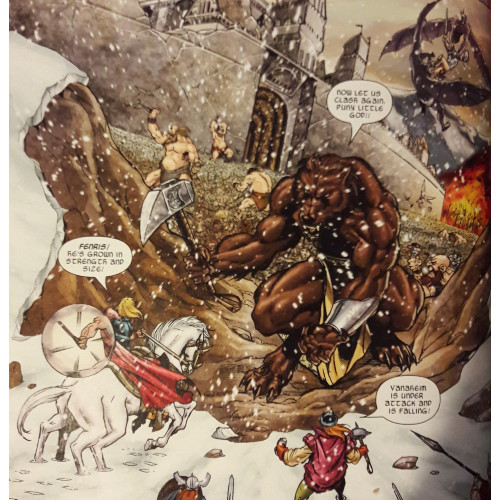 A brief note before we begin: I have recently been reading the Sequart Organization’s book How to Analyze & Review Comics (edited by Forrest C. Helvie). In addition to being a helpful resource in discussing how to review comic narratives, this guide has also reshaped my perspective on the individuals who contribute to each issue. I had never given much thought towards colorists or letterers before, and this book has made me aware of my ignorance. Henceforth (as perhaps a certain God of Thunder would say), I intend on crediting those individuals who I have previously ignored, given the important work they do to shape the tone of each narrative.

A strange way to begin our look at the end, but an important note nevertheless.

The “Ragnaroks” in the title imply a plurality of world-shaking disasters, Doomsdays and Armageddons to plague our stalwart God of Thunder and his band of staunch allies. In this, the title is somewhat misleading. Only one real “Ragnarok” occurs in this volume, insofar as Norse storytellers defined the end of days for their powerful pantheon. “Thor by Michael Avon Oeming” might have been a tad more accurate title for the volume as a whole, as the writer contributes to each story. This is really his opportunity to shape–or, literally deconstruct–the Thor mythos for a brief time. 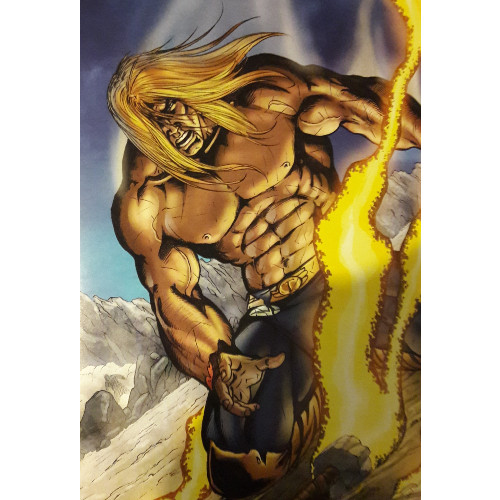 The three tales are distinct, with the latter two paired better than with the first. Oeming’s Blood Oath limited series has nothing to do with the overarching “Ragnaroks” concept Marvel is trying to wring from this volume; the regular Thor series issues (making up the actual “Ragnarok” arc and serving as Thor’s “Avengers: Disassembled” tie-in issues) and the Stormbreaker series are better aligned, woven lightly into one another and encapsulating themes of earth-shattering devastation. Again, I would argue Blood Oath was included because of Oeming’s involvement, as well as overlapping characters.

Despite the volume’s forced cohesion, each story works remarkably well on their own. Blood Oath feels like a classic epic saga, with Thor and the Warriors Three sent on a mythical treasure hunt across several pantheons to fetch items for a vengeful Frost Giant. Our questing comrades engage several deities across Greek, Irish, and even Egyptian mythologies, and Oeming’s quick pace lets the action relent only momentarily. We are thrown into a chaotic world reminiscent of sagas such as the Odyssey and Aeneid, with gods embarking on a dangerous mission with incredibly high stakes. Friends must trust one another, complete puzzles, engage in physical conflict (a Thor vs. Hercules fistfight is a standout scene), and utilize their individual talents to overcome other gods and monsters. 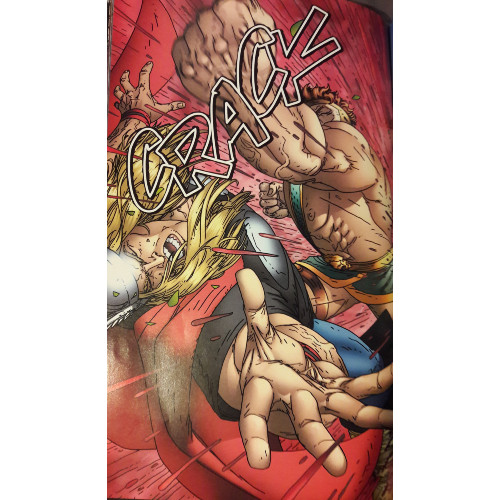 Oeming’s ending is, unfortunately, a little flagging for this series, as a few coincidental occurrences seek to wrap up plot points and halt the generally brisk pacing the rest of the series maintains. Up until that moment, the questing adventure is wonderfully fun, with our four protagonists hurling verbal barbs and jests at one another yet standing staunch when moments call for heroic, sacrificial deeds.

The other two tales, the actual “Ragnarok” story arc and a mid-Ragnarok series starring Beta Ray Bill, work off each other better and more appropriately fit the volume’s premise. Each arc tackles endings for different civilizations, painting grand, Trojan War-style battles in the one and taut sci-fi battles in the other. A true sense of menace presides over Oeming’s “Ragnarok” arc; Thor had staved off such cataclysmic endings in the past, but Oeming’s story reeks of doom and sacrifice. Ragnarok is coming and, suddenly, it’s arrived, and Thor can no longer pass off his or his people’s fate. Oeming’s narrative is much darker than Taiki Waititi’s film, with a deep sense of finality written over it, despite Thor and the Norse gods’ attempts at fighting fate. 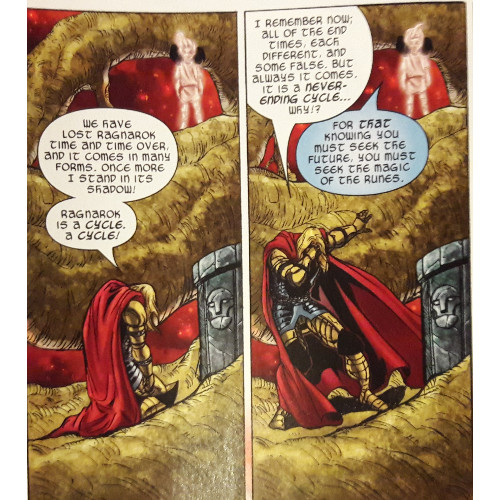 This is where Oeming dives deep into Thor’s character and toys with his personality. Simonson’s run played with similar concepts–Thor was placed in several situations where his loyalty to Asgard and his people were brought to the fore, particularly in moments where Odin was missing or presumed dead. Oeming’s Thor is thrust into a world where he must lead his people against fate itself, and even with dread looming over the series, Oeming does well to never make Thor disparagingly morose. His Thor is a leader, as evidenced by his loyalty to his people and showcased, in microcosm, in the Thunder God’s caring for an orphaned child.

Oeming should also be praised for his ending–the conclusion to his arc overturns some assumptions regarding the entire Ragnarok process; though I am loath to dive into detail, I should mention that the ending is satisfactory in how it brings about the Twilight of the Gods and how it comments on the fundamental processes behind Ragnarok.

Stormbreaker flows from the “Ragnarok” arc, allowing the volume’s final third to shift focus. Beta Ray Bill, ungluing himself from the “Ragnarok” epic, is given a chance to interact with his own narrative, somewhat separate from the Asgardian war boiling in the Nine Realms. Oeming makes reference to the story, certainly, but he gives Bill the opportunity to face his own struggles and battles his own foes. 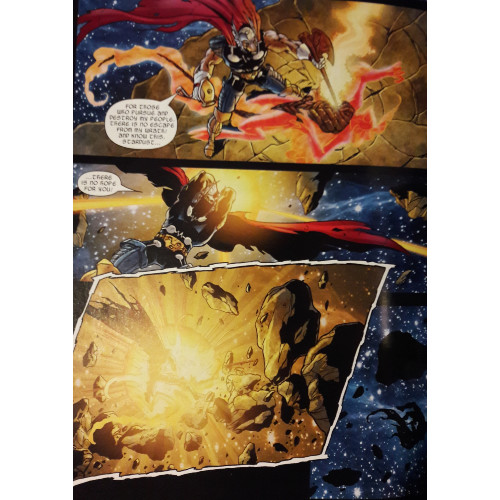 I have never been a huge fan of Beta Ray Bill. I think Simonson’s original concept is intriguing–so far as Bill is another character worthy of wielding power equal to Thor–and the writer utilized the Strombreaker-swinging Korbinite well during his run. I have little knowledge of how the character was used in the years since his inception, whether he was a strong recurring character in the Thor books or if he drifted in and out of obscurity. So to say I am not much of a fan merely indicates I have little knowledge and experience with the character. Oeming weaves him well into this series, and I appreciate how the writer takes a protagonist so strongly tethered to Thor lore and gives him the chance to stand on his own.

Bill faces horrors of cosmic proportions in this tale, including one which leads to a genuinely gripping plot twist. Andrea di Vito takes a break from massacring the Norse pantheon to craft conflicts which tear planets asunder. Seeing the illustrator, backed by Laura Villari’s dynamic color palette, tackle both high fantasy and space opera in the same volume gives a wonderful glimpse to di Vito’s diverse strengths. We see different types of “gods” work their wonder and wrath through each series, whether it’s through the single-minded annihilation of the Asgardian adventurers or through the equally focused destruction of peoples and planets. 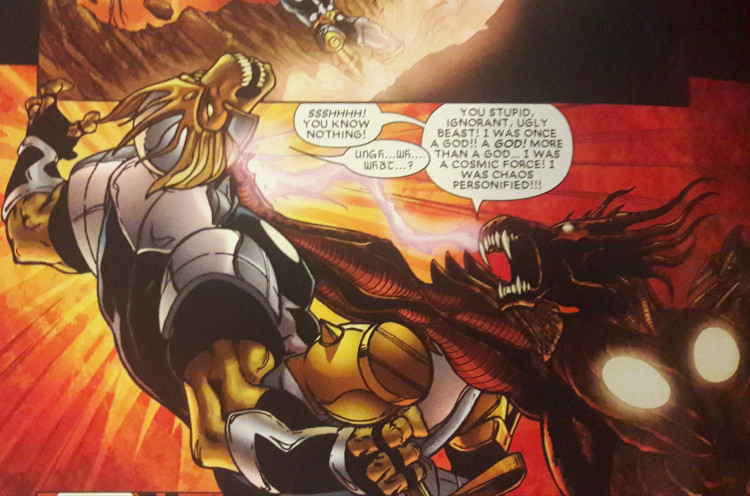 Through all this, Oeming never forgets a key element which made Simonson’s run on The Mighty Thor so gripping and entertaining: the humanity of our god-heroes. Simonson’s whole run is steeped in ancient Norse legends, characters, and environments which our gods, monsters, and heroes treat as everyday fare. Thor and a band of mighty warriors are traveling to Hel to save his people? We call that “Thursday” around here, pal. Oeming’s heroes bear the same visage, treating valiant quests, portended dooms, and planet-shattering fistfights as part and parcel of the lives they lead. Call it “fate,” “destiny,” “wyrd.” Some choose to fight it, others accept it. Yet that sense of finality to one’s actions, an overarching meaning or purpose, is tightly woven through this entire volume.

The theming is a nice touch, one I hope is intentional on Oeming’s part, whether or not he was inspired by Simonson. Other heroes can talk about destiny or fate flippantly, but it’s an inherent trait within Norse mythology. This is what they do. Grab your trusty, Dwarf-forged hammer and go fight the literal incarnation of Death or your irritating, half-god/half-Frost Giant step-brother. The intentionality of facing this destiny makes a god like Thor so human. He can’t just snap his fingers and will the world to work as he wishes. He’s forced to, often humbly, fight and forge on. Like the humans of Midgard he so dutifully protects, Thor, too, is chained to struggle. 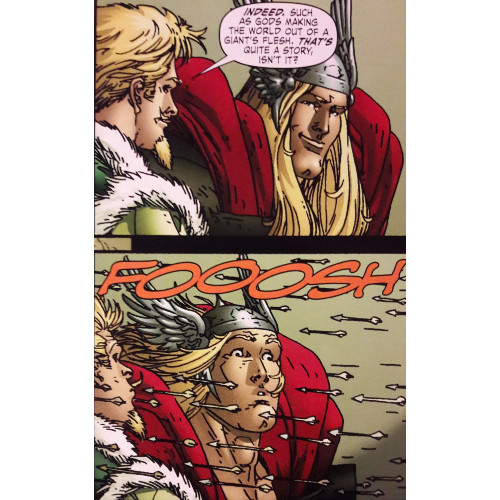 I was pleasantly surprised with the entirety of this volume. The “Ragnaroks” aspect to the whole tome is a tad forced, though I suppose I owe a debt of gratitude to Waititi’s film, without which, I expect, we would not have this collection. But pouring over these pages, I rediscovered three epics I had not given much thought to previously. Oeming’s stint within the Nine Realms may not be as heralded as Simonson’s or Jason Aaron’s takes on the Norse God of Thunder, but these three sagas are each highly rewarding in their own right. They combine frenetic action with the highly human portrayals of Asgardians heroes and villains Simonson’s run is renowned for. Having some prior knowledge of Thor may be beneficial before jumping into this volume, but if you’re looking for engaging narratives surrounding Asgard and her lofty denizens, why not consider beginning at the end?