(Strand)om Stories: The Mighty Thor and The Eternals: The Celestial Saga Review

This volume packs in an epic narrative, and despite a somewhat sticky middle, culminates in a finale worthy of the Thunder God himself 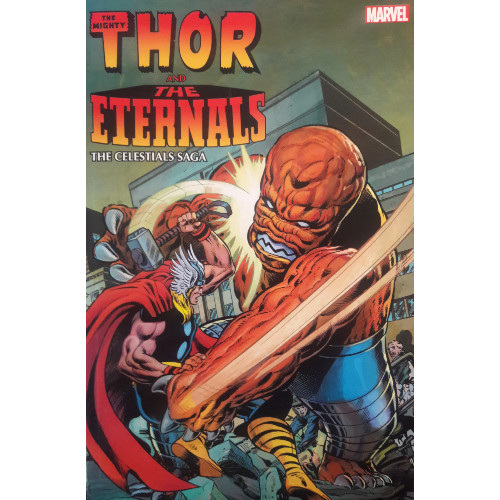 When Jack Kirby introduced the comic book reading world to the Eternals, he seemed to have one specific purpose in mind: explain, in his out-there, fictional way, the origins of the world. Our world. Kirby’s 19-issue series, which not only birthed the Eternals but their Celestial masters and Deviant enemies, was a study in the varied mythologies of the world, asking where they intersected and what root cause could explain those commonalities.

Just one problem: The Eternals was cancelled before it was finished. Kirby’s towering Celestials were left wandering the face of the Earth, heralding a fifty-year judgement that would spell the fate of the world. Like monstrous Caesars, the Celestials peered down from their vaunted vantage points, hands jutting out, determining whether to give our little blue sphere an accepting thumbs-up...or a disapproving thumbs-down. A cosmic cliffhanger.

Enter Roy Thomas and the one Marvel title that could sufficiently wrap up the unfinished saga of the Eternals and their cosmic creators: The Mighty Thor.

The Mighty Thor and the Eternals: The Celestial Saga 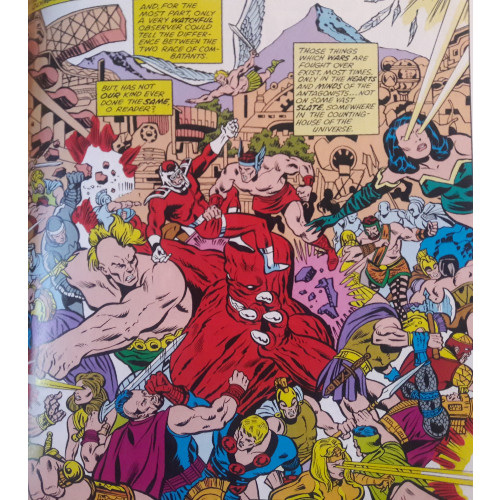 Kirby’s original Eternals series, it seems, was not intended to coincide with the regular Marvel universe of Earth-616. Within his world exists a dearth of superheroes--the Avengers don’t show up to aid the Eternals, the X-Men don’t pop up to battle Deviants. The only non-Eternal heroic character to appear is the Hulk, and even this is simply a facsimile created by two overzealous comic book fans. As I said, Kirby’s intentions seem to be focused on answering his own ponderings about the creation of our universe and its many religious stories and mythologies.

Roy Thomas, in particular, has the unenviable job of rounding up Kirby’s pantheon of Eternals and pulling them into the Marvel Comics Universe proper. He does this rather seamlessly, essentially by retconning Kirby’s original intentions and integrating the powerful pantheon into the same universe as characters such as Thor and Hercules. By doing so, Thomas certainly ditches Kirby’s concepts and notions, and an argument could be made as to how this does and does not work. On the one hand, I was somewhat disappointed by how effortless Thomas was able to pull in Kirby’s creations. As respectful as he is to these cosmic characters--more on that in a bit--he fails to defend or expand upon Kirby’s original notions. I say this fully understanding that we’re discussing comic books, of all things; whatever Kirby’s high-falutin ideas may have tried to accomplish--like, y’know, explaining the origins of mankind and mankind’s myths--the cancellation of his series cut his concepts off at the knees. If they were going to be resurrected, it would make sense to ditch the philosophizing and stick with the characters he created. Marvel’s loss, in my opinion, but what can I do about it? 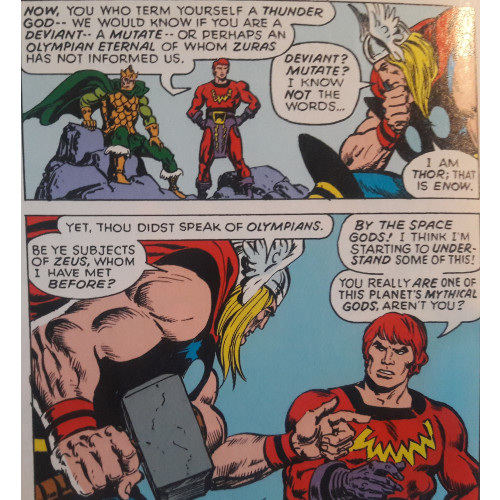 On the other hand, Thomas’ ability to rope in the Eternals also gives him the freedom to play with different yet remarkably dramatic ideas. Once the Eternals are squarely planted in the MU, Thomas doesn’t stop there: why not bring in Hindu deities? Egyptian gods? Chinese divinities? Thomas may not be analyzing these myths for their commonalities, but he hops aboard the immortal bandwagon and uses this epic arc to span the cosmos. Suddenly, Marvel’s universe is expanding in a myriad of directions all at once, and Thomas (along with Macchio and Gruenwald) handles this expansion with aplomb. There’s pure joy in how the writers bring in these powerful characters, having Eternals battle Norse and Olympian deities, plumbing the depths of Norse mythology, raising stakes and scopes to mythic proportions. If you want a story that’s completely bonkers yet wonderfully enrapturing, this is a tale to pick up. If you enjoy watching demigods slug it out over the fate of the world, grab this volume.

As I mentioned, Thomas honors Kirby’s characters, and he does an absolutely wonderful job continuing their stories. Kirby’s cancelled series, inevitably, left several dangling threads--what of the fifty-year judgement? What of the Eternal known as “the Forgotten One,” who was left at the mercy of the Celestials? What of the secret agents that snuck into the Celestials’ compound at the start of Kirby’s series? And what of his human characters, Doctor Damian and his daughter Margo? Thomas makes sure to take hold of each of these plots and thread them throughout his story arc, making this series of issues a remarkably fitting companion piece to Kirby’s. Questions are answered, seemingly forgotten developments are touched on. I actually found myself mentally transported back to Kirby’s original series several times, going “Right, right” when Thomas brought up a moment or character I’d completely forgotten about. As wonderfully as it would have been for Kirby to wrap up his own series, Thomas proves himself a worthy successor.

Additionally, Thomas isn’t afraid to explore new ideals of his own--such as the other pantheons of gods--and taking Kirby’s characters in directions the master storyteller may have never perceived. Thomas really feels at home with this material, like he’s been given the responsibility of doing something fresh with old arcs or finishing the story of another creator. His writing exudes confidence. Perhaps his work is emboldened by the Thor framework he structures around the Eternals’ inclusion; Thomas bridges the mythological worlds seamlessly, and I believe that doing just a second Eternals series would have harmed the work overall. While a standalone second Eternals series may have felt like more of the same Kirby-esque storytelling, Thor brings a new level of drama. Through his eyes, we perceive what was established under Kirby in a new way. Maybe we’ve seen Celestials before, but now we see them afresh through Thor’s eyes. Maybe Kirby described the powers of his Eternal cast members, but now we watch them pitted against other gods. The tensions are delightfully unique.

Thomas is, in once sense, actually writing two distinct stories, one within the other. While the first tale hinges on Thor’s attempts at understanding the Eternals and repelling the Celestials, the second delves deeply into Norse mythology. About halfway through the tale, Thor, seeking answers to questions about Odin in relation to the Celestials, gets a crash course on Norse mythology he himself was previously unaware of. Much of the story feels like Thomas’ way of answering dangling plot threads from other Mighty Thor story arcs, and while these are by no means uninteresting, they do cause the Celestial story to slow down dramatically. Thomas retells various Norse legends--the cycle of Ragnarok, the tale of Sigurd and Brunhilde, the origins of Thor himself--and occasionally loses sight of the bigger picture. I found myself wondering what these older legends had to do with the larger Eternal/Celestial conflict, and though a narrative throughline is established, it feels somewhat forced and lengthy. Thomas’ second story, though interesting in and of itself, feels like it would be better suited elsewhere. I didn’t mind the deep dive into the mythological aspects--Thomas genuinely retells the tales in an entertaining manner, making you feel like he didn’t just sit down with a stack of Norse storybooks and copy their material down word-for-word. It just doesn’t blend well enough with the other story he’s seeking to tell until you get to the very end. Thomas inches his way towards a very important point, but when you get to the end, you’re left wondering how all the meandering got you from Point A to Point B. The path exists, and perhaps a second reading would help, but I often felt as if I was clearing underbrush or brambles as I worked my way through Thomas' mythological retelling this first time.

I should also, even just briefly, mention how well Mark Gruenwald wraps up the story. He’s allowed to compose Thor’s epic 300th issue, featuring the climatic duel against the Celestials. Gruenwald does Thomas proud in this single issue, crafting a battle for the ages. Ancient weapons sing to life against devastating cosmic power as Gruenwald creates exciting moment after moment. The final battle sequence is reminiscent of his last Squadron Supreme issue, which also hinged on a thrilling confrontation between good and evil. The man certainly knew how to bring action and suspense galore, and at the risk of sounding purposefully vague, he delivers one heckuva beatdown here. The rest of the volume may be interesting in the sum of its parts (mostly), but Gruenwald hammers home the action in a truly exciting conclusion. 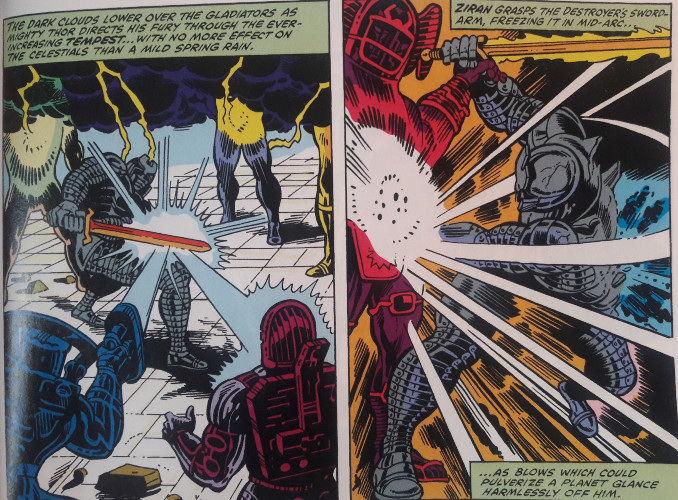 When Thomas hones in on the Eternal/Celestial/mythological pantheon aspects, he feels like a worthy successor to Jack Kirby. Kirby’s intentions may be pushed to the side in favor of his characters, but his story is wrapped up. Odin knows if Thomas wrote the story in a way Kirby would have appreciated, but I felt like the writer did the Celestial, Eternal, and Deviant characters justice while bringing them fully into the Marvel Universe. The story, yes, becomes a little dodgy in the middle, as about 100 pages of Norse mythology are used to answer a question that could (and should) have taken much less time to suitably reply to. A small loss, however, when you know the thrilling ending, courtesy of Mark Gruenwald. For readers looking to learn more about Eternals in anticipation of the upcoming movie, this volume provides reading almost as essential as the King’s.