An epic tale of destiny and personal struggle lays at the heart of this volume, and it's only when our characters wander from that path that this Complete Collection lacks focus 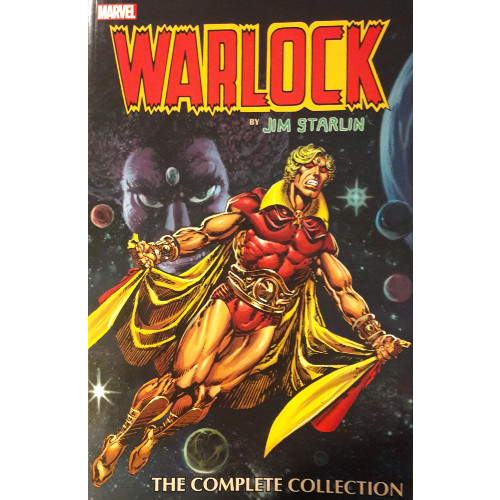 Welcome back to the road to the Infinity Gauntlet!

Last "(Strand)om Stories" post, I examined writer and artist Jim Starlin’s run on Captain Marvel, a woebegone Marvel title in dire need of TLC. Starlin brought ingenuity and creativity to a book languishing in obscurity; the series lasted a few years after Starlin’s departure, and the author’s “follow-up” graphic novel, The Death of Captain Marvel (spoilers!), remains to this day a cornerstone classic in the cosmos. Shortly after transforming Kree warrior Mar-Vell into an intergalactic champion, Starlin found himself back in the driver’s seat, piloting the adventures of another golden guardian of the spaceways: Adam Warlock.

Originally introduced as “Him” by Stan Lee and Jack Kirby during their famed tenure on Fantastic Four, Warlock was remolded by Roy Thomas into a Christ-like figure and savior of Counter-Earth, created by the High Evolutionary. Starlin would then return to the cosmic corner of the Marvel Universe, taking a so-so character and turning him into a cult hit, much like he did with Captain Marvel.

We’re taking a look at those adventures today, with this decently-priced complete collection, covering Starlin’s stint on Warlock and the further seeds he planted for his most famous spaceway saga. This is Part 2 of my "Infinity Prelude," as we get ever nearer to Starlin's epic limited series. 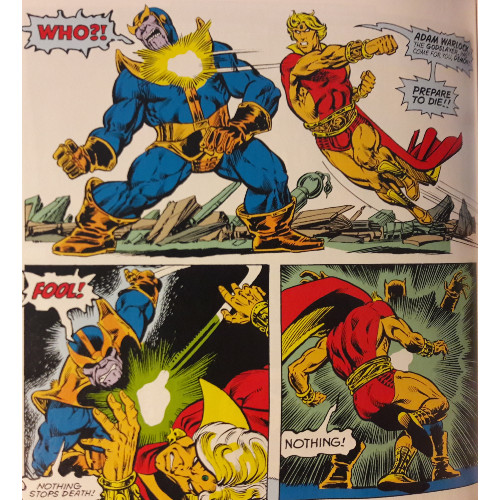 One of my (admittedly few) gripes with Starlin’s Captain Marvel stint was how philosophically blunt the narratives are. Starlin wields a verbal hammer instead of a scalpel, making it absolutely beyond certain that his Captain Mar-Vell is different from prior takes on the character. The captain, eventually, utilizes his actions to prove Starlin’s points in an epic confrontation with Thanos, but one overly dramatic scene sees Mar-Vell undergo a deep transformation, Starlin’s words blatantly driving home the concept. Particularly when paired with his powerful, fantastic art sequences, the words become redundant.

Fortunately, readers can expect a less trite narrative with Warlock. Starlin is still verbose, yet his words ring more poetically, less ham-fisted. Take an issue where Warlock winds up in a mental hellscape run by clowns for example. The whole sequence is a deconstruction of the character as the grinning ghouls attempt to break him mentally–scenes where Warlock navigates a trash heap strewn with diamonds the clowns absentmindedly toss aside, or where he battles a monster comprised of the darkest innermost thoughts and urges he would never act out publicly, carry more philosophical heft. Add in that the clowns’ names are corruptions of famed Marvel creators (“Jan Hatroomi” is “John Romita” blended together, and “Lentean” has most of “Stan Lee” mixed into it), and you get some genuinely interesting commentary on both the character and the individuals Starlin worked with. 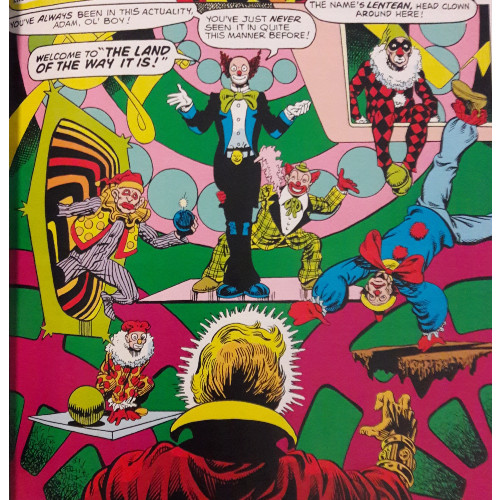 It helps that, in Warlock, Starlin creates a tortured character. Mar-Vell’s transformation, from mere warrior to cosmic guardian, is certainly unique, but at the time Starlin took over Warlock, ol’ Adam was already a pretty formidable space-faring defender (lower-case “D”). Starlin turns inward with Warlock, allowing the character deep rumination on his personality and purpose over the course of several issues. The Strange Tales and first several Warlock issues form a coherent narrative where Warlock, plus allies Pip the Troll and Gamora, face down the Magus, a future, villainous version of Warlock. Starlin toys with Adam’s personality as he faces his corrupted self, battling against time and fate to steer clear of the Magus’ path. Starlin creates an engaging battle of free will between the two powerhouses, establishing conflict beyond fisticuffs. Is Warlock genuinely fated to become his darker self down the line? Or can he find some way to break the seemingly destined darkness?

Even as he crafts the Magus/Warlock scuffle, Starlin toys with conflict elsewhere. Internally, Adam’s plight is deepened by the Soul Gem attached to his forehead–eventually revealed to be one of six (more generalized) “Soul Gems” (later termed “Infinity Gems”)--which he often calls “vampiric.” The Soul Gem is cast as a living organism, ravenous in its hunger, and only Warlock’s control can keep it from devouring the souls of others…except when necessary. Starlin turns the Soul Gem into a metaphorical symbiote of sorts, a being attached to Warlock and begging for a form of release, which Adam vehemently strives to deny. This conflict is introduced in the “Magus saga” (as I’ll offhandedly refer to it as) early on, sidelined a bit for Warlock/Magus scuffle, and then utilized more heavily in later sequences. Starlin crafts this mental/spiritual/philosophical dispute in such a way that, post-"Magus saga," the reintroduction of the Warlock/Soul Gem conflict feels natural to the character and his growth… 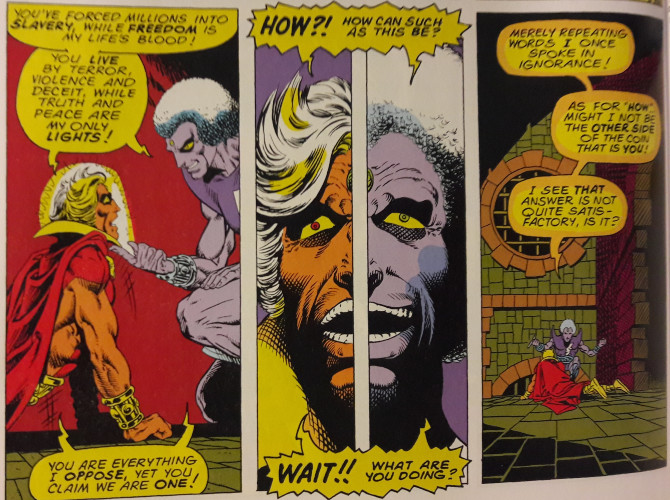 …which is great, because the “Magus saga” sees Starlin at his writing best. Throughout the entire saga, Starlin has a vision, a very clear narrative arc for Adam. Events click together in favor of the overarching saga being composed–Adam meets Pip the Troll, and their reluctant friendship drives some of the action; Starlin introduces Gamora, the self-proclaimed “deadliest woman in the universe,” and her role becomes more complicated as the issues progress; Thanos, that darned Mad Titan, fresh off his defeat at Captain Marvel’s quantum-banded hands, is reintroduced to fans as a scheming near-anti-hero, more complex than his previous straight up villainous persuasion. The whole narrative hinges on Warlock’s conflict with himself and the Magus’ Church of Universal Truth, a pointed denouncement of the Catholic Church, yet written complexly…meaning Starlin never comes across as a screaming lunatic demanding the destruction of religious institutions.

The Church, and the Magus’ control over it, is actually a terrifying threat to not just Warlock but the universe at large. Starlin weaves war based around manipulation, not death or destruction, and gets at the core of how religious institutions can become corrupt or can corrupt and control others. I am so used to cosmic-centric story arcs harping on the destruction of planets and universes (and not just in comics like Infinity Gauntlet, Annihilation, or even Crisis on Infinite Earths, but films such as the Star Wars series) that Starlin’s work with the Church is both refreshing and chilling. The Church grasps at universal enslavement, enforcing “truth,” with Starlin creatively combining religious language and iconography with fantastical sci-fi designs. Ancient words blend together with futuristic technology to create a fearsome adversary that still feels relevant and terrifying today without Starlin coming as pandering or spiteful…how’s that for an achievement? 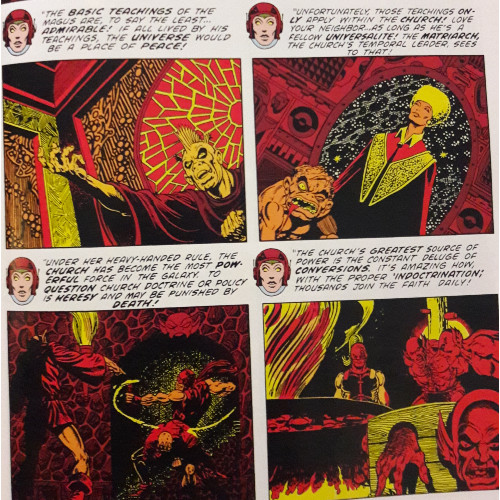 Post-“Magus saga,” Starlin meanders a tad. With his epic narrative completed, he seems a little lost with what to do with the title or its cast. It’s telling that the first post-“Magus saga” issue is a goofy one-and-done centered on Pip the Troll, allowing him some additional “screen time” while Warlock goes off and broods…which largely shapes his character over the next several issues. Starlin gives Warlock one final arc, pitting him against an adversary called the “Star Thief”; though this villain is based on an engaging premise–which I will not reveal but merely remark I was reminded of Todd Dezago and Mike Wieringo’s Tellos–the stakes become far too high far too quickly to fully appreciate. The villain’s origin is convoluted and hard to accept, and Warlock isn’t even the hero of the story, leaving him to wander in the series’ final issue, fittingly titled “Just A Series of Events,” as that’s all which happens.

Starlin rounds out his time with this mystic marvel with a two-part, Thanos-centric tale which, rather nicely, wraps up some dangling threads left over from the Warlock issues. Starlin nods to his Captain Marvel run by including the good captain, as well as several Avengers and the Thing, as the manipulative Mad Titan reveals a scheme seemingly plotted during the Warlock issues. Starlin pulls in various characters and threads to “cap off” his time as this cosmic creator with a story that is actually a really nice finish to his prior arcs, wrapping up dangling threads, answering questions, and delivering one fantastic sequence aping a previous scene so well I believe Starlin plotted the whole thing before writing these two issues. 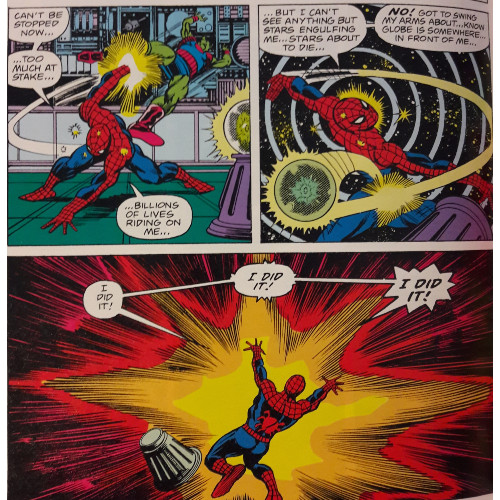 And may I also offer a brief exultation to Starlin’s use of Spider-Man, one of the true stars of this two-parter. Spidey’s given an interesting internal conflict as he faces a cosmic crisis he’s fairly unfamiliar with–as he points out, he’s used to thumping costumed crooks, not alien armies and deranged demigods. Yet Spidey’s given an absolutely wonderful standout scene, genuinely impacting the narrative’s events, in a sequence which will probably go down as a Top 10 Spidey moment in my mind. Having pushed back his fears, Spidey gives his all and saves the literal universe in the process. Not bad for a kid from Queens.

Much like with Starlin’s Captain Marvel narrative, I cannot say whether the writer/artist had a final, culminating story in mind when he first created these stories. We have absolutely wonderful development here–new characters such as Pip and Gamora, the focus on Warlock’s internal conflict, made tangible by the Magus, and the development of Thanos into a deeper, slightly more sympathetic and understandable antagonist. Starlin is at his best when he’s crafting conflict for Adam to endure and overcome, when he wrestles with questions of destiny and fate–what is Warlock’s place, specifically, in this mounting Marvel cosmos?–and when Thanos becomes a deeper, well-rounded, far more sinister character. Every so often, Starlin loses his way, meandering a bit when there’s no larger storyline to plot and develop…but these temporary diversions take little from a collection packed with powerful characterization and a main protagonist, torn and troubled, wrestling demons within and without to discern just where he belongs in the burgeoning universe.