This volume is a tad too grandiose at moments, but it's a fantastic companion piece to Captain Mar-Vell's final adventure 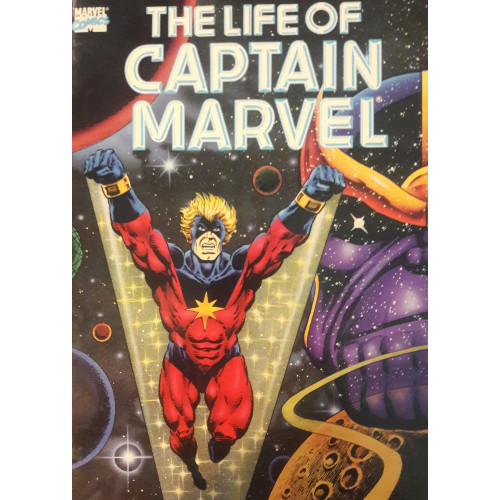 My third “Spider-view” review, posted a little over two years ago, examined Marvel’s first-ever graphic novel, “The Death of Captain Marvel.” The 1982 narrative, written and illustrated by Jim Starlin, remains even now a wonderfully powerful story, touching in its depiction of Mar-Vell’s valiant struggle against cancer and how the superhuman community rallies around their dying friend. It’s a classic of the genre, and I would highly recommend it for any Marvel Comics fan, or even reader in general, not just fans of the character or Starlin.

But Mar-Vell’s legacy, important as his death is, extends far before his dying breath. Introduced in Marvel Super-Heroes #12 by Stan Lee and Gene Colan, Mar-Vell was a Kree captain, stranded on Earth by his superior Yonn-Rogg. Two issues after his debut, the good captain was given his own series, which seemed to receive only middling attention from fans. Though poor sales threatened cancellation, Starlin’s tenure, starting with issue #25, would help keep the book afloat. The series ran for 62 issues total, ending in 1979.

I am a few “Spider-view” posts away from that other commendable cosmic comic written by Starlin–the famous, MCU-founding Infinity Gauntlet miniseries. I recently gained some interest in the cosmic side of the Marvel Universe and thought, Why not take a bit of a dive into some pre-Gauntlet escapades? Through the next handful of posts, I intend to cover some dramatic space sagas leading up to the Infinity Gauntlet series. Perhaps through these, we shall gain better perspectives on Mar-Vell and his cosmic counterparts, including Drax the Destroyer, Gamora, Adam Warlock, and the Mad Titan himself, Thanos.

Up first in this "Infinity Prelude," a glance backwards, into the life of Captain Marvel, as written and illustrated by Starlin.

The Life of Captain Marvel 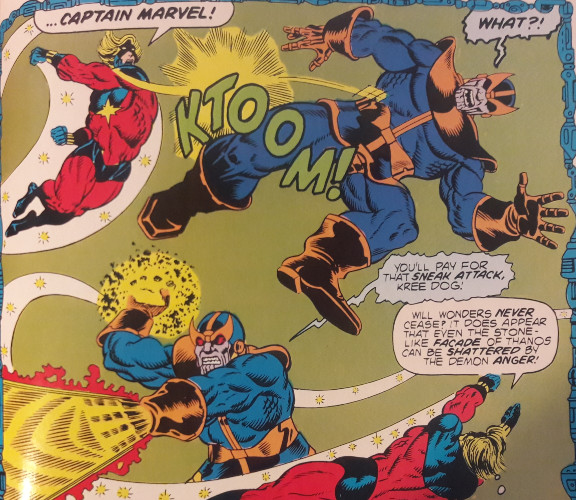 Generally, I enjoy highlighting volumes which are easily accessible and easy for readers to purchase, should they enjoy the story I review and wish to dive in for themselves. Knowing that, it seems strange for me to cover a volume originally published in 1990, thirty-two years ago. Rest assured, for the curious, the issues contained in this volume are available through a few other collected editions, including volumes in Marvel’s Masterworks and Essential lines, as well as a Life and Death of Captain Marvel volume and a Captain Marvel by Jim Starlin: The Complete Collection volume. These latter options, however, are pricey, so for the interested, I would suggest cobbling together the Death of Captain Marvel trade and this Life of Captain Marvel volume. Maybe we’ll get lucky and Mar-Vell will receive his own Epic Collection someday…

So for those completionists who wish to supplement their "Death of Captain Marvel" stories with a volume three decades old, is Life of Captain Marvel a worthy purchase? If you’re looking for the seemingly cheapest way to purchase Jim Starlin’s run on the title, the answer is absolutely. 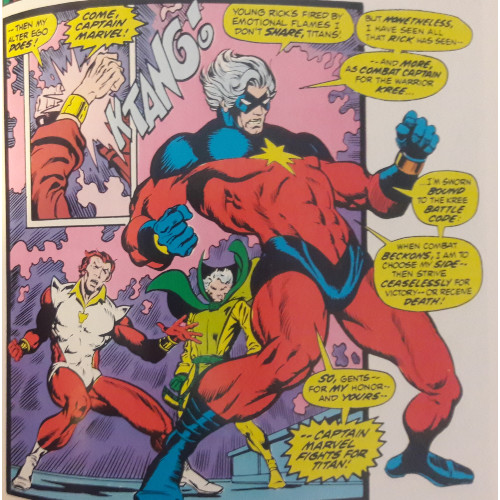 I don't quite know what it was about the Captain Marvel book which never caught on with fans prior to Starlin coming on to the series. According to one blog post I read, it seemed to have been a combination of uninteresting characters–including Mar-Vell himself as well as Rick Jones–and disorganized concepts thrown haphazardly into the title. And then you have the idea that Mar-Vell primarily existed for the company to claim copyright for the “Captain Marvel” title. Thus, Mar-Vell’s adventures seemed driven by obligation, not from a sense of wonder or engaging storytelling.

Starting in issue #25, Starlin changes all that. Heck, even before issue #25, Starlin plants the seeds for what will become his long-running tenure over the Marvel cosmic landscape (“cosmic landscape”?), introducing Thanos and Drax the Destroyer in Iron Man #55. Though originally based on Jack Kirby’s New Gods character Metron, Thanos was eventually reimagined as a Darkseid ripoff…and, in the event that isn’t clear in his first appearance, the Mad Titan becomes bulkier later in this volume…guy must bench press asteroids or something. In Iron Man #55 and onward, Thanos proves himself a grave danger to the universe, but he’s not yet the calculating megalomaniac Starlin would shape him to be in later stories, such as his Adam Warlock narratives and his Infinity Gauntlet miniseries. Thanos’ motivations are, at this stage, much simpler than his MCU counterpart, shrouded in mystery as he appears like yet another run-of-the-mill, extraterrestrial world conqueror. He lacks the fiendish, calculating manipulativeness he’d gain in later stories. 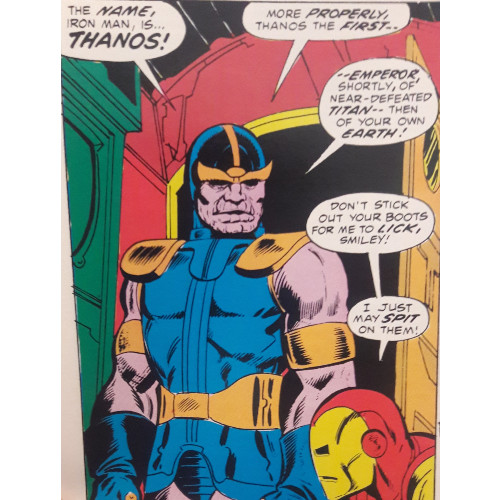 I am not certain how wide Starlin’s focus was in shaping the Marvel cosmos at this time; while later stories, such as his run on Warlock, feel like they intentionally expand Marvel’s galactic cast of characters and the publisher’s space bound treasure trove of lore, Captain Marvel’s aspirations appear more demure. If anything, Starlin attempts to take a second-rate character and give him his shot at superherodom. This does include the creation of other characters, such as Thanos and Drax, and the narrative does involve Mar-Vell saving the universe from Thanos’ first attempt at conquering the cosmos, but the scope feels more personal. The focus is on Mar-Vell and his growth as a character.

Starlin takes this space cop–whose “switch out with a teenage boy” shtick always bore shades of that other guy once named Captain Marvel–and imbues him with personal struggle. Mar-Vell finds that just soaring around the spaceways and fighting foes toe-to-toe isn’t enough to save the day; Starlin directs him down a path of enlightenment, as Mar-Vell taps into previously unknown energies and concepts to become, as Starlin puts it, “cosmically aware.” Mar-Vell is made attuned to the universe itself–sort of like if Daredevil’s radar senses were expanded beyond the planets and stars. 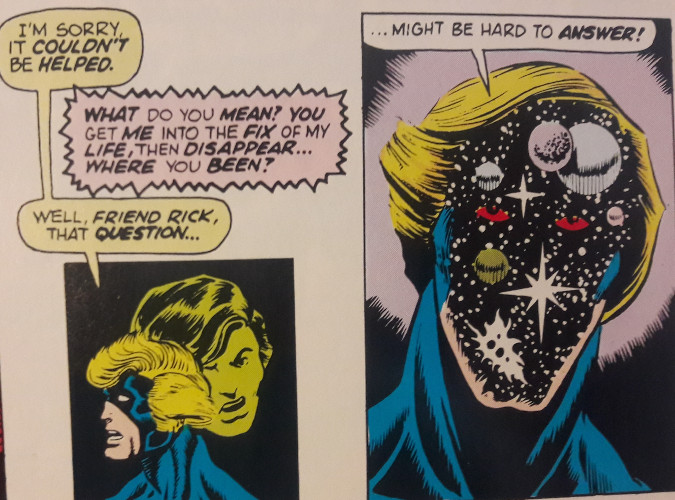 The transformation is intended to make Mar-Vell more than just an empowered Kree warrior, to take him and make him a genuine protector who does more than battle aliens with his fists and laser fingers. The concept feels intentionally tongue-in-cheek, with Starlin taking a previously B-rated hero and suddenly bulking his importance to the cosmic scope of the Marvel Universe while also portraying him in a manner far different than other heroes at the time. Suddenly, this drifting Kree hero is integral to keeping the universe itself safe from the machinations of a megalomaniac like Thanos; suddenly, he has clout. A sequence where Mar-Vell fights facsimiles of old foes–a recurring theme in these issues–as well as a twisted version of himself poignantly, somewhat subtly completes the transformation. Captain Mar-Vell is dead; long live Captain Marvel.

Starlin isn’t quite at his writing best in these issues, particularly as he handles cosmic matters. Though Starlin doesn’t blatantly throw themes of power in your face, sequences such as where Mar-Vell faces false foes are backed by weighty verbiage which more or less spell out Starlin’s intentions. The writer also serves as artist, gaining complete mastery over his narrative. Where plotting and art collide, he works wonders, sketching out detailed, if not downright trippy, sequences which would be equally at home in a Doctor Strange issue. Yet words occasionally pile up and add to the visual cacophony rather than rightfully support it. He never tells you “Hey, I’m making a brand-new Captain Marvel out of the character nobody really likes,” but having characters discuss removing “Captain Marvel the warrior” and replacing him with the more cosmically attuned Mar-Vell sometimes feel a little heavy-handed. 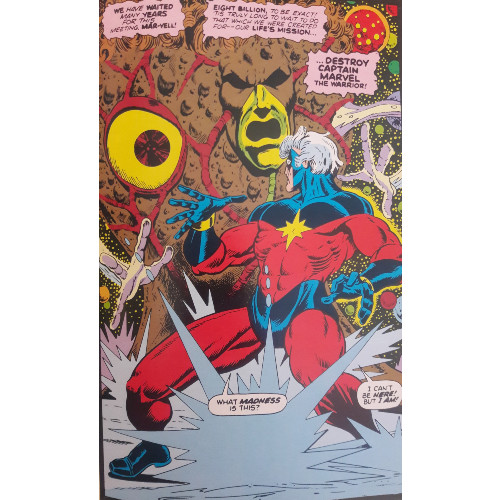 In the end, however, the character transformation works out just fine throughout the following issues. Mar-Vell is set up, uniquely, as an antithesis to Thanos; while Mar-Vell gains awareness of the universe, Thanos seeks out the Cosmic Cube, which he intends on using to gain instant godhood over the galaxy. Mar-Vell’s diligence and vigilance are saddled against Thanos’ ruthlessness and selfishness; sequences where Mar-Vell races to his friends’ rescue (including Rick Jones and his fellow Avengers) are balanced out with scenes of Thanos murdering underperforming minions. Here, Starlin ends up being subtler–his Thanos is certainly downright evil, stopping at nothing to give Death his preferred dowry, but even that intention is kept at bay for as long as possible.

The Death reveal is actually worth noting, as Starlin takes his time to introduce her to the narrative. A shadowy, cloaked spook trails Thanos, popping up whenever he does. It’s only late in the story where Thanos reveals her identity and his love for her. This, too, feels like an inversion of stereotypical superhero fare–Thanos waits until almost the last possible second to make his intentions known, in a moment so devoid of fanfare, its importance feels minimal the moment it occurs. There’s no grand splash page as he reveals her identity, no bolded or dramatic lettering. A few panels build up to Thanos draping back the hood. That’s all. 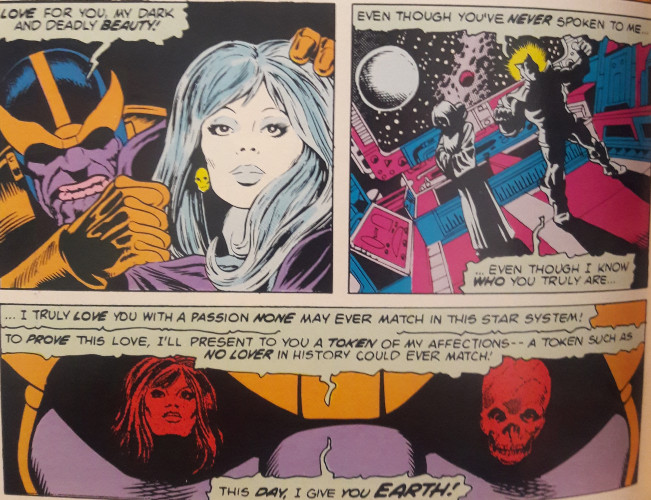 This, and other sequences, makes me continually wonder about Starlin’s ultimate goal when writing these cosmic narratives leading up to Infinity Gauntlet. Looking at these stories, published about 18 years prior to the Gauntlet miniseries, I have a hard time saying with certainty that Starlin had an endgame (sorry) in mind when he initially created Thanos or Drax. That is to say, I seriously doubt Starlin specifically had the whole “have Thanos steal six gems and affix them to his gauntlet” plot…but more generally? Was Thanos intended on being a one-shot villain, his glory fading like his foiled plan to wipe out the stars for Death? Or was he always planned to return, to strive again and again to wipe the universe clean of life, much like the Green Goblin keeps coming for Spider-Man or the Red Skull keeps trying to destroy Captain America?

These trains of thought make reading this entire volume an interesting exercise. Part of each issue’s impact, reading them in 2022, is how these characters were shaped in future stories, such as Thanos in Infinity Gauntlet or Mar-Vell in "The Death of Captain Marvel." I think it’s almost a guarantee that this specific volume is titled “The Life of Captain Marvel” to capitalize on the "Death of…" graphic novel, toying with concepts of “Life” and “Death” in the titles. The volume even ends with an issue depicting a fight between Mar-Vell and supervillain Nitro, where the hero is exposed to gas which later develops into the cancer which kills him. Again, I don’t know if Starlin intended to kill Mar-Vell when he began writing the Captain’s cosmic adventures, but it’s by peering at these stories retrospectively that you get the full impact. Not that Starlin’s narrative is lacking on its own–his Thanos is devious, his artwork is spectacular–but there’s definitely an element of recollection which enables these stories to stand out a bit more than if Mar-Vell had lived to the present day. 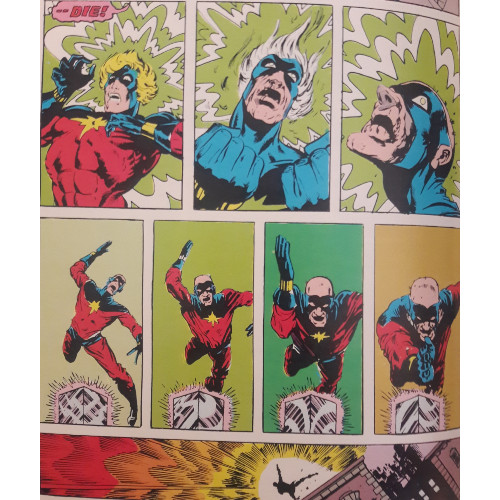 Starlin’s work on the life of Mar-Vell of the Kree isn’t perfect, but it appears a far cry better than preceding creators on the title. I won’t necessarily say his run ranks with other 70s narratives such as Chris Claremont’s early X-Men adventures or Don McGregor’s “Panther’s Rage” epic, nor is it as pithy as later work on Warlock or The Infinity Gauntlet. But what it occasionally lacks in finesse it makes up for in ambition–perhaps Starlin had not yet conceived of the cosmic-spanning scope of later stories, but here, seeds are planted, intentionally or not, which sharpens and deepens the focus of Starlin’s later narratives as he breathes life into the far reaches of the Marvel Universe. He takes a previously-frustrating hero and gives him focus, turning a warrior into a golden guardian of the galaxy; he introduces a domineering world conqueror and slowly reveals his intentions and madness. Perhaps stronger than some of the plot elements are the concepts hidden behind the words–-the Marvel Cosmos was perhaps not born here, but through Starlin, it began its rise to prominence…and all starting with the life of a hero best known for his death.