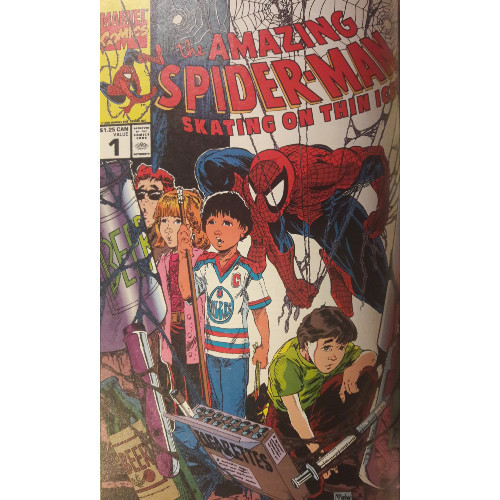 I can’t believe I’m writing about this.

I don’t mean that in a “Holy Thor, I get the awesome chance to review this awesome comic book!” way. I mean, “Why the heck did I pick this one up?” I can’t tell you my thinking when I grabbed the volume containing this two-part tale. I just thought, Eh, what the heck, might be worth a laugh or two. If anything, it’ll be a unique writing experience for me and a (hopefully) unique reading experience for anyone who meanders over to this post.

What I’ve got for you today is a Public Service Announcement. And I mean that literally. The two comics I’m discussing in this post are PSAs.

Spidey’s no stranger to tackling pressing issues in his comics. Stan Lee famously published a three-part Amazing Spider-Man story about the dangers of drug addiction without the Comics Code Authority’s seal of approval, a watershed moment in comics history that kickstarted a revision of the Comics Code itself. Various other PSAs starring our Web-Headed Wonder have addressed topics such as dental hygiene, teaching, engineering, and literacy. A few years back, Marvel (seemingly) intended to take a whole ton of these and publish them in a volume over 400 pages long. Unfortunately(?), most of the included material was axed, leaving a much thinner volume collecting the aforementioned Amazing Spider-Man issues and PSAs dealing with substance abuse specifically.

Yeah, I bought the volume, slimmed down proportions and all.

Why the heck did I pick this one up? 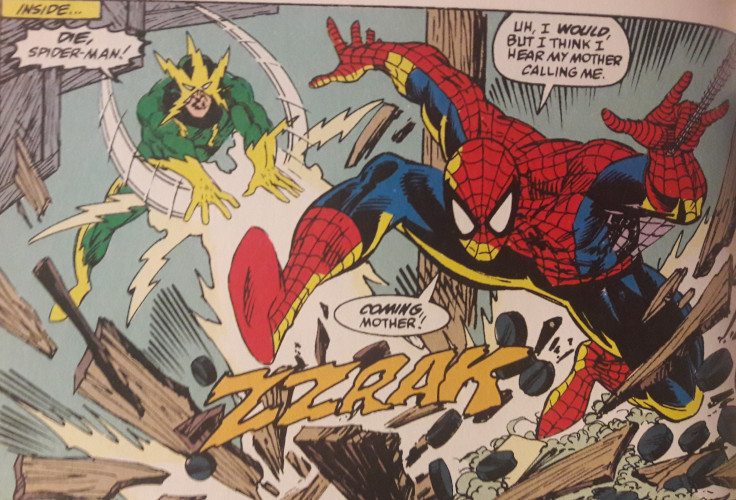 Canada must have had an issue with teens taking drugs, because this two-part tale sees Spidey travel to our northern neighbors, where he tries to put the kibosh on some kids looking to ingest illegal substances. Surprisingly, these are only the first two of a five-issue story, with Spidey galavanting all over Canada to stop one PSA-related threat after another. The volume I own covers only the first two issues, as they’re the only ones which deal with drug addictions, but part of me is curious about the other three. Do they continue the story? Is there a coherent narrative woven through all five issues in this “series”? Granted, I’m not curious to buy the other issues, mind you (which would have been included in this volume, if Marvel’s original plans had gone through), just curious enough to speculate.

The fact that any kind of coherent plot at all exists in these issues is, in a word, stupefying. For months, I’ve had these two issues classified as one-shots, standalone tales where Spidey takes on some kind of drug-related problem. I fully intended to read them as one-shots and to review them as one-shots, giving each their own post (I’m not hurting for material, I swear). But thank Odin for Dwayne McDuffie’s decision to weave these together. I’m not sure I could write two posts on this. 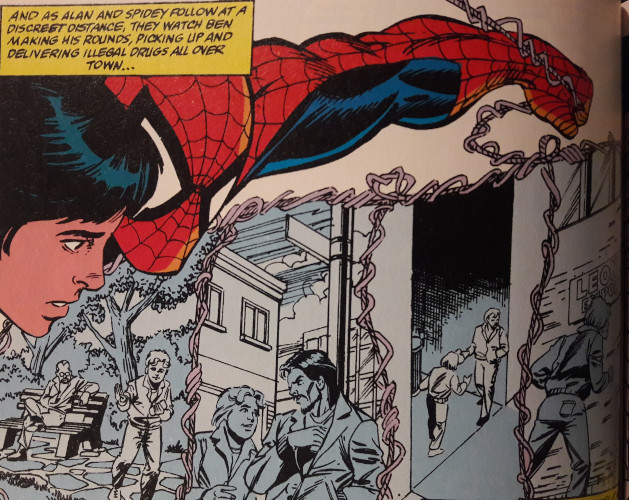 I’ve been browbeating these issues through the whole post now, which may seem unfair because I haven’t even touched on much of the story at all. And I don’t necessarily have a problem with the narrative...I just never expected to read anything like this, let alone write about it, and my brain is sort of sifting through the notion and making sense of things as I verbally vomit my vain ventings verbatim.

The late, great Dwayne McDuffie provides the script for both issues, with Alex Saviuk (who illustrated a graphic novel we examined as well as a few of the “Cosmic Spider-Man” chapters) and Herb Trimpe (who penciled a couple chapters of the long-running "Alien Costume Saga") provide pencils. I’m not hugely familiar with either artist, but I was sort of surprised that two guys whose names I at least recognize provided the art for these one-off stories. I guess I figured Marvel would pick up a couple of lower tier randoms. Saviuk and Trimpe do admirable work here, given the material they’re working with, their art evoking the feel of narratives from earlier periods of history, not necessarily the 90s. Not a bad touch, overall. 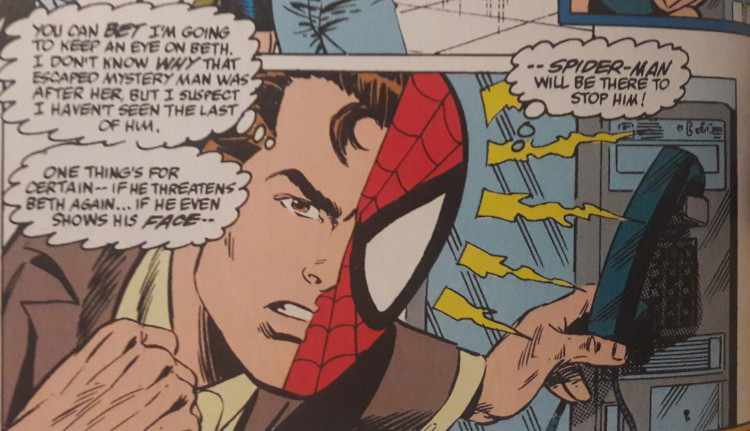 McDuffie’s narrative isn’t terrible by any means, and like I mentioned earlier, I was genuinely surprised that he wrote something as simple as an anti-substance PSA as a running story. He could’ve just thrown together a couple simple plots--Spidey helps a kid addicted to painkillers or meth or something--and typed out a couple of dialogue bubbles and word balloons, but no. The two chapters included in the volume depict Spidey traveling to Canada on a Daily Bugle assignment that quickly becomes something more important. The focus in each issue is the kids Spidey interacts with, as a couple of youths get involved in poor decision-making and start going down a troubled road. Sure, the frame tale seems a little weak, more of an “excuse” than anything else just to get Spidey up to Canada, but McDuffie at least puts thought and effort into his scripts in figuring out how to move from Point A to Point B.

And movement there is. Part of McDuffie’s plot centers on a mysterious villain who can change appearance at will, later revealed as classic Spider-Man enemy the Chameleon. McDuffie sets up the Chameleon’s involvement in the first issue, teaming him up with Electro, before surprising the reader with the villain’s true identity in the next issue. The villain’s motivations take a hit between issues--McDuffie never explains how the shape-shifter’s plot involving drugs in the first issue reconciles with his scheme to steal a young science prodigy’s experiment in the second--but again, McDuffie works to make a connection between his issues. And, heck, maybe the plot deepens during the issues I just don’t own. 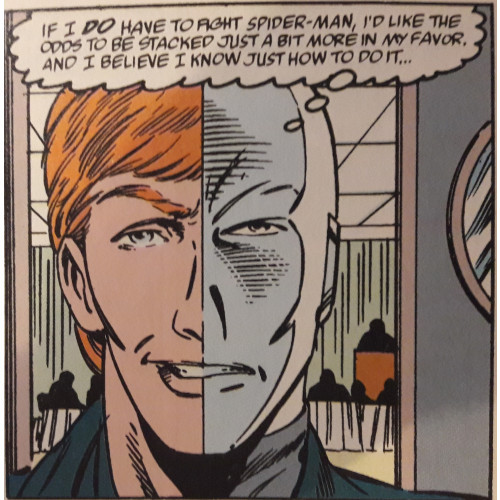 Opening these issues, I expected to be hammered unceasingly with references to why drugs were bad in a ham-fisted attempt to shove rhetoric down the throats of youthful readers, much like the drugs the creators are warning kiddos to avoid. To my astonishment, painfully unsubtle rhetoric is largely dismissed for less tacky characterization. McDuffie gets his dialogue in to serve as verbal warnings, but he deftly avoids cliches and buzzwords. You don’t have Spider-Man just wag his finger at a kid and tell him “Bad boy” or ask “Don’tcha know drugs are bad for you?” He crafts situations for these featured teens to fall into and, through their own culpability, understand the weight of their actions.

McDuffie’s drug philosophy, it seems, is based on choice. “I know you’ve been thinking about using drugs,” Spidey says to one troubled kid. “That’s a decision only you can make, but I want to help you make an informed decision.” He later tells a kid he knows they’ll make “the right choice,” and that’s about as preachy as McDuffie gets. For a second, I wondered if McDuffie’s decision to tell kids that using drugs is up to them felt like a cop-out, like he shrugged his shoulders and went, “Who’s to stay I’m an authority on drugs? Why not let the kids decide?” But I think McDuffie went into the story understanding the difference between drug use and drug abuse. Yeah, some people are gonna drink, some people are gonna smoke, but when you become so dependent on those substances, then you’ve got a problem. He doesn’t condone the practice of taking drugs, but he understands a person’s choice in the matter. It’s a fine line to walk--on the one hand, his philosophy may not feel sharp or harsh enough to some readers, but on the other, wouldn’t outright condemning drug use at every opportunity get repetitive, boring, demanding? “We get it, we get it,” you’d find yourself screaming at the page. McDuffie ends up being subtle enough to effortlessly integrate his message into the narrative without becoming a bludgeoning hammer, but not too subtle that anyone reading the issues would miss his point. 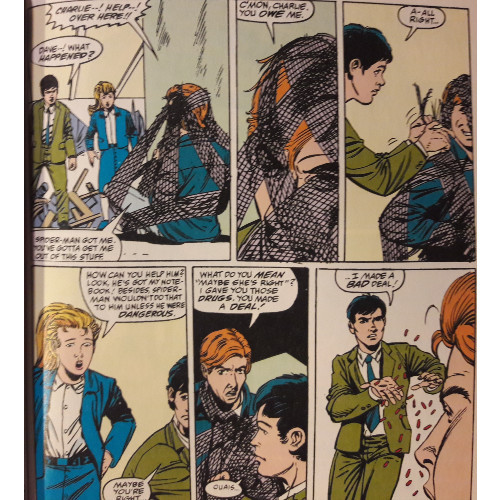 “When does a PSA not feel like a PSA?” When it’s a story that meshes narrative with message. I wrote in a Geeks Under Grace review on Mark Millar's "Ultimates" a few months back that messages in stories fail to work when the writers hit their readers over the head, reminding them in no uncertain or creative terms that “This is the truth, and this is the way it’s gonna be!” McDuffie doesn’t do that. He offers he interpretation, allowing us to see his characters and draw our own conclusions without hitting us repeatedly with “Drugs are bad! Drugs are bad!” His story certainly does take a few hits in the process--the Chameleon’s motivations are never fully explained, and I can give Mr. McDuffie a big ole deus ex machina for letting Peter travel on assignment to Canada, where he interacts with kids who just so happen to have drugs from a shipment Peter battled Electro over in New York. Nevertheless, these issues aren’t nearly as awful as I expected them to be. McDuffie handles a delicate situation nicely, putting focus on the people working through a problem rather than just highlighting the problem itself.