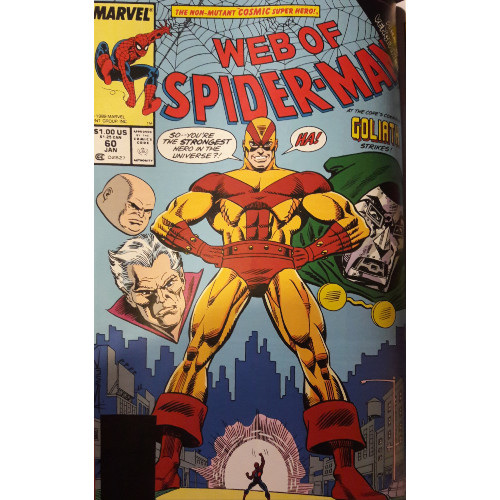 You all know the story of David and Goliath, right? Little boy armed with only a sling and his faith against a powerful giant. It’s been interpreted several ways (including comics), but the tale always focuses on the prime theme of an underdog routing a foe much larger than himself. The little guy beats the big guy.

Our issue opens with a similar conflict, as smaller Spidey takes on a large-and-in-charge villain named--surprise!--Goliath. You’d think the fight would go the way of the Old Testament narrative, with the little man in the spider-suit relying on his willpower to take down his much larger foe. Maybe he’d even make a slingshot from webbing in a bit of poetic license.

That’d be cool. Some nice parallels between this issue and its biblical source material. Problem is, David was never imbued with cosmic strength and laser fingers.

“The Harder They Fall” 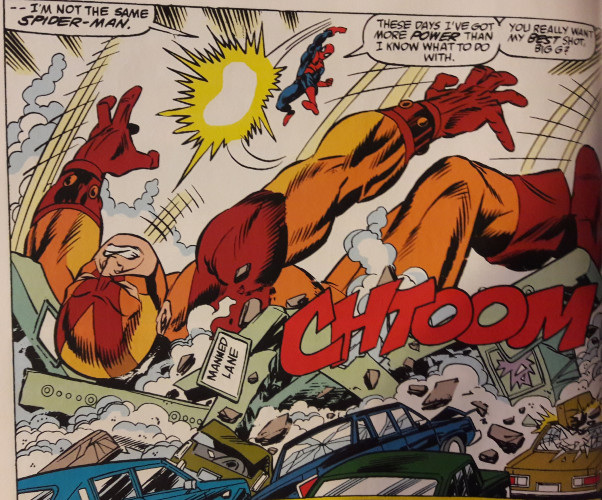 Welcome to the 90s! After a little over 80 posts (appropriately), we’ve finally escaped the 1980s and entered the world of the last pre-21st century decade. The 90s are, for a bevy of reasons, notorious, tumultuous years amongst comic book fans, Spider-Man readers specifically. But we’ll court controversy the deeper we get into the decade. For now, we’re concerned with the latest development in Spidey’s life: cosmically-charged superpowers!

I’ve complained, repeatedly, about the oftentimes repetitive nature of the last handful of stories we’ve examined. Usually, I’ve commented on how the enforced “Acts of Vengeance” crossover crowds out possible growth and narrative development while Spidey’s been working through his new abilities. Fortunately, Gerry Conway looks to right a sinking ship in this issue, crafting the strongest chapter to date in this ongoing mish-mash of misadventures...not that the first few pages are much indication. 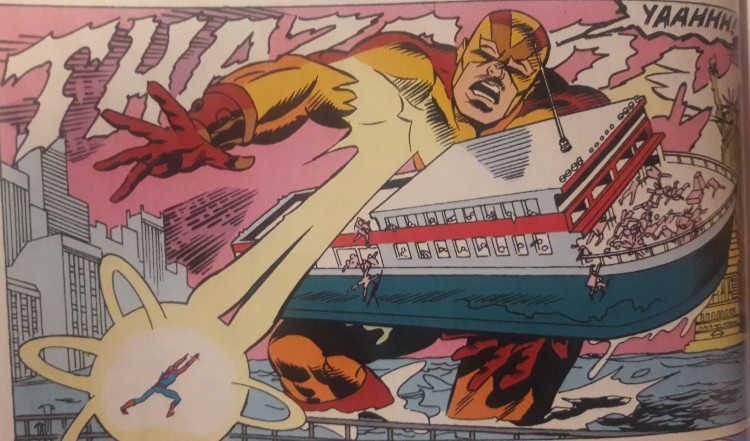 Conway introduces a new philosophical dilemma into this saga. Up until now, Spidey’s been growing a tad concerned about his new abilities and the uncanny power he’s been gifted (or cursed with, depending on your view). He caused a cruise ship to nearly sink during a battle with Magneto; he’s inwardly worried about the abilities he wields and the subsequent increase in his own responsibilities. Mary Jane has even briefly approached him about discussing Peter’s new powers, worried about where her husband has found himself.

This issue proceeds with the notion of responsibility in a different manner. Conway, none too subtly, designs a scene where Peter approaches Aunt May and, in a rather roundabout manner, discusses with her his newfound abilities. Conway’s intentions are stark, even if Peter has to beat around a few of May’s rose bushes in order to keep his favorite relative in the dark. No sense leaking to dear old May that he’s really asking about how best to utilize his recently acquired cosmic laser fingers and flight, right?

Conway’s intentions become clearer as the issue goes on, but the brief conversation between May and Peter feels jolting. “You haven’t brought me a problem since you were a little boy,” May says inquisitively, almost wondering what could be so wrong that Peter would have to seek her counsel. To this, I say “Phooey” and maybe even lob in a “Hogwash.” I fail to see how Peter has never approached Aunt May with a problem since he was a kid; the statement, I believe, is Conway’s way of indicating how self-reliant and responsible Peter has become, almost as if he’s never needed May’s help. Maybe we’re supposed to interpret the phrase less literally? Perhaps I’m supposed to see May’s statement as hyperbole? As if, it’s been so long since Peter last approached her with a problem that it only feels like he hasn’t done so since childhood? 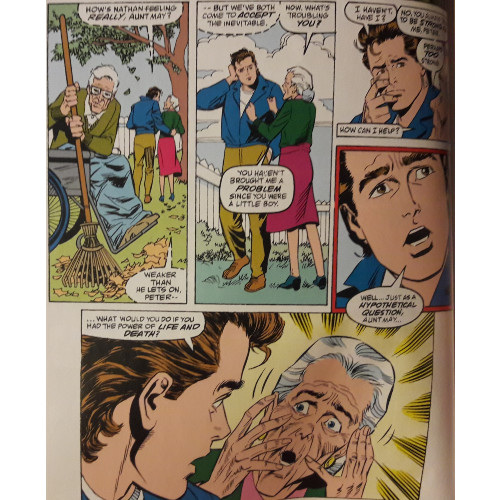 Either way, I still say “Phooey.”

Peter’s question, in itself, is also rather awkwardly worded. “Just a hypothetical question, Aunt May,” he begins, before lowering the boom: “What would you do if you had the power of life and death?” Peter’s nonchalance is goofy to the point of hilarity. “Hey, Aunt May, just wondering...if you had godlike abilities and could kill somebody by looking at them wrong, what would you do? What’s that? Why so awkwardly worded? Just asking for a friend is all.” The question is bizarre; Conway lays his philosophizing on way too thick, removing any subtlety from the question. You’d think Peter would approach a little more calmly (particularly, as he knows May’s fiancé Nathan Lubensky is dying). But nope. He straight out asks his Aunt May what she’d do if she were God.

I get Conway’s sentiment, and the rest of the issue proves he’s got the right idea. May’s answer is thoughtful, complemented by a well-worded metaphor that almost disregards Peter’s initial question...but not quite. Her answer isn’t outright or direct, yet it encompasses the fear he’s juggling. May doesn’t discuss what she would do specifically, primarily because such a question seems impossible to answer. Yet, she admits, such power is not worthy to be wielded by one human. It’s the fragility of life which gives living its beauty. 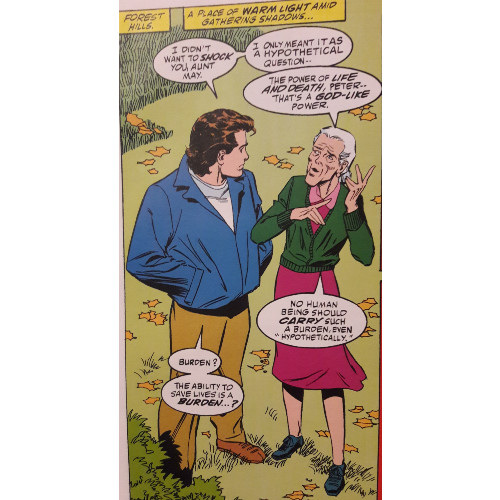 Conway, cleverly, incorporates this issue’s “flavor of the month” villain into the argument, creating a compelling object lesson. Goliath (the supervillain formerly known as Power Man, not to be confused with Luke Cage) faces Spidey not once, but twice. Conway gets back on his philosophical train with the second skirmish, but I’d like to take a minute and point out the fact we even get a second skirmish. The first battle, opening the issue, is surprisingly entertaining and frantic, a dynamite method of starting the issue. Conway skews the paint-by-numbers method of superhero/supervillain fights we’ve been given the last handful of issues. Goliath’s return is driven by vengeance, and the giant-sized baddie acts like he owes Spidey one after his dismal defeat during their first fight.

Yet at the heart of this revenge-fueled conflict is Aunt May’s philosophy. Conway brings her words to light in startling fashion as Spidey, pouring on the juice to keep Goliath at bay, encounters the very notions she warns against. Spidey’s inquiry is turned back upon himself--what would he do, or what should he do, with such power? Weirdly worded as Peter’s hypothetical question is to May, the nuances are very real as Spidey battles Goliath. This is no longer a matter of opinion or perspective. It’s go-time, forcing Spidey into a tricky pickle as he has to choose between Goliath’s life and the protective powers he wields. For a few pages, Conway’s earlier discussion suddenly makes sense, turning the May/Peter conversion into something more than a time-killer or Conway’s strange attempt at poignancy. 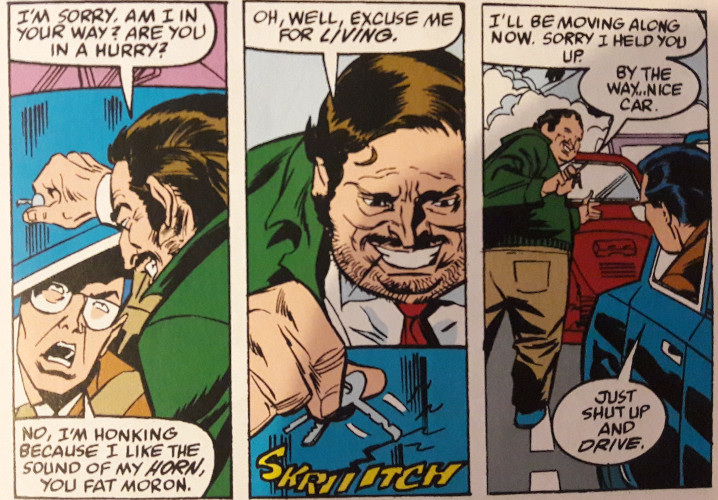 Conway also makes sure to give supporting cast members who aren’t related to Peter ample page space between all the cosmically-powered thrashings. Nick Katzenberg, the sleazy reporter whose life was recently saved by Spidey, turns his scumbag-o-meter up to 11. We’ve seen other schlocky news junkies on “screen” before, but few match up to Katzenberg’s level of “blerg.” If you weren’t already mad at the guy for snapping photos of Robbie at his trial, then maybe him keying someone’s car or just expecting his new boss to give him a raise for some photos will set your blood to “boiling.” The guy receives a bit of an arc later which intends to make the reader perhaps a bit more sympathetic with him (we’ll see about that when we reach that point); for now, Nick’s a loser, with no redeemable qualities, outside of maybe his ability to take good photos.

Nick’s boss, Thomas Fireheart, gets a scene which speaks to his character in an interesting fashion. As we’ve discussed already, Fireheart is the Puma, and if there’s anything we’ve learned about the Puma, it’s that his form of “help” is often more of a hindrance than warranted. He recently purchased the Daily Bugle from J. Jonah Jameson, turning the publisher’s “anti-Spidey crusade” completely on its head. Conway, wonderfully, has the wherewithal to see this is more harmful than its worth, bringing Spidey into brief verbal conflict with the Bugle’s new owner. Fireheart’s sense of honor towards Spidey brushes against Spidey’s more humble nature; being bragged on is almost as bad as being outright hated, in our hero’s eyes, representing the other extreme in an emotional spectrum. I don’t believe we’ll see the end of this arc, and considering the currents of history, I don’t think it’s a spoiler to say that Jameson eventually gets the Bugle back. But for now, Conway helps weave an entertaining perspective to answer the question of what happens (or could happen) when the Bugle goes all-in on a pro-Spidey campaign. 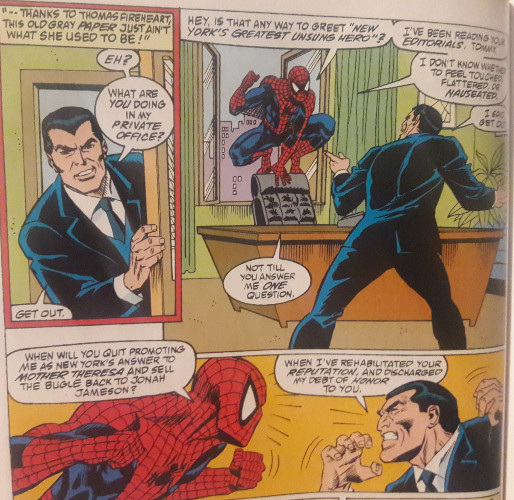 This issue works better than several recent narratives we’ve dissected. I’d like to say this is largely due to Conway’s ability to focus on Spidey’s world and expand elements within rather than without. We’re still dealing with “Cosmic Spider-Man” and “Acts of Vengeance” nuttiness, but to a large degree, those take a back seat for more important character moments. Certain instances don’t work as flawlessly--like the awkward dialogue exchange between May and Peter--but for the most part, this issue dishes up good moments more than negative. These may be the “Acts of You-Know-What,” but it’s Conway who strikes with a vengeance in this issue, bringing back the wonderful wordsmithing I’ve come to appreciate from the classic writer.