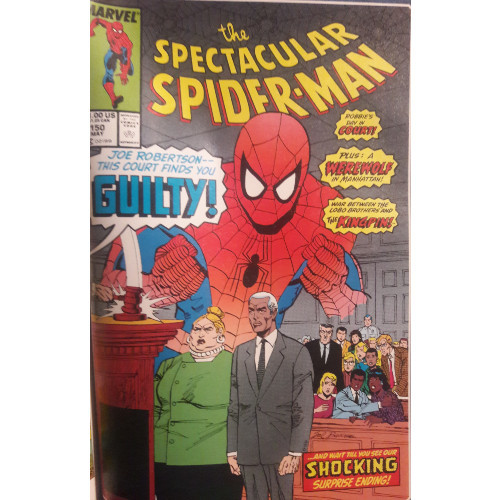 See, Robbie once had a, uh, “friend” name of Lonnie Lincoln. Lonnie’s an albino, and a former high school bully, and a current hitman for the mob. Robbie was tormented by him in their youth and, as a budding reporter, ran afoul of Lonnie’s threatening ways while investigating a story. Lonnie calls himself “Tombstone,” cause that’s what people are gonna be gathering around once he’s done with you, see? Don’t want to cross his path, see? Gonna get you dead.

But Robbie, y’know, this guy’s driven by this moral compass or whatever. So when Tombstone comes to town, Robbie decides to do something about it this time around. But instead of going to the police, Robbie decides to face Lonnie man-to-man. He proceeds to get his back nearly broken by a vicious bear hug. Once he’s done recuperating, Robbie’s arrested for not reporting to the authorities some original murders he’d seen Tombstone commit, because Tombstone is, y’know, a hitman for the mob.

Our stalwart reporter, hampered only slightly nowadays by his injuries, thank goodness, is now at the mercy of the court. By the title, you’ve probably already guessed this isn’t gonna end well.

Why do these anniversary Spectacular Spider-Man issues always gotta suck for somebody?

Back in PPSSM #100, Peter and the Black Cat broke each other’s hearts. In this issue, Robbie faces a guilty charge and sentenced to three years in prison. I should mention that prior issues of this series have, at times, switched over to this courtroom drama and played it out piece by piece. Thus, a judge pounding his gavel and declaring our good friend “Guilty!” on the first page of the issue feels by no means too swift. Conway has already played with the notion of Robbie’s trial, meaning this seemingly climactic moment is a huge narrative punch to the gut for anyone opening this issue.

Conway does the best he can to balance the Robbie story arc with a few other narratives, and since I think those are weaker, I’ll touch on those first. As I’ve discussed briefly in a past post or two, Conway’s building up a mystery of sorts. A monster is ambushing and murdering the Kingpin’s men, only the Kingpin’s men, à la the Holiday murders in Batman: The Long Halloween. And while this murderer doesn’t kill on particular dates, he leaves savage calling cards: torn up bodies and bloodstained messages, written specifically for Fisk. 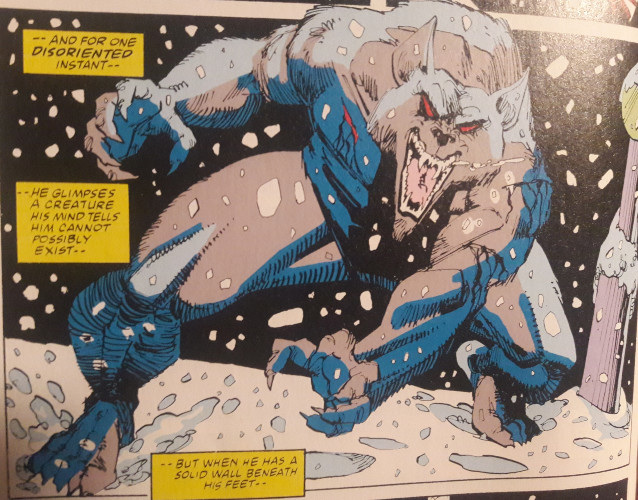 Conway utilizes this as a mystery, and though the culprit (or, spoiler, culprits) is somewhat obvious, he weaves it in seamlessly. The segments of the issue which switch to this narrative--including one standout terrifying image courtesy of Buscema--don’t feel at odds with the unfolding courtroom drama. You’d think that “giant killer monster” wouldn’t balance well with “gangland murder trial,” but Conway somehow makes the two ideas work in tandem. Conway also dishes out the revelation that this monster may not be a monster after all--at least, not in the traditional “mindless, rampaging, slavering beast” definition of a monster--which is another well-handed moment. Readers who may have thought this shaggy creature was just a creature may have been surprised to discover more hides beneath the monster’s fur pelt. It’s well-handled by Conway and Buscema both.

I think the most disappointing aspect to this story has nothing to do with the issue itself, nor with the preceding issues which featured other chapters of these arcs. Both the Robbie/Tombstone and monster arcs aren’t finished by time the volume I own which collects these stories ends. We’re left with a “cliffhanger” of sorts to both stories, small revelations which would certainly keep readers wanting to know what happens next. Looking through these issues via a database, I discovered that both plots are continued in subsequent issues, leaving me very disappointed that this volume failed to include the three or four more issues which would have properly resolved these story arcs. I know, via my history, that Robbie doesn’t stay in jail forever, but it would have been a treat to read about how he obtained his freedom. 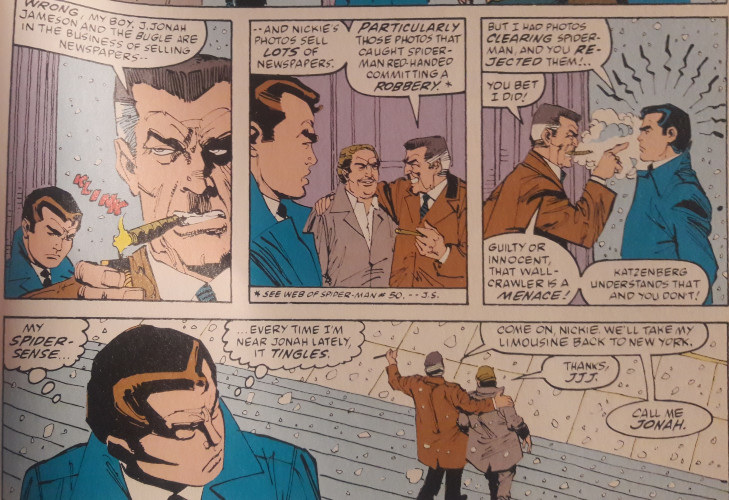 Standout in this issue in Conway’s decision to include some incredibly awkward J. Jonah Jameson characterization. Though it may be a memorable instance, I don't necessarily applaud it. When Daily Bugle photographer and all-around scummy shyster Nick Katzenberg begins taking snaps of Robbie, Peter Parker steps in and stops him, not allowing journalistic instincts get in the way of moral integrity. The issue is brought up with JJJ, the publisher brushing it off without so much as asking a question...because the photographer in question took some incriminating photos of Spider-Man recently. I understand Conway’s desire to continue framing JJJ’s personality around his hatred of Spidey--despite the fact they recently fought off several demons together--but letting Jonah’s grudge get in the way of propriety feels wrong. Conway had a chance to create a very human look for the publisher and whiffed. It's one thing to let JJJ stew in his nonsensical grudge towards Spider-Man; it's another for him to praise a photographer for taking exceptional photos of Jonah's soon-to-be-incarcerated best friend. Does Jonah's attitude mesh with the rest of his personality? Sorta. But since we're talking about Robbie Robertson, perhaps the man Jonah's trusts and respects most in the whole world, Conway's characterization feels like a slap to the face.

Elsewhere, fortunately, Conway provides some other nicely human characters. A powerful scene sees supporting cast members, including Ben Urich, MJ, Lance Bannon, and Randy Robertson’s wife Amanda, congregating and supporting Robbie’s wife, even as she eases into the reality of her husband’s situation. Conway depicts this entire scene fantastically well, assisted by Buscema’s artwork. It’s only a handful of panels across two pages, but Conway and Buscema craft the sense of loss wonderfully. There’s real pain in Martha Robertson as she mourns the temporary loss of her husband, a typically steady woman shaken to her knees. 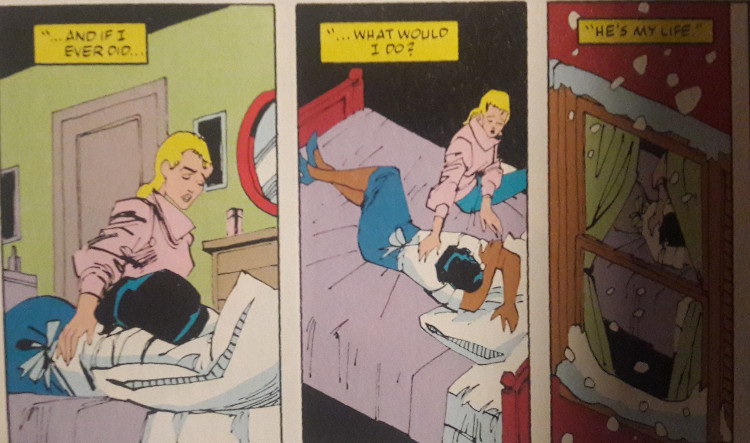 I wish I was able to clump this issue into a group of issues covering the same story arc, or “arcs,” if we’re counting both the monster-targeting-Kingpin’s-men narrative and the Robbie Robertson plot. I really do wish this volume had collected the few issues after this one, giving the volume a sense of finality rather than the cliffhanger in ends on. I don’t own those issues, nor am I inclined to pick them up at the moment. My only potential saving grace is that this volume produces a sequel collecting the remaining issues. A numeral “1” graces this volume’s spine, perhaps indicating a second volume in production? On the other, less encouraging hand, this volume was produced back in 2016. After four/five years, Marvel may find it ridiculous to publish a second volume containing the rest of the arc.

Disappointing as it is having the story dangle, this single issue itself is not a terrible representation of the Conway/Buscema partnership we’ve seen so far. When they get in on the human elements, they work frightfully well together. And their ability to blend the human aspect with the crime and horror elements make for a story I was really hoping I’d be able to finish. Sadly, much like Robbie Robertson, I feel condemned to a prison of sorts where I am denied the freedom of finishing this story arc, crushed beneath the weight of an editorial Tombstone’s decision-making.