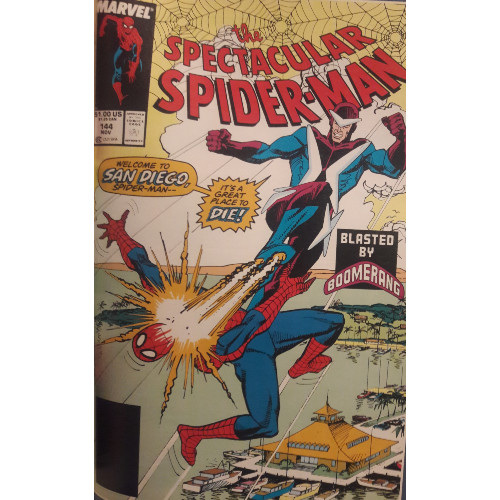 Tombstone came to town, folding Robbie Robertson in half like a lawn chair and almost crippling the man for life. Spidey proceeded to beat the ever-lovin’ daylights out of the white-washed assassin, avenging his good friend and sending the killer on a wishful-but-never-gonna-happen-one-way trip to Ryker’s Lewisburg Federal Penitentiary. We’ll circle back there eventually.

Speaking of circling back, our next two-issue arc focuses on a Spidey villain who’d love to rank himself with the upper echelons of evil: Boomerang (I know...that guy, right?). Though never a major player in the world of villainy, Boomerang’s stuck around for a couple of decades at this point, primarily as a gag character. He just never does anything right. The character received a resurgence in popularity following Nick Spencer’s Superior Foes of Spider-Man series, and Boomerang currently plays a minor role in Spencer’s run on ASM.

But two decades prior to all this, Boomerang was a different guy, a hit man from down under, mate. No squad, no humor. Just an irritating lunkhead with a goofy costume and plenty of Australian frisbees. 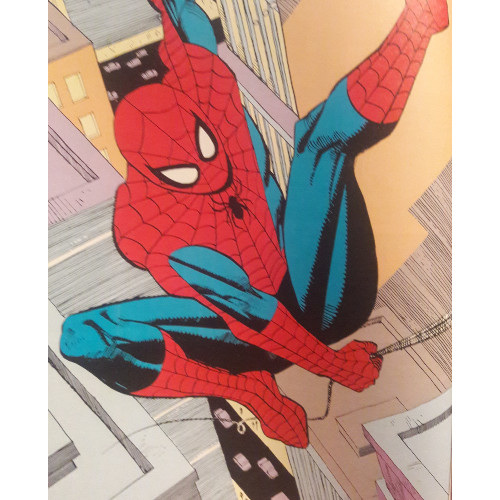 Conway introduces his story with an interestingly unique take on Peter Parker: book promo circuit rider. After recently learning that J. Jonah Jameson made a deal with a company to publish a collection of Peter’s Spidey photos called Webs, Peter’s making the rounds, getting his name out there. “It’s been a longer summer,” he tells one talk show host, and you can tell he feels like he’s getting dragged around.

Conway’s take on Peter is different and engaging; you don’t often see the wannabe scientist/photo expert in front of cameras, especially as the lighter side of his personality comes into play. This is new ground for Peter to tread, and even if Conway devotes only a short part of the story to Peter’s guest appearance, the effort is appreciated. It’s interesting to see Peter in an uncomfortable, almost vulnerable position like this. Peter handles himself well enough, but you still get the feeling like he’d rather slink away and crawl under a web. 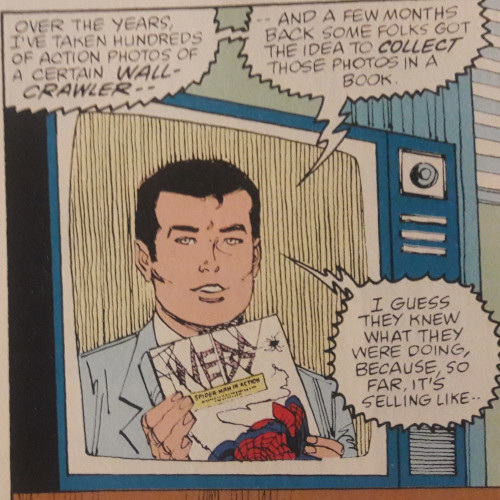 Yet Boomerang becomes the real star of the show during these issues. Again, he’s not quite the loveable goofball that Spencer eventually transforms him into, but even here, you can see and hopefully appreciate the reasons why Spencer would latch onto such a random character. Why would Spencer select Boomerang over other “has beens” or “losers” like the Spot, Grizzly, Kangaroo, or Hypno Hustler?

Conway, in crafting Boomerang’s “return” seems to hit on two aspects of the villain’s personality. First, his undeniable hatred for Spider-Man. Funny as it sounds out loud, Boomerang pontificates his enmity towards the Web-Head at every opportunity he gets. Conway finds humor in this notion, as Boomerang isn’t nearly the kind of menace you’d find among Spidey’s regular rogues gallery, the A-list type of villain like Doc Ock or the Green Goblin, who have battled the hero for years and built up a list of miseries against the Wall-Crawler. Boomerang’s dogmatic portrayal of his relationship with Spidey feels overblown, and it’s this mythic view of himself and those around him that works so well in Spencer’s series. 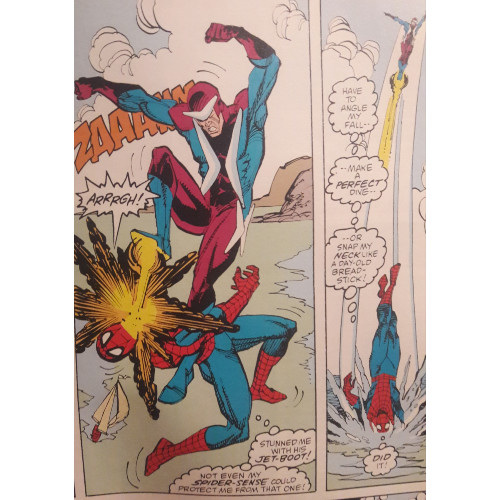 Second, Boomerang’s assured ability to screw up no matter how hard he tries makes Conway’s prose that much more amusing. The entire time, Boomerang acts like this master planner, overjoyed that his fabled rivalry with Spidey is, at long last, coming to its inevitable conclusion with the Web-Head’s death! And, of course, he botches it, like always. Again, Conway doesn’t regard Boomerang as the same kind of screw-up as Spencer makes him out to be, but the writer is certainly indicating Boomerang is nothing but a third-stringer with a silly shtick and goofy getup. Boomerang, in all honesty, could be a genuinely dangerous villain if it weren’t for his inflated sense of ego. Conway understands that, offering just a hint of menace that’s ultimately offset by the ‘rang-wielding baddie’s overconfidence.

Our Aussie friend may be the focus of these issues, but Conway manages to write an interesting “whodunit” of sorts while boomerangs zip around and Peter peddles his published pics. A twisty mystery makes up the plot’s main narrative, a sort of nice palete cleanser following Conway’s longer Tombstone arc. This feels wholly like a standalone story, one with very few impacts on any up-and-coming narratives, giving Conway the ability to diverge from grandiose plots and center his gaze on something smaller. 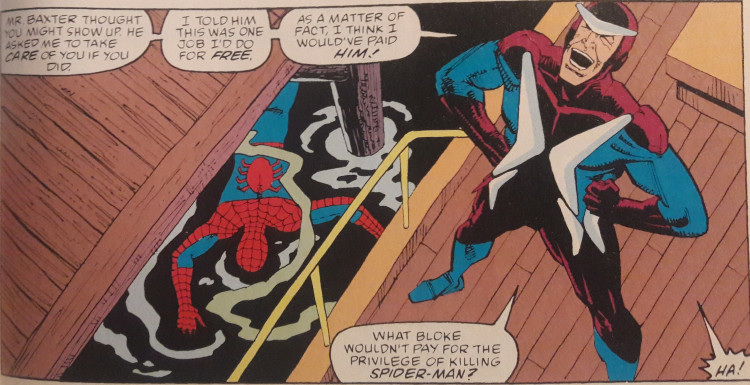 Yet even then, Conway’s sights are still occasionally elsewhere. In bits and pieces, he strings along a new arc for Robbie Robertson, still recovering from his traumatic injuries at Tombstone’s hands. On his first day back at the offices of the Daily Bugle, Robbie finds himself arrested for keeping silent all those years…”obstructing justice,” is how the federal marshals who slap cuffs on him word the charges. Conway takes the knife he’s already stuck in Robbie and twists deeper, piling on the pain for the poor guy. Tension is elevated--just when you think Robbie’s caught a break and said good-bye to all that miserable Tombstone business, it circles right back around to taunt him further.

Lot of that going around, huh?

Conway’s partner-in-crime, Sal Buscema, is also to be commended for his artistic talent. I’ve encountered Buscema quite a bit the last few months of reading--we’ve not only seen his work on a Spidey chapter of the “Alien Costume Saga” and in “Return of the Sin-Eater” but also his contributions with Walt Simonson and Chris Claremont. Heck, we even saw some earlier illustrations of his with Conway on a Man-Wolf story. Buscema, though never one of my favorite artists, has certainly become more a staple in my mind recently. I’m glad to see the various characters and stories he worked on during his time with Marvel. His pencils grace the action sequences of this two-parter, creating a memorable battle royale between Boomerang and Spidey out at sea, a place where both adversaries feel out of their depth.

(yeah, I guess that's a water-related pun? I dunno, I didn't mean it...take it however you want) 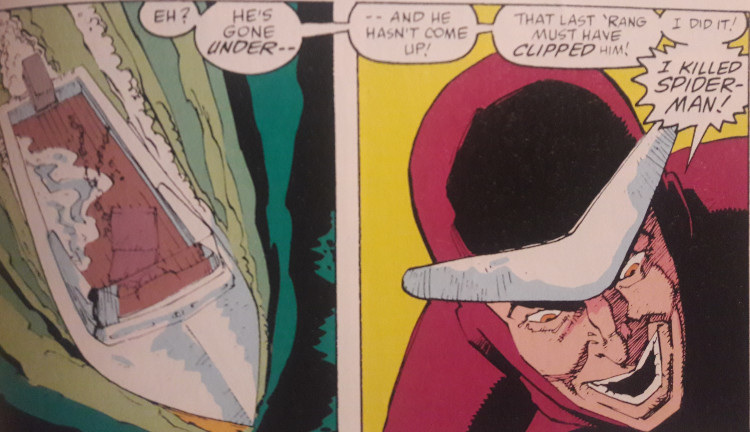 Boomerang’s return to Spidey villaindom is a welcome notion, creating a fun, short arc in the wake of Conway’s grander ideas. Bigger stories will return next time around, but for now, I’ll take this shorter arc and just enjoy it. Conway is certainly seeding ideas in these pages, but I’m glad he found the opportunity to take a bit of a rest and churn out something just a little more fun. Boomerang, though never a big-name Spidey villain, deserves the spotlight he’s given here, especially as one is able to read Conway’s depiction of the character and understand the facets Nick Spencer grabbed hold of and enjoyed while he created his own masterful take on the woebegone villain.