This next chapter in Chris Claremont's run features powerful, character-driven story arcs and a marvelous host of artistic talent 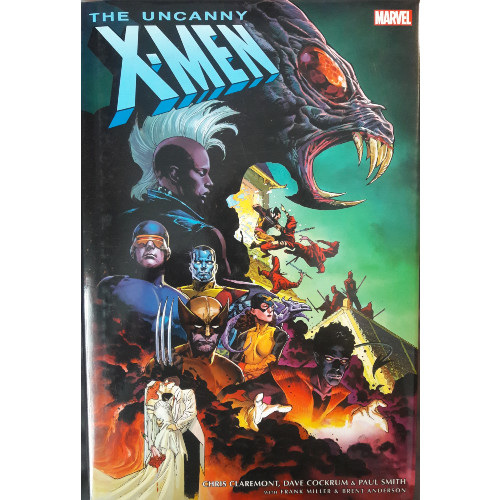 I have, so far, found myself highly entertained by the first two omnibuses collecting Chris Claremont’s run on The Uncanny X-Men. At the time these stories were initially published, Claremont had taken a title that, for a while, merely reprinted older stories and turned it into a powerhouse monthly title for Marvel. If the influx of fan mail regularly praising the book is believed, fans enjoyed it back then as much as I’m enjoying it now.

Over the last two omnibuses, as readers become more comfortable with characters and the heroes themselves grow closer to one another, you get a good look at Claremont’s evolving style and narrative capability. The second omnibus, in particular, showcased how secure the writer became with his characters and plotlines. The long-running “Dark Phoenix Saga” came to a head, culminating in a shocking ending. The grim “Days of Future Past” crafted a dark but beautiful alternate future world, where Claremont upped the genocidal racist stakes that had haunted the team for decades at that point. “Demon” was a wonderful single issue which saw Kitty Pryde, youngest of the X-Men, undergo a baptism of fire as she fought and defeated a monster all alone in the X-Mansion on Christmas Eve. Characters grew, characters died, characters took leave of what was familiar and plunged into new and mysterious territories.

As we enter this third omnibus, you’ll hopefully notice some of those themes popping up in the stories presented here. But I really hope that we all focus on one key aspect Claremont readily introduces and weaves through most of the stories showcased in this massive volume: change through adversity. 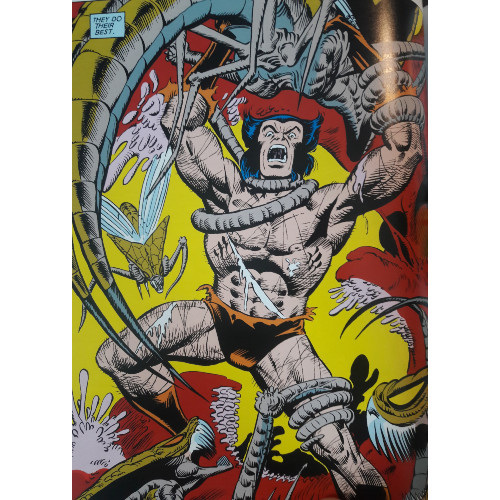 X-Men stories are not what anyone would necessarily call “light-hearted fare.” As I write this, I’m also currently devouring an omnibus collecting Walt Simonson’s run on The Mighty Thor (upon which I hopeth to compose a review anon!), and the tone of those stories is starkly different to Claremont’s work. Rainbow bridges flash across the sky, connecting a colorful Midgard to Simonson’s glowing Valhalla. Even in the darkness of the cosmos, a forge burns crimson, orange sparks flaking off steel as a demon shapes a sword (how’s that for a teaser?). Simonson’s work, artistically and tonally, is far different from what you find in Uncanny X-Men.

Not that the art in these issues isn’t colorful, nor do I mean that the stories are bleak, hopeless, or downright sorrowful. But in this third omnibus, we find Claremont and Co. shifting from frantic, universe-altering adventures to things of a more personal nature at a more human level. X-Men stories have always been marked by some sort of realism--look at the earliest Lee/Kirby tales and their albeit stilted attempts at creating a metaphor for race tensions in 1960s America--but Claremont brings in a much more tangible, emotional level of conflict. Even in the wacky sci-fi adventures he coughs up, humanity exists at the core, particularly in how characters face and grow through tribulation.

The multi-part “Brood Saga,” though it doesn’t quite reach the heights of “The Dark Phoenix Saga,” wrestles with matters of mortality. When the X-Men are kidnapped by the alien Brood and impregnated with developing infant Brood queens, the reader is seized by the horror of their situation. Even casting aside the terror of knowing your body sustains alien larvae, one still must face the question of how to remove the little parasite, what kind of sacrifice may be required. Wolverine, ever the moral philosopher, deals with the very real problem of deciding how to tell his friends of their fate and, if worse comes to worse, how he’ll deal with the issue. His quandary creates a fascinating subplot through a handful of issues, showcasing not only how far Wolverine has come since he started with the X-Men but also which convictions he is unwilling to set aside to serve a bigger mission.

These kinds of questions and conundrums flit through most of the stories Claremont presents. A single issue that sees Illyana Rasputin (Colossus’ sister) kidnapped by a demon ends with the X-Men rescuing her...but only after the former six-year-old child has spent seven years in a hellish limbo realm. To the X-Men, her childhood has vanished in the blink of an eye, and for her, she suffered for the better part of a decade. How does one deal with such a loss of innocence? A long-running subplot sees Kitty Pryde tirelessly work to prove herself to Professor X, who desires for her to join the newly founded New Mutants; seeing this assignment as a demotion from her vaunted X-Men status, Kitty spends a decent amount of time showcasing how she’s grown since joining the team. Indeed, Claremont’s prior work on her has already done much to allow Kitty room to grow; but he cements her transition from a child to a young woman here, indicating change not only through her confidence and loyalty in the face of terror but also in her developing relationship with Colossus. Claremont also, importantly, finally adds Rogue to the X-Men’s roster, giving the former villain a much-needed chance to prove herself and giving the team the chance to genuinely grapple with accepting her as a member. 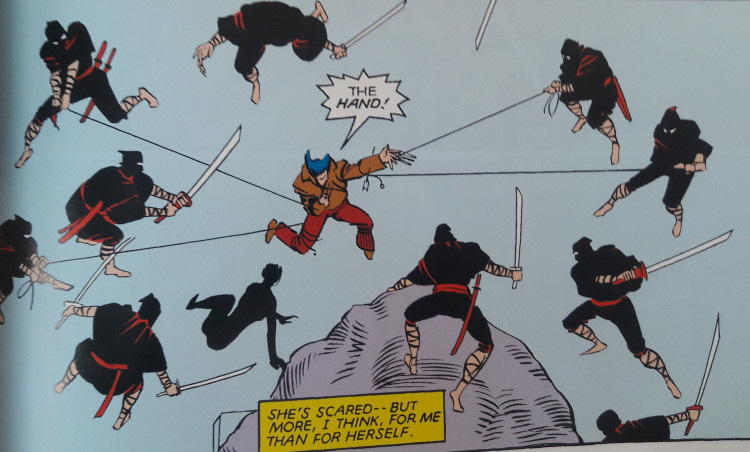 Claremont seems to take pride in presenting more “mature” sustenance for the reader; not that his stories necessarily become inappropriate or needlessly grim, but Claremont has reached a level where he’s letting his voice speak beyond simple superhero tales. A flashback story arc sees Professor X and Magneto, after meeting for the first time as Charles Xavier and Erik Lensherr respectively, treat a Holocaust survivor and fight Nazi-based goon squad Hydra. A four-part Wolverine miniseries, with art by Frank Miller, crafts a wonderfully human Wolverine tale that paints a new depth of personality and crafts wonderful empathy for the character. Storm undergoes a startling transformation that sees the one-time-leader of the X-Men change from a self-sacrificing goddess to more of a hard-lined rebel, complete with mohawk and motorcycle jacket. The X-Men face the vampire lord Dracula in two offbeat tales that toy with tropes of sacrifice and personal self-control. Still reeling from the loss of Jean Grey, Scott Summers finds new love in the arms of Madelyne Prior, kicking off a short story arc that sees him struggle with feelings of love and doubt in a decently complex manner. These characters are genuinely changing under Claremont’s pen, and reading all these adventures in one volume really impresses upon the reader how well he navigates his cast.

Perhaps Claremont’s “mature” vision is seen in no better place than Marvel Graphic Novel #5, titled “God Loves, Man Kills.” As far as I’m concerned, this graphic novel is the apex of Claremont’s writing, presenting a gorgeously illustrated narrative that pushes the racism allegory to the front in a way not even Stan Lee managed. Claremont pulls out all the stops in a story that presents engaging action with darker themes and a struggle against blatant, extreme religiosity without giving religion itself a black eye. Reverend William Stryker is an impressive one-off villain, a master weaver of words backed by powerful followers. Occasionally, the story slips into “coincidental” territory with some deus ex machina twists, but aside from those moments, “God Loves, Man Kills” is exceptional. I would argue it’s the blueprint for Claremont’s deeper themes and character work. 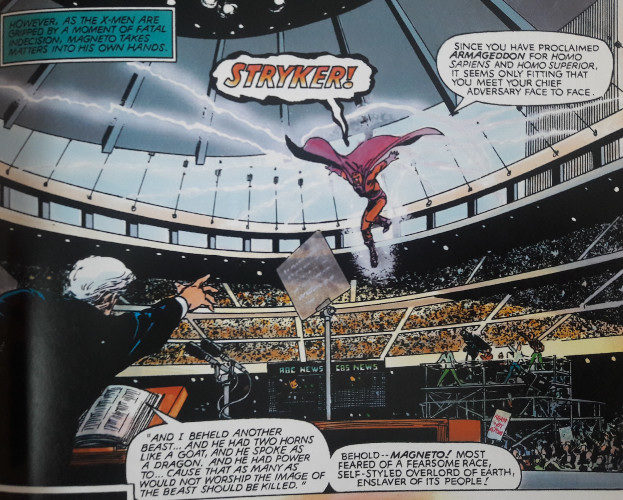 Impressive as Claremont’s writing is, I would be remiss to not mention the cavalcade of artistic talent that accompanies this volume. Claremont’s original partner-in-crime Dave Cockrum leaves Uncanny X-Men prior to ending “The Brood Saga,” allowing Paul Smith to fill in the gap. Smith’s work, from the culmination of the “Saga” through the rest of the Uncanny issues, proves him to be a more than acceptable replacement. The transition from Cockrum to Smith is beyond smooth, and though Smith’s work sometimes feels a bit more “perfect” that Cockrum’s occasionally “rougher” look, his art is still engaging. I, personally, never felt like the book lost its appeal or dramatic staying power after the visual switch.

Yet other illustrators are given the chance to shine as well. Bill Sienkiewicz provides pencils on the Dracula tales, providing an early look at his style and something to compare his later, disproportionate artistry on works such as New Mutants and Daredevil: Love and War. Frank Miller helps Claremont with the Wolverine miniseries, and I’ll admit that the famed Daredevil artist feels more at home having ninjas leap through Tokyo than through New York (the fact that Wolverine faces the Hand in these issues is also a wonderful nod to Miller’s Daredevil run). Walt Simonson pops over for a single issue, providing fun artwork that doesn’t distract from Smith’s momentary absence. Michael Golden, John and Sal Buscema, Ron Frenz, and even John Romita Jr. (for an all-too-brief 9 pages!) join in the fun, rounding out Claremont’s cast of all-stars. 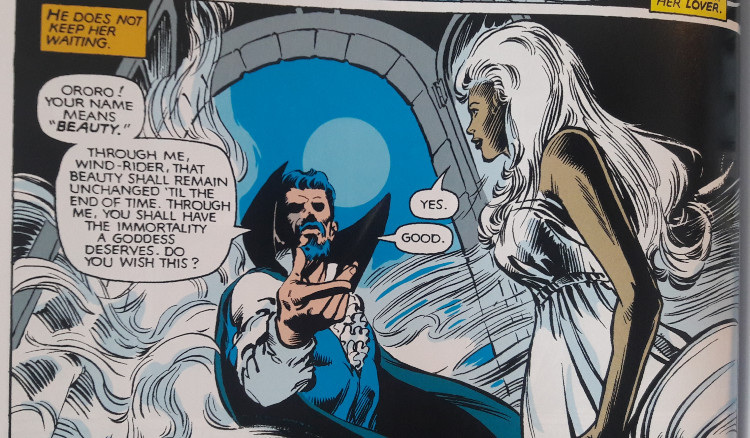 Coming in as the longest Uncanny X-Men omnibus so far (beating out the second volume by over 100 pages), this third coffee table book is packed with wondrous storytelling. Claremont, still at the top of his game, is stretching himself in a powerful direction--seemingly no longer content with big, out-there spectacles, Claremont reins in the cosmic level action just a smidge, narrowing his focus to powerful, character-driven story arcs. Wolverine, Kitty, Illyana, Storm, Rogue, and Cyclops, in particular, grow as a result of these tales, combining wonderful characterization with frantic action. Joined by a “Who’s Who” of Marvel artists, Claremont promises engaging narratives as we get deeper and deeper into his vision of the X-Men.