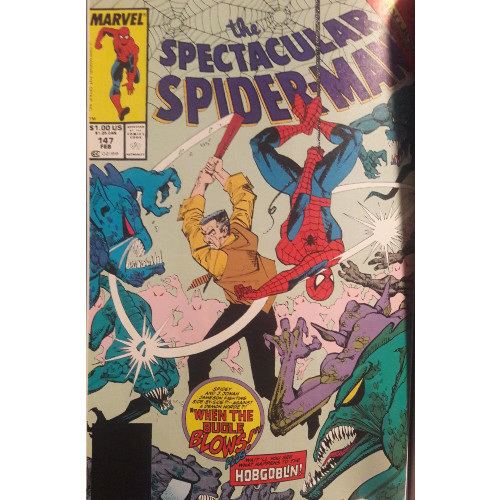 Welcome back to “Crossover Land.”

Enter a happy little isle where your favorite heroes and villains are mashed together for an overarching story which brings conflicts to several Marvel titles being printed at the time. We’ve elaborated on a few crossovers already--Marvel Super Heroes Secret Wars, Secret Wars II, and Evolutionary War--discussing the positives and pitfalls of each. Generally, as I’ve noted, I tend to enjoy crossovers where the primary story is largely contained to an individual series and not spread out over a whole ton of tie-in issues where you need to fork over some decent cash for dozens of issues, a couple of trades collecting the entire event, or a hefty omnibus.

An X-Men-centered crossover, "Inferno" sees demons invade New York and take on heroes of all shapes and sizes, including our dear friend Spidey. I could, in time, perhaps elaborate more on the event itself, but I would rather not get into details about an arc that recently received a 1200-page omnibus to dictate its entirety. For now, all you need to know is that Spidey, naturally, got caught up in the events of the crossover, playing his own role in both Spectacular Spider-Man and Amazing Spider-Man. Gerry Conway and Sal Buscema, yet again, provide the SSM issues, detailing a trilogy of tales as Spidey and Co. wallow through demons in the descending darkness. 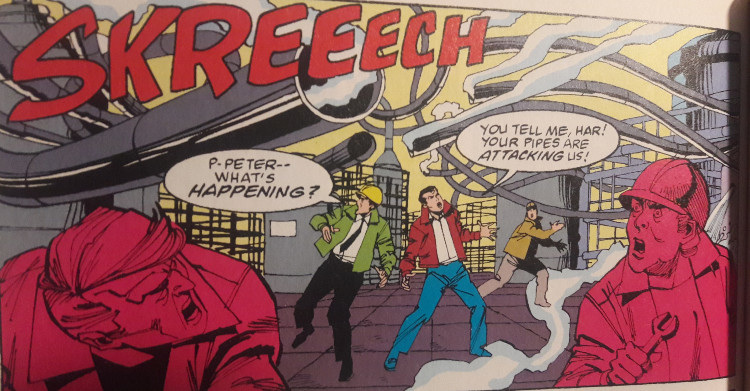 The events of the X-Men crossover seem to play little into what’s going in Conway’s stories, merely serving as a backdrop against which Spidey, his allies, and his enemies can maneuver their way through these issues. As New York deals with the worst demonic infestation the city has experienced since Surter invaded with his hordes in Walt Simonson’s Thor (which Al Milgrom referenced in a totally different Spectacular story arc about 50 or so issues ago), Spidey meanders from set piece to set piece. I called this a “trilogy,” but each issue is simply a standalone glimpse into what’s going on in Spidey’s corner of the universe as the forces of hell descend upon the city.

Conway plays a lot with characterization in these issues, and while the strands are largely unconnected, he does a decent job weaving in various elements. Jason Macendale, under his current guise as the Hobgoblin, plays a lowkey yet vital role in the first chapter. Macendale’s a character we’ve seen before--way back in one of the opening chapters of the “Alien Costume Saga,” Macendale flew around as Jack O’Lantern in an effort to gnab the Hobgoblin’s battle van. Shortly after the Hobgoblin’s “alter ego,” Ned Leeds, was killed in Germany, Macendale assumed the Hobgoblin identity and menaced Spidey from there.

Macendale remains largely in the background of Conway’s first issue, a spectral menace quietly bothering a certain Harry Osborn, who’s trying to live as regular a life as he can alongside his wife Liz and infant son Normie. Conway’s use of Harry Osborn and his consistent struggles--reflecting not only on his desire to remove himself from his father’s legacy but his own tainted history as the second Green Goblin--is a wonderful little nod to the writer's own Amazing Spider-Man run; the writer, back in the 70s, not only “killed off” Norman Osborn but turned Harry into the Goblin for a short time. Such reflections from Harry seem appropriate from Conway, especially as he leads readers to believe Harry is slowly drifting back into the insanity which claimed him the first time (man, I gotta go back and read some of those old ASM issues some time). Conway also works the "Inferno" elements into both the Hobgoblin and Harry’s stories--Macendale makes a pact with the demons’ leader N’astirh, a deal which will later transform the villain into Demogoblin, and Harry ends up visiting Osborn Industries, which comes to dangerous life thanks to demonic influence. The tethers to Harry’s story are, admittedly, weak, just a brief reminder of the insanity going on around our characters. The Hobgoblin attachment is more impactful, but even that’s largely due to the character’s future.

I guess that’s the biggest disappointment regarding these "Inferno" connections. Conway uses them particularly well in the moment, never allowing his story to drift too far into “X-Men crossover” territory to make you feel like you’re missing out by not reading all the other "Inferno" chapters. But the consequences of these connections are more hypothesized than actualized, teased rather than made tangible. Harry’s story will continue on down the road, as will Hobby’s. For fans aware of the changes and meandering plotlines, I suppose this works well. But the developments will take time to work themselves out. Delayed gratification. 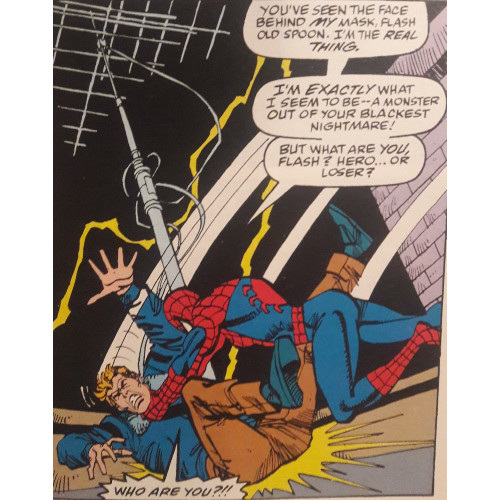 Conway’s strongest work is undoubtedly seen in the third issue, which largely focuses on Betty Brant and Flash Thompson, isolated together during the demonic rampage. Conway injects scores of history and characterization with these two, remarking not only on their rather lamentable recent fling (thanks, Al Milgrom) but other elements of their past. Betty continues mourning her husband Ned’s tragic demise, and Flash is given the chance to reflect on his own past. Conway uses the conceit of two demonic invaders trying to toy with the two, giving Betty and Flash the choice of either facing their literal and figurative demons or turn tail and run.

Flash’s characterization in particular comes off especially strong--the young man is given the chance to compare his current situation to his former high school/college glory days, remarking how little he’s actually come since that time. The one-time star quarterback/teenage heartthrob matures under Conway’s direction, allowing Flash the opportunity to decide for himself that some things really need to change. Conway also toys with his admiration for Spider-Man--long a staple characteristic of Flash’s--turning that admiration into something greater: initiative. 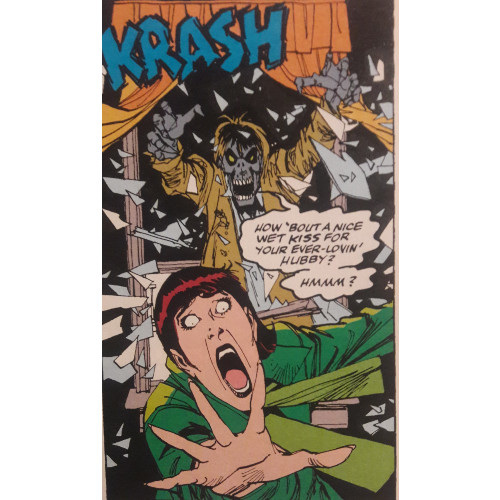 On her part, Betty is able to come to grips with her husband’s passing and confront his death in a rather literal way when a demon assumes the form of Ned’s ghost. Peter David, prior to this, had played with Betty’s grief as the young woman denied Ned’s death to the point where she imagined him still being alive. For Conway to come at that idea in a different direction, letting the demon use Betty’s grief to terrorize her, is haunting yet triumphant when Betty takes a remarkable stand against the otherworldly apparition. The conflict against these demons is a strong showing of character from both Betty and Flash, enabling them to move out from under some of the burdens they’d carried for so long.

I should at least make note of one beautiful scene where Spidey sides with J. Jonah Jameson as demonic hordes invade the Daily Bugle offices. The Bugle staff members put up a fight of their own fairly well, but the image of JJJ and Spidey fighting side-by-side is wonderfully poetic, especially as JJJ defends his beloved paper, which is made all the more comedic once you remember how much the esteemed publisher uses the Bugle to defame and demean our hero. No deep revelation is offered regarding JJJ’s relationship with Spidey, nor does this one-time partnership indicate a shift in how JJJ views the wall-crawling menace. Still, the scene of them fending off demons is absolutely entertaining. 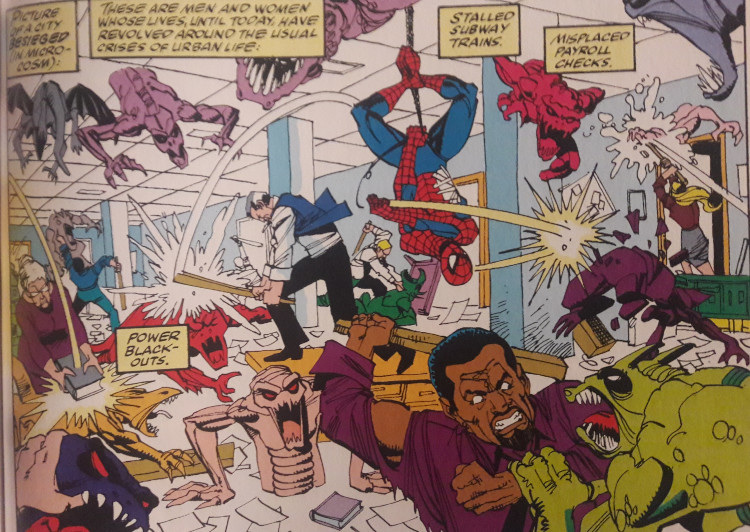 This “trilogy” proves to be some of Conway’s strongest work on SSM to date. His other tales have certainly proven his ability to adapt to the current times and invest in current characters and arcs; these issues, however, point to his comfortability when adapting to larger arcs or infusing his stories within the wider Marvel Universe. Conway neatly balances the “Inferno” aspects with his own original storytelling, using the crossover event to strengthen his tale rather than succumbing to other creators’ plots. The characters of Hobgoblin, Betty Brant, Flash Thompson, and even Harry Osborn to an extent can testify to how well Conway utilizes “Inferno” correctly, pulling in the necessary elements to bolster his characters while never becoming beholden to the overarching narrative of rampaging demons tearing through New York.