This fantastic one-shot sees Spidey and Wolverine duke it out for the very first time, an engaging tale that has stood the test of time 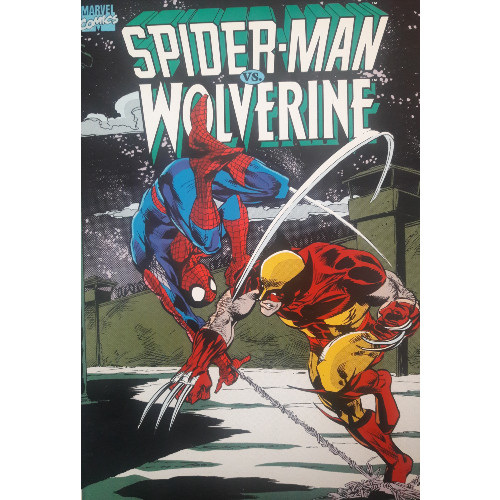 Oftentimes, Spider-Man finds himself paired with characters who relate to him in some shape or form. Spidey and Daredevil? Both street-level heroes. Spidey and Human Torch? Similar ages. Spidey and Doctor Strange? Uhm...both make that “two-finger-palm-tap” hand gesture?

Wolverine, though, appears to be an outlier. The clawed Canuck doesn’t seem to have much in common with our Web-Headed friend, save for the fact both of them wear spandex and fight bad guys. And yet, over the decades, Spidey and Logan have found themselves paired on multiple occasions...and perhaps it’s simply because they’re so different. Spidey’s joke-telling, goofy demeanor clashes with Wolverine’s more serious disposition. Wolvie’s the kinda guy you’d think would pair well with Frank Castle, another surprising Spidey ally. Unlike Castle, Wolvie bears a particular set of honorable characteristics that Spidey appreciates, setting him apart from the skull-emblazoned vigilante.

Spider-Man vs. Wolverine #1 has remained a fan-favorite issue for over thirty years, standing as a significant team-up between the Wall-Crawler from Queens and his surly pal from the Great White North. Several reasons exist for its continued fortitude, including Christopher Priest’s writing capabilities and the direction he takes his starring protagonists. 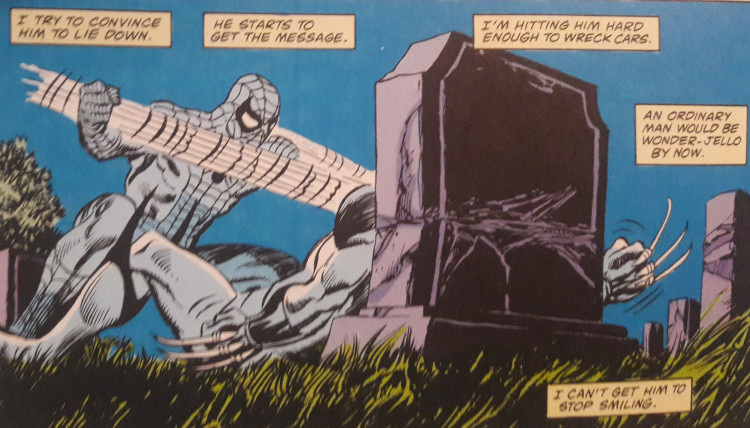 As I’ve commented on before, Jim Owsley changed his name to “Christopher Priest”; since that is his current given name, it feels more appropriate referring to him by that name for this post.

Priest has, particularly recently, become a favorite writer of mine, mostly for his globe-trotting, amusing, satirical take on Prince T’Challa of Wakanda. For five years, Priest wrote Black Panther (which I hope to be reviewing in a few installments of “(Strand)om Stories” at some point), crafting a nuanced, smart, and often witty saga for the sable-suited cat-man. Priest’s voice is no less powerful, practiced, and poignant here, twenty-some years earlier. Several months back, when I examined Priest’s contribution to the “Alien Costume Saga,” I made similar remarks--despite whatever other changes Priest’s craft has undergone his penchant for strong dialogue remains true for this one-shot. 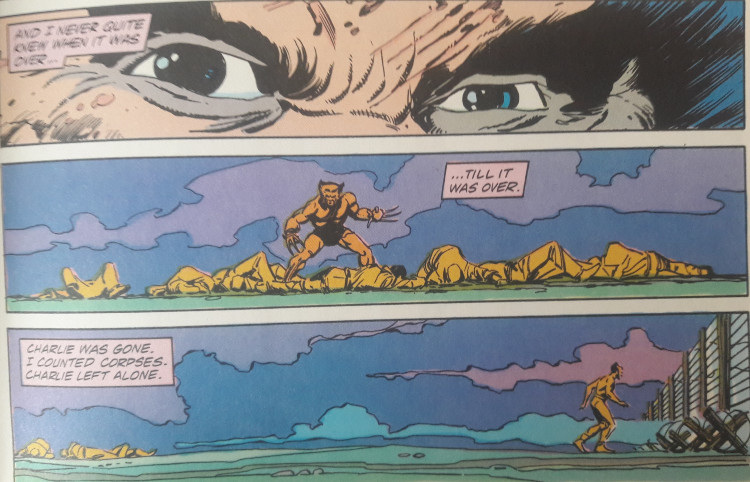 Priest entertainingly balances his script between Wolverine and Spidey’s viewpoints, with dialogue boxes, instead of thought balloons, providing the voices for each of our heroes, similar to how Barry Windsor-Smith crafted narration for his Weapon X story arc. Priest understands his characters well enough to handle both Wolvie and Spidey with grace and love aplomb. Wolverine’s signature gruff demeanor is established from page one, yet his humanity shines through. Priest seems to have either read or was familiar enough with Chris Claremont’s work on Uncanny X-Men or other Wolverine stories to find that careful balance between Logan’s rough-and-tumble killer instinct and his more human nature. With Spidey, Priest pushes Peter Parker’s sarcastic brand of humor while also emphasizing his care and compassion.

The question I asked myself going into this tale was simple: with a premise set solidly in Cold War-era conflict, how was Priest going to successfully bring Spidey and Wolverine together without resorting to some kind of convenient plot device? Y’know, “Oh, it just so happened that both heroes were tailing the same bad guy” kind of deal that you see pop up in comics from time to time. Priest navigates this quasi-successfully. I say “quasi” because he does a fantastic job setting up the Wolverine side of the equation. A short prologue introduces us to an action-packed set piece setting up the later conflict, with Wolverine hunting down an old friend, Charlemagne, who’s gunning for Soviet spies. He and Spidey’s paths collide when our Web-Swinging compadre ends up on the hunt as well, guided to Germany with fellow Daily Bugle employee Ned Leeds. Peter’s involvement is a little less well-defined, but it still isn’t “dump Spidey into a random conflict and see what happens.” Spidey almost catches Wolverine’s old friend earlier in a shockingly violent sequence where Charlemagne opens fire in a downtown area while Peter and MJ are hanging out (on a date?). The moment is surreal and somewhat grim in its realistic depiction of public terror. But this event, along with Peter being saddled with Ned, leads to the Spidey/Wolvie pairing. So, for the most part, Priest avoids any coincidental pitfalls related to the characters’ teaming. 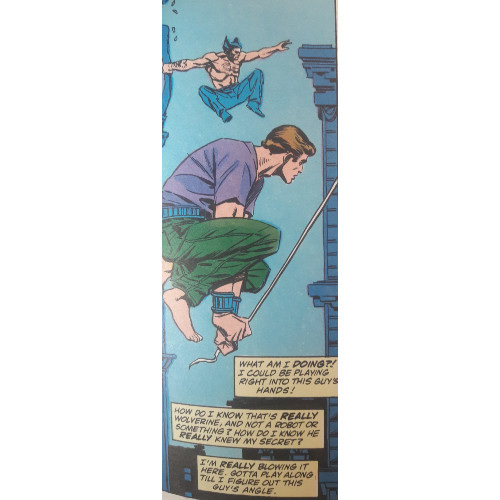 Fans of this one-shot may come into this blog unaware of two major plot points, but because I think these points deserve discussing, I am going to spoil them. BE WARNED.

Priest kills two central characters. Not our heroes. But Charlemagne and Ned Leeds die by the end of the issue. I think most people who peruse message boards or read listicles about “Spidey and death” or “Spidey and famous stories” are most likely aware of these moments, but even thirty years later, they’re tragic gut punches, for two different reasons. I wondered how readers initially reacted to Ned’s death, sudden and tragic as it is. There’s no warning, no indication from Priest, that Ned is about to die; we don’t even see the moment itself happen--Peter happens to stumble upon Ned’s body. Killing the young reporter in a one-off issue instead of a main Spidey series is a gutsy move on Priest’s part and, in addition to his dialogue, sets him apart from other writers of the era. Even heading into the issue knowing full-well what was going to happen, I still felt a twinge of tragedy when the moment appeared; it’s done in an almost callous fashion, and I appreciate the “yank the rug out from under the reader’s feet” move by Priest. You're caught off-guard, taken aback; Priest barely lets the moment set into the readers' minds before moving on to additional action sequences. Later stories will rope Ned’s death into the needlessly complicated “Hobgoblin Saga,” but I would rather not use the space allotted me to discuss that story arc. Here and now, separated from the spectre of that grinning ghoul, Ned’s death is a tragedy, sudden yet remarkably impactful. 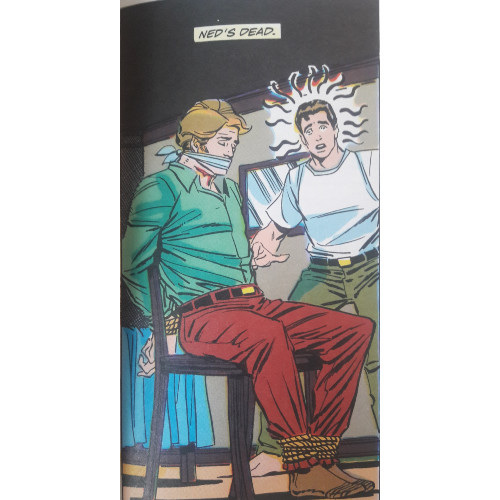 Charlemagne death, though not as infamous as Ned’s, is nevertheless important for one specific reason: Spidey kills her. In the midst of a scuffle with Wolverine, Spidey senses (with his Spidey senses!) someone sneaking up on him; convinced Logan is creeping behind him, whirls and delivers a bone-shattering blow, knowing full-well the mutant can take the punishment. But in a startling revelation, Priest drops the bombshell that Spidey has haymakered Charlemagne instead...and without the healing abilities of her Canadian comrade, Charlemagne dies of her wounds.

Priest would later explore this idea more deeply, particularly Spidey’s guilt, in a Web of Spider-Man issue I don’t own (yet). As such, I can only touch on Priest’s writing here. He fantastically wrestles with Spidey’s guilt for the rest of the issue, interspersing the narrative with panels flashing back to the moment Spidey strikes Charlemagne. As much as Priest’s script indicates Spidey is attempting to move on, the wordless flashback panels suggest otherwise, a haunting, lingering reminder of a horrible mistake.
I wondered, upon finishing the one-shot, whether I was satisfied with how Priest handled Charlemagnes’ death--the flashback panels are a wonderful inclusion, but the death isn’t fully discussed between Spidey and Wolvie, nor does Peter consciously reflect on it. Giving it further thought, I decided “Yes,” Priest’s depiction of Spidey’s guilt was adequate and significant, especially considering he used a later issue to probe further. I found that, while words were lacking, Priest’s ability to inject emotion wasn’t. The ending remains powerful, a stark look at Peter’s guilt without burdening the reader with needless exposition.

Spider-Man vs. Wolverine #1 wasn’t the first time the two heroes fought alongside each other (though it may have been the first time they scuffled), but it’s become significant in Spidey lore. Priest’s brilliant characterization and dialogue, plus the impactful tragedies, carry the story well and keep it in the minds of fans long after they’ve finished reading. Other Spidey and Wolverine stories have been produced since, but this one-shot has gone down as the most famous pairing between the two heroes; three decades later, this single issue about an unlikely duo still holds up as well as Wolverine’s adamantium skeleton.