Strong standalone issues don't add up to an excellent narrative overall, but several backup stories weave together for a fantastic background tale 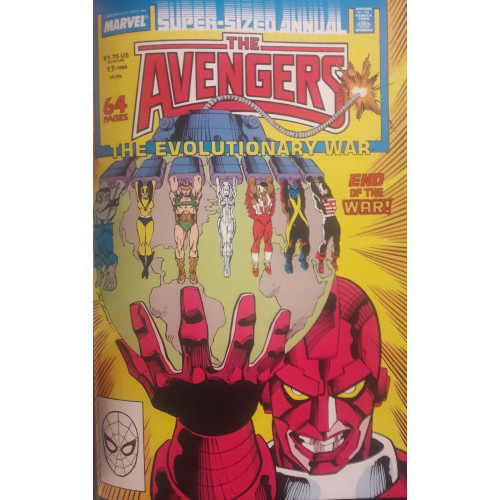 Last time we examined a massive Marvel myth, Secret Wars II provided a potentially engaging story born from lofty ideals that failed to enchant as deeply as its predecessor, the quirky yet ultimately fulfilling original Secret Wars. These two crossover extravaganzas pulled in the grand pantheon of Marvel superherodom, bringing heroes and villains face-to-face outside of their regular titles. While the main crossover series focused on the stories at large, tie-in issues told what occurred to individual heroes outside of that primary title. Thus, while Secret Wars told of Spidey’s time on the Beyonder’s Battleworld, the Amazing Spider-Man issues bookending the series revealed how Spidey entered and exited the grandiose epic. Secret Wars II pulled a similar stunt, yet the number of tie-in issues was dramatically higher, meaning the series was not nearly as self-contained as Jim Shooter's first Beyonder-centric story.

Does “Evolutionary War” aspire to similar heights of grandeur and glory? And can it tell a tale all on its own, without the need to sell three dozen other issues at the same time? 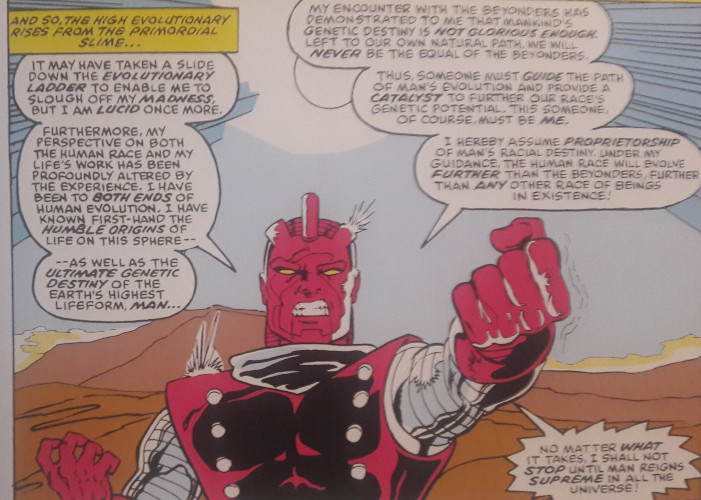 Right away, “Evolutionary War” fixes an oversight which cropped up during Secret Wars II: this story is, thankfully, much more streamlined. Instead of spread across one main series and dozens of issues across various Marvel titles, “Evolutionary War” is merely told in eleven installments, contained to several annuals. This format feels much more concise, allowing the event to be crafted in such a way that you aren’t forced to follow multiple series and buy dozens of issues if you’re looking to collect the whole saga.

Dangling plot threads exist, naturally, but these aren’t necessarily terrible. The included Fantastic Four annual, for example, focuses heavily on Crystal, an Inhuman and the former wife of Quicksilver who had joined the FF and is now beckoned to return by the Inhuman Royal family. Engaging as the plot is, and as little as it contributes to the overarching “Evolutionary War” saga, I never felt like I was missing out on big chunks of story or that the creators were pleading with me to follow other mags if I wanted to know the next big event to happen in the life of the FF or the Inhumans. Interesting mysteries certainly abound--how will the impact of Crystal’s decision impact Marvel’s First Family? Who the heck is this second Watcher who gazes upon the transpiring events?--and none of them may be pertinent to the story at large, but these developments nevertheless hold the reader’s attention for the duration of the issue. 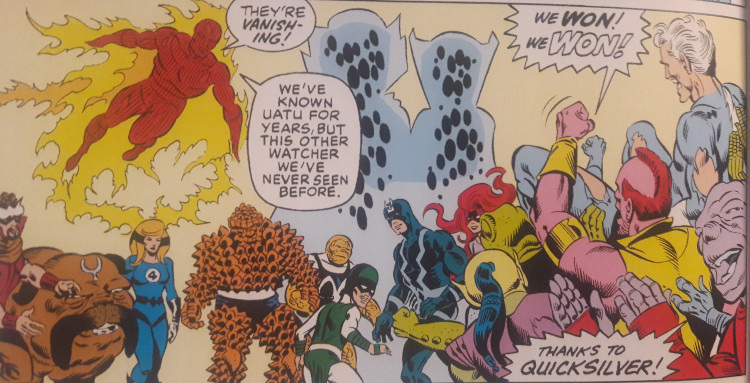 Therein lies the biggest problem with this event itself. Each issue may be engaging on its own, yet when considered in tandem, the annuals fold in on themselves like a collapsing house of cards. The entire arc is not sufficiently engaging to warrant a ton of attention, chopped as it is into these smaller, bite-sized chunks.

I’ll complain about that later, but I do really want to take the time to commemorate each issue’s strengths. For about 30-odd pages, each annual nicely pulls you into the lives of their respective characters, delving a little bit into their world and their circumstances. I’m pretty sure I’ve complained in the past about how crossover events such as these tend not to allow decently deep dives into the heads of our heroes and villains, how the format derives only surface-level tension. Yet, for most of this event, as I detailed above, I didn’t feel like I was just skimming the surface. Each annual allows decent depth and characterization. 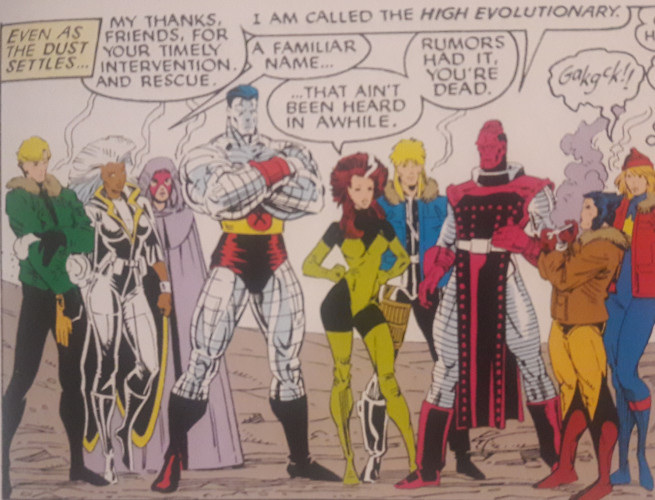 Part of it, admittedly, may be just because I’ve become something of an X-Men nut recently, as one can tell from my reviews on Chris Claremont’s run. Jumping back into the world he created for the X-Men is exceptionally fun, especially when he’s paired with Art Adams in an adventure which sees the titular mutant team venture to the Savage Land. Likewise, the New Mutants, guided by Louise Simonson, get their own fun adventure as they rescue a fellow teammate from the hands of the High Evolutionary’s men. Perhaps I feel some elation getting back into the world of X-Men and seeing how it shaped itself circa 1988. Watching these familiar characters is a blast on an individual issue level. Seeing the various relationship strands Claremont had continually forged shows how consistently strong his character work has always been; likewise, Simonson's capability at creating genuine interactions between the New Mutants members makes me excited to read some of their earlier stories, which I picked up recently.

“History” becomes a surprisingly engaging aspect to each annual as well, as writers tether their tales to interesting bits of lore. When X-Factor travels underground, Simonson has Jean Grey comment on an adventure the original X-Men embarked upon years earlier, shortly before the “death” of their mentor Professor X (worry not, he recovered). Claremont utilizes an old X-Men foe he’d created and has Colossus reunite with friends he made on an earlier trip to the Savage Land. The Silver Surfer annual sees the sentinel of the spaceways encounter the long-lived Eternals, who I’ve gained an appreciation for recently. And the West Coast Avengers travel to Wakanda, where I’ve also found myself a time or two in the past several months. Bits and pieces like these, again, strengthen each individual annual, connecting them to the universe at large. When writers acknowledge the expanded world/history their characters belong to, their stories feel more vibrant. 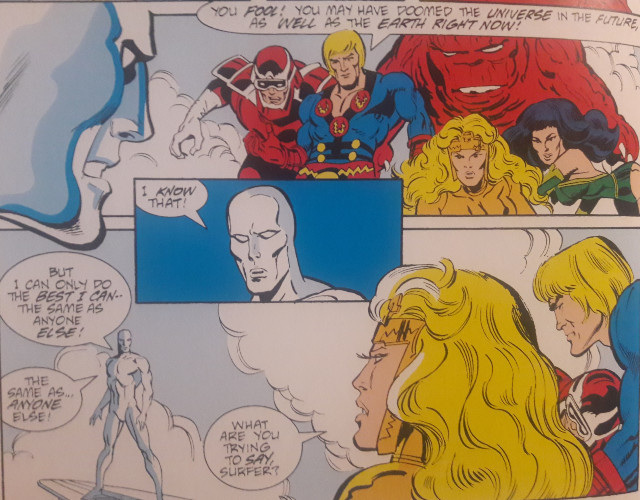 If only the same could be said for this saga’s central narrative. The High Evolutionary, seeking to advance humanity’s genetic potential, seeks to rid Earth of degenerate strains of life--drug dealers, subterranean mammals, and other evolutionary dead-ends. Each annual focuses on this goal in part: the Punisher fights armored thugs bent on culling South American drug pushers; Spider-Man accosts the Evolutionary’s thugs on three different occasions as they eradicate genetic wastes; the New Mutants keep the rogues from dispatching two seemingly unwanted mutants. If you exist on the lower end of the High Evolutionary’s totem pole of life, you better pray a superhero keeps you from getting skragged. The idea, at its core, is interesting. I would never advocate such mass scale eugenics, but conflict permeates these issues.

The problem, unfortunately, is that the story moves in random, almost disconnected chunks. Very rarely do later issues tie-in to earlier developments. A Spider-Man annual momentarily remarks on the events of the last few issues, and the West Coast Avengers annual comments on a Savage Land story told in the X-Men annual...but the tethers are few and far-between. The writers and artists assembled fail to take advantage of a potentially interesting, interconnected story and focus too heavily on their own issues. As a result, like I mentioned previously, each issue is entertaining in its own way. But together, the story fails to coalesce. Spidey’s involvement, specifically, is confounding. He encounters the Evolutionary’s men three times but never gets other authorities or heroes involved; he barely wonders what the heck is going on and continues on his merry way, even after a confrontation with the High Evolutionary himself. The saga’s ending chapter focuses on a band of Avengers who, lucky for them, put a halt to the villain’s machinations. But what about the other characters who’ve been involved? X-Men? New Mutants? Fantastic Four? West Coast Avengers? Is anybody out there? Seemingly not. 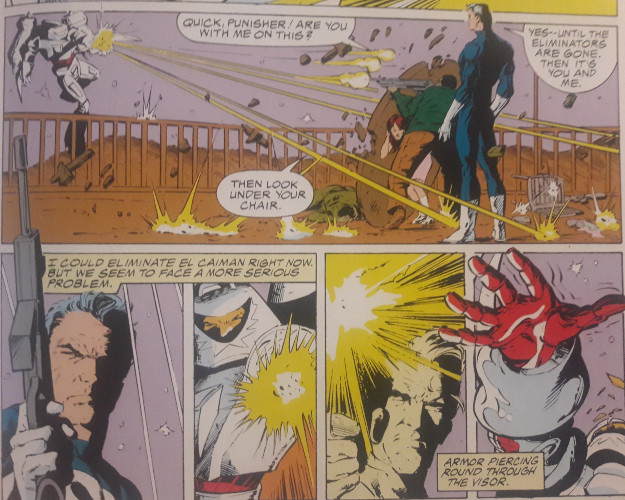 I should spend some longer time fleshing out Spidey’s side of things. His three annuals--in Amazing, Spectacular, and Web of Spider-Man--represent a full fourth of the entire event, yet again, does very little to progress the entire narrative. In some ways, the “Evolutionary War” aspects seem only tangentially related to other Spidey-related happenings. The Amazing Spider-Man annual also introduces Speedball, a future New Warrior, and while Tom DeFalco, David Michelinie, and Mark Bagley seem to have a blast playing around with him, the resulting tale feels a tad disjointed. The Web of Spider-Man annual toys with a “Peter Parker as book-touring author” aspect we’ll see elsewhere but does little to further anything else. The issues sort of limp along, seemingly uninterested in the larger events unfolding around them.

The Spectacular Spider-Man annual deserves its own mention, for one very specific reason: the clone of Gwen Stacy returns. I plan on spending at least one future posts dicussing the “original Clone Saga” (and one post where I go into a deeper dive), so all I’ll say here is this: years ago, Gerry Conway killed off Gwen Stacy and then, due to fan backlash, cloned her (and Peter Parker). This annual features the clone's dramatic reappearance as Spidey saves her from the hands of the Evolutionary’s men. Conway uses the issue’s end to drop a bombshell on readers: Gwen’s clone...isn’t actually a clone? No, Conway announces, she’s merely a genetically altered woman named Joyce Delancy, a former student of Miles Warren (the Jackal), himself a former student of the High Evolutionary. The revelation is odd, yet seemingly works well within the issue itself. I’m still not certain why Conway chose to retcon himself, but the backtracking itself isn’t so much the issue as what future writers will do with the information during the 90s “Clone Saga.” More on that in the future, though. 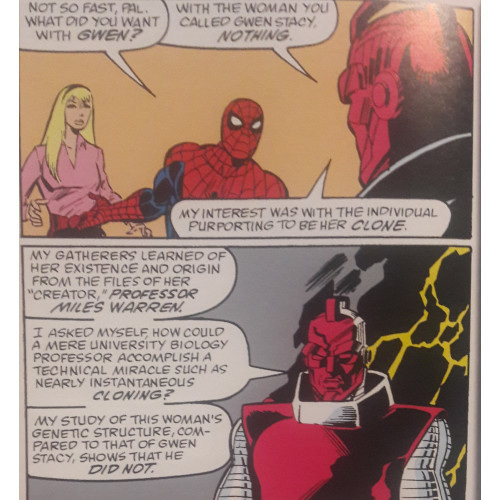 Included in the back of each annual is a backup strip, written by Mark Gruenwald and illustrated by a handful of talented artists. These strips dig deep into the High Evolutionary’s backstory, detailing his rise from simple scientist to godlike progenitor. It is, in my mind, the highlight of the event, providing a genuinely interesting and full arc for the character which ties nicely into previous pieces of Marvel lore (I'm eternally grateful to the fellow blogger who pointed out that Gruenwald shows young Jessica Drew--the future Spider-Woman--playing as a child with an equally young Philip Masters--the future Puppet Master--in what is one of my favorite nods to Marvel history that I've ever read). You learn a lot about the Evolutionary and, in some ways, Gruenwald makes the character’s methods and motivations clearer for the reader. In an event where various ideas are lobbed about but never fully stick--a philosophical-turned-physical confrontation between the Evolutionary and X-Men foe Apocalypse seeds the concept of deep debate yet never reaches fruition in subsequent annuals--these smaller strips feel fleshed out. They’re thoughtful, interesting, well-written. They provide more closure than the rest of the event does over its 11-chapter run. 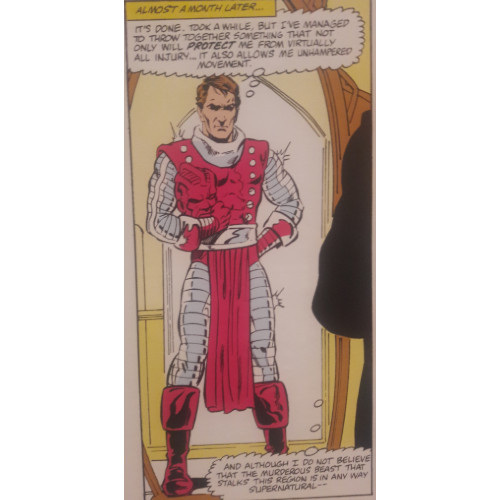 For a man seeking to elevate humanity by eliminating its dregs, the High Evolutionary falls prey to his own lurking hubris, overcome by an internal enemy not even he can eradicate. Cynical it may sound, but I’d say something similar happens to this crossover event. “Evolutionary War” ends up being more of a series of pitched conflicts, scattered battles that connect to the story more or less...usually “less.” Strong on their own, the assembled annuals fail to raise the narrative or its characters to the lofty heights it seeks to ascend. Perhaps our storytellers could take a page or two from Mark Gruenwald’s text, which exemplifies how even those who see themselves above men can often be defeated by very human characteristics.