A paint-by-numbers battle scene creates a weaker issue, with some interesting character development attempting to offset the action 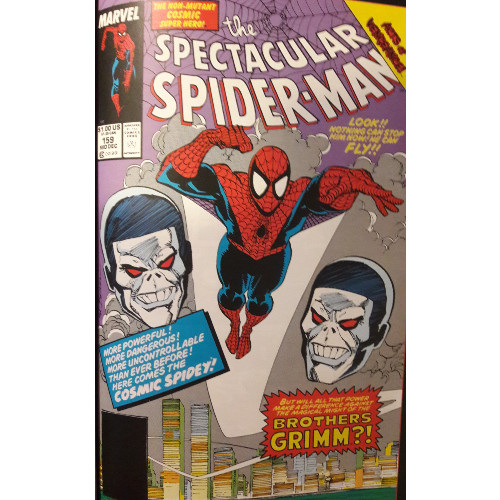 Once upon a time, in a land far, far away, there lived a young man who was bitten by a radioactive spider. Gaining incredible abilities from this spider, the young man embarked on a life of showbiz, until his uncle was killed one fateful evening by a burglar the young man could have apprehended earlier. On that night, the young man learned his greatest lesson, that with great power there must also…

Oh. You’ve heard this one before? Sorry.

Like many fabled myths, the story of Spider-Man stars a flawed protagonist whose life is upended by a combination of circumstance and decision. Maybe Peter Parker didn’t ask to get bitten by the spider, but he chose how to use (or how not to use) his grand abilities. As a result, Uncle Ben was murdered by a home intruder, forever altering Peter’s life.

Yet, unlike many fairy tales, Spidey’s story hasn’t had a “...and they lived happily ever after” ending, precisely because his is a story which keeps on developing and growing. Sometimes, his tales inspire hope and joy, filled with a sense of wonder and adventure.

Other times, they can be a little Grimm. 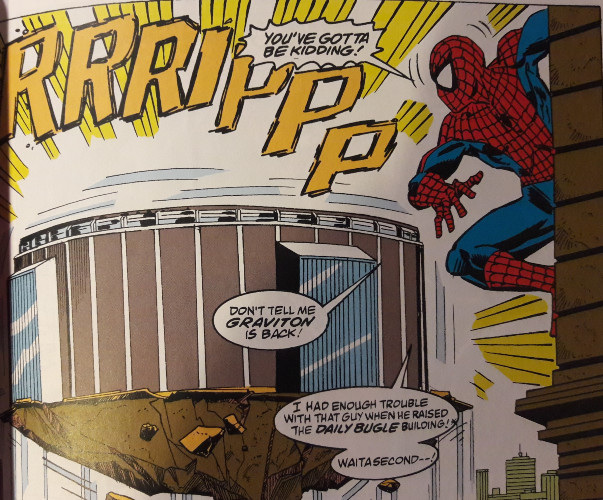 Five blogs in, and I already feel like I’m running out of things to say.

If you’ve read some of the other posts discussing this “Cosmic Spider-Man” story arc, you’ve perhaps become well-acquainted with the formula the last several issues have utilized: some bigshot supervillain sends a smallshot supervillain after our recently-upgraded Web-Swinger, who proceeds to prove to them just how powerful he’s become since Peter was doused with unknown-yet-seemingly-cosmic-in-origin energy. Our boy can fire lasers from his fingertips like some kinda alternate version of Cyclops, and his webbing responds more immediately to his thoughts, even more so than when his black, alien organism costume pulled a similar feat. 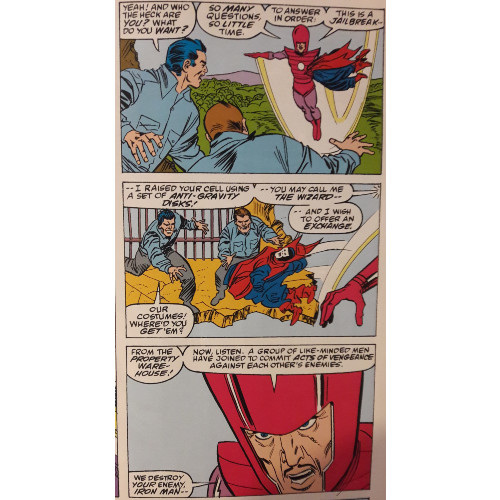 As I’ve noted in prior posts, writers David Michelinie and Gerry Conway have certainly tried working within the confines of this story arc, a job that seems only more frustrating with the sheer amount of material dedicated to the event-sized “Acts of Vengeance” story arc that, sadly, Spidey is really only a peripheral player in. Why else would the Wizard free a couple of two-bit players like the Brothers Grimm from prison only to have Doctor Doom sicc them on Spider-Man? Would Conway even utilize such characters or encourage such a plot if it weren’t for the overarching crossover event causing havoc in the background?

Hence why these blogs are becoming a bit more difficult to write, hence why I’d like to vent some of my own frustrations a bit more transparently. In trying to blend the “Acts of Vengeance” crossover with the “Cosmic Spider-Man” arc, Conway and Michelinie seemed to have found an intriguing angle: have some fairly impressive supervillains try to knock off a recently supercharged Spider-Man. In some of these instances, the idea makes sense: both Titania and Magneto went after Spidey, and both of those villains are solidly in a higher weight class in terms of sheer brawn and power level, respectively. Titania’s faced the She-Hulk; Magneto controls magnetic poles. They aren’t slouches in the power department. And while Spidey’s win over Titania was more definitive than his fight with Magneto, Spidey still stood up to the Master of Magnetism on his own. 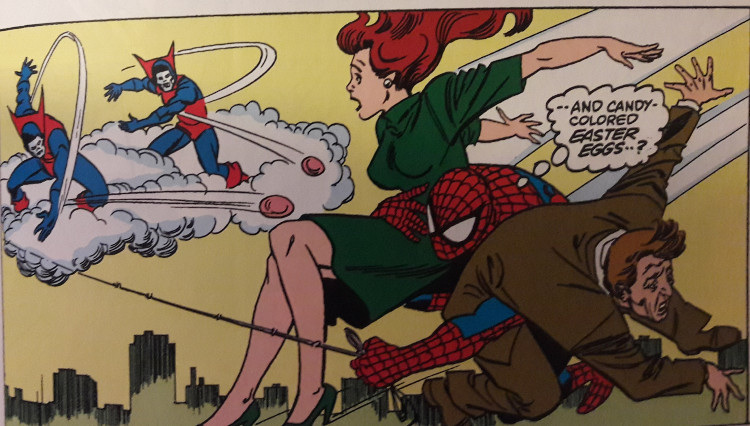 But then you take a step like Conway takes here and insert a couple of has-been losers like the Brothers Grimm. They’re goofy and gimmicky, and while their main shtick is kinda clever (weaponry, like exploding pies, based on fairy tales and nursery rhymes), they don’t seem to be a match for Spidey. And yet they are...temporarily.

What are you gonna do with a Spider-Man who’s gained the abilities of Superman? Heck, what do you do with a nearly invincible Superman in general? It’s an age-old comics question in figuring out how to handle a nigh-invulnerable superhero. The easiest solution, often, is to design some sort of weakness. Kryptonite for Superman, for example. Thor, back in the day, couldn’t be separated from his hammer for more than a minute, otherwise he’d transform into Don Blake. The Hulk used to turn back into Bruce Banner once the sun rose, so he wouldn’t always be a rampaging powerhouse of destruction. 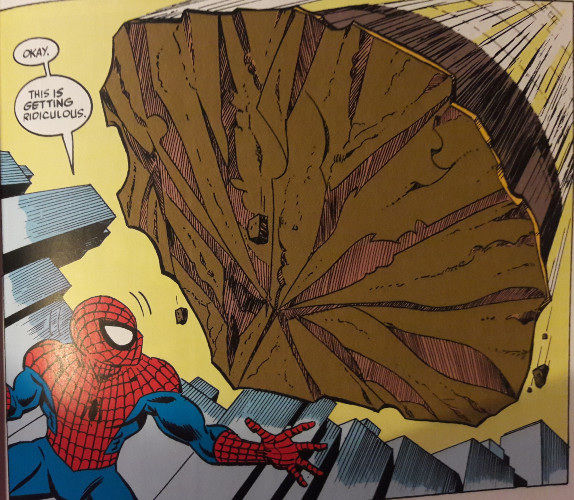 Conway’s solution, temporary as it is, seems to be to let our twin bad guys distract Spider-Man. As the saying goes, “If you can’t beat ‘em, make sure they worry about something long enough for you to make a getaway.” Something like that. Conway and Buscema try to make an invigorating battle sequence out of this ridiculously lopsided match-up--taking a page from David Michelinie’s book, they have the Brothers Grimm levitate an entire stadium Spidey’s later forced to catch--but both writer and artist fall prey to the simple, goofy premise they’re sadly forced to write under. We’ve seen it happen before, and it happens again here. Spidey’s not really hurt, injured, or otherwise negatively impacted by the battle. He saves the people in danger, beats the villains, and goes on his way. There aren’t any stakes.

In this issue’s quieter moments, Conway works to add some interesting developments, and these prove somewhat stronger than his attempts at engaging fisticuffs. Perhaps concerned in the wake of his almost disastrous battle with Magneto, Spidey at least seems more aware about the negative impacts of his powers. He details nuisances, such as his enhanced spider sense, which reacts to even fluttering pigeons like they’re a four-alarm fire. Moments like these are akin to what Michelinie has tried sprinkling into some of his recent issues, hints of humanity expressed by our hero. Spidey’s stronger, great, cool, that’s all well and good. But his enhanced abilities come with limits and annoyances which have started showing him the downside to these fantastic abilities.

The issue’s final page is dedicated to this concept, as Peter eats a “lukewarm TV dinner in front of the tube,” as he grumbles. Here he is, with all this power, and what’s changed? Nothing...except the fear of what his new incredible powers could do if used irresponsibly. In a sense, Conway is trying to assure readers that we’re still reading the same old Peter Parker in a same old Spider-Man comic. He’s just much more powerful, and if he happens to wiggle his pinky wrong, well, there goes the Brooklyn Bridge or the Statue of Liberty. Whoopsie!

It’s a nice sentiment that Conway adds to the issue, and my only complaint is that there isn’t enough of it. Other subplots work their way into the issue--Robbie Robertson’s ongoing court struggles, as well as a grumpy JJJ dishing on Peter his rage at losing the Daily Bugle to Thomas Fireheart (the Puma)--and these are used in short spurts. These subplots are tame, sporadic, not taking away much from the issue but reminding us of the current status quo in the “Lives of the Friends and Family of Peter Parker” drama. Yet this ongoing struggle Peter’s having with power--this is something. Michelinie kicked off a similar notion during Spidey’s fight with Magneto after Peter inadvertently caused a cruise ship to almost capsize. Peter fully realizes the true weight of his powers, and true to form, reacts morosely. These abilities are more burdensome than originally envisioned. 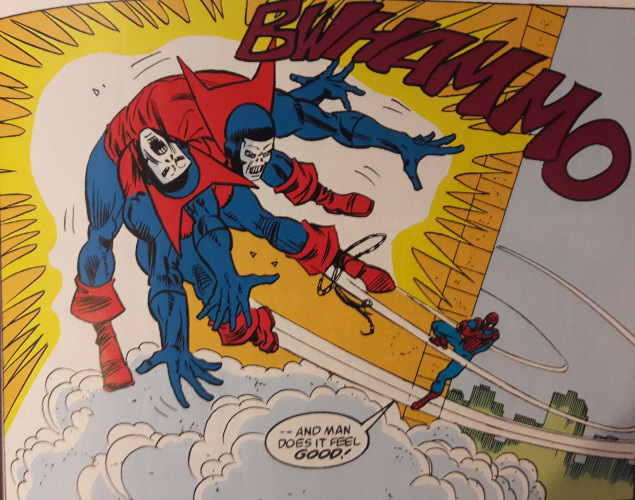 I just wish the idea were stronger or used more liberally. All these good character moments happen in-between or after panels of Spidey beating the daylights out of the Brothers Grimm, two geeks who ride around on flying cloud things and throw pies. As I’ve commented before, the balance between “Acts of Vengeance” and “Cosmic Spider-Man” feels off. Conway and Michelinie are trying to play with two different plots while also maintaining a fuller sense of Peter Parker’s world, and the trade-offs outweigh the benefits. Potentially intriguing character development for Peter is sidelined for the long-running crossover plot, which is hampered by the use of two-bit baddies like the Grim Twins over here. Combined, neither plot receives the time and weight each deserves separately. Thus, we get a bit of a frazzled issue; it ends particularly well, with good moments seeded throughout, but the bulk is a bit hectic, muddled by an attempt to squeeze Spidey’s little world into a much bigger universe.