This issue looks great, but while Micheline toys with some loftier notions, his concepts remain buried beneath a pile of gimmicky 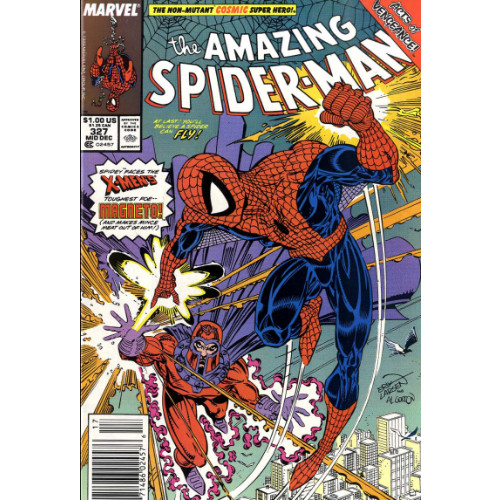 “You’ll believe a man can fly.”

So rang out the tagline for the 1978 film Superman: The Movie. Kal-El, sent to Earth from dying Krypton, was imbued with incredible abilities by our Earth’s sun. He could soar through the skies, fire bolts of energy, was impervious to almost anything save little pieces of green rock.

11 years later, our boy Spidey was jolted with unknown energy that, apparently, had cosmic properties (though we’re never told this). Like the Big Blue Boy Scout, he can fire energy (from his hands, though, not his eyes, but the principle is the same) and is more invulnerable than he once was.

But would you believe a spider can fly, too? 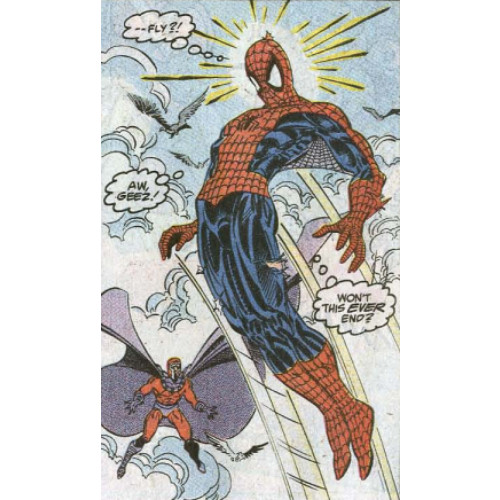 The image of Spider-Man floating in the air while trying to fight Magneto is as ridiculous as it sounds. Suspended by his own power, Spidey hovers near a seemingly surprised Master of Magnetism. Aw, geez, he wonders. Won’t this ever end?

At this point, it’s getting a little difficult to keep writing about the same concept over and over again. We are still in the muddled midst of the “Acts of Vengeance” crossover, and though I really haven’t read many non-Spidey issues involved in this “crossover,” I wonder if most of them went the same way the last three Spidey chapters have gone. Villain attacks hero, gets beaten senseless. Rinse, repeat, maybe gargle a little to get the same bland taste out of your mouth. I do faintly recall some Walt Simonson Fantastic Four issues that tethered the “Acts of Vengeance” into an ongoing story where the FF testified in Washington DC. This, if I remember correctly, was handled entertainingly, almost parodically. Wave after wave of villains attack the FF at such random intervals the whole thing becomes a joke of itself.

Not so these Spidey issues. Outta nowhere comes Graviton, Trapster, Titania. Sure, they've all got their reasons--Titania’s personal vendetta against Spidey the most well-defined motivation--but it’s all random. I can see the appeal to some of these characters--a guy who can manipulate gravity? That sounds like a problem Spidey doesn’t often face--but Micheline and Conway both have dropped the ball at making each fight feel like anything more than a one-off assault. Spidey doesn’t even seem all that preoccupied with why these random yahoos keep targeting them; like the FF issues, if his nonchalance were played for laughs, I’d get it. It’d be an amusing running gag, Spidey just tossing costumed thugs around without a care. But in this instance, Spidey plays the whole thing with as straight a face as possible. 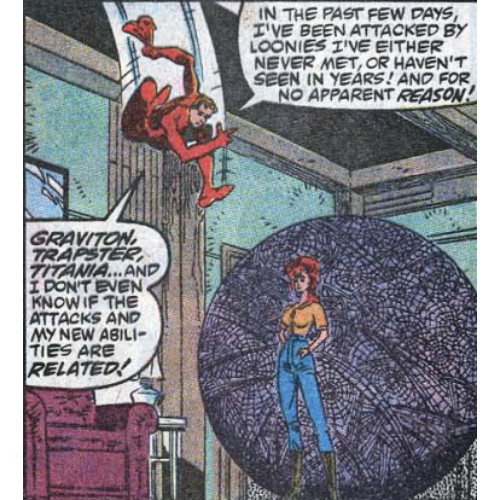 In this issue, at least, Spidey briefly wonders if these attacks are somehow related to his new powers, but this feels like blatant conjecture on Micheline’s part to stir up some unnecessary tension and remind people that, lookee over here, we got two different plots going on! Are they related? No, not necessarily. Spidey’s new abilities certainly allowed him to whomp Trapster into the ground, and they even let him send Titania careening through a building All well and fun, to be sure, and such scenes enable pencilers to give some titanic (Titania-c?) visuals. And while a part of me doffs my cap to the writers for not ingraining “Acts of Vengeance” so deep I feel like I need to read everything to know what’s going on, Conway and Micheline have not done enough with the concept to warrant more than passing interest.

Micheline, in this issue, certainly works to garner a less tepid response. Magneto, one of the masterminds behind the vengeful actions, decides to become involved directly, going after the Spider-Man hisself. What follows is a sequence of visuals a reader such as I certainly find agreeable--Erik Larsen gains points for imagination as he handily has Spidey go toe-to-toe with the X-Men’s greatest enemy. Those irritatingly anti-Spidey laser blasts pop up, but this is the first issue which feels like a writer/artist team utilize Spidey’s new cosmic awareness as an extension of his preexisting prehensile powers. Spidey’s agility and strength are on fire here as he and Magneto duke it out in a junkyard, Larsen’s pencils packing in the details to form a fully-realized environment. Few moments are better than seeing Spidey batter a car with an actual bat, made from his complementary webbing. This is, perhaps, the best brouhaha out of all the fights we’ve witnessed so far, specifically because Spidey feels most like himself. 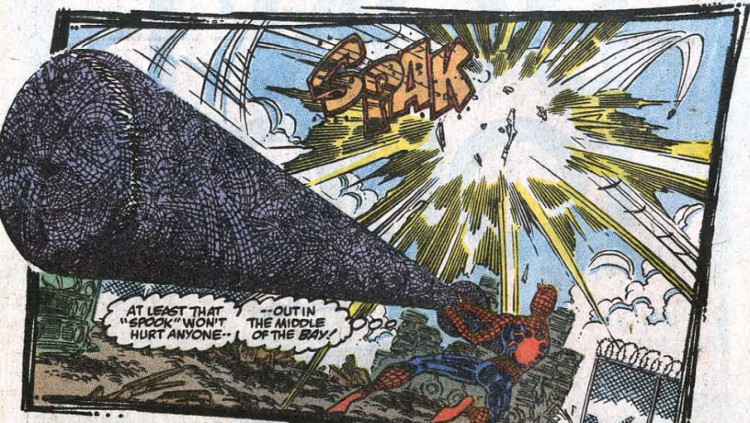 Other fights were entertaining, to a point. I didn’t necessarily mind the concepts behind them--the Trapster deserved to be utterly trounced, as did vendetta-driven Titania--but Spidey relying on laser blasts to confound his quirky sparring partners felt off-brand. Here, Spidey feels like he’s channeling his new cosmic powers to enhance the potential he already possessed.

And then he starts flying.

The moment sucks me out of the story, again, because it’s completely not-Spider-Man. I get the idea that these new powers have created a hero you actually want to root for. As I pointed out before, Spidey exists in the same weight class as the Hulk or Thor now. But, but, but...he existed in that class prior to flying. The Superman parallels are never stronger than when he’s hovering the air, a moment exacerbated by the fact that he gains complete mastery over his plane-like propulsion immediately. No errors, no foul-ups, no mistakes. Spidey just flies. 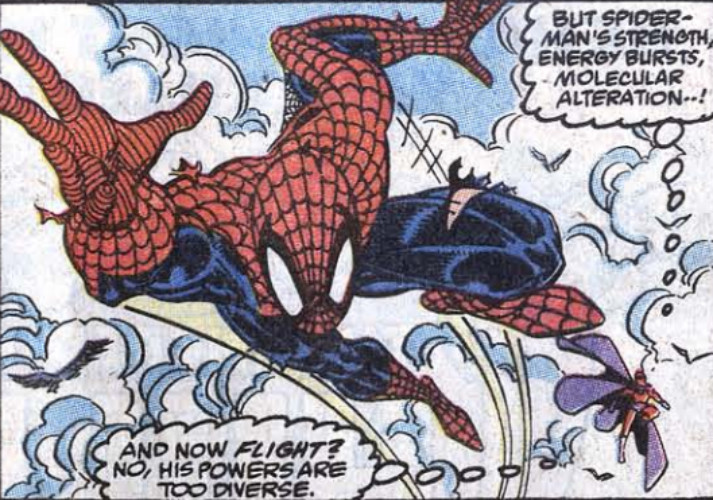 I like that Spidey’s stronger. I like that he’s got greater control over his webbing. For a brief segment of this issue, the guy becomes pretty much perfect in utilizing his own powers. That’s fine. He’s just a better Spider-Man. But laser blasts? Flight? It’s all a bit much. And Spidey’s “Ah, well, darn it all” comment doesn’t necessarily help either. If this were, say, Micheline’s way of commenting on the hilarity or ridiculousness of the situation--Spidey as Superman analogue--that’d be dandy. For a second, it almost seems to go that way. Yet, you then recall Micheline’s the man who’s placed him in this situation and that commenting on such an action without making a point out of it is absolutely fruitless.

More powerful comes a later moment, where Spidey realizes that the car he batted earlier has struck a nearby cruise ship. Micheline admirably strives to assign a healthy level of responsibility to Spidey, which I’ve noted works to balance out his power increase. Spidey, initially oblivious to his own actions, utilizes his new abilities to rescue the people he originally put in danger. Maybe to some the sequence comes across as a cliche “hero accidentally puts people in danger and learns lesson after saving them” moment, but to me, it notes the first time in this little run of “Cosmic Spidey” comics were our hero is struck with the deep revelation of the weight he carries. Sure, he can heft barges and cruise ships, he can blast people through walls...but that doesn’t change the nature of who he is. Other issues had Spidey, momentarily, reflect upon the possible danger if he utilized these powers irresponsibly; Micheline brings the notion to the fore. 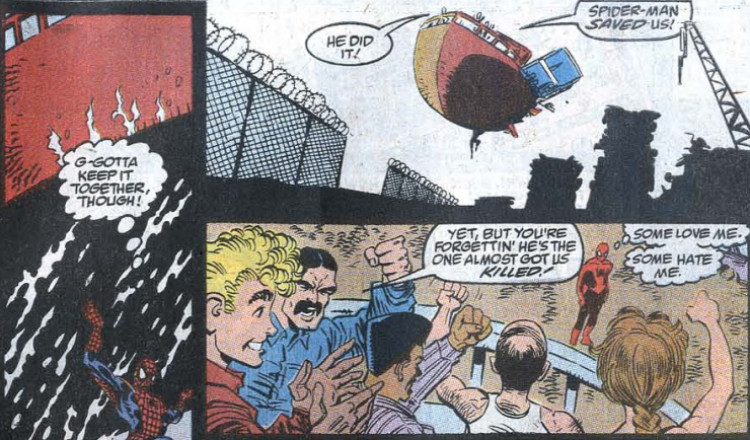 If this is the point to the narrative--to showcase Spidey as the same human, admirable, responsible hero he’s ever been, just with a temporarily super-celluar facelift--this moment cements that point better than any before it. I don’t believe for a second that the writers intended to make Spidey “go cosmic” forever. Much like other alterations to the character and his history, like the time Doc Ock swapped minds with Peter Parker or when the seemingly dead Gwen Stacy returned, this change in the status quo was meant to be fleeting. Yet the concept seems gimmicky. Sure, cool, whatever...give us an empowered Spidey for a short duration, show us what he could be if he could fly or shoot lasers out of his pinky fingers. But as cool as the notion of “Spidey at Thor level” is for fans of the hero, such whimsical fare feels hollow if it’s pointless. Resting “Cosmic Spidey” on the shoulders of his long-suffering responsibility mantra may sound a tad cliche (if you’ve read practically any Spidey comic for any duration of time, you’ll have encountered that particular philosophy), but it’s certainly a weightier supposition than “Let’s have Spidey beat up Magneto.” Larsen may make the idea look cool, but without the grander narrative at play, all you’ve got are some pretty pictures.