Spider-view: “The Paste and the Power” (Cosmic Spider-Man, Part 1) 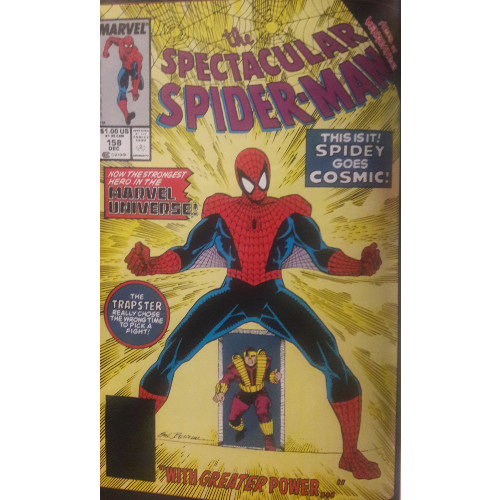 This post formally debuts a mini-series of blogs I am dubbing the “Cosmic Spider-Man Saga” (and, technically, kicked off in my last post) Over the next several blogs, we’ll be taking a look at an arc that ran through Spidey’s three comic series--Amazing Spider-Man, Spectacular Spider-Man, and Web of Spider-Man--that saw the Web-Head receive a major power boost. From the little I remember reading about this time period in Spidey history, fans were divided over what exactly happens during this mini-“saga.”

I assume the reason for fan vitriol is that the core concept of this story arc dynamically changes Spidey’s character. As reactions to arcs such as “The Clone Saga” and “Superior Spider-Man,” or even smaller stories such as “The Night Gwen Stacy Died” and “One More Day,” can attest, fans tend to look askance at stories that radically alter who Spidey is. I acknowledge my own grim reactions toward “Superior,” and though my viewpoint on the story has altered over time, I still hold a bit of unease towards the general concept.

Spidey is Spidey. Spidey is Peter Parker. And Peter Parker is a regular guy who shoots webs, not lasers, out of his hands. And when you mess with or upend that primary definition, the nerds grab their pitchforks and metal tentacles and take to the inter-webs to shriek in despair and discord.

But I’m here more for the story than fandom rages. I’m here to see whether it was a good idea for Marvel to temporarily transform their Friendly Neighborhood Web-Swinger into a hero more akin to Superman that Spider-Man

“The Paste and the Power”

Subtitled “A Very Sticky Situation,” this single issue story brings back classic Spider-Man villain the Trapster (who, as he repeatedly reminds his adversaries, doesn’t go by “Paste-Pot Pete” anymore, so get the name right, dang it!) as a part of the ongoing “Acts of Vengeance” story arc. This means that by “classic,” I actually mean “incredibly infrequent,” as the Trapster has historically pursued a vendetta against the Human Torch. I feel certain in saying that Conway is, largely, having a bit of fun at the Trapster’s expense by pitting him against Spidey. He played a similar game with Boomerang a handful of issues ago, pitting our Web-Head hero against a villain so far below his league that their conflict was almost comical.

Conway excelled at displaying Boomerang’s bizarre overconfidence by having the baseball-player-turned-mercenary rant and rave about his excellence while actually allowing the villain a moment or two in the spotlight before dropping the brutal reality on his head that he was still a boomerang-hurling loser. He pulls much the same trick here with Trapster. You’ve got this guy who is so self-conscious about his former codename and the loser status attached to it, he’s actively reminding people he’s longer the same jerk with a massive Elmer’s Glue gun. And much like Boomerang, he also receives his shining moment, however brief. Trapster successfully coats Spidey in a stream of paste, allowing it to mold over and harden around our hero. 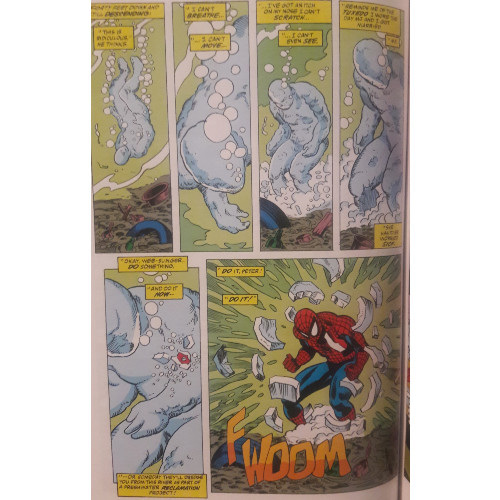 Fantastically, this sequence only lets Spidey flex his own dramatic muscles, quite literally as he breaks free from Trapster’s trap. The moment certainly stands out in the issue, as our hero sinks to the bottom of a river, straining against the hardening substance. Muscles tense as he struggles and finally bursts through the paste, saving himself from a watery grave (interestingly, unbeknownst to the other, pastier Pete). Conway, after setting up a seemingly decisive victory for our hero’s hapless assailant, turns the tables in a way that, though certainly predictable, is also satisfying and engagingly action-packed.

A good chunk of Conway’s issue deals with starting off this “Cosmic Spider-Man” story arc. While working on a graduate study project, Peter is zapped by energy when one of his mentor’s inventions goes awry. In a seeming replication of the event that caused his origin--Peter becomes whammied with some kind of radiation--Spidey gains brand-new dimensions to his abilities. Chief among these, according to this issue at least, is enhanced durability and the power to shoot lasers from his fingers. More abilities will emerge with time. 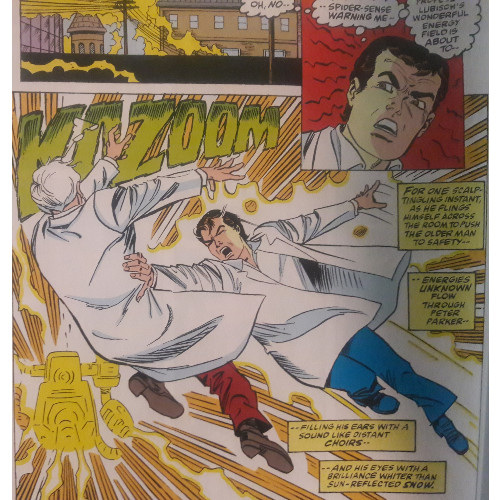 The shift is a highly bizarre one and, when compared to other changes in Spidey’s history, doesn’t seem to be one that fans often discuss. It’s hard to call the concept “underrated” just because it seems to often go unspoken. “Underrated” would imply the story is deserving of more praise that it receives, and according to my forays into the wider “Spidey fanbase,” I don’t often see this arc tossed around. Part of it may be because the shift is so inherently anti-Spidey: the guy who’s always been the underdog becomes a triumphant winner with his massively enhanced strength; the guy who’s typically the down-to-earth hero who’s relied on his own inventions on top of his abilities gains even more incredible powers. The status quo is fundamentally altered as Spidey completely changes his weight class (as we’ll see down the line, he’s a heavyweight).

Conway, wisely, plays with the notion of Spidey coming into his grand new abilities and, to an extent, allows his newfound powers to be more extensions of his already-existing skills. His strength and Spider-sense are enhanced greatly, the latter to the point where he has to shut out certain noises like Daredevil. His durability is increased to the point where he grabs a flailing live wire without injury. Conway decently explores Peter learning about and coping with these new abilities. His penchant for strong characterization in this issue not only playfully dwarfs the menace of Trapster when compared to Spidey’s power upgrade but allows Peter to reflect upon these new abilities. 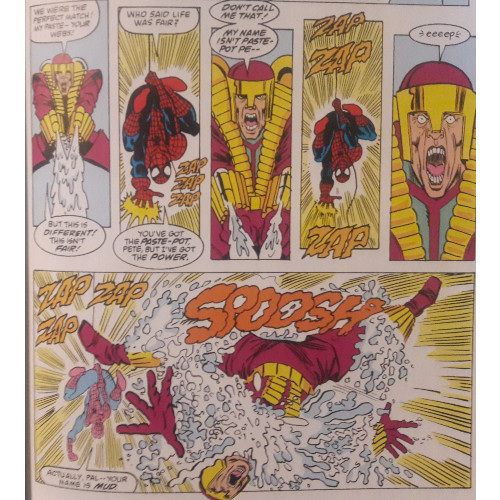 When our hero develops abilities akin to his own powers, the “Cosmic Spider-Man” concept works fairly well. He’s merely an upgraded Spidey, not a whole different hero. Yet even in this issue, and in others down the line, he utilizes skills less familiar to fans. His fingers spew lasers, for one, and while they catch the Trapster off-guard, they may also blindside readers. Perhaps the most problematic element of these new abilities is how sporadic they are. If you simply increased the powers Spidey already utilized regularly, I’d understand. He’d simply be a stronger, better Spider-Man. But tossing in new powers like energy-firing fingers feels random, like you’re making a casserole of leftovers. Conway just throws something into the pot and runs with it, no questions asked because he gives no leeway to wonder. Even the origins behind this upgrade are random--the malfunctioning machine is intended to tap an “unknown energy source,” which indicates even Conway wasn’t quite so sure what exactly he was playing with. Other than being some kind of “cosmic energy” (which I only know because the cover claims that “Spidey Goes Cosmic!” in this issue, not necessarily because of what anyone says or indicates verbally), the energies Spidey’s imbued with remain vague.

In the background, Conway also takes time to briefly remark on Robbie Robertson’s situation. Since we last looked at Robbie’s plight, he’d been incarcerated for obstruction of justice; failing to report on former childhood bully/hitman Tombstone’s gangland murders, Robbie is unceremoniously dumped in prison, the system throwing in a bit of poetic injustice by placing him in the cell next to Tombstone’s. In the time since, Robbie unwillingly played a role in a riot instigated by his albino buddy, calling into question his appeal for freedom. Conway only has a little time to maneuver through these legal proceedings, but he nicely offers Robbie a hint of hope. Due to the lack of SSM issues I own, I was unable to bridge the gap between Robbie’s sentencing and this issue; though I missed the riot, I am more than happy to see how Conway continued weaving Robbie’s arc through his run. 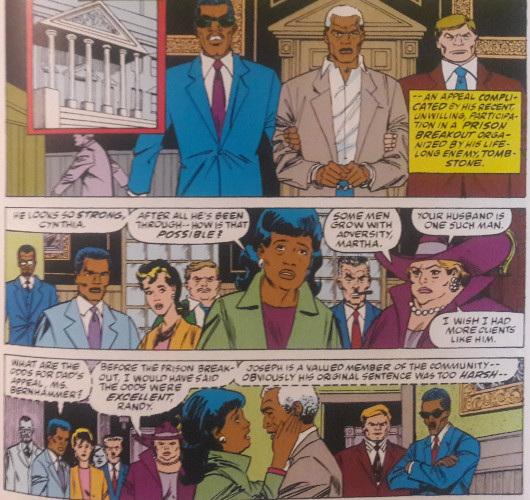 Conway does a lot in this issue, packing it not only with the “Cosmic Spider-Man” arc and Robbie’s situation, but also adding in a nice conflict between the Trapster and Spidey. One blogger I read commented on how, finally, Spidey received a power boost to make him a little stronger, a little tougher, a little more invulnerable. Sure, he could go toe-toe-toe against other guys, but could he beat them as cleanly, as definitively? This issue delivers a Spider-Man with the power to match the immersive responsibility he constantly burdens himself with. Maybe the randomness of the situation doesn’t always work, but at its core, we’re given a hero who can certainly mark some tallys in the “win” column.