This issue starts a small arc with promise, obscuring the quality of future issues with well-written character moments between action sequences 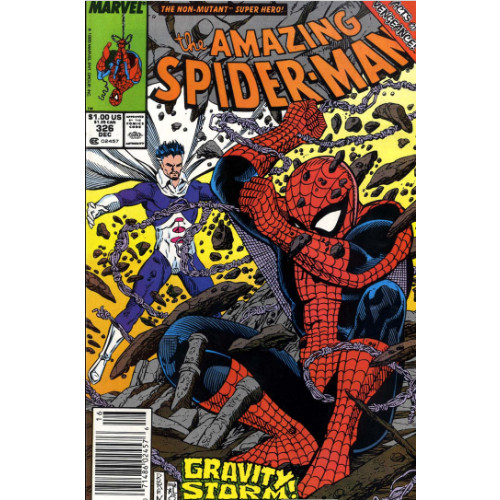 Several months ago, I wrapped up a series of blogs on the “Alien Costume Saga,” a narrative arc which saw Spider-Man almost become possessed by an “outfit” he discovered on the Beyonder’s Battleworld. Turns out, his new threads were actually a living parasite seeking to permanently bond with its host; Peter repelled this creepy crawly costume, letting the alien slink off and partner with Eddie Brock, aka “Venom.” Writing so many consecutive posts on one larger arc was an interesting experiment, and while it could occasionally feel repetitive, the “Alien Costume Saga” posts really spoke to the ideas I’m attempting to convey with this blog series: taking a linear look at the life of one Peter Parker and how it changes over time.

At the moment, I’m in no position to be as consecutive as I was with the “Saga.” My collection has gaps, holes, pieces I wasn’t sure I wanted to write on. As I mentioned way back in my introductory post, the idea is to write about more successive stories once I reach the “Clone Saga.” But for now, I’ll tackle what stories I can. Originally, I had no plans to pursue this “Cosmic Spider-Man Saga,” as I’ll call it. I purchased an Epic Collection simply to review the annuals. Yet as I started reading issues, I decided, Know what? Let’s give this a shot. I’ve got a few volumes I’m hoping to work my way through, so while gaps will persist, I’m just gonna write on what I’ve got. It’s all I can really expect of myself, right? 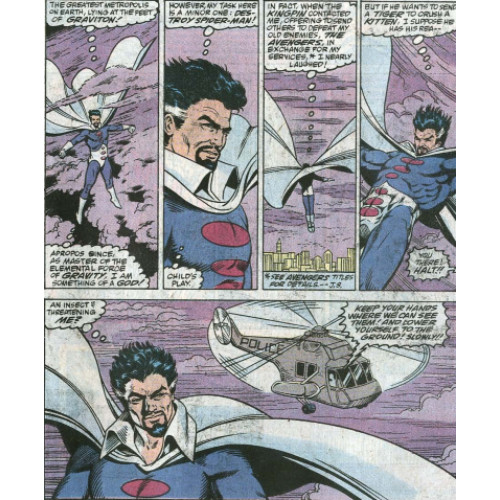 Our favorite couple, Peter and MJ, have been through quite a bit already in their first months of marriage. The Puma sabotaged their honeymoon. Peter was kidnapped by Kraven the Hunter and buried alive. A symbiote-clad Eddie Brock seriously scared the bejeebers out of poor MJ. And, in a series of issues I did not review, MJ was kidnapped by an insane apartment complex owner, Jonathan Caesar, who owned the previous building where the Parkers lived.

Our issue opens, thankfully, with a happier moment for the two, a homecoming bash where Peter and MJ are joined by friends such as Flash Thompson and Harry and Liz Osborn. The scene is a nice “snapshot” for those of us who have been moving through these stories chronologically. Last time I made any mention of the Parkers’ living situation, I referenced MJ’s worried state over her husband’s disappearance after Kraven drugged him. At that time, they lived in a wholly different building, moving into Caesar’s Bedford Towers before the madman kidnapped MJ. Now, the two have transitioned into an apartment in Soho, celebrating their move-in with loved ones.

Bits and pieces like this scene--a homecoming party--may seem unimportant to Spidey’s activities overall, but they’re actually quite ingenious. Writer David Michelinie actively thought out how to handle Peter and MJ’s living situation and introduce some tension, whether through Caesar’s machinations or the genuine struggle with finding a new home to inhabit. This party marks a new start for the couple, a celebration of accomplishment after the two are tested with providing themselves new “digs.” One of the more relatable aspects of Peter as a character, and by extension his wife, is his undaunted spirit and ability to rise about whatever circumstances get lobbed at him. Fired from work? Find a new job. Kicked out of his apartment? Find a new home. And throw a party once he and MJ have moved in because, darn it, don’t they deserve at least a hint of peace and security amidst the insanity that is living within the Spider-sphere?

Michelinie’s narrative ties into the “Acts of Vengeance” crossover, which sees several villains (such as Kingpin, Dr. Doom, and Magneto) join forces and decide the best way to defeat their arch foes is by attacking their enemies through villains the heroes aren’t familiar with. Why have Spidey trounce the Rhino for the thousandth time when you could let somebody like Graviton get in on the fun? Guy can increase or decrease gravity, so hey, maybe he’s got a shot at, I don’t know, pancaking Spidey into the ground? 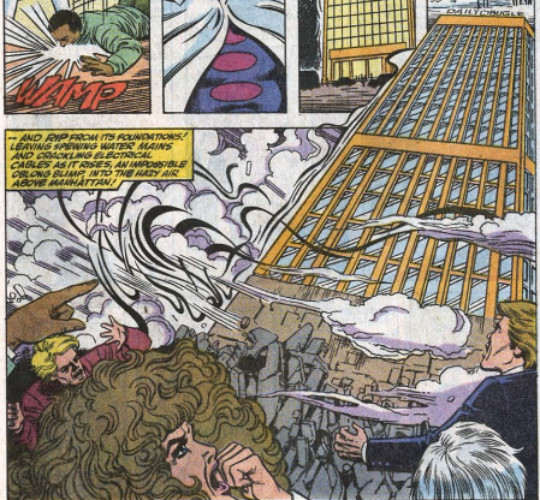 Engaging as the idea is from a narrative standpoint, and as amusing as it might be to have heroes face villains they don’t tussle with often, Michelinie doesn’t do a whole lot with the concept. This is an idea that he and a few other writers will play with over a handful of issues, and as I read them, I saw the idea generally became the same: sicc infrequent or unknown supervillain on Spidey, throw him a mental curveball, then watch him beat his newfound foe senseless once he gets his bearings.

The battle between Spidey and Graviton, therefore, doesn’t feel all that special or unique, save some entertaining visuals by Colleen Doran. Graviton rips the Daily Bugle out of the ground in one surprising moment, a genuinely well-scripted sequence with a final flourish as Doran has Graviton tear the newspaper publishing house from its concrete moorings. The battle culminates in Spidey saving the life of one particularly nauseating coworker, a paparazzo named Nick Katzenberg, in a nice effect by Michelinie to remind us how human yet heroic Spidey is. Yet most of the battle itself feels a little pointless, especially as Graviton just flees the scene in stereotypical “I can’t see the hero under the rubble, so he must be dead” fashion. If anything, the fight leaves Spidey a tad dejected, perhaps some foreshadowing of the upcoming “Cosmic” story arc in future issues. 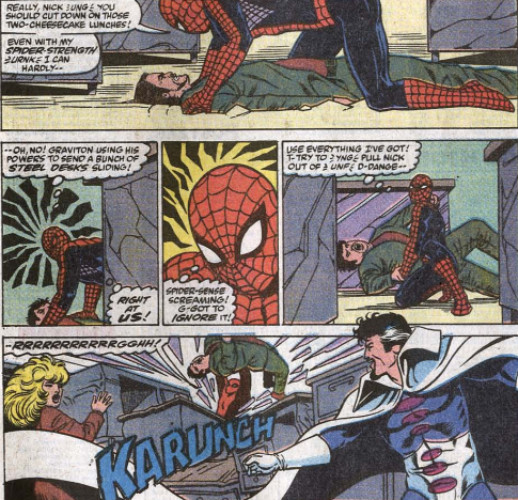 Where Michelinie excels are the little character moments he nicely injects into the whole issue. Each sequence seems to have some nice segments between characters. Aunt May and Peter talk about Nathan Lubensky and her other boarders, particularly those moving out. Peter comforts MJ after she receives a haunting note from Jonathan Caesar, Michelinie promising the lingering spectre of MJ’s kidnapper. Flash Thompson’s date spouts off political mumbo-jumbo, further proving the poor lout’s inability to find a stable relationship.

The issue also allowed me to take stock of Peter’s current situation outside of just his living quarters. By this time, he’s enrolled in graduate studies, and Michelinie takes a moment to have Peter’s dual life as Spidey interfere with his education (when hasn’t it, right?). This, combined with the new apartment, really showcase that Peter’s undergoing good change, growing and becoming an adult. A new wife, new apartment, new studies...fortunately, simultaneously, Michelinie eases our minds with the appearance of the Daily Bugle and the Osborns. Some things are new, but other elements are the same as they’ve always been. 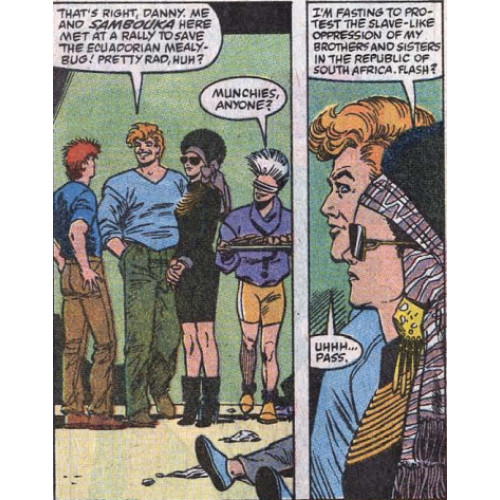 Gone is the boy bitten by the spider. From his shell has come a man who’s still learning responsibility yet knows how to take charge when necessary. Good lessons for our pal to learn, because over the next couple of posts, he’s gonna get some extra power to balance out all that responsibility...maybe more than even Spider-Man can handle.