One of Spidey's worst enemies debuts in this anniversary issue, which holds up wonderfully over three decades later 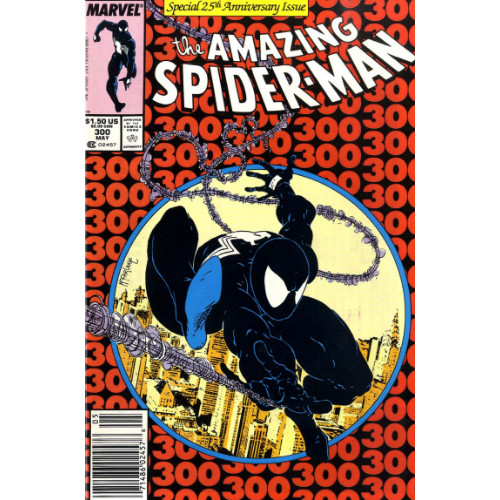 You’d think a hero would catch a break.

I know I’ve skipped over various issues from Spidey’s three different series to highlight particular stories, but even so, our favorite Wall-Crawler has been through a heckuva time lately. Marriage. A burial. The death of friends. A nutty honeymoon. Spidey’s been through an emotional wringer, and just when you think he’d get a chance to slow down, ease into married life, he gets slapped upside the head again. This time, it’s thanks to an old buddy of his who’s found a new friend.

Against all odds, the alien costume has returned. It’s alive! And it’s coming for Spidey’s head. 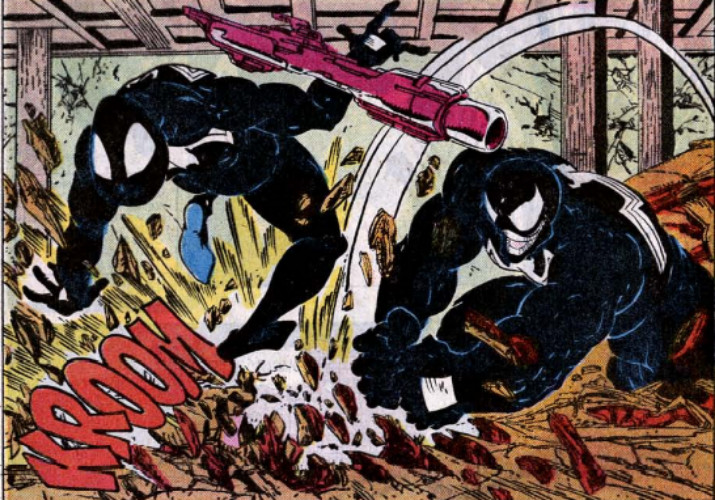 You remember the alien costume, right? The suit Spidey discovered on Battleworld during the first Secret Wars that tried permanently bonding to his body before he got it removed, not once, but twice? Course you do. I wrote about the dang thing for months.

When reading this issue, I did what I could to isolate it from its historical significance in my head, because make no bones about it, this issue is huge. Venom, one of Spidey’s greatest enemies, formed from the merging of jilted symbiote and hate-filled human, debuts in ASM #300. When Eddie Brock and the alien join together, Venom achieves both superior strength and stamina to Spidey and can also negate his spider-sense, all details Michelinie adds here. Looking back on this issue thirty-two years after its publication, I wonder how Michelinie and McFarlane viewed their villainous creation. Was there any concept that he’d become as popular as he is? Who knows? Historically, this issue holds a lot, and a good chunk of Spidey comics and other media in the years since 1988 owe this story a debt of gratitude. 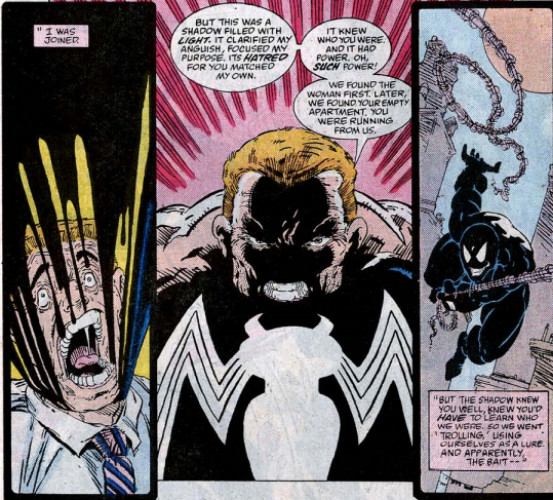 The idea is certainly clever. “Hey, what if the old alien costume that Spidey thought he’d destroyed in Web of Spider-Man #1 wasn’t actually gone for good? And what if it hated Spidey as a result of his dual rejection? And what if it found another host?” That’s some fascinating character work done for a costume. Louise Simonson is the writer, in my mind, who did the most to turn the symbiote into a character following the revelation that the costume was actually a living alien. WSM #1 gave the costume somewhat of a personality, imbuing the outfit with rage and a vengeful spirit, driven by its newfound hatred for our webbed buddy. Michelinie steps in, looks at the ending of the “Alien Costume Saga,” and seemingly realizes a highly natural way for the story to go if only the alien was still alive. And, nicely, he doesn’t spend much time on that aspect either. It’s just...alive. It simply survived the bells Spidey used to try and kill it, slinking off to lick its wounds in the church before stumbling across Eddie Brock.

Brock himself is interesting, primarily for how differently he is depicted here than he is later portrayed (or has been portrayed in recent years). I think, specifically because Venom has become such a cultural cornerstone within the Spidey mythos, I had never given much thought to the character’s creation. “Venom” and “Eddie Brock” kind of always just existed in my mind when considering the Spider-Man universe. But even though the symbiote existed long before this issue and returns with all its hatred intact, Brock is a brand-new creation. As I read the issue, I wondered about another avenue Michelinie could have gone down: he could had the symbiote attach itself to someone Spidey already knew, like Harry Osborn (kind of like what Dan Slott did with Norman Osborn and the Carnage symbiote a few years ago). That would have given the Venom/Spidey conflict a different ring, certainly. But because Brock is a new character in this issue, that conflict doesn’t exist. Michelinie has to craft it from scratch and does a decent job, weaving a tale of misinterpreted anger that’s attached to one of Spidey’s most popular stories: “The Death of Jean DeWolff”. 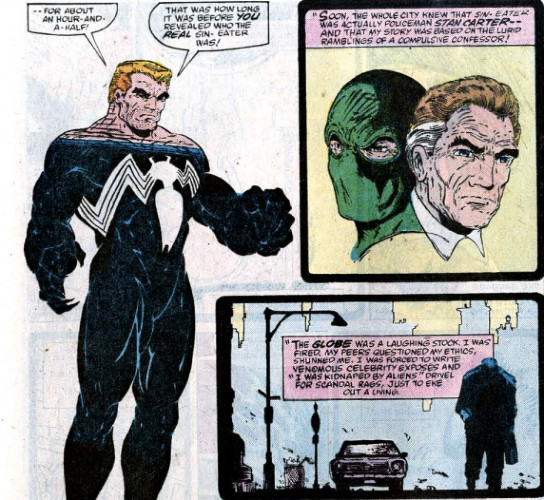 Michelinie’s decision to tether Brock’s “woeful” backstory to Peter David’s classic narrative gives Brock that personal infusion of anger he lacks by being an original character. David, of course, never seeded Brock--a former news reporter who was fired after incorrectly revealing the wrong man as the Sin-Eater--or even the idea of Brock in his original story; that’s all Michelinie. Even so, Michelinie retroactively adds a layer to DOJDW that organically works within that story’s framework. Just because we were never introduced to a disgruntled reporter who revealed the wrong killer in David’s story doesn’t mean it couldn't have happened. So though Brock isn’t a character we’ve been previously introduced to, his connection to recent Spidey history makes at least the circumstances around his situation familiar and plausible. He’s not just some random Joe off the street who happened to bump into Spidey’s former goopy outfit.

Michelinie also works in some additional aspects to the symbiote which did not exist during the “Alien Costume Saga.” Venom is capable of blocking out Spidey’s spider-sense, therefore not warning him of any attacks. Additionally, as Spidey discovers late in the issue, the symbiote has already fused more permanently with Brock than it did with our hero, meaning Spidey’s reliance on sonic technology is not as advantageous as it once was. By introducing these components, Michelinie ends up giving some fairly logical (in the comic book sense of the word) reasons as to why Venom is such a superior foe. Again, there’s this real sense that Micheliene is building on what other writers, including Simonson and Tom DeFalco, crafted before him, widening the symbiote’s capabilities and allowing it evolve as a villain. Suddenly, the benefits Spidey possessed wearing the symbiote--including certain camouflage features--are turned against him in brutal fashion. 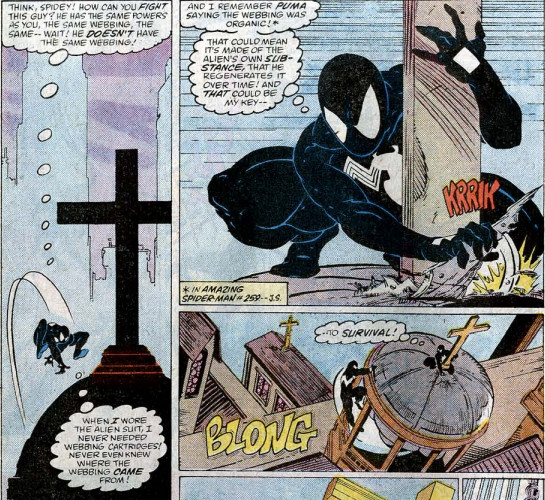 This leads to perhaps the most interesting revelation Michelinie works in: that the symbiote’s organic webbing is part of the symbiote himself. DeFalco, in *ASM #257, had worked in a similar presence while Spidey fought the Puma, yet he never returned to the notion to explain what the exact meaning of this statement was. Michelinie, however, decides to run with it, basically explaining that the symbiote generates its own webbing and must thus keep it “in reserve.” I had completely forgotten DeFalco’s idea, meaning I was particularly impressed that Michelinie had done his research and decided to include this seemingly neglected fact.

Fight scenes between Spidey and Venom pepper the issue, highlighted by the crisp artwork of Todd McFarlane. Only McFarlane’s third issue of the series, ASM #300 is bolstered by the man’s detailed linework and fluidity as he crafts brutal moment after moment. Venom and Spidey trading blows is fun enough, but when McFarlane starts playing with webbing, that’s when things get good. His intricate woven design for Spidey's webbing becomes a staple the artist regularly uses, and one particular scene that sees Venom yank a fleeing Spidey back into a building is rendered gorgeously. Pieces of wall sail in all directions, and you can just feel both the motion and the impact. Ouch. 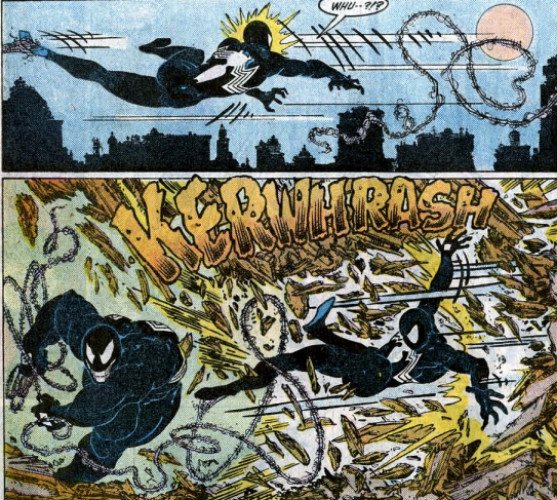 Venom has become a fixture in the Spidey universe, for good reason. Some complain his presence became a bit more forced as time went on, but one has to look at his debut to see why the villain became so iconic so quickly. He’s got all the good traits of a good supervillain--backstory, intention, power, ruthlessness--and much like Peter, bears a distinguishable identity as both Venom and Eddie Brock. You can tell the thought and preparation Michelinie put into this character, especially as he’s so complexly tethered to the recent past. I plan on focusing on several more Venom or Venom-related stories at intervals over the next several posts, so we’ll get the chance to see his character grow and morph as time allows. He won’t always be the same character, but for now, he’s a dark new addition to Spidey’s rogue gallery, wonderfully introduced by the Michelinie/McFarlane team.