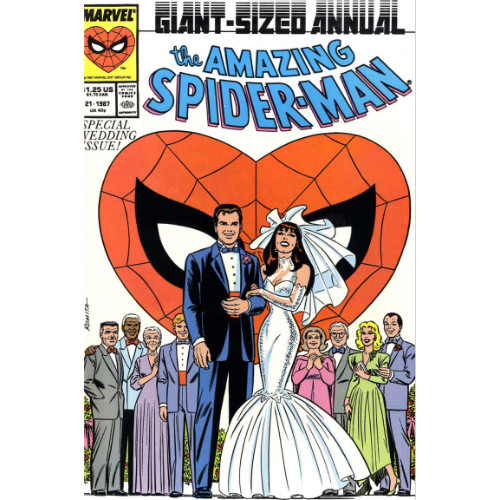 Back in 2006, my dad told me he’d heard that Marvel was going to dissolve one of their most famous, important marriages--the union between Peter Parker and Mary Jane Watson Parker. I was aghast. To this day, I look upon the subsequent story arc, “One More Day” as an annulment, of not just a long-standing comics' universe marriage, but two decades’ worth of stories and character growth. I don’t loathe the tale as much as other fans--a few folks quit Spidey comics completely because of it--and I usually reserve my vitriol for the highly unnecessary sequel, “One Moment in Time” (in my opinion, perhaps the single worst Spidey comic of all time); nevertheless, “One More Day” is a stain on Spidey’s history, soaking MJ’s gorgeous wedding dress in a mire of symbiotic black ink.

Way before “One More Day” was even a glimmer in editor Joe Quesada’s eye, however, wedding bells were peeling. Back in 1987, Mr. Parker and Ms. Watson were hitched. I’ve touched briefly on their relationship, primarily discussing an issue where MJ and Peter decided to remain friends and not become entangled in romantic interests. Yet, the two found their way back to each other, and this issue cements their dedication...even if it ultimately wasn’t ‘til death did them part. 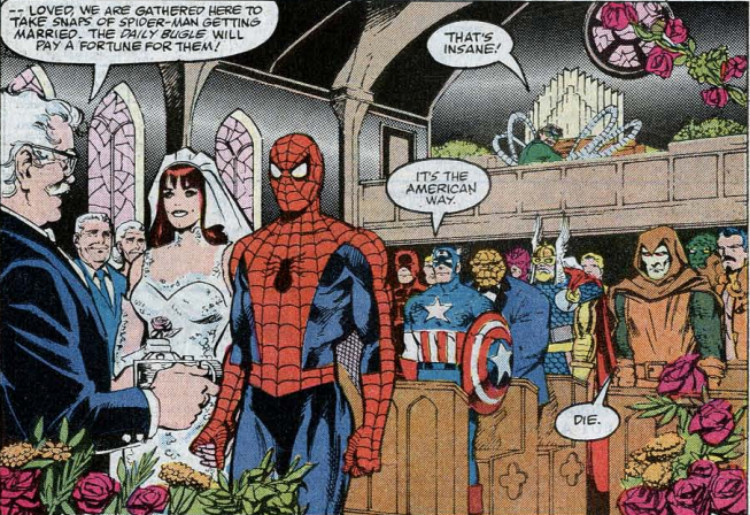 How to make a Spider-Man wedding cake:

Michelinie’s narrative works as well as it does because the writer is focused on crafting a strong Spider-Man story, not just a one-off wedding issue. Michelinie pulls in so many different Spidey-centric elements for this annual, weaving them all fantastically together while making sure he gets from Point A to Point B. Spidey battles Electro in the issue's opening pages, so you’ve got your thrilling hero/villain fight sequence out of the way. Peter wrestles with doubts about his upcoming nuptials, injecting that classic element of having our hero struggle with just about every decision he’s ever made. Supporting cast members like J. Jonah Jameson, Flash Thompson, Betty Brant, and Aunt May wander in and out of the issue, giving the annual a very connected feel. This isn’t just another one-off annual where Spidey randomly fights another one-off bad guy; this is perhaps the biggest, most important day in his entire life. Everyone’s here to participate in the frivolities.

Start to finish, Michelinie crafts an impressive story about relationships, not only reflecting on how far Peter and MJ have come but stressing how important they will be to each other for their future together. When Peter isn’t fixated on his creeping doubts, he’s head-over-heels with his bride-to-be; when she isn’t questioning her decision to leave her partying lifestyle behind, MJ is fully supportive of her fiance and excited for their life together to begin. Seemingly mundane responsibilities--telling Aunt May and MJ’s Aunt Anna the news, MJ finding a dress, getting a marriage license, Peter showing MJ the ring he picked out--are transformed into wonderful story bits. Real change happens in this issue, and perhaps a part of why Michelinie writes each moment so well is because the whole thing feels “real.” As someone who knows people who have either been recently married or are engaged (shout-out to friends and family!), I see some of the same joy in their eyes that penciler Paul Ryan inserts into his characters.

You get a real sense that Michelinie sat down and genuinely considered all the different possibilities and story beats he could add to this tale, jotting them down or figuring out how to insert each sequence. A brief moment where Peter lovingly remembers his first true love, Gwen Stacy, is not only a powerful homage to the past (particularly, the Gerry Conway-penned “The Night Gwen Stacy Died”) but an insightful view into how far Peter has come since Gwen's death. A few pages late in the story see Peter swing MJ through the city, a beautiful way of bridging their two worlds in a unique method only Peter could provide her. A subplot where another man fruitlessly attempts to lure MJ away from her future marriage highlights MJ’s faithfulness to Peter and her own staunch resolve to fight for their happiness. 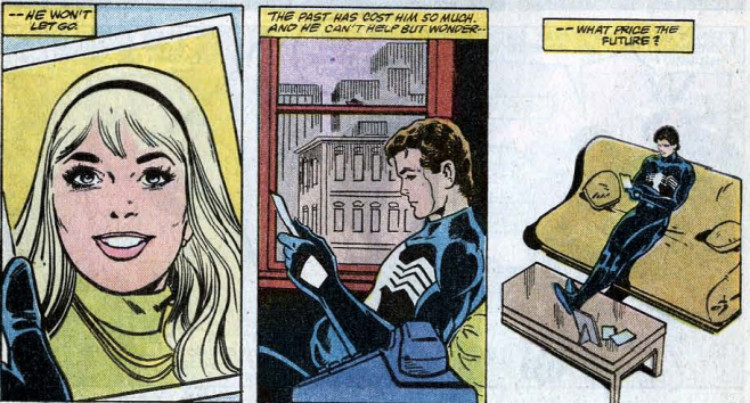 The story itself is highly engaging, but Michelinie’s dialogue is also to be praised. Michelinie peppers the annual with nuggets of wisdom, and some of his quotes reflect a very clear picture of what marriage should be. “Once you say ‘I do’ there’s no turning back,” Jameson (who was married himself in an earlier annual) tells Peter, stressing the lifelong commitment Peter and MJ are making to one another. “I think about being married all the time!” Flash Thompson admits to Peter in a moment of startling vulnerability. Reflecting on his relational mistakes, Flash continues, “My foul-ups have made that kind of happiness even more desirable, more precious!” He encourages Peter to pursue the wedding, despite his friend’s insecurities. When MJ mentions how their life together will last “forever,” Peter muses, I never really thought of it like that. In that moment, the weight, the responsibility of the vows he will soon utter bears upon him. The upcoming "I do"s become real.

Michelinie, through these dialogue options, weighs just how exciting, permanent, frightening, and joyful marriage can be. His characters are genuine in their attitudes towards the forthcoming ceremony. A more vanilla story would have seen characters constantly cheering on the couple, with nobody doubting, nobody wondering, nobody considering the potential risks and rewards. Conflict curls like a viper around our young protagonists, but--and I feel the need to stress this--any moment of emotional hostility points to one thing: Peter and MJ’s faithfulness to one another.

I stress that point for a reason. “One Moment in Time,” written by Joe Quesada in 2010, was used to explain the in-continuity events of “One More Day”; while OMD saw Peter and MJ make a deal with Mephisto to dissolve their marriage, OMIT pointed back to this annual and “revised” events to shape Quesada’s “marriage-less” view of Spidey history. In doing so, Quesada harps on the moments of doubt and indecision created by Michelinie, twisting them into reasons for why Peter and MJ, in this retconned timeline, broke off the wedding.

OMIT didn’t just alter events; it altered intention. In this original annual, Michelinie and Ryan by no means want fans to believe that, just because Peter and MJ occasionally question their future, the couple thinks it better to not get married. Even a subplot that sees Peter start wondering if he should cut ties with MJ ends with Peter choosing his true love over his fear. The moments of indecisiveness are meant to point to the strength of Peter and MJ’s relationship, their willingness to face an unknown future together, not reasons for why they should let that future dematerialize. The doubts make the story’s climax--a full-panel shot of Peter and MJ finally wed, surrounded by loved ones--all the more inspiring and powerful. 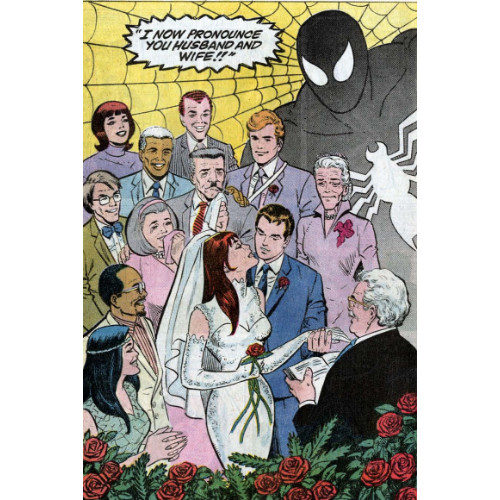 Let’s forget “One More Day” for a moment. Let’s forget “One Moment in Time” (yes, please, for the love of Galactus, LET’S). Let’s forget Marvel once reenacted the story at Shea Stadium during a baseball game as a publicity stunt (with Stan Lee officiating!). If we can isolate this annual for a moment, we can understand how absolutely huge it is. Spider-Man. Married. The story impacted two whole decades of comic book history, influencing not only Peter’s character but MJ’s and several other individuals. That can’t be undone, retcons be hanged. What’s written on the pages cannot be altered, no matter how amorphous comic book history claims to be. And once you get past the premise, you find the issue itself runs incredibly deep. References to past continuity collide with strong messages about love and marriage--imagine such an issue being published today!--that make this annual a worthwhile read. This one’s a piece of history, even if it’s been stepped on by creators in the years since.