Spider-view: “Wake Me Up, I Gotta be Dreaming” 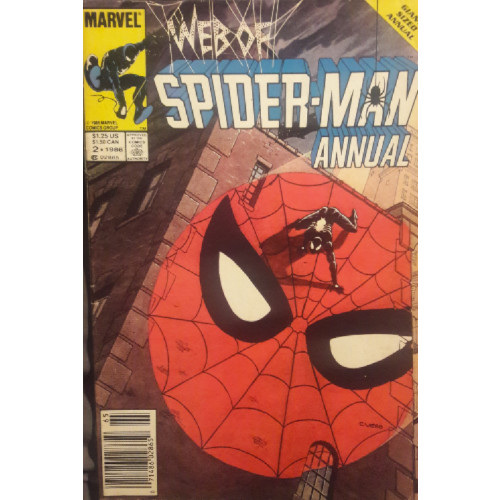 Through our recent trek across annual issues, we’ve seen Spidey go up against a variety of foes, most of whom were perfectly human. Web of Spider-Man Annual #1 saw Spidey battle a conman equipped with an iron suit. Peter Parker, the Spectacular Spider-Man Annual #5 saw Spidey go hand-to-hand with a surprisingly formidable street tough. Amazing Spider-Man Annual #19 pitted Spidey (and Mary Jane Watson!) against the goofy Alistair Smythe, an inventor with an all-new, all-deadly Spider Slayer.

There’s something to be said about our writers’ reliance on human foes instead of superhuman enemies in recent stories. No Green Goblins, Rhinos, Sandmen, Shockers, or Doctors Octopuses have sprawled onto the page. Perhaps, for these one-shot stories, writers feel like inserting a brief primary antagonist instead of focusing on classic villains is an easier way to go. If you’re going to tell a decent one-and-done, isn’t it more fun to come up with a unique idea rather than rely on the past?

Such a philosophy pervades our next annual, the second in the Web of Spider-Man series. I can’t tell you all that has happened between the first and second annuals, but fear not: this lack of continuity should not hinder the reading experience. Our first annual examined the plight of a young boy afflicted with an illness and blessed with an imaginative genius...and, wouldn’t you know it, this issue takes the empathetic route as well.

“Wake Me Up, I Gotta be Dreaming” 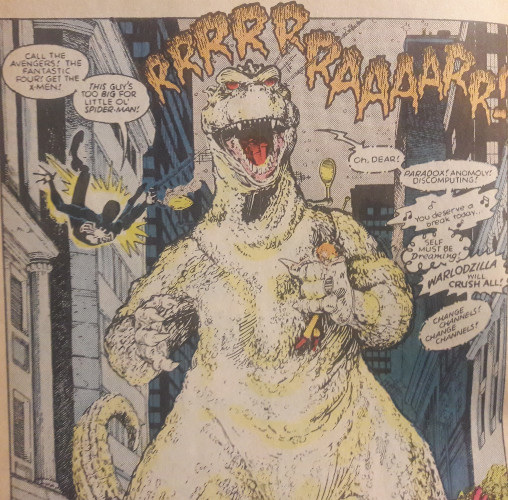 I’ve been reading a lot of X-Men lately--and I mean A LOT of X-Men--and have reached the point in my explorations where writer Chris Claremont debuted the New Mutants, a team of teenage heroes that (in my own humble opinion) sought to capitalize off the popularity of Claremont’s X-Men team while starring heroes who were relatively the same age as Stan Lee and Jack Kirby’s original group of misfits. Heck, in past blogs, we’ve already taken a gander (or two or three) at various adventures starring these young whippersnappers. Guess it’s high time for another.

Nocenti highlights the New Mutant Warlock for this issue (not to be confused with cosmic hero Adam Warlock), doing her best to tug on the heartstrings the same way she worked to endear Max to audiences in the first WSM annual. Fortunately for her, Warlock was already an established character by time this issue saw print, meaning Nocenti could forego contributing any unnecessary background or excuse any seemingly unnecessary details; one complaint I had about the first annual was that Nocenti skimped on details that may have been interesting to the reader. No fear of that here. 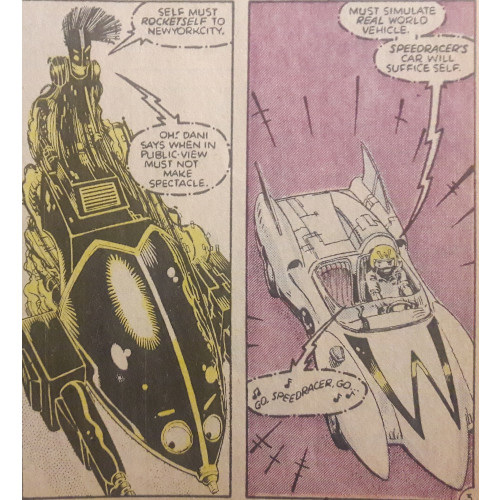 I know almost nothing about Warlock, but I found Nocenti’s portrayal of him interesting. The guy’s a mechanical alien who, from the brief info I read on him, relies on draining organic constructs of their “lifeglow” for sustenance and survival. Kinda like a mini-Galactus. Still, he seems to be the one compassionate member of his alien race, joining the New Mutants at some point. Nocenti utilizes the “lifeglow draining” pieces sparingly, which is good. The annoying part about characters who need some sort of “energy” or “life” to live--I’m looking at you Cloak and Morbius the Living Vampire--is that their insatiable hunger becomes repetitive. You can only watch Morbius bite down on someone’s neck a certain number of times before the whole shtick loses its uniqueness.

What Nocenti does correctly is present Warlock as “out of touch,” as it were. Here’s an alien with a limited vocabulary, maybe kinda like an ET ripoff, who has to become acquainted with Earth and its occupants. A wonderful running gag through the whole issue sees Warlock adapt to our world via the medium of television. Before driving into New York City, Warlock determines he needs a car, selecting Speed Racer’s Mach Five as a suitable mode of conveyance. Upon absorbing energy, Warlock is forced to grow in size, taking on the forms of Godzilla and later King Kong in a highly impressive sequence by Art Adams. Oddly enough, this “connection” between Warlock and our world shows an interesting “disconnect”: since Warlock’s main understanding of Earth is through highly fictionalized television images, he fails to realize how awkwardly those images translate to tangible reality when trying to duplicate them. When he needs a car, he constructs the first one he imagines--the Mach Five--believing it to be a perfectly reasonable choice and not realizing how odd the sight of Speed Racer’s fake automobile must look screaming down the highway. 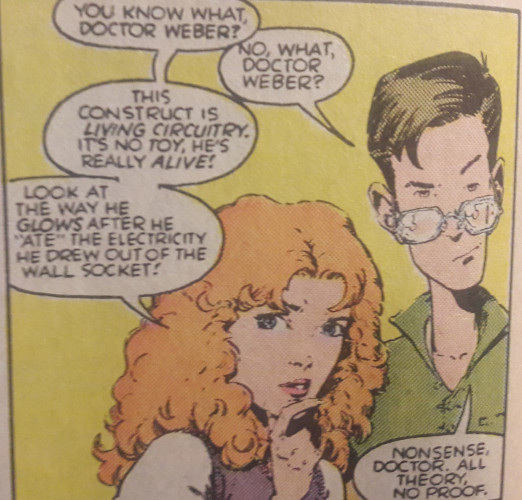 Elsewhere, Nocenti adds other story elements which blend interestingly with Warlock’s story. A scientist couple--a husband and wife team who refer to each other as “Doctor Weber”--are introduced as the “villains” of the piece, misguided geniuses who use Warlock for their own ends. Selfish they may be but their intentions are relatively harmless. Nocenti works to tether their appearance ambitions into the issue’s overarching theme, a thoughtful look at compassion and advancement. Doctor Weber and Doctor Weber, with help from Spidey, soon come to understand the depths of “exploiting” Warlock’s abilities to their own ends, even as Spidey reflects upon an earlier incident where he kept a group of activists from freeing captive animals.

Nocenti juggles these themes surprisingly well, giving both sides credence and not mocking one particular train of thought. When confronting the activists, Spidey argues that the captured animals are being used to study treatments and make advancements in science and medicine; the activities fire back that he should look at how the animals are being treated. Spidey naturally responds that, just because the activists have their convictions, they shouldn’t be breaking into another company’s lab facilities, whether or not the lab is acting unethically. 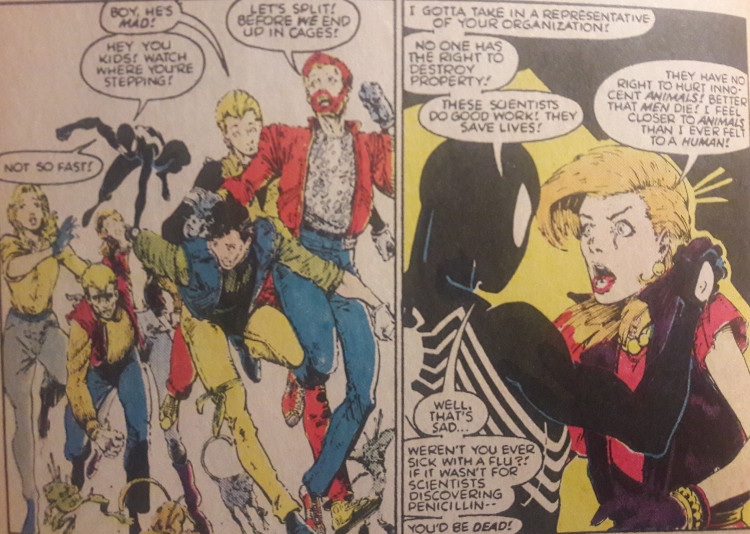 Questions of morality abound: are the scientists really being exploitive? If so, do the activists have a right to break the law to see their brand of justice done? What’s the cost of advancement? Does breaking the law to stop law breakers fully right a wrong? Nocenti injects these questions into Warlock’s story as well, with even Spidey wondering if he’s exploiting the New Mutant by taking photos of Warlock’s Godzilla/King Kong impersonations. At no point do the moral questions seem crude, flat, or heavy-handed, save for perhaps a few dialogue choices. Regardless, the story overall is surprisingly poignant. Again, Nocenti balances the viewpoints, without anyone hauling off and decrying the evils of one side and not letting that particular viewpoint defend themselves.

After wrapping up the main story, Nocenti offers a shorter back-up strip, with some very early Mike Mignola art. The creator of Hellboy can’t do enough to salvage this wonky story, which sees a sleeping Peter Parker undergo a goofy dream sequence. Nocenti yanks in as much recent continuity as possible--the mystery of the Hobgoblin, Peter’s frayed relationship with Black Cat, his conflicts against the Kingpin, his struggles against the symbiote, even his dealings with J. Jonah Jameson--at break-neck speeds. Images bounce hither and yon as Nocenti tries desperately to make an interesting point: the mess Peter’s life has become as he juggles both his superheroics and humanity. The whole short story is too helter-skelter for any one image to stick, save for a bit of dialogue traded between Dream Jonah and Dream Aunt May. “[Peter] can never see his own favorite aunt because he’s always at the Bugle!” May shouts into Jonah’s bristled mustache. “What?!?” the persnickety editor replies between puffs of his cigar. “He’s never at the Bugle ‘cause he always has to take care of you!” Like a lightbulb going off, the two are struck with the inconsistencies between their stories. Turning on the young man, Dream Jonah and Dream May accuse Peter with a grim “Where have you been?” 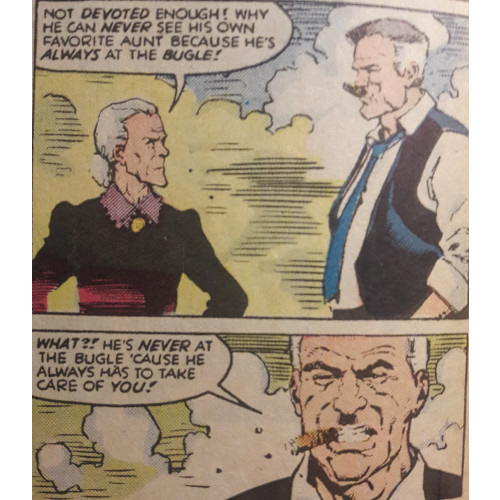 It’s a grand idea Nocenti fails to capitalize on (and, sure, maybe she can’t because of limited page length). What would Peter do if Jonah and May (or any number of people in his life) put their heads together and discussed the inconsistencies in his days, schedules, history? Part of keeping a secret identity means Peter has to lie to friends and family about his whereabouts all the time, and until reading this issue, I’d never given much thought to the idea that his dual life as Spidey and Peter hinges, in part, on his loved ones remaining ignorant by not colluding. Again, the idea is a fascinating one, making me wish Nocenti had honed in on it more. What transpires is different: Peter wakes up, the dream fading as he continues bobbling secrets and lies in real life. A rather disappointing ending given how nicely Nocenti teetered on the edge of poignancy. Considering the story’s title is “You’re Lying, Peter Parker!” I guess I would have expected something a bit more direct.

For a single issue, Web of Spider-Man Annual #2 packs in a lot of material, much of which is surprisingly decent. Nocenti manages to craft a yarn with more depth than I expected going in, comprised of various pieces that somehow work well in tandem. She struggles to bring the same relevance to the backup story, which I’d like to blame on its limited length, though perhaps a tighter focus may have been nice. I guess I just would have appreciated if the story had honed in on Peter’s (potentially misguided) attempts at juggling the various components of his life instead of the jumbled casserole of elements Nocenti delivers.