A new villain and kooky plot make for an entertaining annual, boosted by some nice references to recent continuity

After such a dark trek through “The Death of Jean DeWolff” last time around, I hope something titled “Fun’n’Games” would present something lighter, a more “spring-in-your-step” kinda tale. But I’ll be honest right away: I understand the “Games” part of the title, but it’s the “Fun” aspect that alludes me. As we'll soon see, there's not much of that going around for our cast of characters.

This issue continues our adventure through various Spidey annuals that were published across his three main titles--Amazing, Spectacular, and Web of Spider-Man--and as I mentioned in my first annual post, I was hoping that connections popped up between the annuals and other stories. In the case of Amazing Spider-Man Annual #19, we do find a connection, albeit a somewhat surprising one.

Just when you thought you’d seen the last of the “Aunt May’s Hat Saga,” it comes back like a returned Christmas gift that your relatives didn’t really want. 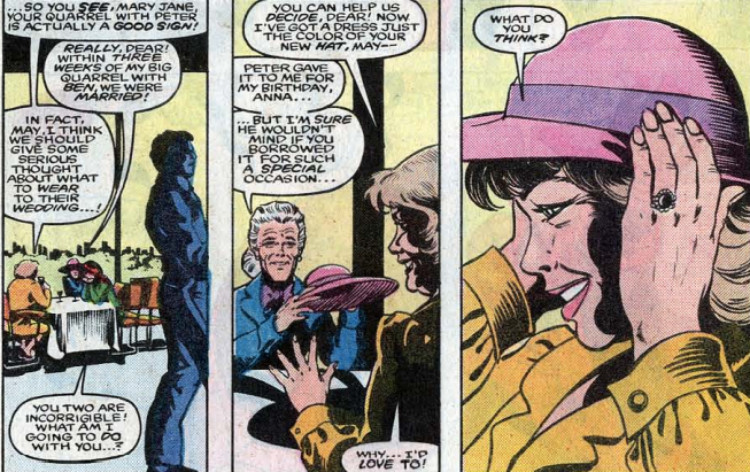 Rounding out our annuals for 1985, “Fun’n’Games” features a plotline I really never imagined anyone ever touching on again: the ongoing adventures of Aunt May’s dang hat. Back in Marvel Team-Up #149 (also by Louise Simonson), Spidey fought an electric monster alongside New Mutant Cannonball, who spent a good chunk of the issue safeguarding a hat he purchased for his mom. In MTU #150 (ALSO by Simonson), Peter sees an ad for a hat sale at the same store and decides he’ll buy May one as a way to bridge the rift he caused by quitting graduate school--figures it’d make a nice birthday gift. In Web of Spider-Man #1 (by--guess who?), May tries on a hat and almost buys one. In Web of Spider-Man #3 (yep, you know the drill), Peter finally gifts May with this elusive piece of headwear. Finally.

And Simonson brings it back. 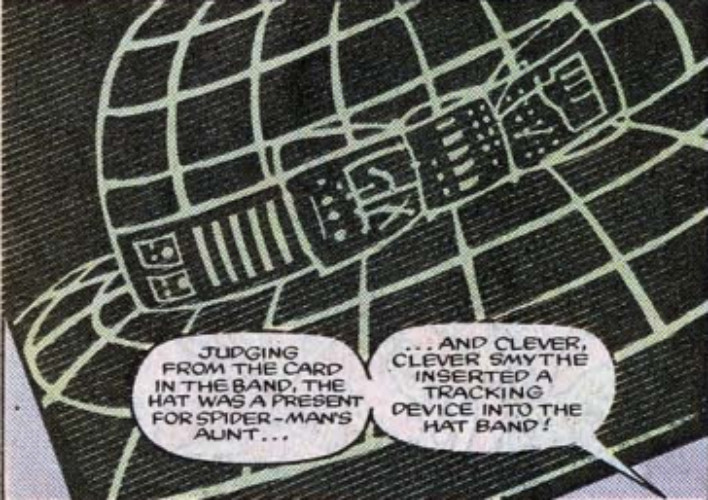 Y’see, in WSM #3, Spidey lost the hat for a hot second (as is typical) only to receive it back from the Kingpin. But as Simonson reveals in this issue, Kingpin had a man plant a bug (haw, haw) in the hat’s brim, thinking it’d track him to Spidey or Spidey’s family. The technically savvy employee? One Alistair Smythe, who fans may recognize as either the son of Spencer Smythe, the original Spider Slayer inventor, the guy with the funky shoulder cannons from Spider-Man: The Animated Series, or the OsCorp flunky played by that guy from The Office in Amazing Spider-Man 2. What fans may not recognize is Smythe himself. Balding and overweight, the man is a far cry from his more vicious self later writers will depict him as; this Smythe is a little simp who waddles around, muttering in third-person.

Simonson depicts him as a unique character, but seems to sequester him to “one-off villain status.” What surprised me about the character is how different he is compared to later versions. Dan Slott, during his run on Amazing and Superior Spider-Man, used Smythe in a particularly engaging way, transforming the character into a violent baddie responsible for the death of a supporting character. Smythe has never been A-List material, but he’s not obscure enough to warrant a complete sidelining. I assume the animated show kept him relevant longer than he had any right to remain, so kudos to Simonson for inventing a geeky little dork with surprising staying power. 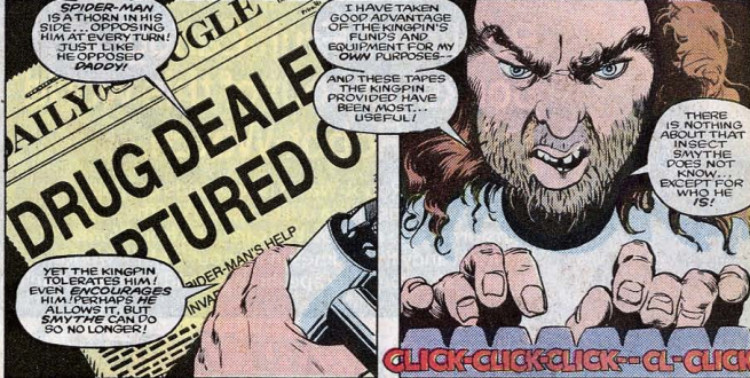 “Goofy” villains, especially those without powers, are hard to create. Look at Web of Spider-Man Annual #1--Ann Nocenti created Alexis Sharpe, a washed-up con artist who talked like movie characters. Momentarily memorable and a little off his rocker, Sharpe was by no means a strong contended for “Villain of the Year” and has faded into obscurity. Smythe, however, possesses similar characteristics but has remained in a very tiny spotlight. Perhaps his parentage has kept him relevant as well, since he’s the son of the original Spider Slayer creator?

Whatever the case, Smythe’s ludicrous personality maintains the issue’s pace, as much of it centers on him. Simonson makes him a surprisingly viable threat, particularly when he kidnaps Mary Jane and, for some reason, is convinced that she’s Spider-Man. He’s got explanations for everything--where her strength is from, how she can be Spider-Man even though she’s a woman--and Simonson plays up his insanity as much as she can. Is it coincidental that Smythe so adamantly believes in MJ’s spidery persona in order to move the story along? Heck, yeah, but it’s done entertainingly. 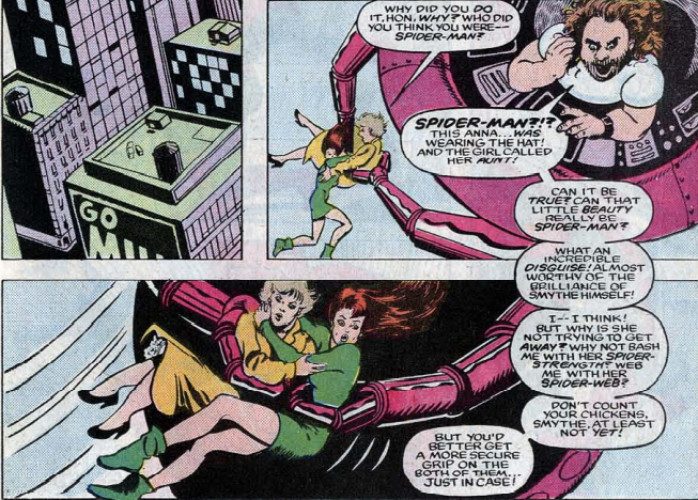 Also well-done are Simonson’s references to continuity. We’ve already seen her make similar references in MTU #150, a story indebted to an earlier Roger Stern piece, and she carries that theme here. Much of her story hinges on the new status quo between MJ and Peter. As the “Alien Saga Costume” ramped up, MJ revealed she knew Peter’s dual identity in ASM #257; in a later issue, she aired out her feelings, saying she struggled with balancing her love for Peter (as a friend, mind) with her worry about his superheroes. Simonson nicely brings that clash to the fore in this issue, centering MJ’s arc on this notion of fear vs. faith.

You can tell that Simonson is trying hard to give MJ a role in this annual and, in concept, she succeeds. When she’s captured by Smythe, MJ outwits him at every turn, using her wits to distract the addled genius long enough to bring about his downfall. Peter plays a role, but MJ’s the real star of the issue. Her internal struggle, along with her external difficulties, do a lot for her character.

Originally, I found what I thought was a giant plot hole in the story: to tee up the kidnapping, Smythe follows the hat’s signal and intrudes upon a brunch between Aunt May, MJ, and MJ’s aunt Anna Watson; since Anna is trying on the hat at the time, Smythe mistakenly believes she is the gift’s recipient and carries her off instead of May, also capturing MJ in the process. As I read, I had a very difficult time believing certain characters couldn’t put two-and-two together: if Smythe followed May’s hat, and if Spidey had previously possessed said hat, wouldn’t it be obvious to everyone that whoever owned the hat must have received it from Spidey? Aka, May and not Anna?

But glancing a second time, I saw that Smythe never references the hat to anyone. It seems to everyone gathered, he simply kidnaps a woman he mistakenly believes is Spidey’s aunt. Once Spidey finds the hat, he automatically connects the dots, but that’s only because it’s obvious to him. Since Smythe was mum about the hat, I actually don’t think May or Anna had much reason to think that Anna was kidnapped because of the gift. And Smythe? Well, he’s kookier than Cocoa Puffs. I doubt he’d be able to work it out. 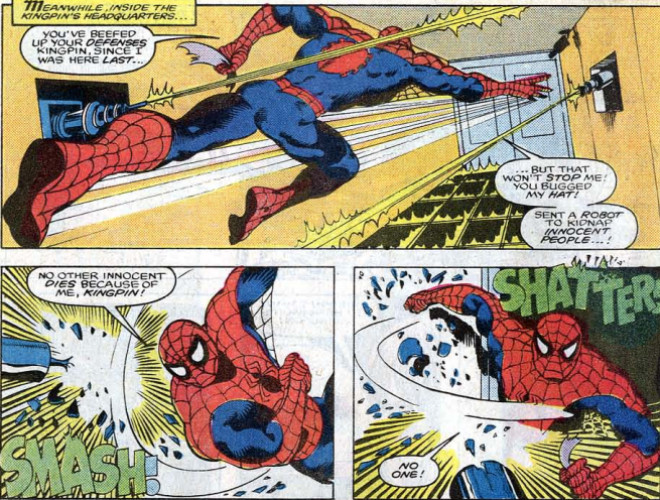 And what of Spidey himself? His role is, largely, kept to a minimum in favor of focusing on MJ and Smythe. I didn’t really mind the Web-Head getting placed on the back burner momentarily; it’s nice having stories where he isn’t always the central protagonist. To her credit, Simonson delivers a heckuva sequence where Spidey breaks into the Kingpin’s compound after learning about MJ and Anna Watson’s kidnapping. He’s hopping mad, tearing through traps and guards with a ferocity akin to his anger during Stan Lee and Steve Ditko’s “Master Planner Saga.” Along the way, Simonson injects a reference or two about the last time Spidey confronted the Kingpin, in Spectacular Spider-Man #100. Again, it’s a nice showcase of Simonson’s ability to respect the stories which came before.

I had no preconceived notions heading into this annual, and I walked away more pleasantly surprised that I figured I would be. I had no idea Simonson would bring back this dang hat for a final hurrah. Amusing as the gimmick has been, I hope this is the last we see of May Parker’s meddlesome present. It’s caused Spidey too many headaches at this point, and if Simonson is going to reference the recent past, I’d prefer she latch onto stronger material. Admittedly, she does--Spidey mentioning his recent tussle with the Kingpin is a nice touch--but this is the fourth story and third series we’ve seen that little scrap of fabric pop up in. It’s time to lay the past to rest and see how the future moves forward.