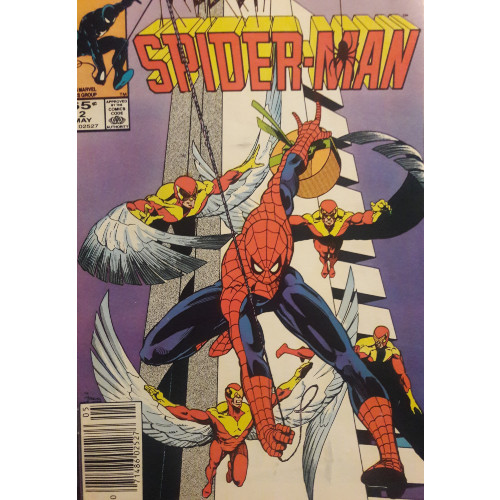 I’ll admit it. I bought this story because of the cover.

From time to time, I’ve read personal narratives by comic book readers where they remember encountering a particular issue or series of issues. Maybe it was the first issue they ever bought, or maybe they finally finished that story arc they’d been looking to complete for months or years. Or maybe a flashy cover caught their eye, silently begging them to buy the issue and read the story within.

Over the last 32 blogs, we’ve dissected the era known by fans as “The Alien Costume Saga,” and it’s a period of Spidey history that tread all over the illustrious Web-Swinger. Having come to the end of that saga, I was fully content to move on, bid “Sayonara” to Black Cats, disgruntled aunts, and alien parasites for the time being.

And then the cover of Web of Spider-Man #2 caught my eye.

The cover itself isn’t wholly remarkable--considering that veteran artist and painter Charles Vess constructed the cover to WSM #1, this pales in comparison--but the image made me pause. Spidey battling the fiendish Vulturions, new foes from WSM #1.

Ah! A sequel! my brain cried in glee, and the segment of my mind which loves nothing more than seeing creators reuse previous material or continue stories you thought they’d never touch again began to itch. I bought the issue, as well as WSM #3, which serves as the second chapter of our two-part tale.

I was hesitant to approach the issues, admittedly. I thoroughly enjoyed Web of Spider-Man #1, highly appreciating Louise Simonson and Greg LaRoque’s ability to end the “Alien Costume Saga” on a dramatic high note. One, final struggle for dominance between Spidey and his parasitic outfit, a standalone narrative that not only concluded a long-running story arc but sewed the seeds for a very significant villain and decades of stories in the future. Not that issues #2-3 needed to be as culturally significant, but I wondered if Simonson and LaRoque could carry their momentum going forward.

Turns out, they can. 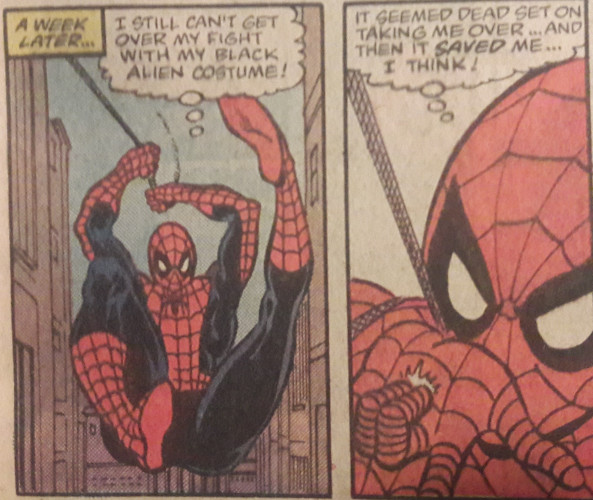 The beauty of this two-part tale comes from how naturally Simonson weaves in a massive amount of material. It’s like she took the entire scope of the “Alien Costume Saga” and slid it artfully into these two issues, capping off a year-long story arc with a “P.S.” of sorts. While WSM #1 did a perfectly entertaining job at (temporarily) ending the struggle between Spidey and the alien symbiote, several questions still remained as the “Saga” drew to a close: how would Spidey handle his recent break-up with the Black Cat? Was he ever going to patch up his crumbling relationship with Aunt May? And, perhaps most importantly, were Adrian Toomes knock-offs, the Vulturions, ever going to see the light of another comic book panel ever again???

Simonson provides a resounding chorus of emphatic “Yes”s for two of those questions. Peter’s falling out with Felicia isn’t really addressed in these issues--the 101st issue of Peter Parker, the Spectacular Spider-Man seems to have dealt with that, if my research skills aren’t failing me--but the other topics are wholly addressed. In other previous stories, specifically Marvel Team-Up #149 and #150, Simonson had Peter reflect on consolation with May, of finally making amends for his foolish decision (dropping out of graduate school) and for telling her of that choice rather brusquely. Woven throughout those two issues are references to department store hats, of all things, but they become important to Peter: you see, May’s birthday is fast approaching, and Peter feels that a proper gift from him will help smooth out these rough relational seas they’ve been riding. Naturally, without the other two issues, you wouldn’t be aware of the hat or its symbolism, which I could argue takes the wind from the sails of its use here. But I’d argue that, as a proper “epilogue” to the “Alien Costume Saga,” I’m fine with Simonson bringing concepts from other stories and fleshing them out 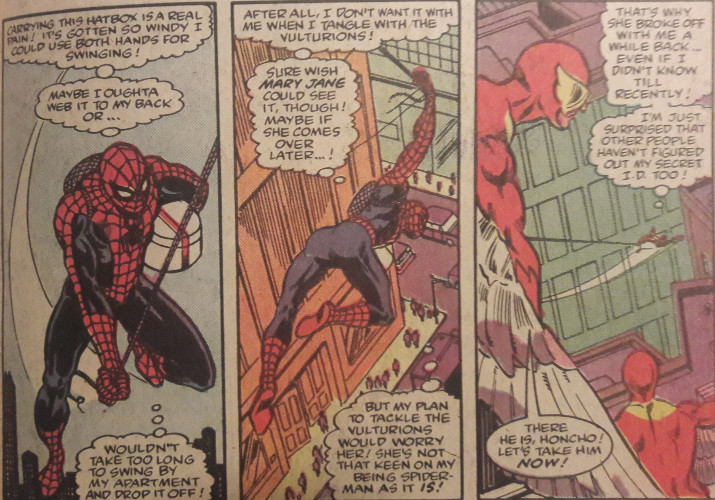 There’s certainly something to be said about standalone stories versus larger arcs, especially long-running stories which take place across multiple titles (like how the “Saga” was strung across Amazing Spider-Man, Spectacular Spider-Man, Marvel Team-Up, and now Web of Spider-Man). I can only imagine how confounding it might have been back in the day to track down all the pieces for an entire story arc, and even if some chapters were less significant than others, any completionist would have to spend a decent chunk of time, effort, and cash to procure all the bits and bobs. Yet, I find Simonson's ability to bring closure to the Peter/May conflict rewarding, especially as I had been invested in the preceding chapters. WSM didn’t make itself an easy title to jump onto without any prior knowledge of Spidey or his recent history, but for diehard fans interested in prior chapters, these issues are fulfilling.

Simonson’s handling of the Vulturion characters deserves an examination as well. Sore from their previous encounter with Spider-Man, the winged thieves are determined to take another crack at him, and this time, they want an audience. Hoping their assault against the Wall-Crawler will put them in the good graces of the Kingpin, the Vulturions plan on defeating the Web-Head outside the Kingpin’s headquarters. This is yet another story point Simonson is borrowing from previous writers; Bill Mantlo, in PPSSM, had recently killed off (well, “killed off,” since he’d inevitably come back several years later) a villain known as the Answer, whom Wilson Fisk had hired on as a masked assassin. Latching onto the Answer’s demise, Simonson provides her one-time criminal “masterminds” a narrative reason to exist outside the brief conflict they created for Spidey in WSM #1. 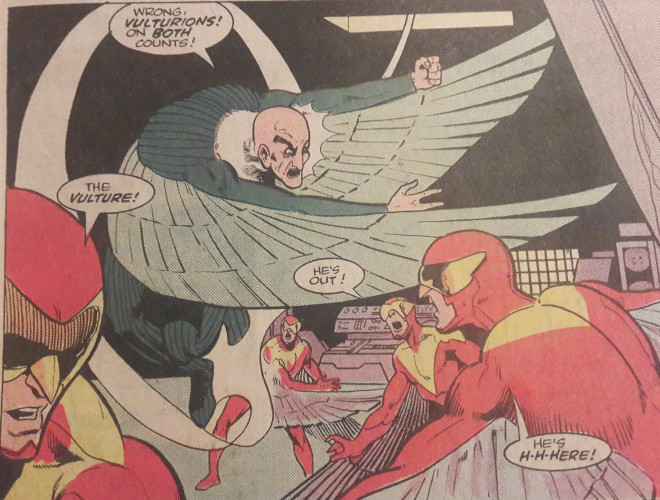 Additionally, Simonson wisely brings Adrian Toomes, the original Vulture, for a high-flying fracas in the third issue, a clever use of the character as he defends his legacy against the Vulturions. The tried-and-true battle of “old vs. young” also becomes a war between the experienced and the inexperienced; for any fans such as myself who have grown fond of the old coot, cheering on Adrian as he outwits and out-flys the newbies makes for even more entertaining combat than the Vulturions’ tussle with Spidey.

This isn’t to say the Vulturions’ first time tackling the Web-Head is a snooze fest. The villains do utilize some pretty lame weaponry (blow dart guns), their ridiculousness compounded when you realize how long Toomes has been menacing Spidey without the aid of any tools aside from his wings, which augment his strength and mobility. Even with the silly guns, the Vulturions perform well for a couple of second-string rip-offs, though their plot to impress the Kingpin is sullied by some clever writing on Simonson’s part. Simonson finds an organic reason for the Vulturions to blow their chances with the crime lord, even if they end up trashing (and I’ll just say that’s somewhat of a pun) Spidey like they planned. Simonson’s reasoning is indebted to plots established by previous writers, pulling out those elements to properly garnish her own story. Thus, the tale becomes more layered than expected, with details finely wrapping up the “Alien Costume Saga” plot. 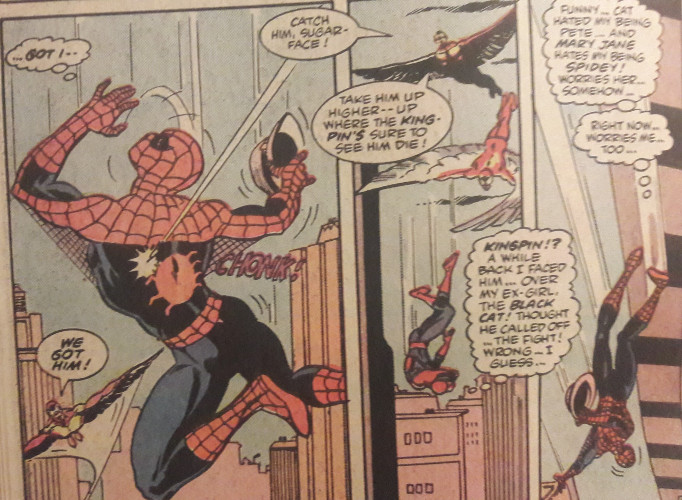 Simonson doesn’t rank up there alongside some of my other favorite Spidey writers--with names such as J.M. DeMatteis, Mark Waid, Peter David, J. Michael Strazynski, Brian Michael Bendis, Mark Millar, and (somewhat begrudgingly) Dan Slott taking those coveted spots--but her past two tales have been genuinely entertaining. She caps the “Alien Costume Saga” well, taking various leftover pieces and forming a tapestry that checks most of the remaining boxes. The “Saga” has been an enthralling story to read through, and while I certainly have stories I enjoy more, I will note that, by and large, this is how you write a long-running story arc. Disjointed elements flare up now and again (mostly thanks to Al Milgrom’s wonky timeline), but the “Alien Costume Saga” is, on the whole, pretty well put together. An overarching theme blending with various subplots and some decent characterization make for an exciting year-long event. And, on top of all that, it doesn’t overstay its welcome. The “Saga” tells the story it wants to and moves on to other things.

Now somebody just tell that to the clones.