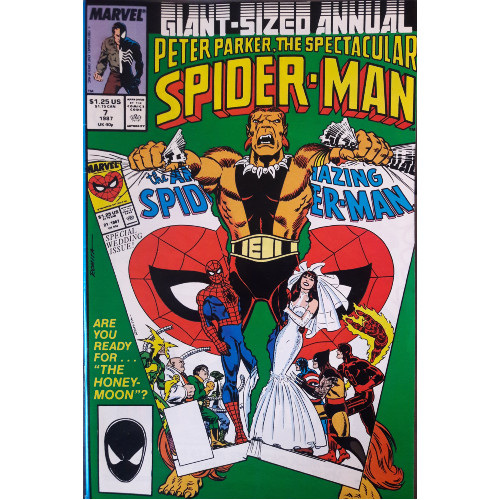 A few Spider-views ago, we celebrated the long-in-coming (and-no-longer-canonical) wedding of Peter Parker and Mary Jane Watson. Doubts were raised, fears quelled, vows exchanged, bells rung...and only a few punches thrown. David Michelinie created a tale that got to the heart of what made a stirring Spider-Man tale, filling Amazing Spider-Man Annual #21 with deep characterization and genuine struggle.

To perhaps the surprise of no one, fans were treated to the couple’s honeymoon in another 1987 annual over in sister title Peter Parker, the Spectacular Spider-Man. Our recently-unioned couple, deep in the throes of marital bliss, find themselves in what should be the happiest time of their lives…

...and yet the specter of Spider-Man ever looms.

The last few PPSSM annuals have been disappointing, to say the least. Master prose practitioner Peter David let me down not once, but twice, as he tried constructing stories around a largely unknown protagonist. After David’s two-year tale, Owsley (who, as I’ve mentioned before, I will be referring to by his current given name) delivers a story that could have been far better than what David delivered previously.

Priest has a pretty easy task here: follow up Michelinie’s ASM annual with an after-the-wedding story. What do Peter and MJ do on their honeymoon? How does this issue exemplify their relationship, especially now that they’re a married couple? Priest definitely adds various details about how the Parkers spend their time--wining and dining, living it up in a gorgeous seaside mansion in France, enjoying the beauty of a nearby beach, watching Peter go gallivanting off as Spider-Man on what should be one of the most important trips of his entire life. Y’know, regular couple stuff like that.

I get what Priest is doing. He’s seeking a balance between the emotional nature of the Peter/MJ relationship while also inserting a dramatic touch of Spidey action so you don’t think you picked up a romance mag by mistake. Unfortunately, he forgets one very key aspect that other writers have remembered so far: Peter’s Spider-Man identity, though absolutely a point of conflict within his marriage, is not intended to be separate from his Peter Parker persona. When MJ married Peter, she knew full well she was marrying Spider-Man as well. The heroic side of Peter, both a help and hindrance to his marriage, is completely enmeshed with everything else in Peter’s life. Priest, instead, seeks to cleave the two. 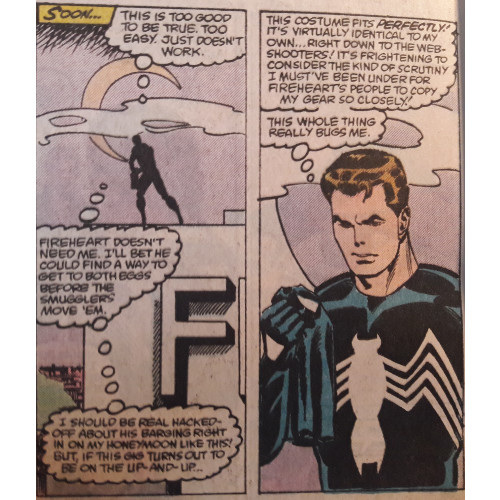 Michelinie, in the aforementioned ASM annual, knew how integral the Spidey/Peter dichotomy was to the wedding proceedings. It’s why Peter struggles with Gwen’s loss while questioning his decision to marry MJ--can he pull her into that lifestyle? It’s why he takes MJ out for a late night swing--as Spidey, he can briefly remove her from the hustle and bustle of wedding planning in his own unique way. Likewise, J.M. DeMatteis’ “Kraven’s Last Hunt” is full of sequences where MJ worries about her missing husband’s whereabouts. The story’s culminating moment sees Peter dig himself out of a grave, driven by his love for his wife. Through such a harrowing ordeal, the two bond and grow out of deep love for one another.

Priest’s story forces Peter and MJ apart as Web-Head takes on a job for old foe the Puma--certainly a nice nod on Priest’s part to the Tom DeFalco-created character. Nowhere during the following ordeals do Peter and MJ lament on the time lost by having Spidey traipse around a little French village in his black bodysuit. Peter makes one brief mention about how he, probably, should be mad at Puma for interrupting his honeymoon (see above panel), but hey, the cat-man’s paying him $80,000 bucks to do a job, so what’s the harm, right? MJ, going clubbing with some friends, defends her husband (who her friends see as somewhat mawkish) against their protestations...but that’s it. She never once thinks how she’d rather be with Peter, never once regrets not spending this time with him on their honeymoon. 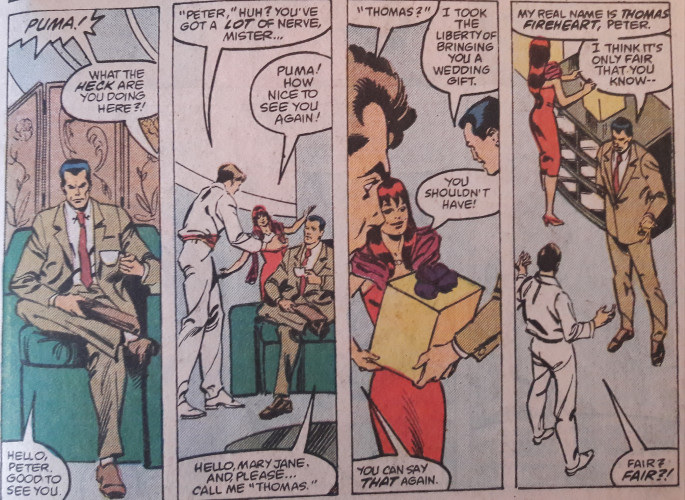 Near the end of the annual, Priest tries sliding in the idea that Peter believes he can provide for his wife on his own, thank you very much, Puma. That idea works somewhat better--Michelinie had alluded to Peter’s financial struggles in the wedding issue, and Priest even has Peter wonder about money a bit in this tale. That idea undoubtedly encourages him to take the Puma’s offer, but part of me believes the concept would have better served a different story. Priest seems to want to shoehorn Spidey into the annual, but this leaves MJ with the unenvied position of “side character” during her own honeymoon. She’s not even given an arc after this point, just a few scenes of her dancing and enjoying a night out with friends. 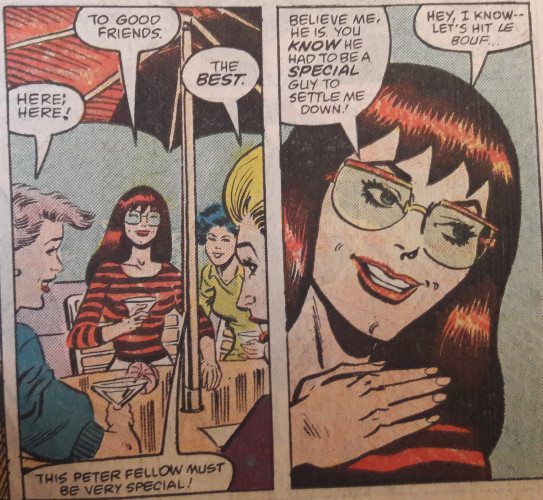 What hurts this second half, additionally, is how well Priest sets up the earlier pages. As I said before, he injects some genuinely interesting details about how Peter and MJ spend their time before Puma barges in. Peter has, for so many years, been fairly lonely when it came to finding someone to love him. We’ve seen, in previous posts, the rollercoaster ride of a relationship he had with Black Cat, and other potential paramores (Liz Allen, Betty Brant, Gwen Stacy) were lost in one way or another. MJ’s the first character who not only wins Peter’s heart and affections but keeps it, despite the entangled web of Spider-Man. This is the woman who valiantly put up with Peter going missing for days, thanks to Kraven. Watching the two of them interact is highly entertaining--from Peter juggling suitcases with his super strength, to MJ recklessly driving and throwing her husband off-guard--and just the idea that Peter doesn’t have to be alone adds a new dimension of tension, conflict, and reward to any issue he and MJ appear in together. This issue’s strengths are wholly reliant on their relationship and the moments Priest hones in on their burgeoning new status quo.

That fact, sadly, cannot wholly overcome that this issue’s second half is largely devoted to standard Spidey material. Puma’s return is a nice touch, especially for a reader such as myself who recently wrapped up “The Alien Costume Saga,” but the rest of the annual feels too commonplace. This should be a celebration of Peter and MJ’s new normal, so having Peter wander off as Spidey while Priest, maybe scratching his head, kinda just plops MJ into the middle of a group of friends feels off. “Are you ready for…‘The Honeymoon’?” the issue’s cover asks readers, almost challenging them to embrace the extraordinary exploits within. Yet, you’re left with something a little more hollow than what the annual promises. Maybe you enter ready, but you leave a little deflated when you realize this annual isn’t the celebration it could have been.