Gerry Conway wrestles with the editorially-mandated "Acts of Vengeance" crossover, valiantly struggling to keep control of his growing narrative 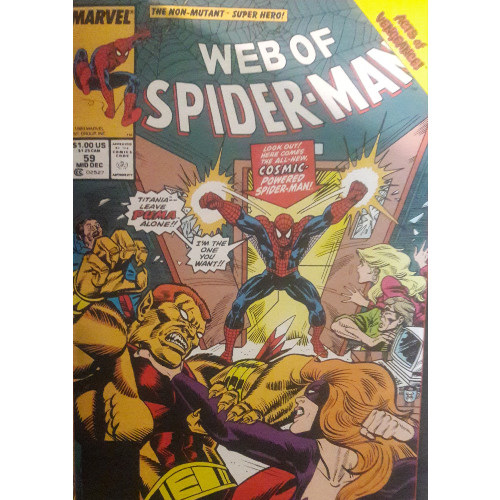 Last fall, I posted a blog which bore basically the same title as this one: “With Great Power.” The only difference, stylistically, was an ellipsis after the words (so really “With Great Power…"), indicating a narrative caveat. Readers were, practically automatically, supposed to finish the sentence with the other half of Spidey’s famous mantra: “...comes great responsibility.” The stylistic change was also indicative of the narrative’s theme, which saw Spidey skip out on a reconciliation meet-up with Aunt May in favor of fending off Jack O’Lantern, an action which left May’s fiancé Nathan Lubensky quite peeved with Peter. The reader was, I believe, supposed to reflect upon the title and symbolically tether Peter’s lack of responsibility to the half-finished proverb.

Or maybe I’m reading too deep?

This title, however, doesn’t leave us dangling. It’s straightforward in its proclamation. “With Great Power.” Because that’s what we’re dealing with. Last post, we saw Spidey’s abilities amped up to 11; with some new powers to boot, he made mincemeat out of the trembling Trapster. With an increase in power, Spidey’s hitting the big leagues in a way he hasn’t ever before.

He’s got the power. What about the responsibility? 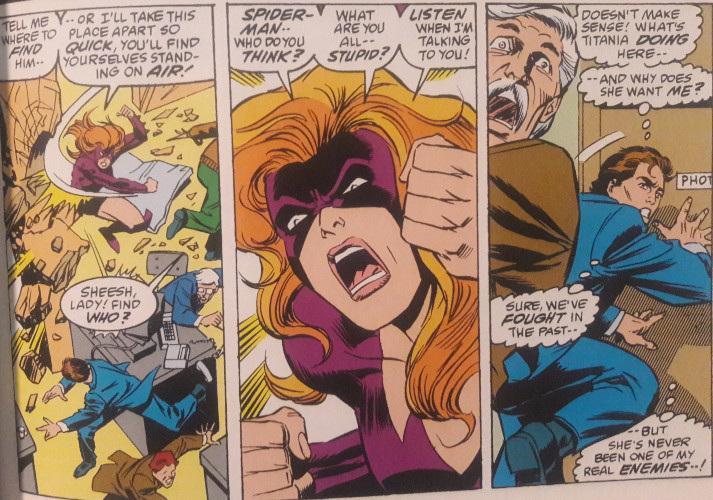 Conway teams with his “Parallel Lives” collaborator Saviuk for this issue, providing a look that appears somewhat similar yet not as distinctive as Conway's SSM teammate Sal Buscema. For the “Parallel Lives” graphic novel, Saviuk did his best John Romita impression, creating a style that mimicked the time period appropriately while remaining true to his own stylistic proficencies. For this issue, gone are the attempts to ape anyone; though Saviuk’s style looks a bit like Buscema’s, he lacks the characteristic head-and-jaw visuals Buscema’s art is recognizable for. Saviuk’s art seems a little simpler and perhaps not as distinctive (it would, in other words, take me a while to place his style without knowing he’d penciled an issue beforehand), but he delivers action as well as anyone. I’d actually compare his style to some of his later 90s counterparts; several panels gave me a “Clone Saga” vibe, particularly in the way Saviuk poses a pensive Peter for the issue’s opening splash panel.

Conway feels like the right choice for scripting this second chapter in the “Cosmic Spider-Man Saga,” particularly as he was the man who introduced us to the newly-empowered Peter Parker in the previous installment. He’s given the opportunity to continue his tale here, though I’d offer a bit of complaint toward his narrative: nothing much happens to further the story in any significant manner. Allow me an explanation. 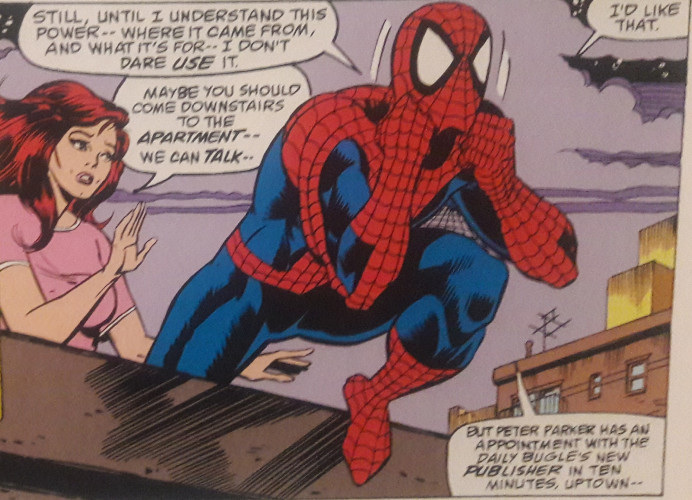 As I mentioned previously, this story takes place during the “Acts of Vengeance” crossover, which saw several villains team up and decide to send enemies after their arch-foes that the heroes had little interaction with. Hence, our last two installments saw Spidey trade blows with Graviton and the Trapster, respectively. I’m not sure how this played off in other series, but in Spidey’s case, the core idea becomes a tad repetitive. There are narrative nuances in each instance Spidey engages a new foe, which I’ll touch on in a bit, but the concept doesn’t deliver much narrative potential at its most basic level. New guy after new guy fights Spidey; new guy after new guy gets clobbered.

In this case, actually, it’s new “gal.” She-Hulk enemy and Absorbing Man paramour Titania comes to town at the behest of Doctor Doom, one of the “Acts of Vengeance” organizers. Cleverly, Conway reminds readers of Titania’s previous attempt at felling Spider-Man, a disastrous endeavor in ASM #283 (which I did not review) that saw both her and her hunk of a hubby almost trounced by Spidey. Even better, Conway doubles down on the vengeance idea by reminiscing about Titania’s first fight against Spidey, a bona fide loss on her part during the original Secret Wars. This definitive loss, plus the more recent failure, have put Titania really on edge, and Conway seems to enjoy messing with her head just as much as he finds satisfaction in having Doctor Doom encourage her rage and wrath towards Spider-Man. Her hate overcomes her fear, goading her to go after the Web-Head. 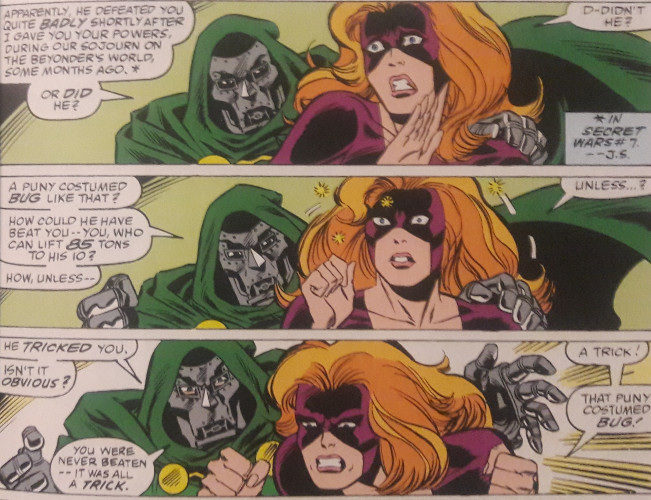 The Secret Wars reference in particular tickled me pink (or, like Titania’s costume, a deep purple?). I had only a faint memory of the Spider-Man/Titania/Absorbing Man fight, but as soon as I saw Doctor Doom standing with the giantess, Secret Wars immediately sprang to mind. Conway’s connection to that story makes perfect sense, given that Doom was responsible for creating Titania, and is a wonderful reference that shows the continued longevity of the series that also birthed the symbiote.

Spidey’s fight with Titania indicates his growing power, leading me to discuss the “nuances” I mentioned a few paragraphs ago. Spidey’s fight against Graviton in ASM #326 perhaps indicated to our hero how in over his head he regularly is when it comes to facing guys who alter gravity or manipulate the elements; he ended the issue feeling a bit disappointed by the loss. It was, maybe, David Michelinie’s subtle way of setting up the “Cosmic” arc. Now that Spidey’s radically empowered, he can go toe-to-toe against some bigger bruisers. Sure, his first opponent was the woefully underpowered and highly underappreciated Paste-Pot-...I mean, Trapster, but Conway simply used the thug as a warm-up. Titania’s appearance shows how Conway is moving our hero up the proverbial supervillain ladder, sending a brawler to attack the Daily Bugle for Spidey to go against head-on. 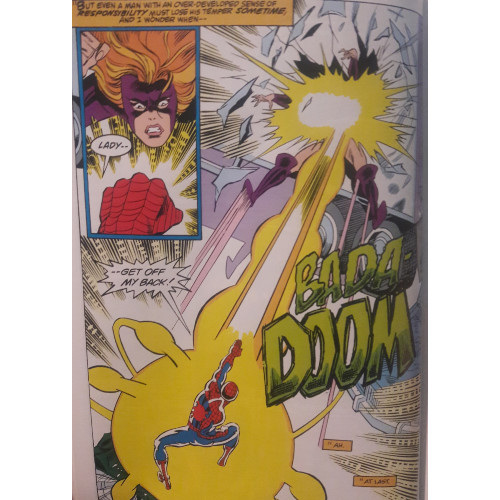 As I remarked in the last post, the appeal is certainly strong. Spidey’s last battle with Titania ended in a stalemate; now, he’s got the power to soundly whup her, sending her smashing through walls, as one glorious splash page by Saviuk displays. Spidey embraces a new level of power and ability and, in doing so, is forced to wrestle with the heightened responsibility that comes with it (not only to others but also to himself, as he works on controlling his newfound powers). This means that the round robin nature of “Acts of Vengeance” is supposed to feel less repetitive. Yes, Spidey faces a variety of supervillains he rarely engages with, but each battle is intended to feel unique or allow Spidey some new inward reflection. His fight with the Trapster left him wondering about his new powers. His battle with Titania leaves him stunned at the full scope of his abilities. He can blast people through walls now. How cool is that?

Yet, for all his storytelling prowess, Conway doesn’t completely sell either the “Cosmic Spider-Man” or “Acts of Vengeance” concept. He tries his hardest, to be sure, and in some cases succeeds. To his credit, I never felt like I needed to branch out and read other “Acts of Vengeance” chapters to understand what was going on, similar to his impressive narrative juggling while writing the SSM “Inferno” tie-in issues. But purely through the nature of the story ideas bandied around--Spidey goes cosmic, faces a horde of foes he generally does not fight--the issue feels a little cyclical. Conway can primp and preen the story all he’d like, and if we were discussing this as simply a standalone affair, I’d have no qualms. As it stands, Conway’s capabilities feel hampered, if not downright confined, by the overarching crossover worming its way through these titles.

Conway tries to inject some ingenuity and variety into the fight--for a brief time, occasional Spidey ally Puma becomes involved in the fisticuffs--but it’s still not enough to make it fully fresh. If anything, Puma’s appearance acts similarly to Titania’s in that he reminded me of prior stories we’ve examined, these ones showcasing Thomas Fireheart’s furry alter ego. Fireheart, who was created by Tom DeFalco during the “Alien Costume Saga,” recently purchased the Daily Bugle; similar to how I commented that David Michelinie injected a nice sense of “reality” and change into ASM #326 by giving Peter and MJ a homecoming party, so too does Fireheart’s involvement in the Daily Bugle’s affairs add a dose of real life to the issue. Behind all the masks, costumes, and powers lies somewhat entertaining corporate shenanigans--Fireheart purchased the Bugle, you see, so he could remove its vehement, JJJ-driven, anti-Spidey rhetoric (the fact Puma also knows Peter’s alter ego is a benefit as well). Thus, Conway at least adds another chapter to that particular ongoing subplot.

When he’s indebted to the ongoing arcs around him, Conway certainly feels pressured to play ball. He weaves in what he can while working to maintain some control over the narrative. Largely, he’s able to stick by his guns and works to bring something fresh to the page--his reliance on past Spidey-centric stories (particularly in how he references Secret Wars and the Puma’s recent history) is stronger than his attempts at working in the “Acts of Vengeance” crossover, no matter how unique he tries at being. “Cosmic Spider-Man” is a weird animal that neither Conway or Michelinie seem quite able to tame; we’ll explore their further endeavors as the plot continues developing over the next several posts.