This graphic novel by Gerry Conway carefully intertwines Peter and MJ's history, despite some rocky attempts at injecting original material 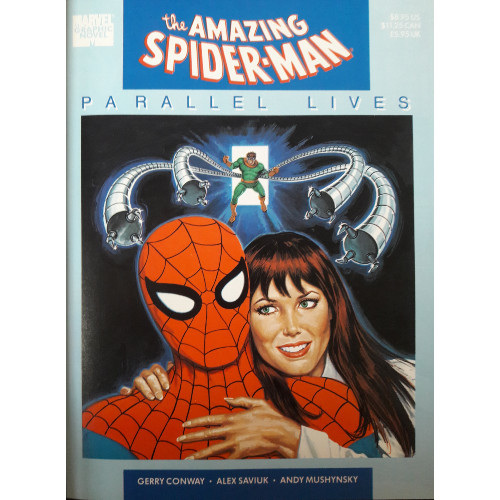 In a prior post, we highlighted the Tom DeFalco-penned issue, “All My Pasts Remembered.” Taking place in Amazing Spider-Man #259, the issue delved deep into the formerly unknown past history of Mary Jane Watson, taking a character who had previously been used as a rather flighty party girl and transforming her into a strong member of Spidey’s supporting cast who would shape Peter’s life for years to come, inane devil-spawned retcons aside.

“Parallel Lives,” initially produced as part of Marvel’s line of oversized graphic novels, is indebted not only to that issue but other Spidey stories as well as it takes a look at the histories of Peter and MJ in tandem. While “All My Pasts Remembered” focuses heavily on MJ’s story, with brief references to Peter, this graphic novel fashions an interwoven story from the pasts of both characters. Our Spectacular friend Gerry Conway takes the reins of this graphic novel to present a tale of two people whose unique lives end up being remarkably similar. 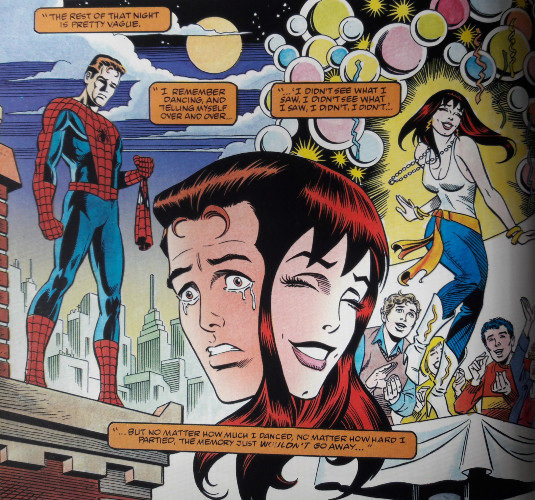 As charming as Tom DeFalco’s “All My Pasts Remembered” is, the story fails to offer context to events as they occur. We know MJ learned Peter was Spider-Man several years before informing him, but when did that happen? Conway’s story gives us those time periods, setting up events in MJ’s life around the same time certain moments in Peter’s early adventures happen. We learn MJ had developed her partying, carefree attitude by time Peter was bitten by the radioactive spider that granted him his powers. And Conway reveals that MJ’s sister Gayle announced her first pregnancy around the same time that Peter was cashing in his Spidey identity as a TV star. Prior to meeting Peter, MJ spends time between her home in Pittsburgh and her Aunt Anna’s home in the Forest Hills neighborhood of Queens, next door to May Parker and Peter. It’s here she makes her fantastic discovery, watching Spider-Man crawl out of Peter Parker’s bedroom window the night his Uncle Ben is killed. This revelation terrifies her, seeing how the nice, shy boy keeps such a deep secret.

Conway balances MJ’s movements between locations with various events in Peter’s life--battles with Kraven, the Molten Man, Mendel Stromm, and others--to give an indication of the time passing. In one very nice bit of retconning, Conway takes a scene from ASM #15 (Spidey’s first fight against Kraven) where Aunt May tells Peter he won’t be meeting MJ that evening because she has a headache; the scene plays out exactly as it does in the original issue, but Conway adds details from MJ's perspective that show she isn’t really sick--she’s scared of dating someone she doesn’t know who is also keeping a pretty big secret (which she does know). By offering context and by fleshing out what MJ’s character would have been in earlier issues had she appeared, Conway really establishes the “parallels” that the story’s title is indicating--we’re not just following two disconnected storylines, but two tales that (sometimes unknowingly) seep into each other and have unexpected ramifications. 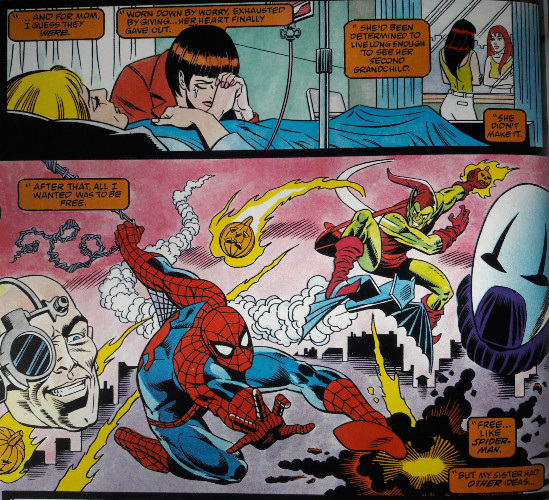 I was honestly imagining I would be bored with this story once I realized it pulled in so much material from “All My Pasts Remembered” as well as several other Spidey issues largely from the Stan Lee/Steve Ditko/John Romita days. But by comparing and contrasting MJ’s story with Peter’s, Conway makes something fresh and entertaining. He isn’t just telling what happened to both these people during this integral time in their lives; he’s examining the dualities and similarities of their experiences and showing just how much Peter and MJ are alike. For years, characters have commented on how strange it is a nerd like Peter ever ended up marrying a supermodel like MJ. Conway makes me realize, perhaps more than other writer, that their relationship owes much to the commonalities between them. Peter and MJ’s relationship and marriage isn’t just a “nerd ends up with the popular girl” type of story; it’s a tale built upon years of interaction, trial, and friendship which blossomed over time into a strong love for one another. I’m not huge into romance stories, but I do understand the importance of bonding with people. Conway displays for us the depth of their relationship and the strong roots which held their marriage in place.

Oddly enough, despite spending so much time diving into the histories of both characters and displaying the similarities between Peter and MJ, Conway skips over their actual friendship and dating, jumping from the period where they originally met (“Face it, Tiger...you just hit the jackpot!”) to their wedding. Part of me is perplexed by this, especially considering that Conway was the writer of ASM for some of this period and was responsible for killing Gwen Stacy, which is one of the primary events behind Peter and MJ becoming a couple. I’d like to say it’s because Conway is so familiar with the stories that he decided to write on material he hadn’t touched on before, but that’s only a hypothesis on my part. What seems more likely is that, since this has so far been a story about MJ and Peter’s lives separately, having such a large section of their lives intertwined included in the middle of the tale might be confusing. 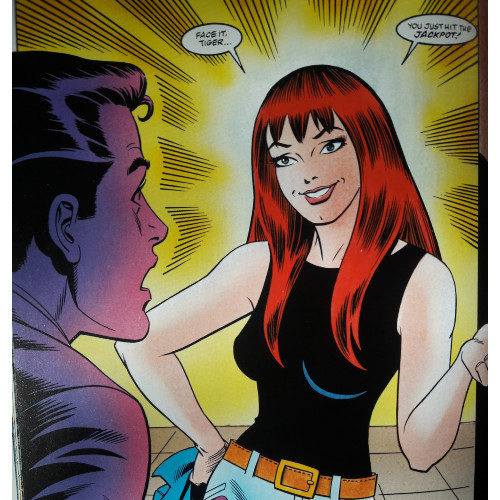 The last third of this graphic novel, sadly, veers slightly away from the format preceding it. Throughout the previous sections of the story, Conway has woven in appearances from Doctor Octopus, highlighting his origin, his battle with Spidey in his underwater base during his time as the Master Planner, and a few scenes from when Otto was a boarder at Aunt May’s house (don’t ask, it was a whole thing). When juxtaposed against Peter and MJ’s story, these moments with Doc Ock don’t seem to make much sense; the only part they seem to play in the bigger storyline is when Peter interrupts tea time between Aunt May and Octavius, remarking aloud his astonishment at seeing one of his worst enemies at the same table as his beloved, doting older relation. Peter’s exclamation of the villain’s deplorable, infamous nickname causes Otto to seethe and grow in hatred for Peter.

This scene plants the seeds for an original arc by Conway, one where Otto sends a drone to attack the Parker household shortly after Peter and MJ’s wedding. Peter stops the drone but finds an invitation by Otto for Spider-Man. Spidey follows it to Otto’s old Master Planner hideout, and the two engage in your usual fisticuffs. The story teeters when Otto begins ranting how Spidey and Peter worked together to deny him a chance at normalcy, with Spidey foiling his criminal endeavors time and again, and Peter making him realize he will never be able to purge himself of the Doctor Octopus legacy. 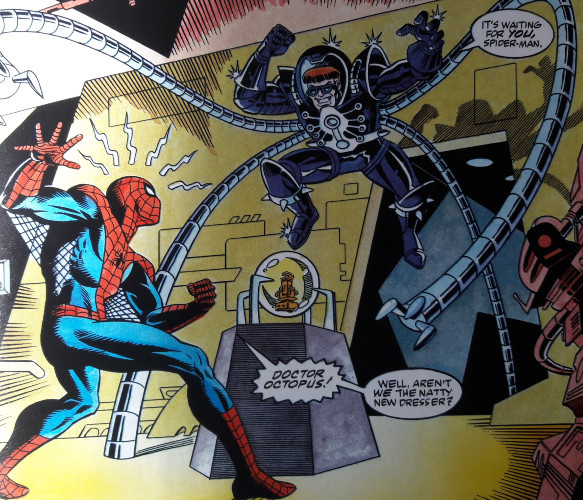 Though Otto’s rage against Spidey is understandable--Doc Ock is, after all, one of many supervillains who believe themselves pilloried and persecuted unfairly by their costumed adversaries--I don’t find his anger towards Peter all that understandable. Even before Peter utters his moniker aloud, Otto thinks that May’s house is the perfect place to hunker down and hide from the police. If he believes himself a fugitive from the law, he’s already beyond the normal life experienced by your average, law-abiding citizen. Perhaps he’s trying to put aside the Doc Ock identity until the heat is off him, but Peter’s comment hardly seems like the impetus for Otto to loathe him almost as much as Spidey. I’d argue this is just Conway’s way for Otto to target Peter, but it feels a weak argument for Otto to make. But this is, of course, a man who will later don a snazzy suit of armor and go toe-to-toe with Spidey in his former base (a wonderful nod to the original “If This Be My Destiny…” saga) while threatening to level Manhattan with the equivalent of a nuke. I think he’s a few arms short of an entire octopus.

One other minor complaint I will mention are the few continuity errors Conway makes in this story. According to DeFalco’s “All My Pasts Remembered,” MJ’s first impression of Peter when she sees him is that he’s “so serious! A real bookworm!” It’s presented in almost a negative light, similar to how characters such as Gwen Stacy and Harry Osborn perceived Peter when he met them in college--Peter’s smarts, combined with his insecurities and internal worries, made him come across as swell-headed, impersonal, closed-off, and arrogant. In “Parallel Lives,” however, Conway has MJ call Peter “cute...in a nerdy sort of way.” While she remarks Peter isn't her type, MJ still finds something about him even slightly attractive, which is more a compliment than what she gives him in ASM #259. The other small error comes when Peter graduates high school, Conway having the boy comment about how Liz Allan broke up with him. As far as I know, while Liz was interested in Peter in high school, Peter never reciprocated those affections whatsoever. At the time, he was pursuing Betty Brant. Again, it’s only a small goof-up, but it’s one that took me out of the story momentarily. 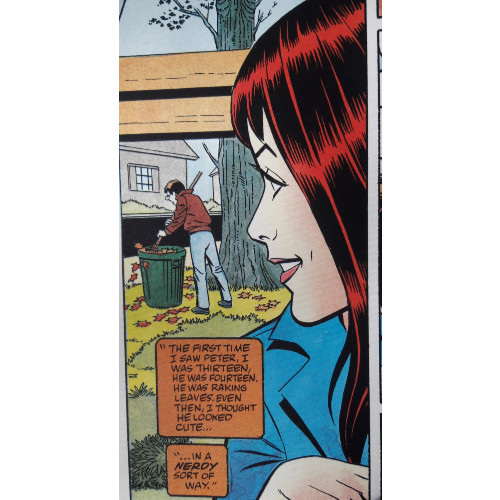 Despite some small inconsistencies, “Parallel Lives” does a remarkable job at pulling together Peter and MJ’s disparate histories and aligning them with one another. You really feel the similarities between the two characters and the struggles they endured early on in getting together. Conway’s greatest strength with this story is how he works MJ’s past into Peter’s history, setting the stage for a stronger relationship between the two. Discovering how connected MJ has been to Peter prior to their first physical meeting enhances their relationship and makes sense of why, narratively, it took so long for the two characters to meet. Though Conway’s original subplot with Doc Ock fails to be as entertaining as Peter and MJ’s story, you can be sure that when the focus on the narrative is on our loveable nerd hero and his redheaded bride, Conway’s writing comes out strong. With art from Alex Saviuk that makes you feel like you’re reading a John Romita issue (not a bad thing, certainly), “Parallel Lives” transports you back to one of the most important eras in Spider-Man history and, amazingly, adds content that shapes the older tales positively. No dumb retcons here; only character-rich additions which reinforce how strong MJ’s character is and how much stronger Peter and MJ are when they’re together.