Though an improvement over Marvel's 1988 crossover, this event arc still struggles to find solid footing as it bobbles some important plot points 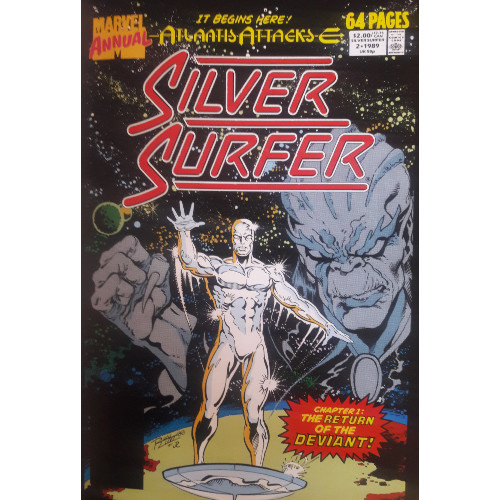 The “Marvel event of 1988” approached the crossover concept with a unique idea: why not tell the story, “The Evolutionary War,” over that year’s annuals? Why not have twelve individual installments focused on different titles and different characters that are all tethered to the same overarching plot? Sounds great, no?

Problematically, “Evolutionary War” suffered instead of benefitted from this type of structure. As I noted in my review, each individual annual more or less stood on its own. Some were more interesting than others--though I didn’t care one iota about what happened to the Punisher, seeing Chris Claremont write an X-Men adventure that took place in the Savage Land (with Art Adams illustrations to boot!) was fun. But the key phrase lies at the end of a previous sentence: “on its own.” Entertaining as some issues were, they failed to congeal into the overarching story the event promised. With each writer and artist devoted to their particular annual, the “Evolutionary War” elements were relegated to the background, waiting in the wings, grasping at a handful of panels our various creators believed would, somehow, contribute to their larger story.

The result was a jumbled mess of story bits that kinda, almost went together. You ended up having to do a lot of mental cobbling and filling in gaps that should have been clear. Despite its title, this war did not evolve...it sorta just drifted from issue to issue.

Does 1989’s crossover suffer the same fate? Or does “Atlantis Attacks” find its sea legs soon enough to swim under its own power? 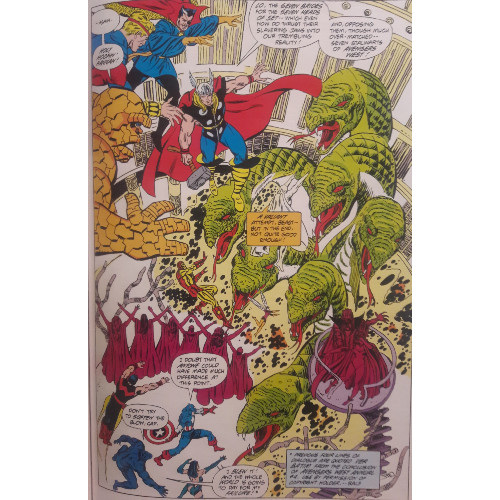 One look at the list of issues contained in this epic may confuse you: clearly, I’ve noted issues that aren’t annuals. Why is that? Primarily, the omnibus which collects the “Atlantis Attacks” crossover included these seemingly random issues--the New Mutants issue, the Marvel Comics Presents issue, etc.--to give a complete scope of the event. Oddly, little of what happens in these other issues is not hugely integral to the event, mostly used as jokes or anecdotes to give a wider view of all that’s going on. I didn’t necessarily need to know what the Hulk was doing during this event, as he takes no part in the main action, nor was I concerned with Firebird’s whereabouts and activities during the same time. These inclusions aren’t integral, but relatively harmless.

The assembled writers and artists (do yourself a favor by pausing a moment and taking a look at the talent associated with this story) on this crossover seem to have realized the company’s error on “Evolutionary War.” 1988’s event was marked by a distinct lack of overarching story, or at least a very weak narrative, as I noted above. “Atlantis Attacks” wonderfully switches gears and, from the start, begins detailing a more cohesive plot. Deviant priestlord Ghaur (who first appeared in a Peter B. Gillis Eternals miniseries I hope to review soon) assembles a mighty force to bring the snake deity Set to Earth, plotting and conniving with others as he does. This arc maintains its course throughout each annual, and though some chapters work it in stronger than others, you’re given the chance to actually follow along as the plot develops. Ghaur’s plan involves an Atlantean war with the surface world and the kidnapping of several female superheroes as “brides” for Set. The dramatic tension between Earth and Atlantis mounts; female heroes are suddenly kidnapped at different intervals; villains Viper and Tyrannus move from issue to issue, weaving their plans as Ghaur’s pawns. Unlike “Evolutionary War,” “Atlantis Attacks” has a discernible plot. 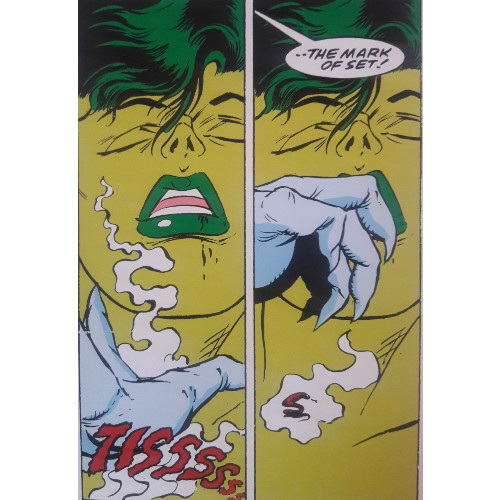 Also unlike “War,” “Attacks” actually uses its principle characters to a greater extent...largely. Yes, some issues are definitely meant to be standalone. A Punisher/Moon Knight scuffle has little to do with the larger plot, as neither character appears again during the rest of the story. But at least twice, the Fantastic Four team with the Avengers to halt some of Ghaur’s plots, and Spidey shows up for three different issues where he does battle with his own super-friends. “War” felt like a crossover in description only, as the event did cross over through a variety of annuals but offered little cohesion. “Attacks” certainly doesn’t perfect the crossover formula, but our characters do interact more frequently. Sequences where multiple characters get together to do some fun villain-stomping didn’t make me stand up and cheer, unlike the dramatic final battle in Avengers: Endgame, but this is at least a crossover which somewhat promises to fill in that definition. 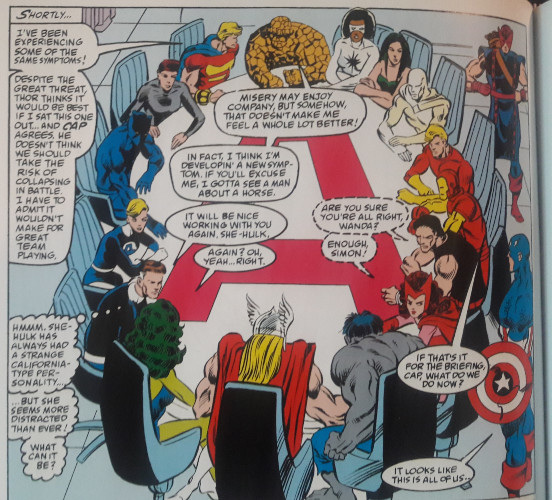 Genuinely surprising moments help the plot as well. Early on, Namor the Sub-Mariner is seemingly killed in an explosion, a dramatic turn which has a ripple effect (pun intended) across several of the chapters. Later, Atlantis itself is bombarded and decimated by her foes, a shocking bit of action which, hopefully, had dramatic effects on stories thereafter. The Atlantis bit, specifically, caught me off-guard. It offer the promise of dramatic change, one of those "nothing will be the same again" as the undersea kingdom falls under her foes. One may wonder why such an important development was relegated to a New Mutants annual which has little impact on the rest of the story, but that minor gripe aside, I enjoyed the moment.

Unfortunately, “Attacks” also gets a little sloppy, especially regarding one subplot...or would that “sub-Mariner-plot?” SPOILERS, but Prince Namor doesn’t actually die in the aforementioned explosion. Miraculously surviving, Namor appears twice more as a mysterious, armored warrior who challenges some of Ghaur’s forces. Awkwardly, these appearances are brief and, at the moments they occur, go unexplained. Once you put a few murky details together, you can tell the new warrior is obviously Namor, but the writers don’t help much. Hurting this subplot further is that the artists draw each depiction of armored Namor differently, assigning different colors to the armor he wears, as seen in the below photos. Additionally, Namor’s triumphant return to the living isn’t all that triumphant. He sort of just...appears? He just pops in the heat of battle in the story’s final issue, as if the writers remembered, “Right, right, we gotta bring Namor back!” As far as subplots go, this one sinks to the bottom of memory for most of the event, floating to the top only when convenient. 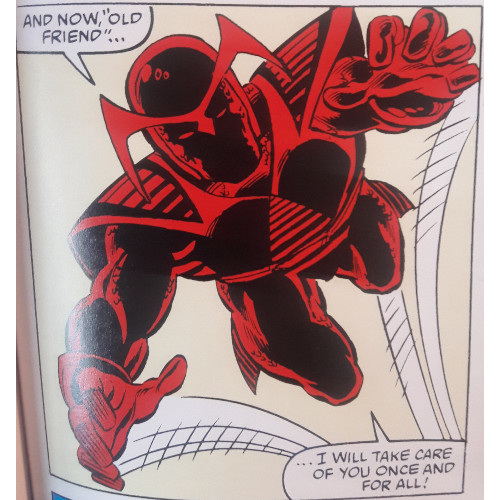 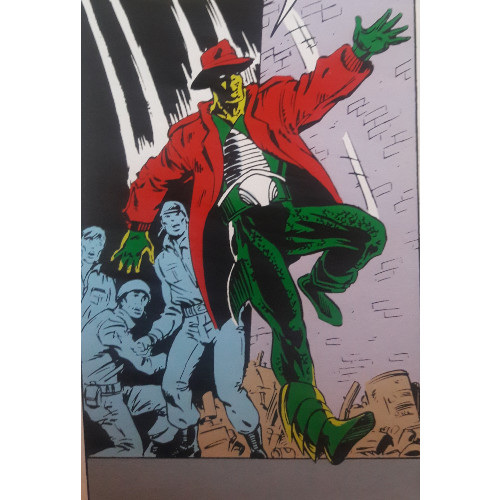 Our pal Spidey tags along for a handful of of his own annuals (and a Daredevil annual), written by David Michelinie and Gerry Conway, the then-current writers of Amazing Spider-Man and Spectacular Spider-Man, respectively. Spidey's inclusion feels a bit more tighter than his involvement in "War"--I complained, in that story arc, how Spidey's role felt randomly inserted, particularly as the character never seemed to connect the events of any of the three annuals he appeared in. Here, Spidey feels a little more at home with the material, as his involvement sort of carries over between the issues. The Daredevil annual immediately follows the Spectacular Spider-Man issue, providing Conway some nice connectivity as he strings along a Spidey-centered subplot. Our hero isn't involved a ton in these stories overall, but he certainly is more impactful. Heck, the guy's front-and-center for the culminating attack by Atlantis (hence the crossover's title), an action-packed romp which, after several issues of build-up, is certainly a welcome breaking of the dam. Conway, in particular, nails the character's voice, providing some of his strongest work on the hero outside of some of his regular SSM contributions. 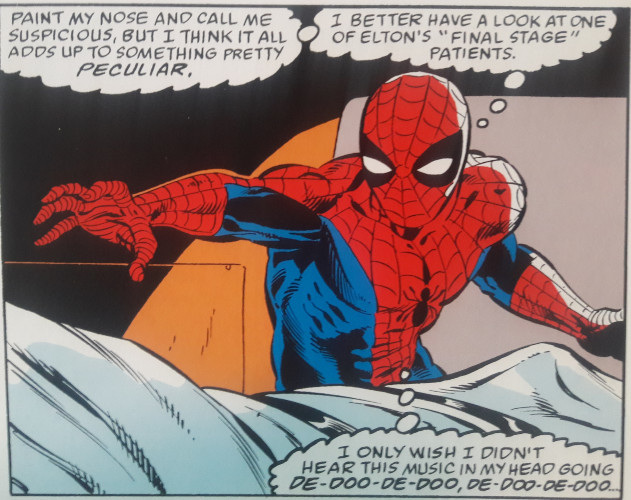 Much like “War,” each issue comes with a brief backup strip. Whereas Mark Gruenwald focused on the history of the High Evolutionary during “War,” Peter Sanderson and a few artists detail the evolution of the Serpent Crown, this crossover’s MacGuffin. Much like Gruenwald, Sanderson tethers the Crown’s creation to deep Marvel lore, going back all the way to the creation of the world as he pulls in a variety of historical comic events. Several of these I was unaware of or not familiar with, but even I was able to understand what was going on, primarily as Sanderson edged closer to the present (of 1989). These portions are generally well-told, giving the Serpent Crown’s story a Lord of the Rings nature the rest of the crossover neglects. Sanderson presents the crown as this all-consuming artifact, constantly looking for hosts to simultaneously empower and corrupt. The idea becomes intriguing, especially as Sanderson moves through history, and I wondered how many events he connected the Serpent Crown to that weren’t originally intended to be attached to this bauble. Whatever retcons Sanderson initiated seem plausible, or at least not bad enough to cause me any real discomfort or confusion.

“Attacks” isn’t great, nor is it a story I would chalk up as being overly ambitious in how it presents it’s multi-chapter crossover event. The writers and artists here, in some respects, seemed to have identified the pitfalls of “War” and done their best to readjust; the result is a more coherent plot where some characters can justify their appearances better than others and where certain characters actually do manage to “cross over” with one another. Yet, despite these course corrections, problems still remain, including a weak subplot that should have become one of the more standout reasons to read this crossover. I mean, come on, guys. You’re some of the masters of Marvel! You should be able to tell if Prince Namor wears red or green armor! “Attacks” is certainly an improvement over its predecessor, but it nevertheless ends up doggy-paddling to shore instead of delivering a strong, Michael Phelps-ian performance.