Old ideas jostle for supremacy with new plots, often winning out against these jumbled original concepts 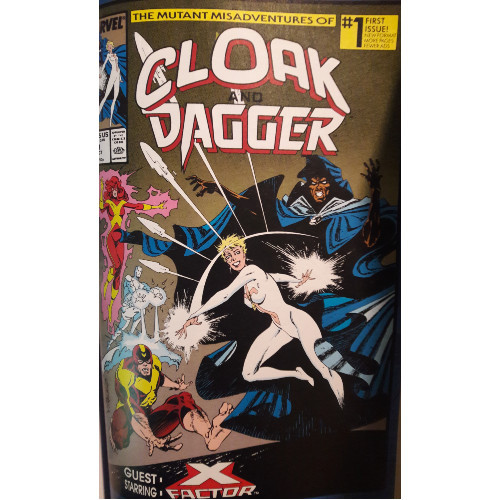 In October of 1988, Cloak and Dagger’s second series Strange Tales (which they shared with Dr. Stephen Strange) was cancelled; that same month, their second standalone series, The Mutant Misadventures of Cloak and Dagger, kicked into high gear. Eventually dropping the “Mutant Misadventures” part of the title, this technically-third series continued directly where Strange Tales left off--same story, writer, penciler--tying up a cliffhanger before continuing on its merry way.

Recap for you fine folks: we know that Cloak and Dagger were runaways injected with an experimental drug, which either gave their abilities or activated previously dormant mutant powers. We also know they’re pursuing an arch-foe, Mr. Jip, and were recently deprived of an ally, Father Delgado of the Holy Ghost Church (because he’s crackers). That’s a very brief summation to bring y’all up to speed.

Our lady of light and dude of darkness face a whole lot in this series, so let’s cracking before I forget what happens. 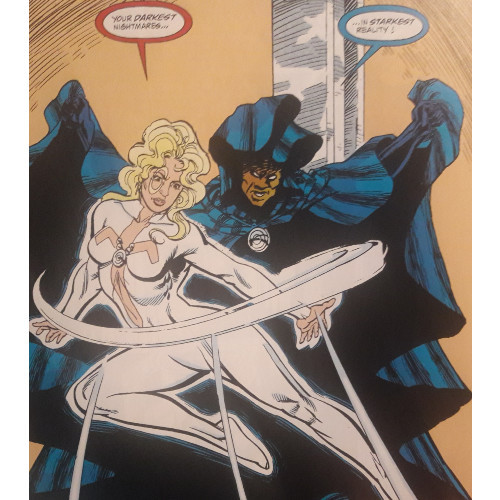 Writers have flip-flopped on the duo’s status--they either received their powers from experimental drugs or had latent powers born from the drugs. Currently, I believe, the characters are not mutants. But in the late 80s, the powers-that-be seemed to want to establish the characters as mutants, absolutely...probably because the X-Men were so dang popular, what with their multiple titles like Uncanny X-Men, New Mutants, and X-Factor, and crossover story arcs like “Inferno.” Why not continue broadening the mutant horizon by retconning Cloak and Dagger as genetically different superheroes? 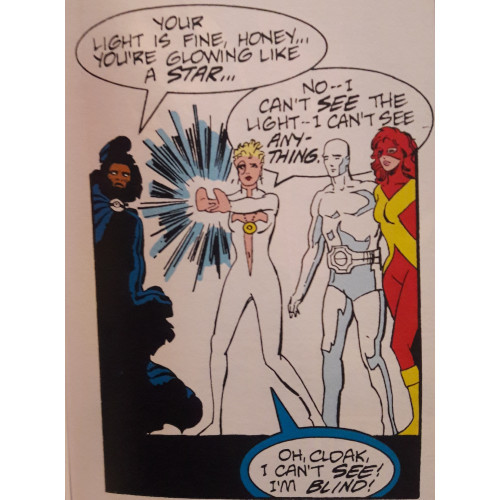 It would...if writers actually used it as a plot point. I don’t mind Cloak and Dagger becoming mutants, but writer Terry Austin (who scripts the bulk of the series) does absolutely nothing with that particular plot development. He brings it up momentarily, largely to get X-Factor involved in a brief story arc that he started in Strange Tales. From there, “Cloak and Dagger are actually mutants” is only ever briefly mentioned again, adding nothing to a series that has “Mutant Misadventures” in its title for nine issues (which, from the start, feels like a misnomer, as their "misadventures" aren't caused or directly related to the possibility of them being mutants). Cloak and Dagger don’t discuss their possible mutant heritage or how it affects them; they don’t suddenly become objects of ire for a public who denounces and hates mutants. You think Cloak and Dagger being mutants would cause something to happen...but nothing ever does. The fact dissipates like a breeze.

Over the course of the series, Austin is infamous (in my mind only, I assume) for behaving like this: seeding dramatic plot points and doing very little with them by time his run on the book ends. He introduces new character Crimson Daffodil, a swashbuckling rogue who undergoes a change of heart and appears for a single issue to rescue Dagger before leaving abruptly. Austin also throws in a whole team of heroes, based on X-Factor, who run around for a single issue before popping off, swearing to follow some dramatic heroic creed before never being seen again. More egregiously, Austin plays with the absolutely fantastic idea that Cloak’s cape and role--as guardian of the “Dark Dimension” which houses the demon Cloak feeds--were possessed by at least two other people before Cloak found the cloth; these are dropped as genuinely engaging plot twists, but alas, Austin does nothing with either individual. There are hints of amazing ideas that Austin weaves into this series, yet regrettably, none of them are explored adequately. New developments such as these could have taken the series in radically dramatic ways--is Cloak the next in a long line of dimension guardians? What purpose does he serve? And how does Dagger factor in?--but Austin’s potential purposes never reach fruition. 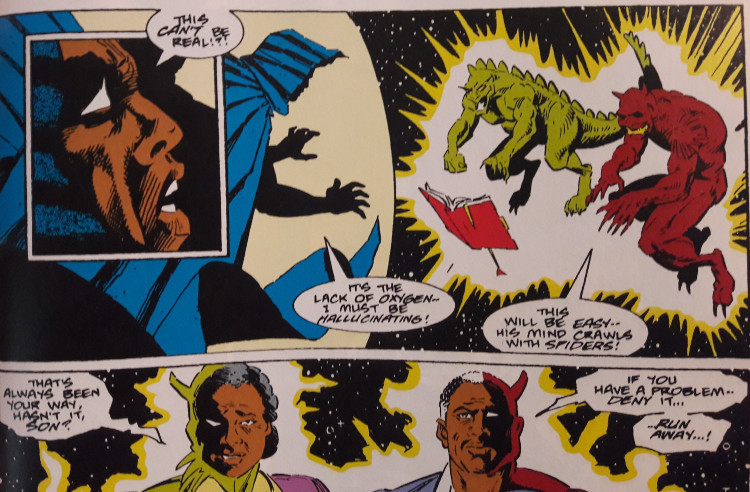 Austin’s mishandling of certain developments could be attributed to, in part, the crossovers he and other writers insert into the series. Cloak and Dagger become entangled in no less than three overarching Marvel crossover arcs--”Inferno,” “Acts of Vengeance,” and the Infinity Gauntlet limited series--and as I’ve noted with other stories, these mega events steer the series into choppy waters. Suddenly, Austin and others are forced to pair their ongoing story arcs with these wider events, dramatically reducing potential character development. To his credit, Austin uses the “Inferno” tie-in at least to create some engaging conflict, but an argument could be made that he could have done this just as easily without surrendering some of his page count to “Inferno.”

Other writers fare no better as the series winds down. Gerber and Kavanagh, in particular, seem to be scrambling once Austin closes a longer story arc he wrote, leaving the title in their somewhat capable hands. A fairly intriguing tale involving ritualistic murders and mysterious cults takes a turn for the worse once Mephisto, who starred in Infinity Gauntlet at the time, appears. Spider-Man and Ghost Rider pop in as well, making the final issues a bit of a jumbled mess. You get the sense that Gerber and Kavanagh are building towards some exciting culmination to the series, and a rather surprising revelation in the series’ final issue seeks to end Cloak and Dagger on a high note. The twist itself is highly engaging, yet the bizarre last-minute retcon the writers weave in reduces a potentially powerful development to little more than momentary shock. The twist itself is great, really great, seeking to reinvent the characters, or at least radically alter readers’ perception of Cloak and Dagger as a whole. If the twist had been foreshadowed earlier, or if the impact had remained, I would praise it. As it stands, this final development feels last minute, becoming lost in the rush to wrap up the series. 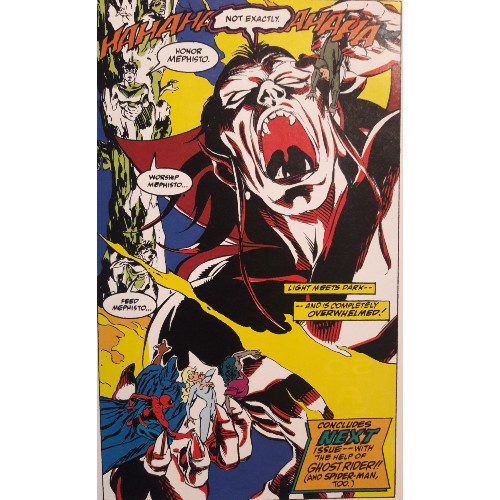 Speaking of “wrapping up,” Austin is to be commended for how well he ends his own long-running plot (and subsequent subplots). When he took over the series, Austin picked up threads Mantlo introduced: the villainous Mr. Jip, his evil lackeys, and the hold Jip held over the mad Father Delgado. Austin brings that narrative to its epic conclusion, weaving several issues of engaging, frantic action, bizarre plot developments, and interesting characterization. He stresses Cloak and Dagger's relationship, inserting a potential challenge to Dagger’s affections for her friend; brings back Detective Reilly, the mutated anti-hero known as Mayhem, for some significant portions; blinds Dagger for several issues, allowing her to face struggles and trials outside of her superhero identity; and ends the story satisfyingly, tying up loose ends and bringing the whole thing to a dramatic close. Even if his attempts at crafting new conflicts and characters feels stilted, Austin never loses sight of his overarching plot, giving some of Bill Mantlo’s original ideas (and some of Austin’s own) a proper sendoff. 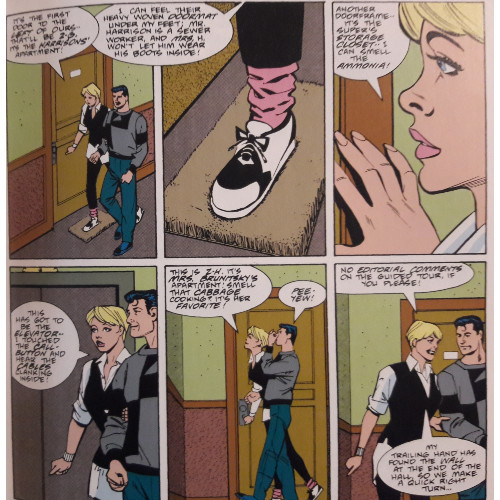 We’re left with a jumbled series, if one examines it from beginning to end. Austin handles the plot he started in Strange Tales fantastically, ending the whole story on a dramatic high note that sees some highly entertaining character development--Dagger’s tribulations as a young blind woman lend her a significant amount of empathy as she learns to “see” the world anew, and Cloak’s own wavering affections for Dagger and a new friend feels dramatic and relatable, not just shoehorned in to add unnecessary conflict. Austin suffers some issues when trying to insert new concepts and conflicts, toying vaguely with fascinating ideas that wind up going nowhere. Other writers’ attempts at adding conflict lead to some weird, weird twists, one of which should provide an engaging look into our characters but instead paints an all-too-brief picture of the way things could have been. More often than not, this series promises stories and ideas that it fails to capitalize on completely. In chunks, Austin weaves in some fun smaller tales loaded with development, but when you look at the series as a whole, you find something a bit more disjointed, falling prey more often to Cloak’s darkness with not enough of Dagger’s light to balance out the impurities.